Coronavirus-shaped cakes and cupcakes are popping up in fine-dining restaurants, bakeries and home kitchens around the world 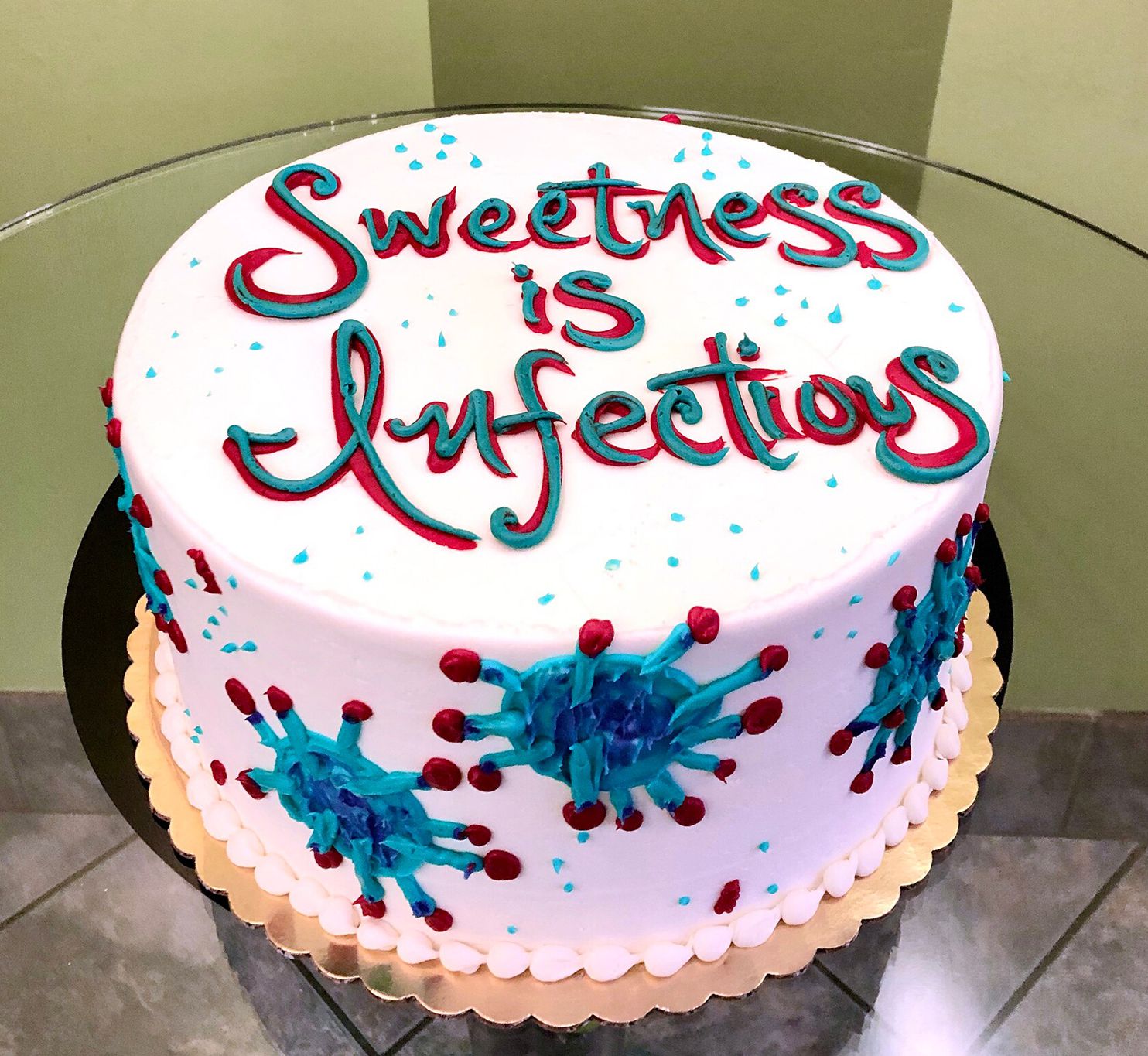 This week, a sweet dish offered by the Michelin-starred Chicago restaurant Alinea stirred a bitter controversy.

Some on social media were outraged by an image of a canape, apparently fashioned out of custard, Szechuan peppercorns and freeze-dried raspberries, made to look like a blown-up image of the novel coronavirus, according to local news outlet Block Club Chicago. The reviews, based on an image originally posted by a patron who thanked the restaurant, were mostly damning: “unbelievably disrespectful,” one critic wrote.

Alinea Group co-owner Nick Kokonas went on the defensive about the dish, which was served at a rooftop pop-up the restaurant is running during the pandemic. “Art is meant to provoke discomfort, conversation, and awareness,” he responded on Instagram. “Everyone on here saying we are oblivious need to think just a single level upwards.”

But confections in the shape of the deadly virus aren’t new, and they aren’t just the high-concept creations of high-end kitchens. Novelty cake and cupcake makers all over the world — from local bakeries to creative home crafters — for months have been sculpting buttercream and fondant and candies and food coloring into approximations of the microscopic germ that has commanded the planet’s attention.

[‘There is no playbook’: Restaurants are closing again after workers test positive for coronavirus]

In dozens of images posted all over Pinterest and Instagram, many appear to be based on a widely shared illustration offered by the Centers for Disease Control and Prevention. Tufts of red icing, shards of rock candy, or stubs of Twizzlers might form the spikes emanating from a blue-tinged sphere, which the CDC notes “impart the look of a corona surrounding the virion.”

Other baked goods seem modeled on various Internet images of the virus, some portrayed in vivid green or bright blue; others take liberty, shading their versions in softer pastels. Many cartoonishly anthropomorphize the virus, giving them googly eyes and emoji-like faces. Those virus-creatures might sport graduation caps; many wear masks. They are often accompanied by sugar-rendered iconography of the Covid Age: rolls of toilet paper, bars of soap, the comforting visage of top infectious-disease expert Anthony S. Fauci.

The combination might seem jarring: cakes and cupcakes are for celebrations, after all, of birthdays and anniversaries and graduations. Meanwhile, the coronavirus is the ultimate unwelcome party guest, a deadly force that has upended lives, costing millions of jobs and more than half a million deaths worldwide.

But Erica Elia, the owner of Classy Girl Cupcakes in Milwaukee, says the cakes — she offers a line of several dozen “quarantine” models featuring motifs of life in lockdown, from wine bottles to canned foods to Amazon packages — just reflect the way we live now. Elia’s started when a customer requested a cake for a friend in the shape of a canister of Lysol disinfectant wipes. At the beginning of the coronavirus lockdown, the cleaning product was nearly impossible to find in stores, and so her customer thought it would make a funny theme. “So it started with the panic-buy items — toilet paper, hand sanitizer — and then we got into pantry foods,” she says.

Then another client commissioned a cake with the virus depicted in icing, with the caption “Sweetness is Infectious.” She worried a little about adding this one to the lineup, she says. She didn’t want to give people the wrong idea, that they were trivializing the pandemic. Her bakery is going above the restrictions required, offering masked curbside pickup only.

It’s helped business, too, at a tough time — coverage in local news drew attention, and Elia figures her bakery has made a few hundred of the cakes. These aren’t cakes for parties, she notes. Customers are mostly ordering smaller ones, 4- and 6-inchers, that are good for families.

The people creating and digging into these sweets seem to have a variety of inspirations. They need a laugh, or an artistic challenge. They may be capturing an instantly recognizable emblem of our shared experience. And perhaps it’s even a way of taming the virus, if only in the form of sugar.

“Its fair to say I wanna smash this Germ!” read the caption on a photo of another lifelike coronavirus replica topping cupcakes posted by Angie Higgi, a baker in Thousand Oaks, Calif. “Stay Home. Stay Safe. Stay Sweet,” she wrote.

And plenty of home cooks are creating their own versions, too.

Amanda Taylor, a blogger in St. Louis, Mo., came up with the idea for coronavirus cupcakes for her daughter’s 12th birthday this spring. Like many people around the country, her family was under a stay-at-home order, unable to celebrate with family and friends because of the virus.

So she proposed “turning it around” and creating cupcakes to “make something silly” out of the grim situation. She made basic cupcakes, and poked little bits of Twizzlers into icing. Her daughter helped. And it lifted their moods, she says, as they admired their creations and delivered packages of them to the doorsteps of the people who they couldn’t invite over. She posted the recipe on her blog, called Survival Guide by the Working Mom, and enjoyed seeing friends share photos of their deliveries.

She’s taking the virus seriously — it sickened three of her relatives, who have since recovered, and caused her husband to be furloughed from his health-care job. Still, she says, a little levity is in order these days.

“It’s the only way to get through these times,” she says. “You’re either going to laugh or you’re going to cry.”

Black chefs have overcome countless obstacles. This might be the hardest yet.