In Slovenia, statue of Melania Trump set on fire and removed 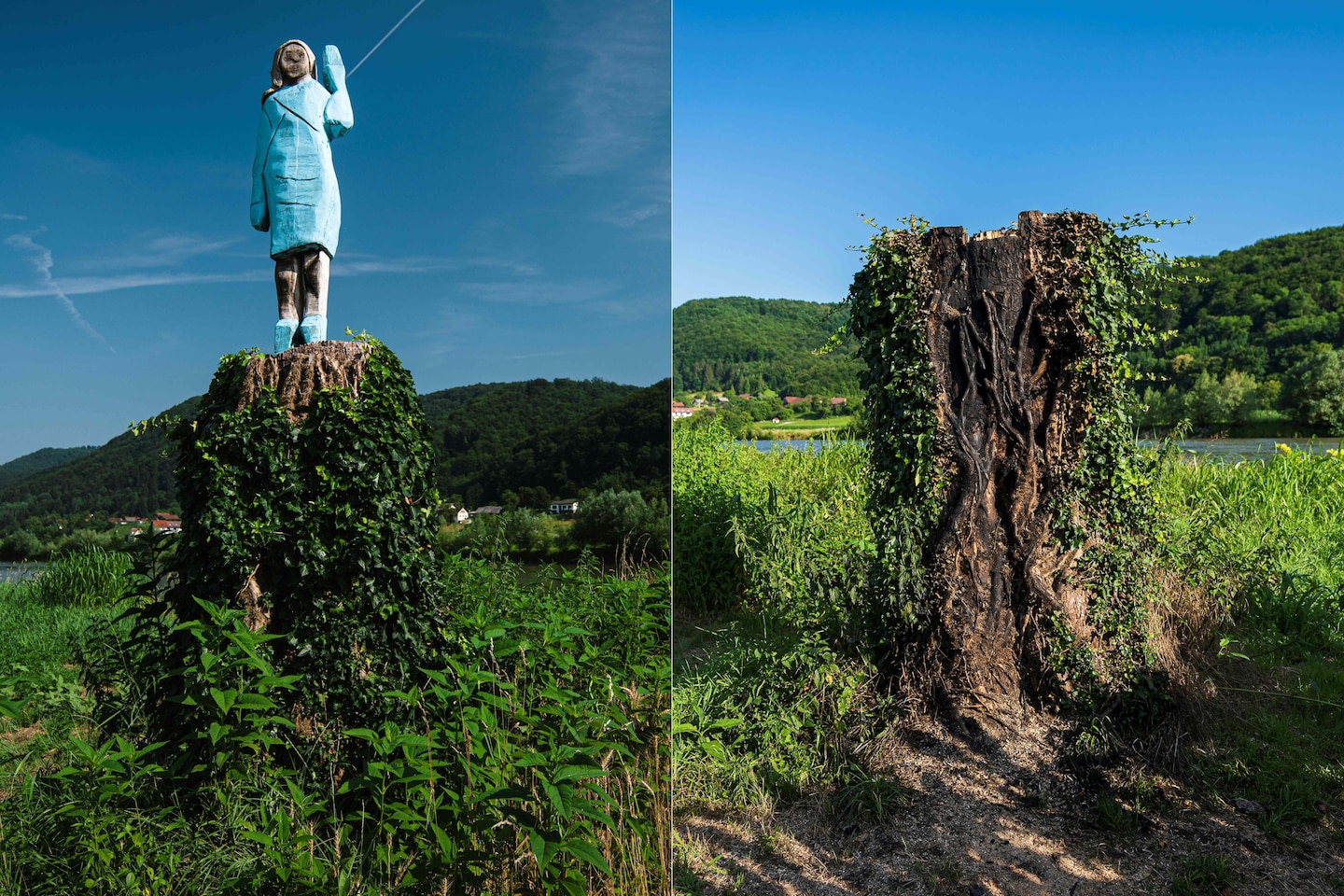 The defacement came the same day President Trump delivered a speech in the shadow of Mount Rushmore, a monument to U.S. presidents, decrying the vandalism of public sculptures by protesters seeking to confront racism.

The Melania sculpture, which depicts the first lady clad in a blue dress, with a scrunched face, a unibrow, pursed lips and chunky limbs, drew mixed reactions upon its unveiling last year.

Nobody, including the art gallery that presented it, seemed to know if the statue was a parody or meant to be taken seriously, The Washington Post reported at the time.

Some locals compared it to a Smurf, or noted that the blue garment looked similar to the powder-blue suit Melania wore on Inauguration Day in 2017.

“I think that’s the beauty of it, that nobody can answer the question: Is it serious? Is it a joke?” German curator Lukas Feireiss, who has studied the work of Brad Downey, the American artist who commissioned the piece, told The Post. Sculptor Ales Zupevc carved the figure.

Police in the country said an investigation is ongoing. Downey told Reuters he wanted to talk to those responsible.

Weeks after the statue of the first lady was erected last year, a controversial 25-foot-tall depiction of President Trump featuring a rather stern-looking face, yellow shock of hair and red tie also popped up in Slovenia but quickly came under threat by people vowing to destroy it.

The torching and removal of the Melania carving July 4 came amid a wave of statue toppling that began during protests in the United States and spread around the world, along with a push to confront rather than monumentalize histories of violence and oppression.

Across the U.S., many Confederate statues have been pulled down in recent weeks, amid demonstrations against racial injustice and police brutality.

In Britain, demonstrators who gathered at anti-racism protests across London called on the country to confront its role in the slave trade and defaced a statue of wartime leader Winston Churchill, calling the former prime minister racist. Seeking to protect the statue, officials placed the installation in a protective wooden box.

In Bristol, Black Lives Matter protesters toppled a statue of 17th-century British philanthropist, politician and slave trader Edward Colston, and dumped the monument into a harbor as onlookers cheered and shared video to social media.

Last month, President Trump said he had signed a “strong” order to protect monuments in the country as protesters gathered near the White House calling for the removal of a statue of former president and slave owner Andrew Jackson, known for his harsh treatment of Native Americans.