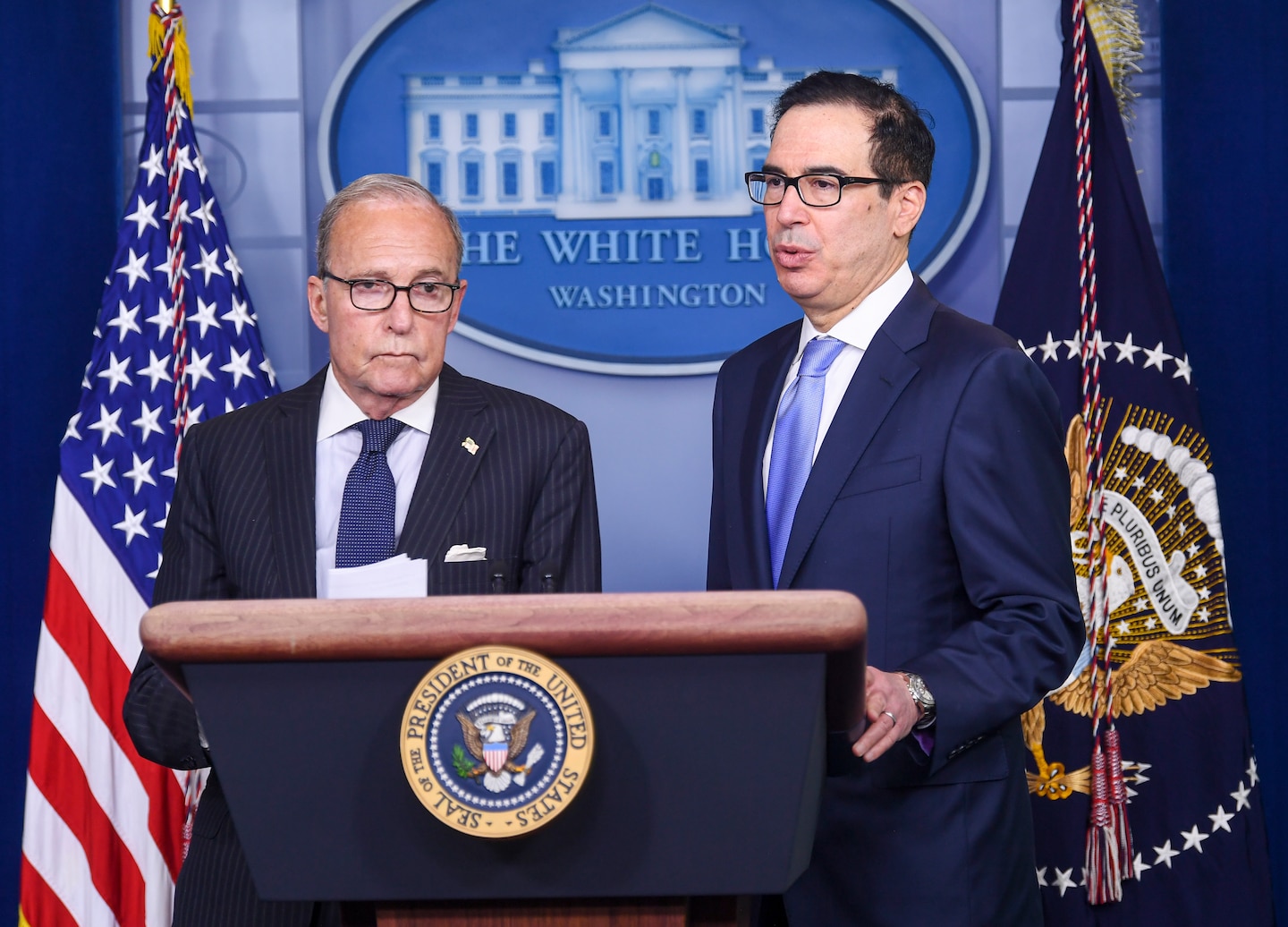 More than 30 million people are collecting what many recipients say is a crucial pillar of financial support right now.

“We’d basically have to choose between paying bills and eating,” Erin Walker, 48, who was furloughed from her job as a dining manager at a college campus near Summerville, S.C., at the end of April, said about the looming expiration of the benefits. “I honestly don’t know what I would do.”

For months, President Trump and White House officials have argued the $600-per-week unemployment bonus provides a disincentive to work and should be scrapped so that more Americans return to work as part of the economic recovery. But with the benefits soon set to expire and the economy showing new signs of strain, Trump administration officials have begun opening the door to accepting a narrower version of what Congress previously approved.

Treasury Secretary Steven Mnuchin said on CNBC last week that the administration’s priority was ensuring that future benefits amount to “no more” than 100 percent of a worker’s prior wages. Mnuchin’s comments surprised some congressional Republicans who thought he shared their strong opposition to extending the benefits, according to two people who spoke on the condition of anonymity to describe internal dynamics.

Kudlow also pushed a “return to work” bonus that could supplement a reduction in unemployment benefits. That idea has been viewed as administratively difficult to implement and its path to passage is unclear, according to three lobbyists and congressional aides aware of internal conversations.

One potential compromise discussed by Republican lawmakers would involve cutting the unemployment benefit from $600 per week to between $200 and $400 per week and making up at least part of the difference by sending another round of $1,200 stimulus payments, these people said.

On Monday, Senate Majority Leader Mitch McConnell (R-Ky.) said the next package would include “unemployment insurance for those unable to get back to work,” though did not identify how much aid would be necessary.

White House spokesman Judd Deere said in a statement that the administration is opposed to the $600-per-week increase but would not rule out the administration agreeing to a more limited expansion of the benefit. Maintaining unemployment insurance benefits at current levels “does not incentivize returning to work,” Deere said in an email. “UI reform is a priority for this White House in any phase four package and we are in ongoing discussions with the Hill.”

The emergency, temporary federal benefits come on top of the payments appropriated by state governments, though those benefits vary. Democrats have largely called for the benefits to be extended.

Lawmakers will have little time to resolve the competing positions. Republicans have discussed the issue internally but have not reached a caucus position on the matter. There are no serious bipartisan discussions underway to resolve the impasse. The Senate comes back in session on July 20, five days before the enhanced unemployment benefit expires in 49 states. They expire in New York state on July 26.

“They don’t have time, which is what is very scary about all this,” said Bill Hoagland, senior vice president at the Bipartisan Policy Center and former Republican staff director for the Senate Budget Committee. “It’s very irresponsible.”

Trump has offered little clarity on his preferred outcome, saying on Fox Business last month about the benefits: “We had something where they wanted where it gave you a disincentive to work last time. And it was still money going to people and helping people, so I was all for that. But we want to create a very great incentive to work. So we’re working on that, and I’m sure we’ll all come together.”

Compounding the potential for economic disaster is that the labor market shows continued signs of severe stress.

More than 1 million Americans continue to apply for jobless benefits every week, and the rise of coronavirus cases across the country threatens to prompt a new wave of shutdowns. There are still 1.6 million fewer job openings than there were in February — although they rose slightly in May — raising the question of whether many Americans have a job to return to.

June’s jobs numbers showed the United States has recovered about a third of the jobs it lost during the worst of the coronavirus crisis. But the economy appears to have worsened in the weeks since, and there are few signs it will improve before expanded unemployment benefits expire. From March through June, the United States saw a steady decrease in the share of households that expected their income to fall within the next month — from 39 percent to 31 percent, a weekly census survey showed. But by the end of the June, 34 percent of Americans — more than 1 in 3 — reported that they expected to see their income fall in the coming month.

The unemployment benefits helped stabilize the economic turbulence as the unemployment rate rose to roughly 15 percent in April before falling slightly to 11 percent in June. Americans made $70 billion less in wages and salaries in May compared with February, reflecting lost jobs and cuts to hours and wages. Emergency unemployment benefits filled that gap, funneling $70 billion per month into the economy, according to Ernie Tedeschi, who worked as an economist in the Obama administration’s Treasury Department.

Tyler Kemp, an unemployed 38-year-old who lives with his mother in subsidized housing in the Las Vegas area, said the benefits allowed him, for the first time in a long time, to feel as if he has a financial cushion, should he or his mother have any unforeseen medical expenses, for example.

“If that stuff expires, it means that I won’t have any money for emergency things,” he said. “It’s like a security blanket that hasn’t been there for so long.”

Removing that lifeline could spell hardship for millions of Americans. More than 30 million Americans would see an income cut of between 50 percent and 75 percent if the benefits go away, Tedeschi said.

Darrick Hamilton, an economist at Ohio State University, said letting the benefits expire “would make the recession deeper, longer and more entrenched. You will get into a downward spiral as people lose their income to pay their bills, which will affect the people who collect income on those bills as well.”

“The way to prevent depression and recession is to keep aggregate demand up,” Hamilton said. “We also need to stop people’s suffering and pain.”

A recent analysis of daily data by economists at the University of Illinois, University of Chicago and University of California at Berkeley found no relationship between the generosity of a state’s benefits and the rate at which its citizens are returning to work during the coronavirus crisis.

Conservatives have argued the unemployment benefit makes it more lucrative for workers to stay at home than return to their jobs. In most states, the size of the unemployment benefit is equal to or greater than the minimum wage. Even some Democrats on the Senate Finance Committee have privately expressed concern about the potential for the benefit to disincentivize work, The Washington Post previously reported.

“From numerous conversations with people at the White House — they do understand redoing this $600-per-week benefit would be really bad for the economy and really bad in the fall, when you need the recovery,” said Stephen Moore, a conservative analyst and White House ally. “The stakes are really enormous here.”

Moore, citing conversations with multiple small-business owners, described talk of taking the benefit down to $200 per week as “very objectionable.”

“We should just go back to the old unemployment program, and if you want to help people financially just do the payments that go to everyone,” Moore said.

But with the pandemic still raging in many parts of the country, it is not clear whether it is safe to return to work in some places. In interviews, many workers said that the money provided a different incentive — for those living with sick or at-risk family members or with health conditions themselves to prioritize health concerns instead of being pushed to look for more risky work for a paycheck.

Addie Peterson, 21, was working part time at a PetSmart near her home in Eugene, Ore., before she was let go at the end of March. She has cystic fibrosis; her lungs work at only 44 percent capacity, she said.

“It’s a very personal decision. I can’t risk my lungs by going back to work,” she said. She added of the unemployment benefits, “While it might for some people make them feel like they can just stay at home, there are a lot of people who genuinely need to stay home right now, to keep themselves and their families safe.”

Adding further danger to the expiring benefits is the simultaneous expiration of eviction moratoriums in many parts of the country. About 26 percent of Americans have missed a rent or mortgage check or expect to miss the next one — the highest figure reported since the Census Bureau began keeping track in late April. In hard-hit Houston and Miami, more than 40 percent of households now struggle to pay the rent or mortgage.

In another weekly survey, this one sent to small businesses, the bureau found that the share of businesses that have cut employees in the past seven days has risen for two straight weeks — and as with the other trends, this worrying rise came after months of steady improvement. The rise in job cuts was sharpest in low-wage service industries that are most exposed to the resurgent pandemic.

Many workers are left in a state of unparalleled uncertainty. Walker, the former dining manager, said that supplemental insurance was all that was keeping her rent and expenses paid. She and her partner, who also lost his job recently, pay about $2,400 a month for rent, cellphones, a car payment and utilities — a sum that is going to be hard to match on the $260 week he would make, after taxes, on South Carolina’s unemployment benefits alone.

“That’s not including groceries,” she said. “There’s absolutely no way to make that math work.”

Walker said she found it hard to even think about the choices she would have to make if the benefits were allowed to expire should she remain on furlough.