White House backs away from Fauci attacks days after promoting them 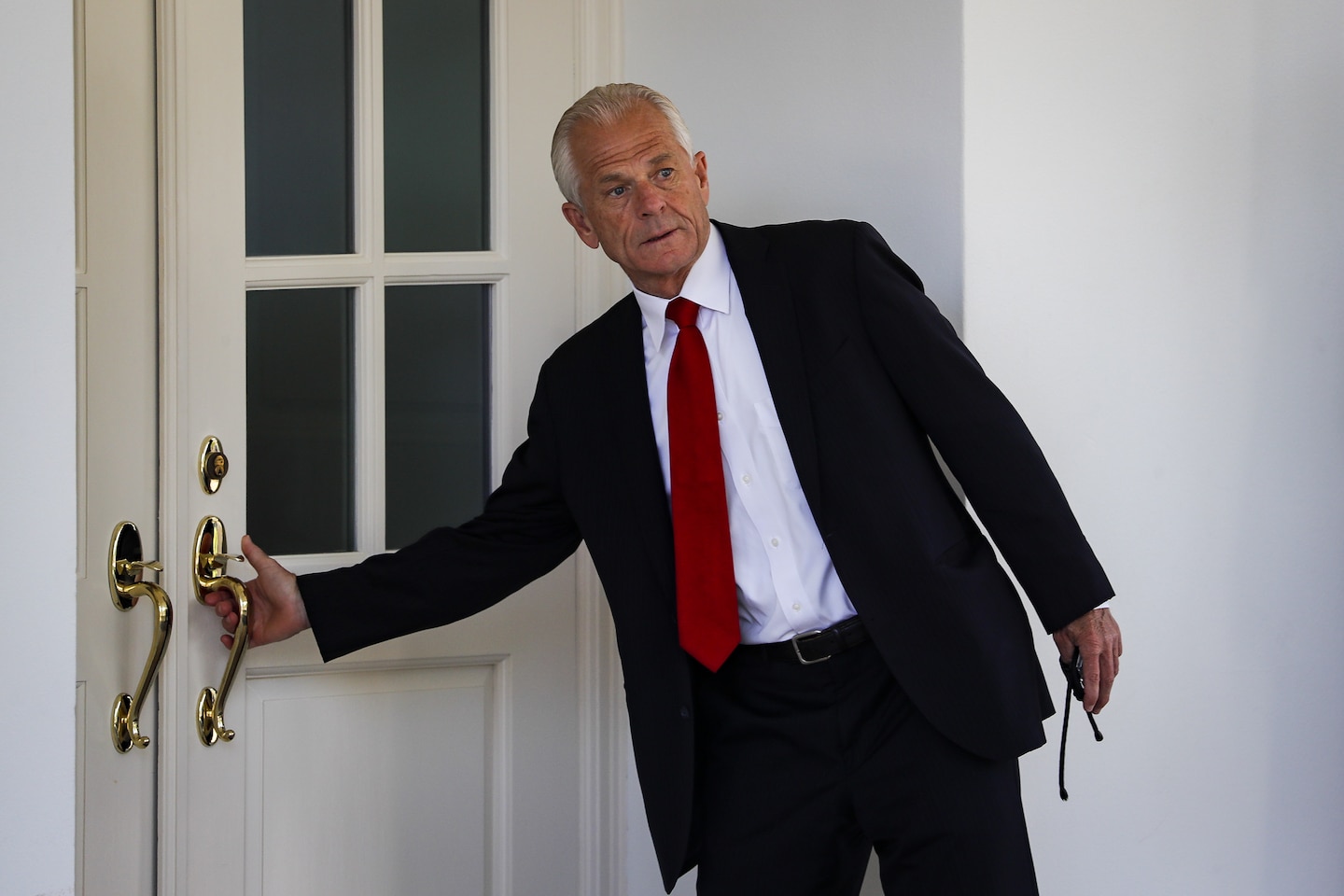 Trump chided Navarro on Wednesday for the opinion piece, which ran under the headline “Anthony Fauci has been wrong about everything I have interacted with him on,” and the White House released a statement saying the article was unauthorized. Fauci told the Atlantic that “I can’t explain Peter Navarro” and that “he’s in a world by himself.” White House officials anonymously told reporters that chief of staff Mark Meadows was “fully engaged” and found Navarro’s behavior “unacceptable.”

The extraordinary moves illustrated how a White House known for dysfunction and internal drama has come to realize that there is little appetite among the public for such qualities in the middle of a health crisis that has decimated the economy. Even Trump, who has long courted controversy and intrigue, publicly complained about the lack of discipline among his aides.

“He made a statement representing himself. He shouldn’t be doing that,” Trump said of Navarro as he spoke with reporters before departing the White House for an event in Georgia.

The White House effort to disavow Navarro’s op-ed came despite moves in recent days by Trump and senior administration officials to raise questions about Fauci’s credibility, including by giving reporters a list of instances in which they alleged Fauci had been incorrect about aspects of the pandemic.

“I cannot figure out in my wildest dreams why they would want to do that,” Fauci said. “I think they realize now that that was not a prudent thing to do, because it’s only reflecting negatively on them.”

Trump sought to minimize the discord among his advisers.

“We’re all on the same team, including Dr. Fauci,” the president told reporters.

At an earlier White House event, Trump said twice, when asked about the Navarro op-ed, that he gets along very well with Fauci. Navarro has played a role in the coronavirus response, particularly on supply chain issues.

“The Peter Navarro op-ed didn’t go through normal White House clearance processes and is the opinion of Peter alone,” White House spokeswoman Alyssa Farah said in a tweet, adding: “@realDonaldTrump values the expertise of the medical professionals advising his Administration.”

Meadows was not happy with Navarro’s decision to write the op-ed, which came after the trade adviser had been told to de-escalate the rift with Fauci, according to a White House official, who like others spoke on the condition of anonymity to discuss internal deliberations.

Navarro apologized to Meadows on Wednesday morning, according to a senior administration official. Navarro had asked for permission to write the op-ed, and wrote it anyway after being been turned down, according to two officials.

“Peter Navarro’s statement or op-ed or whatever you want to classify it as was an independent action that was a violation of well-established protocols that was not supported overtly or covertly by anybody in the West Wing,” Meadows told reporters traveling with the president to Georgia.

He declined to say whether it was a fireable offense.

The White House declined to say Wednesday if Navarro would be punished in any way.

Despite the White House’s posture, Navarro’s op-ed in some way echoed Trump’s comments during a Fox News interview last week with Sean Hannity, when he said Fauci “is a nice man, but he’s made a lot of mistakes.”

Among the criticisms circulated by White House officials and Navarro is that Fauci didn’t urge caution when the cases were first reported in China in January, that he gave varied advice on masks and that he has said that he didn’t believe there was concrete scientific evidence to support that hydroxychloroquine is an effective treatment against the coronavirus. Navarro has been a vocal advocate of the effectiveness of hydroxychloroquine, an anti-malarial drug, despite the Food and Drug Administration revoking its emergency authorization for the medication after major studies found it wasn’t effective for covid-19, the disease caused by the novel coronavirus.

Dan Scavino, the White House social media director and deputy chief of staff for communications, late Sunday shared a cartoon on his Facebook page mocking Fauci. It depicted the scientist as a faucet spewing cold water on the economy, with phrases written alongside including “Schools stay closed this fall,” “Indefinite lockdown” and “No NFL season.” Scavino, who is one of Trump’s longest-serving and most trusted aides, did not face any public reprimand from the White House for the post.

While Trump has personally soured on Fauci, he has decided that a public feud is not in his best interest, given that Fauci has a higher approval rating than he does, according to an official who spoke to the president. Fauci told the Atlantic that the White House attacks against him had wound up hurting Trump.

A string of polls show Trump with a slumping approval rating for handling the pandemic, which has infected more than 3.3 million Americans and killed at least 134,000. A Quinnipiac University poll released Wednesday showed Biden leading Trump by 15 percentage points, a 52-37 margin that marks the widest gap yet between the two men.

Trump’s political opponents have seized on the public rift between the White House and Fauci. A recent New York Times/Siena College poll showed that 67 percent of voters trusted Fauci for information on the coronavirus, compared with 26 percent who trusted Trump.

The Lincoln Project, a super PAC launched by veteran Republican operatives seeking to oust Trump from office, put out a video ad Wednesday praising Fauci and slamming his critics.

“Now Donald Trump is attacking Dr. Fauci. Why? Because Trump failed America,” the ad’s narrator said. “So he does what he always does — attack and blame.”

Republican lawmakers have been hesitant to follow Trump’s lead in criticizing Fauci, who has served under six presidents during a decades-long career in Washington and received the Presidential Medal of Freedom.

Senate Majority Leader Mitch McConnell (R-Ky.), praised Fauci on Wednesday, telling reporters in his home state that he continued to have “total” confidence in him.

Vice President Pence tweeted out a picture of his coronavirus task force meeting Wednesday afternoon in which Fauci was prominently featured.

One White House official said the administration was attempting to de-escalate the situation with Fauci in the days ahead, a tacit admission that efforts to tarnish his credibility had backfired.

But both allies and critics of the Trump administration fear the White House’s attempts to move on from ill-advised attacks against an epidemiologist during a pandemic could be upended with a presidential tweet.

Navarro, one of the few remaining White House officials who started back in 2017, has claimed to be a true representative of the Trump agenda. He has outlasted many of his rivals and survived previous controversies.

In 2018, Navarro apologized after saying on Fox News that there was a “special place in hell” for Canadian Prime Minister Justin Trudeau, who had clashed with the president on trade. But Trump, who was incensed at Trudeau over a news conference he gave, had actually called for White House officials to publicly attack the Canadian leader on television, former national security adviser John Bolton wrote in his recent memoir, “The Room Where It Happened.”

Trump has often supported Navarro’s pugilistic style and pined for more people to defend him aggressively.

Navarro’s op-ed was a clear example of the kind of forceful, no-holds-barred media engagement Trump has supported during his time in office. Trump has felt under siege in recent weeks, complaining about media coverage and lamenting to friends about the pandemic and social unrest unfolding under his watch.

In the USA Today piece, Navarro praised Trump and criticized Fauci for “telling the news media not to worry” about the coronavirus in late January

He did not mention that Trump also was telling Americans not to worry in late January and for several weeks after, predicting that the virus would “disappear” on its own.

Josh Dawsey contributed to this report.