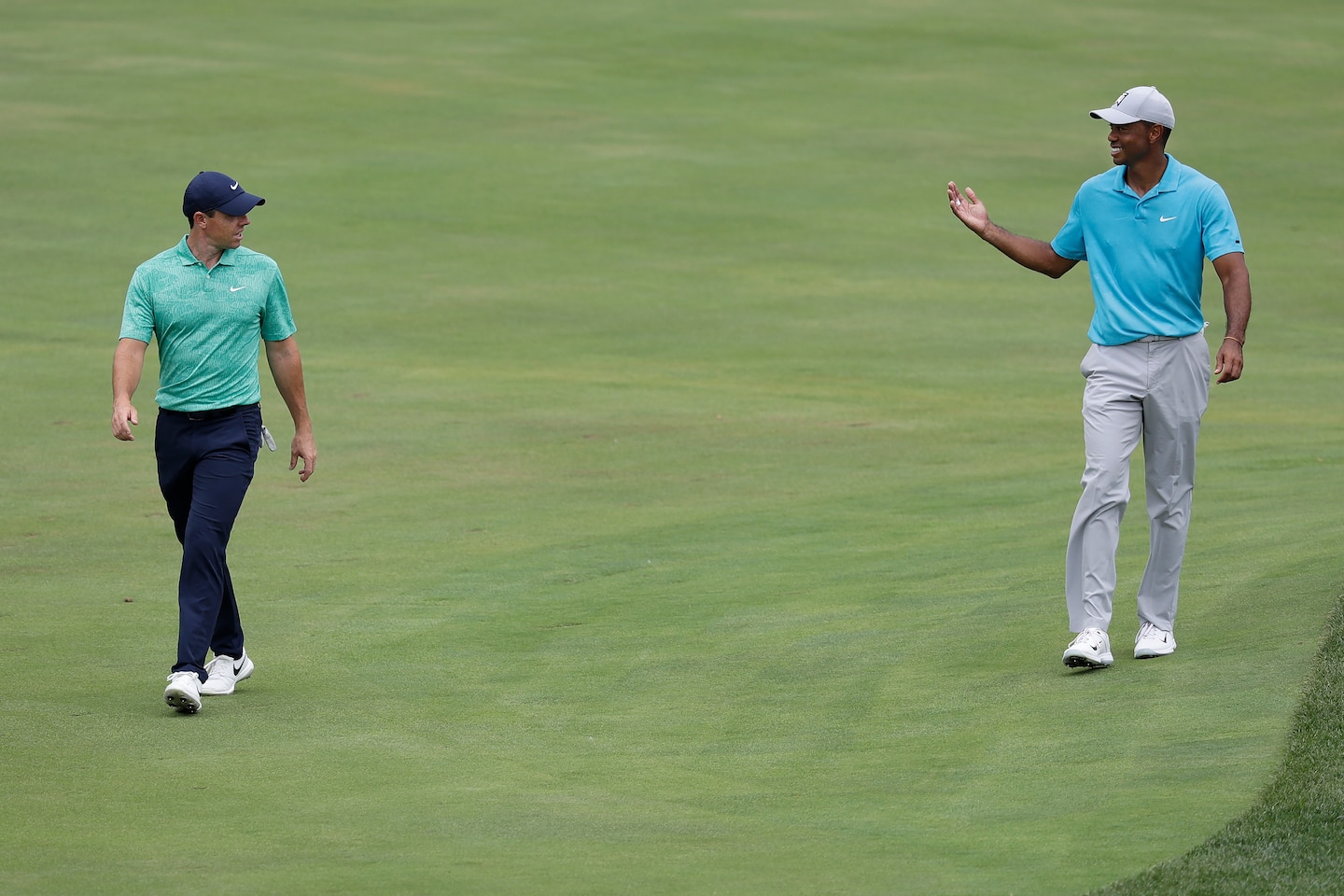 Yet as 2020 keeps churning out sports oddities, there went Woods along his way to a hard 1-under-par 71, waving to those standing behind temporary fences at Nos. 1, 3, 7 and 17 at least — to people who cheered him in measured sounds from verandas, decks, patios and balconies along the Jack Nicklaus creation Muirfield Village Golf Club.

When a spirited group on a balcony beside No. 17 got its unison together to holler onto the course, “We love you, Tiger,” it received a second wave, making it a double.

Unseen in competition since February in Los Angeles, Woods joined his PGA Tour mates and rivals at their sixth go at competition since a 91-day hiatus ended in June, and he joined at an event previously pegged to include a 20 percent ration of spectators. That 20 shrank to zero earlier this month when the tour decided the novel coronavirus still made the worry exceed the hope.

That’s how Woods, surely the tour’s all-time leader in both onlookers and disruptions to the backswing from noise, camera clicks and various levels of inebriation, came to start off at 1:17 p.m. Thursday, make a 10-footer for a birdie on No. 1 and hear almost nothing.

“I definitely didn’t have any issue with energy and not having the fans’ reactions out there,” said Woods, long known as capable of focusing in a manner almost peerless upon the Earth. “I still felt the same eagerness, edginess, nerviness starting out, and it was good. It was a good feel. I haven’t felt this in a while.”

“Nice birdie,” a man said from near yonder behind the fence in a yard.

The man was Tyler Stieg of Dublin, who grew up in the house and has known the Memorial as a bulging part of the calendar since, “Oh, God, since I was 4 years old, so 30 [years] or so,” he said through the fence. And with this the second straight event here at Muirfield Village in the improvised schedule and with Stieg having done some tournament volunteering per usual, he said: “It’s weird. I mean, it’s weird walking out there with a group. You don’t even know how to react sometimes when they make putts. Do you clap or not?”

Sometimes a person does.

Beneath overcast skies and amid trying winds, on went the “loud” group of the day, Woods and Brooks Koepka and Rory McIlroy, the defending Masters champion for 15 months now (Woods) and the defending PGA Championship champion for 14 months now (Koepka) and 23 major titles hogged into the trio (15 for Woods, four each for the others). On they went in the hush, past people behind the fences in groups of two or 10 or 21, people in lawn chairs, kids on bikes in a clearing. They passed stately backyards with mammoth grills on decks, pools with little basketball goals, flowers cascading out of huge ceramic urns, bushes denied their individuality and forced into identical shapes.

They passed No. 4, where two women behind the temporary fence acted as if imprisoned and said, “Let us out!” They passed the empty Out Of Bounds Bar in a tent on No. 5, the bar having become even more out of bounds than before. They passed No. 6, where a woman sat on a lawn with two impeccably groomed yellow Labrador retrievers, both of whom sat without so much as a barked whisper and neither of whom heckled Woods when his approach from some unkind left rough died early on the green, painfully shy of the cup.

They passed No. 8, where a boisterous crew cheered from a backyard to the right, and No. 9, where Jim Kaufman had gone next door from his own house and had stationed at the fence with a 70-300 lens snapping photographs with sight lines unfettered by crowds. “I’m experimenting,” Kaufman said, soon adding, “I get to see a little chunk of it, and I’m watching the rest on my phone,” and, “I’m getting some action shots, which are really good.”

He placed the experience among “cool things to do in the lockdown.”

Along the way, Woods began to notice that the course he has played since 1997 suddenly offered easier walking. “Usually we have marshals and ropes,” he said. “Like, for instance today, 16 and 17, it was nice walking off the 16th green going straight to tee instead of walking around. It’s certainly different around here with some of the walks. But you get from Point A to Point B very directly. I hadn’t ever felt this here. Usually I’m meandering roundabout.”

He and McIlroy (70) and Koepka (72), all trailing by a chunk the 66 managed by Tony Finau, played a course grown more demanding than last week, when 23-year-old Collin Morikawa edged 27-year-old Justin Thomas in a playoff donnybrook.

“It’s not even remotely close to the same,” Thomas said after shooting a 74.

“Yeah,” Morikawa said after shooting a 76, “we started noticing things — I came home Tuesday, and you already saw the greens get about a foot, foot-and-a-half faster, and today when we stepped on the course, even though it was morning you could start seeing a little shine, so you know the first bounces were skipping a little more, getting a little firmer. The rough has obviously just kept growing. They’ve put some water on them. You miss in some spots, sometimes you’ve got to chip out and you never know what kind of lie you’re going to get, but for the most part it’s not going to be good.”

With the task thus consuming, at least Woods didn’t have to cope with the normal commotion, and at least nobody had to endure the common horror of spectators yelling, “Get in the hole,” shortly after a player drives. But some normalcy did appear in the curious presence of an armada of carts — carts for the PGA Tour, for the Golf Channel, for security, for police — that would make anyone wonder whether such carts always proliferate but go unnoticed or have multiplied in the strangeness.

Yet when he birdied No. 18 with a nifty 14-footer, a witness might have heard nothing other than one guy say, “Nice.” And Woods didn’t wave, with the 18th green reaching up toward the clubhouse and featuring no visible backyards.