What’s it like in the NBA’s Disney bubble? For me, hotel room workouts and lots of time to think. 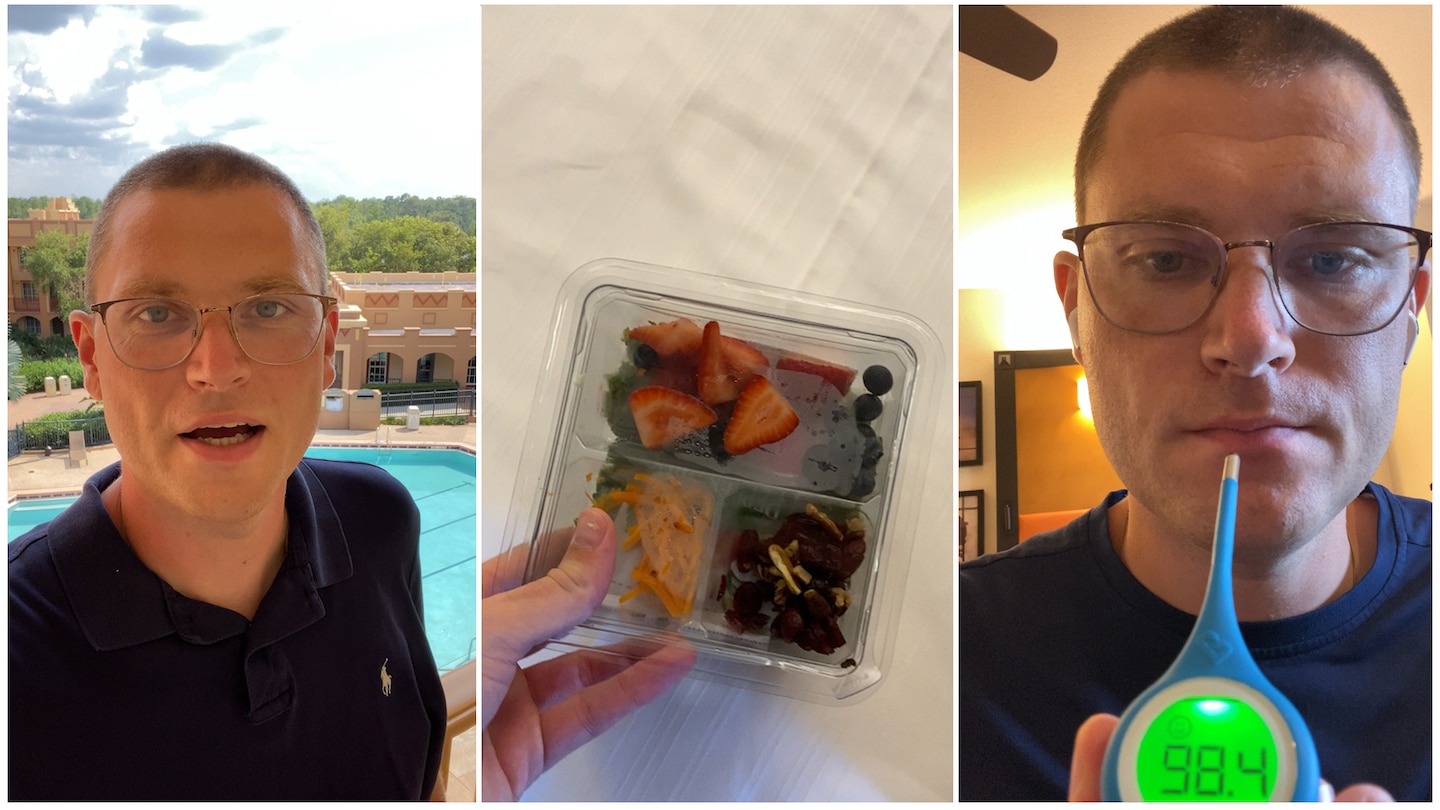 Guests are forbidden. I can hear a few of my fellow media members through the walls, faintly, and hotel staffers walk by every few hours. The more time I spend in this room, the more I ponder Charlotte Perkins Gilman’s short story “The Yellow Wallpaper,” in which the main character, confined to a nursery, slips into delusion and imagines herself trapped within the dingy wallpaper. My room’s walls are white and mostly bare, but my bed’s headboard makes me grimace. Yellow.

This temporary detention has fascinated my friends, family members, social media followers and editors. In my first 48 hours here, I did more than a dozen interviews and received more than 100 supportive notes from around the world. Somehow, more than 185,000 people watched a 30-second tour of my empty room. Are these “How’s it going?” text messages coming from well-wishers or rubberneckers?

I’m not here to whine or complain, especially because this trip cost tens of thousands for room, food, testing and transportation. Like Memphis’s Ja Morant, “I’m not a silver spoon guy.” My hotel room has two beds, a desk, a flat-screen television, stable WiFi, a functional toilet and hot water. Numerous NBA players have questioned the accommodations, but I’ve worked in worse conditions many times.

Truthfully, I’m happy to be back in the field — even if this winds up being a 94-day stay as planned. The NBA’s shutdown in March left me in denial and then despair, worried about the public health crisis and adrift without an NBA calendar to dictate my days as it has for 13 years. Sunrise workouts did little to ease the disruption stress; caring colleagues endured my meltdowns. I am very fortunate that the months passed without health, financial or employment hardship.

But I write a handful of stories and host five podcasts, all exclusively about basketball, every week. As such, I don’t have much else going on. When I applied at The Washington Post, where beat-switching is common, the top bosses floated a hypothetical: “Would you ever want to cover a political campaign?” My tepid response and singular focus raised eyebrows. Sorry, ball is life.

Throughout the four-month shutdown, I privately braced for 18 months without hoops and adopted a public posture that I wanted to cover the playoffs no matter when or where they took place. That commitment was tested when the NBA rolled out its bubble plan.

Fools rush in, so I consulted with a primary care physician, cardiologist and psychiatrist, as well as medical experts inside and outside the NBA. They all assented. I faced accusations of hypocrisy from my parents in Oregon, whom I had guilt-tripped into home isolation in March. Eventually, my mother sewed me some masks and crossed her fingers. There was nothing she could say.

The NBA gave seven days notice that I had been selected as one of 10 independent reporters to live in the bubble, and I received my final health clearance less than 24 hours before my flight from my home in Los Angeles. That nerve-racking week was spent chasing down medical sign-offs and packing for a semester abroad. I booked a one-way ticket — in case the bubble caved — and indulged in atypical comforts like a first-class upgrade and a car service. My mind wasn’t fully at peace, and there were good deals during the pandemic.

I arrived at the bubble Sunday afternoon in good spirits, receiving an NBA-themed Disney wristband that provided contactless entry to my room. Masked writers from the New York Times, Associated Press, USA Today and other outlets mingled at a safe distance before going their separate ways for the week-long quarantine.

To be freed from this room, I must pass coronavirus tests on seven consecutive days. These involve jamming cotton swabs up my nose and down my throat, with results returned 15 hours later on a lab’s website. The NBA’s nonnegotiable rules require that I take my temperature, use a pulse oximeter and answer a symptom survey for unseen doctors each morning through an iPhone app. Forced to choose between my medical privacy and writing about basketball, I picked the latter.

I feel safe here — although the stringent regulations and sprawling campus might contribute to a false sense of security. Florida is a coronavirus hotspot, and I am well aware that careful health monitoring, with timely and trustworthy testing, is a privilege unavailable to many Americans. Each negative test brings relief but also sadness.

Clippers guard Patrick Beverley wryly noted this week that “the bubble is what you make it.” He’s wise. When I first heard that I’d be spending three months at Disney World, I gritted my teeth. Florida’s humidity is fierce. An amusement park is a good walk spoiled. And, as a reality-based person with no interest in cartoons, I can’t pick Belle, Bambi or Buzz out of a lineup.

But I faced no pressure and needed no convincing. The media seats are 10 feet from the court, a dream perk. The world’s best (healthy) players will play out the postseason with invite-only shows in front of a few dozen onlookers, and the FOMO would have been unbearable at home. This is a big stage and few alternative theaters are open.

My greatest hope — besides good health for everyone — is that the bubble holds and the conversation can return to the court. These 300 players have prepared their minds and bodies to chase rings, and they deserve to see a champion crowned.

In the meantime, I’m acclimating. After spending my first four months of quarantine refining a high-protein, vegetarian diet and walking at least eight miles a day, I’ve had to reset my routines.

Each delivered meal is stocked with packaged items to reduce virus spread, leading to a pile of unopened junk food. By Tuesday, I had ordered 64 ounces of peanut butter online to fill in the gaps. I miss the Pacific Ocean breeze as I trek back and forth across my room, eight paces at a time, to satisfy my smartwatch’s demand for 12,000 steps. These minuscule sacrifices will be long forgotten once LeBron James and Zion Williamson take the court.

I’m thrilled to see the enormous flood of interest in the NBA’s return, but empathize with conscientious objectors who believe basketball should remain on hiatus. There’s no way around it: Recouping television revenue will increase risk for players. Someone could die, and careers could be altered by the virus’s unknown long-term effects. I think about that every day.

Locked up in this hotel room with my nostrils itching from the latest swab, October feels trivial and far away. I’m under 40, but old school enough not to care which team wins the Finals. This year, that’s about basic humanity, not just journalistic impartiality. The only competition that matters at Disney pits the sport I love against the germs that haunt us.