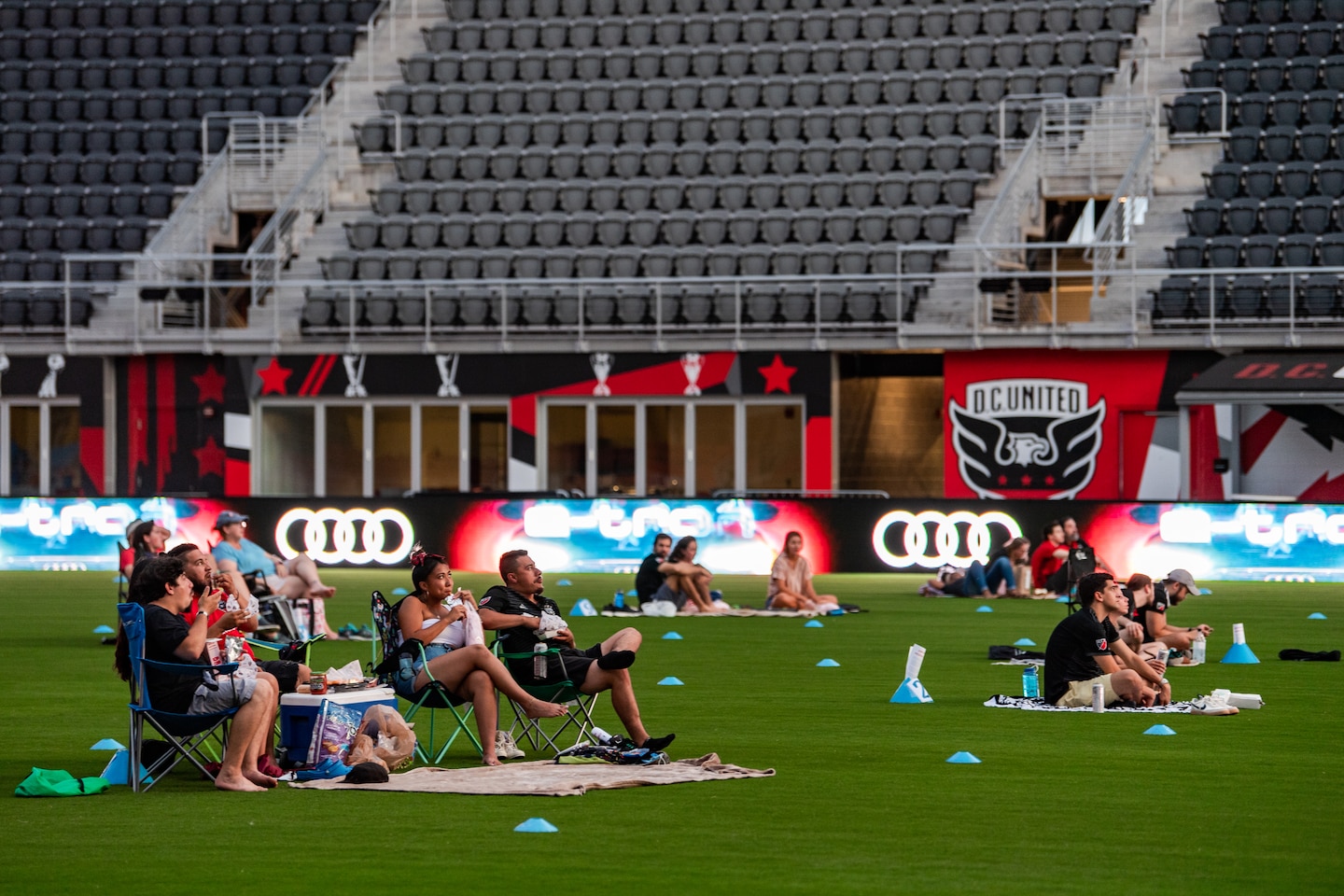 But on Friday night, United supporters again took in MLS action from Audi Field — albeit in long-distanced fashion. As the stadium’s video boards beamed in a feed of United’s 1-1 draw with the New England Revolution at the MLS is Back Tournament in Kissimmee, Fla., some 70 fans lounged across the field, spaced out by cones positioned in 15-by-15-foot pods.

“It was kind of weird to feel like I was going to do something semi-normal,” said United fan and D.C. resident Dominique Cox, 30. “It feels like it was two years ago that I last went to a game. It’s surreal being able to go to a public space while being responsible but also with fans.”

United extended the watch party offer on a first-come, first-served basis to season ticket holders, who were welcome to bring guests for the picnic-style event. The club charged $25 per person, with proceeds going to United’s charitable efforts, including a fund for pandemic first responders.

“For our fans, specifically, we’re trying to create some type of new normal,” said James Armold, United’s vice president of ticket sales and service. “At the end of the day, if we’re able to do it for a small subset of our season ticket members, I would say it’s extremely impactful and continues to point us in the right direction toward getting more people to the stadium once all of this stuff gets back to normal.”

Attendees on Friday checked in by name before a team employee ushered each group to its pod. The field was divided in half by a rope marker, with fans on either side using separate entrances to lessen foot traffic. United also provided four sanitization stations featuring one-gallon jugs of antiseptic. Masks were required when entering, exiting and walking around the stadium and whenever in proximity to others. Safety signage asked spectators to “please refrain from shaking hands, giving high-fives, and touching other people.”

“They did a lot better job than I thought they were going to do,” said fan Rob Husman, 40, of Crystal City. “I thought it was going to be a lot more crowded, have people closer together, use the entire space. But they opened it up, and they’re clearly following the rules.”

For Luis Granados, a season ticket holder since the league’s inaugural 1996 campaign, his enthusiasm for the spectacle was accompanied by nerves.

“As you can tell, I’m a real big mask fan, and I don’t like all of the unmasks that I see,” the 67-year-old Capitol Hill resident said through his weathered green bandanna, nodding toward attendees who had removed their face coverings after settling into their pods. “On the other hand, they are pretty far away.”

As the fans filed in, lawn chairs, blankets and coolers in tow, the voices of ESPN commentators Jon Champion and Taylor Twellman boomed through the loudspeakers, reverberating off the stadium’s empty seats. Although spectators were allowed to bring outside food, the club revived one concession stand at each end. The team store also opened for business, with social distancing reminders placarded on the floor and its mannequins modeling D.C. United masks.

William Paladines of Silver Spring turned the occasion into a family affair, bringing his wife and daughter, along with his brother-in-law and nephew visiting from San Francisco.

“As soon as I got the email, I just jumped on it immediately,” said Paladines, 38. “There’s not much that we can do, obviously, so whatever chance we can get to come out within a safe zone, we will do it.”

As the operations director for the Smithsonian Folklife Festival, D.C. resident Jason Morris came both to support United and see whether he could glean any lessons from the club’s setup.

“One of the conversations that [the Smithsonian is] having right now is, ‘How do you do a big event outside?’ ” said Morris, 45. “Here, it seems pretty simple. People are more than happy to follow the rules, and you have plenty of space.”

As a steady breeze cut through the sticky summer air, darkness enveloped the 20,000-seat stadium — leaving the video boards as the only illumination. Aside from smatterings of applause in appreciation of Bill Hamid saves and Federico Higuaín’s second-half equalizer, the fans observed the match in a leisurely silence more akin to an outdoor movie night than a sporting event.

United does not plan to host a watch party for the club’s MLS is Back Tournament group stage finale Tuesday, when D.C. will kick off against the Montreal Impact at 10:30 p.m. But the team is open to revisiting the idea should United advance to the knockout round.

The organization also recently surveyed season ticket holders about the possibility of allowing some fans to attend regular season games as MLS looks to host matches in teams’ respective markets following the conclusion of the Florida tournament.

“As long as they continue to show that they’re setting procedures and following protocols,” Husman said, “I’d be all about coming back.”