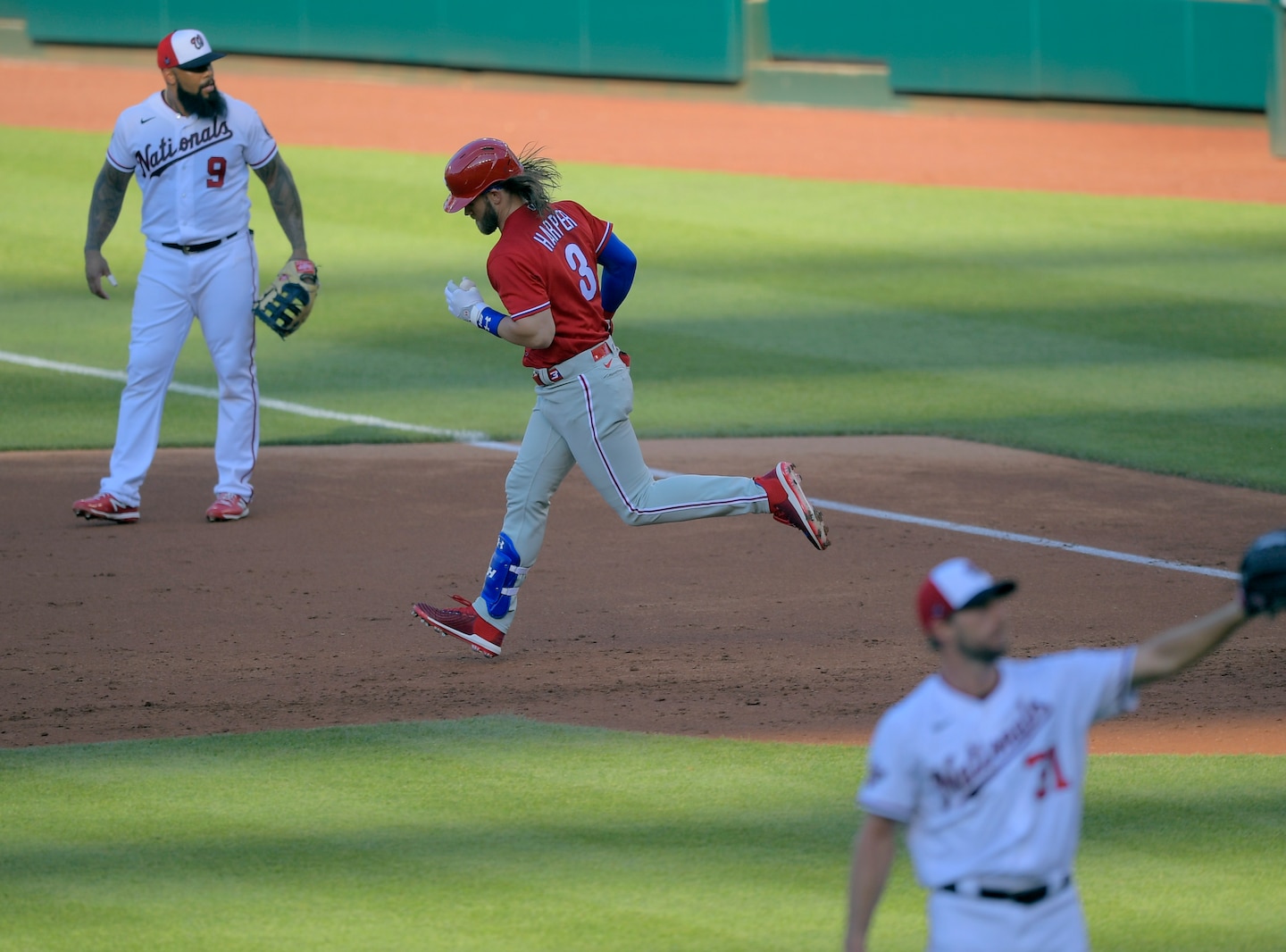 But it wasn’t loud. It certainly wasn’t well attended. With no fans inside Nationals Park and nothing but music and fake crowd noise, this was a glimpse of baseball in 2020. It was quiet and weird, with the soft relaunch beginning once Max Scherzer fired a first pitch curveball to Andrew McCutchen.

The stadium clock read 6:05 p.m. The temperature was a smothering 97 degrees. The Phillies eventually won, 7-2, with Max Scherzer giving up seven runs across the first and second innings.

Since July 3, when summer training began, teams have test driven a new set of health and safety protocols. Players and coaches are not allowed to spit. Pitchers have to carry their own baseball to the mound before each inning. Masks are required for everyone inside club facilities. Coaches, staff members and umpires have to wear them at all times.

Those were some ways the game looked different Saturday. Another was a set of three blue tents down each foul line, a measure to limit numbers and overcrowding in dugouts. Each area is equipped with massive fans to increase ventilation and keep reserves cool. And in the second inning, they craned their necks to watch Harper’s three-run homer sail over the right-center wall.

Instead of crashing into blue seats, the ball bounced off an advertisement for pet food. It was one of five large signs in place where fans usually sit. The only sound, once the fake crowd noise softened, was scattered claps and cheers from Harper’s teammates. The blast gave the Phillies a 7-0 lead. It came after shortstop Didi Gregorious went deep in the first while wearing a mask.

Scherzer gave up six hits and seven earned runs, walked two and struck out six in five innings. He threw 88 pitches and was pleased with throwing his off-speed pitches in the zone. He is expected to start the season opener against the New York Yankees on Thursday.

“I wanted to make sure I really had a feel for the zone before Opening Day,” Scherzer said. “Hey, I got beat around a little bit, but that’s good. You have to work out of the stretch, have to make pitches in those types of situations. That’s what happens in the regular season. It’s not always going through lineups and everything’s easy.”

Earlier Saturday, news broke that the Toronto Blue Jays cannot play in Canada this season. The Blue Jays, scheduled to host the Nationals on July 29, will now decide between Buffalo and Dunedin, Fla., for their home in 2020. In Atlanta, Braves first baseman Freddie Freeman told reporters that a recent battle with the coronavirus included a 104.5 fever. That led him to say a prayer: “Please don’t take me.”

These are just some of the reminders that MLB is attempting to play through an ongoing pandemic. The on-field product, though appearing as a shade of normal, should offer similar clarity.

When the Nationals held a moment of silence for Rep. John Lewis (D-Ga.), the civil rights leader who died late Friday after spending more than three decades in Congress, it was interrupted by a beeping truck on a nearby street. When Scherzer didn’t like a call in the third, his protest to plate umpire Larry Vanover — “Come on, Larry!” — was heard from the 400 level. When Starlin Castro hit a foul ball in the fourth, Nationals catcher Tres Barrera, as if he were in Little League, jogged up the concrete steps to retrieve it.

He scanned the ground before realizing it landed square inside a cupholder. It’s funny what can happen without the obstruction of outstretched arms.

“The energy in the stadium that’s usually there isn’t there, per se,” Nationals shortstop Trea Turner said. “But with the crowd noise, I think it helps cancel out hearing the other team say things.”

Manager Dave Martinez rolled out a strong approximation of an Opening Day lineup. He went with veteran Asdrúbal Cabrera at third base, though it’s still possible that he goes with rookie Carter Kieboom against the Yankees. They struggled against Phillies ace Aaron Nola, who threw two four-out innings, in the third and fifth, to add to his workload.

The notable omission was center fielder Victor Robles, who made his first appearance at the park after completing a 14-day quarantine. Robles was one of six players who may have been exposed to the virus on one of two MLB-chartered flights from the Dominican Republic to Miami on July 1.

And because the District requires 14 days of isolation for anyone potentially exposed to the coronavirus, the Nationals were considering alternate sites until Friday morning. The city permitted the Nationals to go straight from home to work while quarantining, though it did describe that as a potential risk to the club and general public.

Deciding to play the season in Washington was a box the Nationals had to check. Saturday’s scrimmage was, too. Next, the Nationals have an exhibition in Baltimore on Monday, inviting a fresh round of questions: What will traveling entail? What will the accommodations be at Camden Yards? Will the team get tested before boarding the bus or once it gets there?

Those are just a few immediate challenges. Many more await.