Jon Rahm’s dizzying rise reaches No. 1 in the world with a win at the Memorial 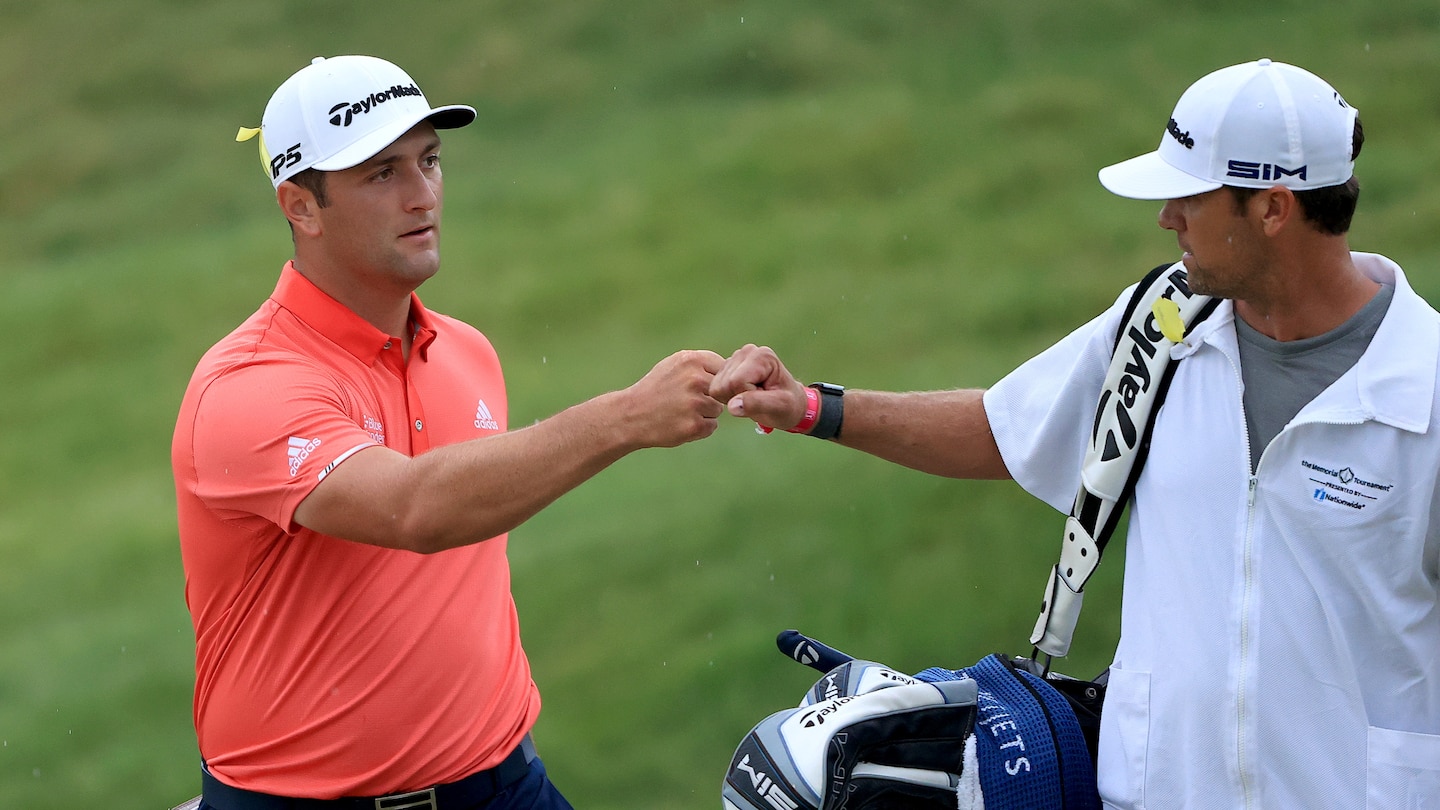 He started off at a college tournament in Minnesota, shot an 81 out of the box and reportedly knocked over his golf bag. He got an exemption to the Phoenix PGA Tour stop in 2015 and finished a heady fifth even after starting off with nerves jangling such that he said, “I honestly thought I was going to pass out right on the tee.” He twice won the Ben Hogan Award as the best college player but told a reporter that the run-up to the first awards night had left him a wreck.

Well, eventually — but not really all that eventually — Jon Rahm walked off No. 18 on Sunday early evening here as the new No. 1 player in the world after ruling the tournament Jack Nicklaus founded on the biting course Nicklaus dreamed up. He had overcome three bum holes during the back nine and one nutty two-stroke penalty doled out afterward to win the Memorial by three strokes over Ryan Palmer, to topple Rory McIlroy from No. 1 and to become the 24th man — and the second Spanish man, after only luminary Seve Ballesteros — to please the rankings computer enough to reach its summit.

“It’s hard to process,” Rahm kept saying in interview after interview. “I don’t know how to describe it. It’s been a goal since I was 13, 14 years old.”

He had clinched the tournament, pretty much, on the par-3 No. 16 in a fashion the late Ballesteros would have relished: with a delicious 31-foot chip from trouble to birdie, handy given it later turned to bogey. He had shot a 75 to finish at 9 under par on a trying day with a 49-minute weather delay when the course menaced enough that the 75 seemed just about as good as the 69-67-68 sequence that had made him the leader.

All this mattered deeply even if it lacked the roars to match along No. 18 at the latest PGA Tour event without spectators, in this strange time when the news Sunday included Nicklaus announcing on CBS that he and wife Barbara, each 80, had tested positive for the novel coronavirus in March, their symptoms ranging from mild (Jack) to none (Barbara). Both Nicklauses stood nearby as Rahm stared down at the last ball in the last cup, looked up, smiled, then went to share two pandemic-era fist bumps with Jack.

“How many people can say they got a congratulatory fist bump from Jack Nicklaus?” Rahm said.

“I was proud to see him win,” said Palmer, who played alongside Rahm on Sunday and teamed with him in April 2019 to win the duos’ tour event in New Orleans.

Pegging himself as “more mature” than four years ago, when he stormed onto the tour amassing promise, he spent Sunday leading by four, then eight, then three, then five at the end of play, then three at the end of the day. That last part came about because just before he struck the big chip, the ball made what he called a “minimal oscillation” that he did not notice. He later agreed the ball moved, justifying the two-stroke penalty, and said, “It just puts a little bit of an asterisk in it in the sense of I wish I could just keep that birdie because it was one of the greatest shots of my life, right?”

Still, it would have been “really, really cool to see how that would have been with a crowd,” he said, especially because the shot followed misadventures at Nos. 10, 11 and 14, trips to the rough and the water and a bunker, respectively, sowing a bogey, double bogey and bogey that let Muirfield Village reveal its prudishness. By the end, he had won on a course that spent the weekend growing firm, thus ornery. The field’s scoring average of 75.96 became the highest in any tour event since the 2018 U.S. Open.

Collin Morikawa, 23, who won the first leg of the Tour doubleheader here a week earlier, said, “Yeah, just a completely different course,” telling of rougher rough, quicker greens and meaner pin locations. Tiger Woods, who tied for 40th at 6 over after a 76, said, “It’s been a while since we had conditions this quick, but this is how Jack loves it.” Phil Mickelson saw a “firm, fast, difficult test.” Bo Hoag, a Columbus, Ohio, native and grandson of a founding member here, surmised, “Geez, I’d probably say just from an average day, it’s probably seven shots harder — seven or eight shots harder, I’d say.” Matthew Fitzpatrick’s 68 vaulted him from 18th to third and seemed like a symphony amid the croaking scores.

On such a day in such a place, Rahm had gone along birdieing the two par-5s on the front nine yet knowing that “at some point something was going to go south.” It had to, but when he weathered the grind, he won as both a very young man and a top-tier mainstay who has frequented the top five for 80 weeks in recent years. “It’s pretty surreal to think it’s happened this quickly, right in less than 10 years,” he said.

From the callow days after he reached Arizona, he hopscotched all the way through that 64 at Congressional that opened his pro career in 2016, a win at 22 at Torrey Pines in 2017, six wins in Europe, two more wins in the United States, four top-10 finishes in 14 majors, Masters finishes of fourth and ninth, and a runaway ratification of how Tim Mickelson, Phil’s brother, took the advice of Ricardo Relinque of the Spanish Golf Federation and welcomed Rahm when the younger Mickelson coached Arizona State.

“Jon Rahm is a remarkable talent, and you’re seeing it,” Phil Mickelson said. “You’re seeing it in his play week in and week out from a game that has no weaknesses, drives it long, drives it straight, good iron play, good wedge play, great putter. He just doesn’t have a weakness, and he also has great course management, thinks himself around the golf course, and he knows himself. He knows that to relax sometimes he has to let some of his anger out. He can’t hold that in. It might upset some people, but he knows that it allows him to be at his best.”

All of the above has come true in the kind of whoosh that indicates great talent — and not long since Rahm answered one of those goofy athlete questionnaires colleges do by saying he liked ham on pizza, Michael Jackson’s “The Way You Make Me Feel,” Rafael Nadal and Shakira and that he had gotten to be around José Ángel Iribar of Athletic Bilbao fame. Asked to describe himself in three words, Rahm went with “competitive, positive and lazy.” Already he had traveled far, with the idea of traveling very far, all the way to the top.