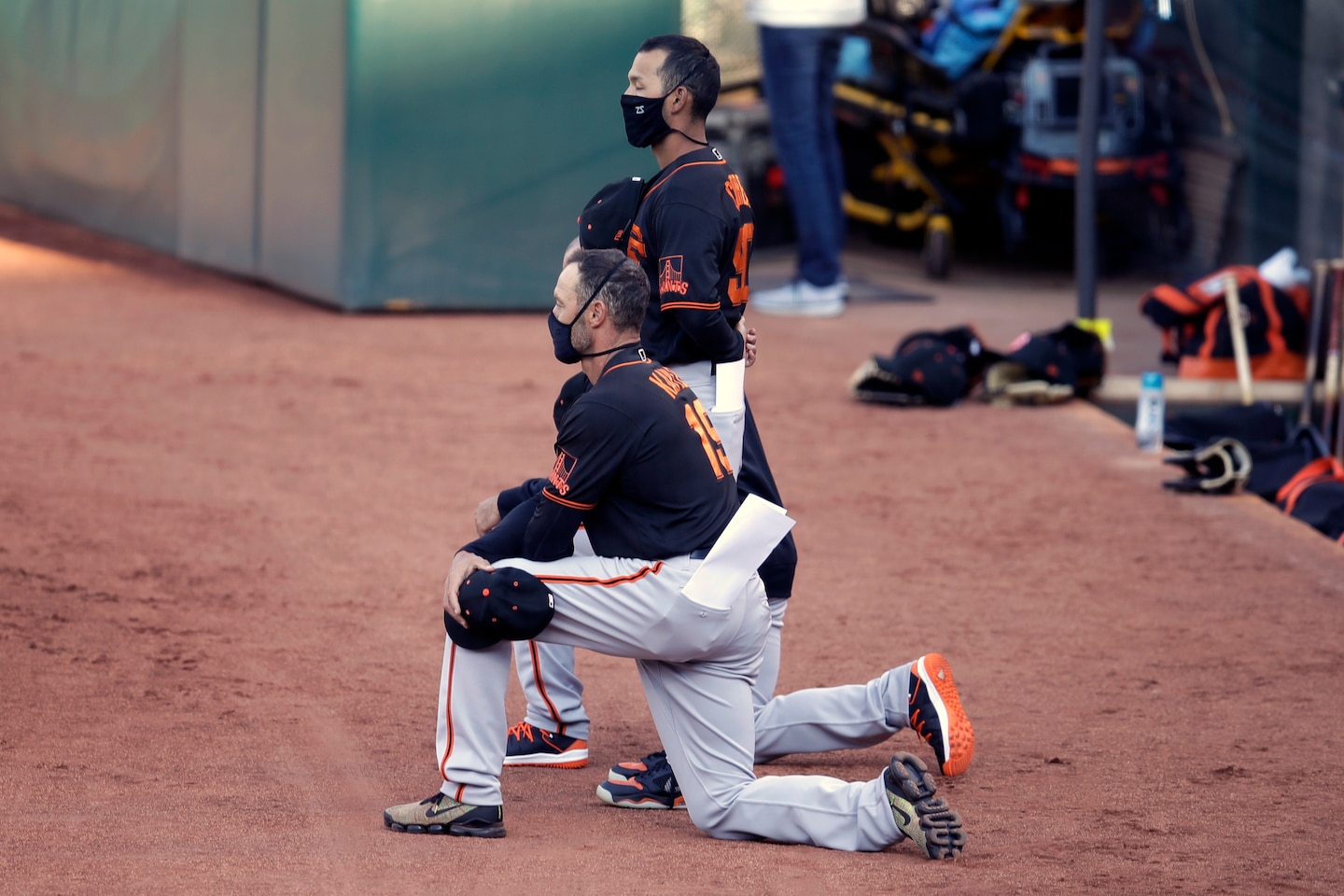 The demonstration by the Giants and one by Los Angeles Angels reliever Keynan Middleton, who took a knee and raised a fist before playing an exhibition game Monday night in San Diego, were the first in MLB since Bruce Maxwell took a knee in September 2017, when NFL players and other athletes followed the example set by Colin Kaepernick by taking a knee to protest police brutality and racial injustice. The demonstrations angered the president, who saw it as criticism of the flag and the military.

Now, with sports competition returning a little less than two months after the deaths of George Floyd, Breonna Taylor and other unarmed black people sparked protests across the country, Trump is taking the same stance that set off a national debate.

“My response [to Trump] is I don’t see it as disrespect at all,” Kapler said Tuesday (via USA Today). “I see nothing more American than standing up for what you believe in. I see nothing more patriotic than peaceful protests when things are frustrating and upsetting.

“And finally, there’s nobody that should make us stop doing the right thing. It doesn’t matter what leader says that they’re not going to be following a game. What matters the most is that we’re unwavering in trying to do what’s right.”

Athletes’ demonstrations seem likely to be repeated as sports gear up again, and the Giants weren’t alone. The regular season opener between the Washington Nationals and New York Yankees on Thursday night will carry a subliminal message, with Anthony S. Fauci, director of the National Institute of Allergy and Infectious Diseases and one of the country’s leading voices during the pandemic, throwing out the ceremonial first pitch.

On Tuesday evening, Kapler and other members of the Giants again took a knee before an exhibition game. “What guides our decision,” the manager told USA Today, “is standing up for people who need us to stand up for them.’’

Kapler, who is in his first season managing the Giants, is believed to be the first manager or head coach in any of the four major North American pro sports leagues to protest in such a way. He told players and staff his intention Monday and said he would support whatever decision each individual made.

“I wanted them to know that I wasn’t pleased with the way our country has handled police brutality,’’ Kapler told reporters after the exhibition game Monday against the Oakland Athletics at Oakland Coliseum. “I told them that I wanted to amplify their voices and I wanted to amplify the voice of the black community and marginalized communities as well.

“I wanted them to know they’ve got to make their own decisions. And we would respect and support those decisions. I wanted them to feel safe in speaking up. We’ve had these discussions the last several days, and we will continue to have them.”

Giants outfielders Jaylin Davis, Mike Yastrzemski and Austin Slater took a knee, as did first base coach Antoan Richardson. Shortstop Brandon Crawford stood behind Davis and Richardson with his hands on their shoulders. Last month, Davis wrote of the racial discrimination he has experienced, adding, “Unless we all find a way to openly talk and genuinely listen to each other about racism, we have no hope of rooting it out.”

Maxwell, who has been playing for the Acereros de Monclova of the Mexican League for the past two seasons after his protest, took a knee before a game the day after Trump, at a rally in the catcher’s native state of Alabama, called on NFL owners to “fire” any “son of a b—-” who didn’t stand during the anthem. Maxwell continued to protest that season and was moved by the Giants’ demonstration Monday night.

Maxwell continued: “If I was there, I would give Kapler a big hug, shake his hand, and tell him I’m honored to be next to him. That was a big step. For somebody in that position, to put his title aside, to make himself vulnerable in that situation and stand for what is right, is big for humanity.

“It’s nothing to do with the flag, not the military. It’s a message standing up for the right cause.”

Giants right-hander Kevin Gausman told Nightengale that Kapler had told players they were free to decide what to do.

“His biggest thing is whatever side you’re on, whether you decide to stand or kneel for whatever reason, that he was going to stand by us,” Gausman said. “I think that’s important right now.”

The day after his own demonstration, Middleton explained his gesture, tweeting, “Kneeling for me is one way to continue to “use my platform for change in a peaceful way.”

Angels Manager Joe Maddon told the Los Angeles Times that Middleton had suggested the idea during a team video conference on the Black Lives Matter movement in June.

“That’s what he showed you tonight,” Maddon said. “I have a granddaughter who’s going through the same thing right now, and I totally support her reaction to all of this.”