Why was that 53-year-old in the Nats’ outfield? Because in a pandemic, everyone chips in. 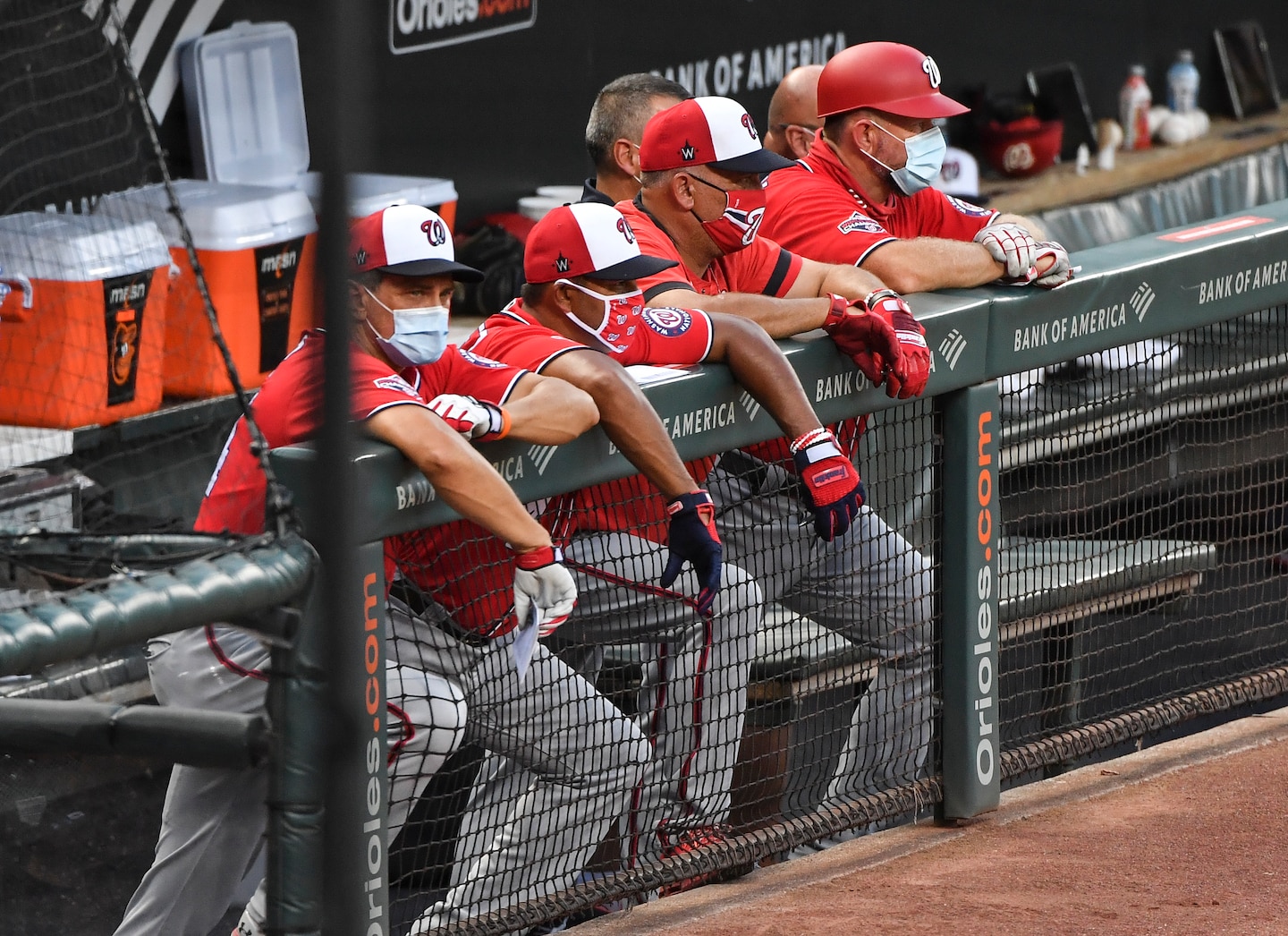 In baseball, as in many workplaces during the novel coronavirus pandemic, odd jobs are common. Old jobs are more nuanced and complicated. In the three weeks leading into Opening Day, which is scheduled for Thursday at Nationals Park, the whole sport has adjusted to a new normal, a new set of rules and, for many, a new definition of work.

That’s stretched staff, coaches and players thin and led to some wacky sights. And this is only the beginning.

“Everybody is all hands on deck,” Nationals Manager Dave Martinez said July 11, a week into summer training. “We’re trying to get everybody involved.”

Early in camp, Martinez needed a half dozen Band-Aid fixes. Juan Soto, Victor Robles, Howie Kendrick, Starlin Castro and Luis Garcia were all absent while quarantining for 14 days. Contact tracing suggested that each could have been exposed to the coronavirus. So to stage an intrasquad game without five position players — four of them expected starters — the Nationals got creative.

Raudy Read, typically a catcher, played first base in place of Kendrick while wearing a mask. Jake Noll, typically a corner infielder, played second in place of Castro. Emilio Bonifacio, a utility man who favors the infield, played center field in place of Robles. Wilmer Difo played back-to-back half-innings at shortstop because Trea Turner needed at-bats and Garcia was not there to step in. Andrew Stevenson, a skilled outfielder, was the de facto Soto in left. Then Jeff Garber, the 53-year-old minor league field coordinator, wound up in right.

These were short-term solutions for temporary holes. The shifts also let Martinez see who could fill random spots, depending on what happens during the season. With every-other-day coronavirus testing, there could be a situation that leaves Martinez without a handful of regulars at a moment’s notice. Say a player tests positive and he and anyone he has recently had close contact with must immediately quarantine. The Nationals wouldn’t know until they know. They would have to scramble.

“You don’t know what’s going to happen,” Martinez said July 13, when rookie Carter Kieboom was a late scratch from a simulated game because of trouble with a contact lens. “So we just got to prepare with the guys we have to do the best we can and field what we believe is a better team that day.”

But other personnel tweaks are here to stay. At least for the rest of 2020.

To replace veteran first baseman Ryan Zimmerman, who opted out of playing this season, Kendrick, Eric Thames and Asdrúbal Cabrera will see increased time at the position. To replace Ali Modami, a trusty left-handed batting practice pitcher, minor league hitting coordinator Troy Gingrich was promoted to Martinez’s staff. It helped that Gingrich is left-handed and can help fill the void left by Modami’s overworked arm.

And to replace Welington Castillo, a catcher who opted out, the Nationals are trying utility man Brandon Snyder behind the plate. Snyder was drafted as a catcher in 2005 and has since played all nine positions in the minors. He hasn’t caught in the majors since 2012, when he did in an emergency for the Texas Rangers. In 2019, with the Nationals’ Class AAA affiliate in Fresno, Calif., he made 49 appearances at first base, 36 at second, 21 at third and 16 in right field.

His lone appearance at catcher came when the starter was injured and the backup ejected. The 33-year-old jogged in from right field to put on the gear. Catching could increase Snyder’s value as he hopes to make his Nationals debut in the coming months. But in the meantime he is more than willing to pitch in as needed.

“However they can use me,” Snyder said in an interview. “With all the safety protocols, some guys not here, the staff smaller because of the rules, there are so many moving parts. I’ve spent my career just going where I’m told, helping out, you know? Like when Octavio has to be the batboy for the afternoon, I can go to the bullpen and catch. It’s no sweat.”

There will be no adolescent batboys or girls in 2020, nor will there be adolescent ballgirls or boys. That’s another odd reality of 2020. There are a few ways to fill those roles, as teased in the lead-up to a 60-game schedule. The Nationals used Octavio Martinez in intrasquad games, mostly for his arm and accuracy when firing fresh baseballs to the pitcher’s mound.

When there weren’t umpires — well, the catchers were the umpires — Martinez had to regularly throw in a ball that hadn’t met anyone else’s skin. Another weird rule is that any ball touched by three or more players has to leave the field for cleaning. During the season, the home plate umpire will wear batting gloves, receive a steady stream of balls and hand one when necessary to the catcher, who will then throw it to the pitcher.

Because Martinez will probably be in the bullpen as usual, the Nationals will cycle through bat and ball “boys.” They will be busy. During an exhibition in Baltimore on Monday, the Orioles provided one between the two teams. During an exhibition at home this past Saturday, Washington used clubhouse attendant Kenny Stevenson.

Stevenson is usually behind the scenes, handling laundry or stocking toiletries. Now, with a mask covering his face, he shuttled bats and balls between home plate and the dugout. Rob McDonald, the team’s vice president for clubhouse operations and travel, was scheduling five buses for the short trip to Baltimore, with no more than 14 on a bus to stress social distancing. By the next morning, Paul Lessard, the director of athletic training, would take temperatures as players, coaches and staff entered the ballpark.

These adjustments were all sharp and critical. It’s the only way pandemic baseball can work.

“You check your ego,” Snyder said. “Then you see what the day might hold.”