Shut out from Nationals Park, fans look for other ways to make Opening Day memorable 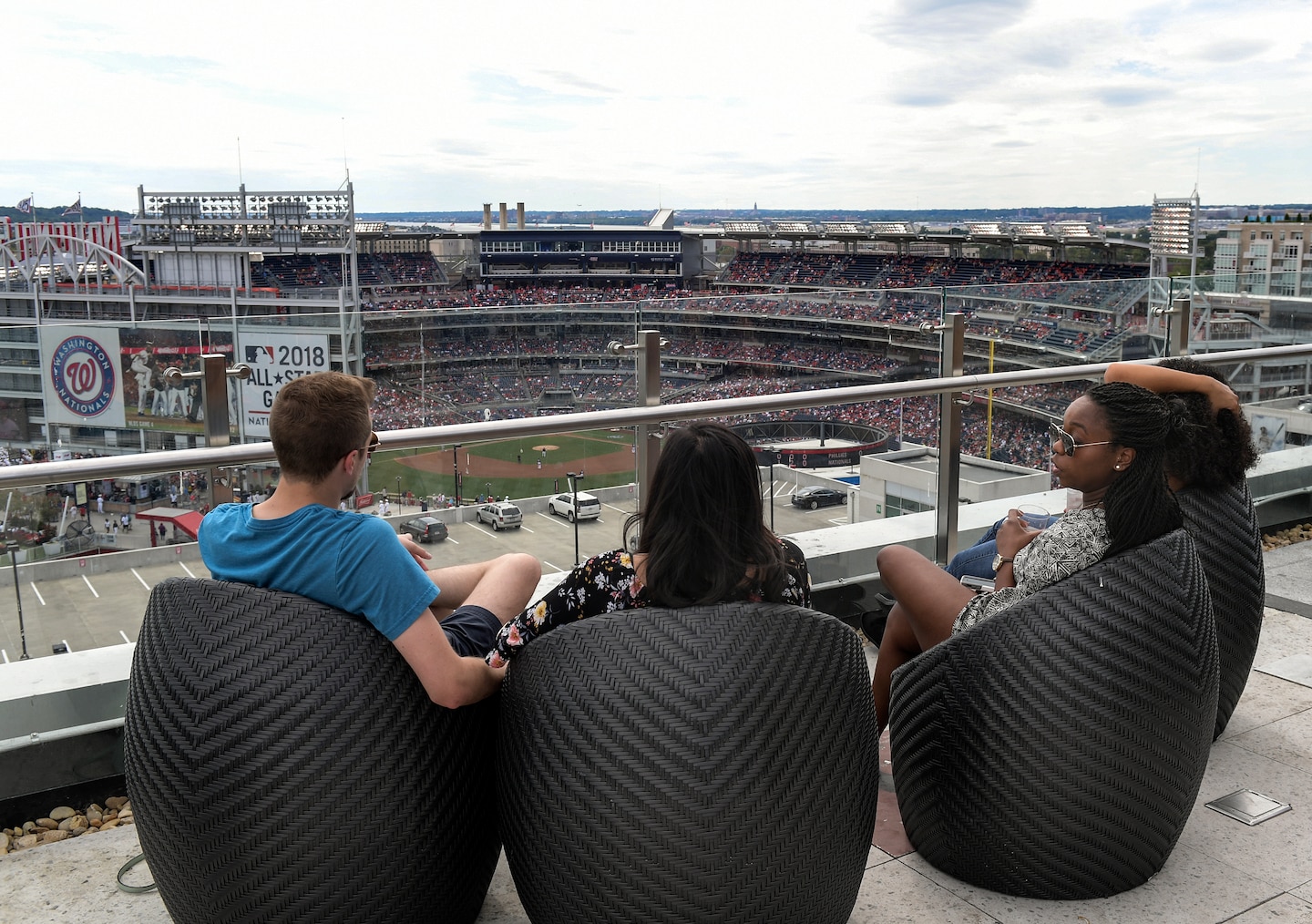 “The chance to see Max Scherzer vs. Gerrit Cole in the very first game of this completely wacky season about to start, it was worth going up there in a mask and seeing how it unfolded,” Kight said in a phone interview. “I had great intentions, but unfortunately I will not be able to do it.”

Last week, Kight got word that with the District still in Phase 2 of its coronavirus reopening plan, access to the rooftop required a reservation. By the time she called the hotel to confirm that was the case, the only time slots available on Open Table for Thursday were at 4:30 p.m. and 9:30 p.m. Kight canceled her room reservation and received a full refund.

A message on the hotel’s website notes that some services “may not be available or limited,” including the on-site restaurant. The maximum capacity at Top of the Yard during Phase 2 is 25 seated customers, and reservations are limited to one hour and 15 minutes. No priority is given to guests staying at the hotel.

“Once the season was announced, we’ve fielded a tremendous amount of calls inquiring about our rooftop,” Hampton Inn & Suites General Manager James Thomas said in a phone interview. “Our staff has been informing individuals [about the reservation policy].”

In early July, Nationals fan Jacob Ottinger posted a message on the Nationals’ subreddit inquiring about whether anyone who lived in one of the condos with a view into Nationals Park might make their place available for the opener. The 1221 Van and West Half apartment buildings are limiting rooftop access to residents at this time, but several individual units in both buildings offer views of the field.

“My friends and I just wanna watch baseball live and would pay if anyone has those accommodations,” Ottinger wrote.

“I had some chats with people, but nothing went through,” said Ottinger, a recent graduate of Franklin & Marshall College who won’t get to use the 82-game, standing room only ballpark access pass he purchased for this season. “They didn’t want an outside person in their apartment, which totally makes sense, and the ones with a view are the expensive ones.”

To Ottinger’s disappointment, a representative at 1221 Van told him that renting an apartment for a day was not possible. Instead, he and a group of his friends plan to set up a projector in one of their backyards in Chevy Chase on Thursday and invite their families over for “a nice, socially distant” watch party.

Nationals fans Stephen and Mina Klier, who have made a day of attending the Nationals’ home opener for each of the past five years, are going to great lengths to bring the Nationals Park experience to their Bristow home. The couple was among the sellout crowd at Ballpark of the Palm Beaches in West Palm Beach, Fla., for the Nationals-Yankees exhibition game on March 12 when MLB announced it was canceling the rest of spring training and delaying the start of the regular season by at least two weeks. They caught a flight back to the District the next day.

“Just like everything else in the world, we had to kind of change gears and readjust, but it was never really an option to not celebrate Opening Day,” Stephen Klier said.

When MLB announced the Nationals would open the 60-game season against the Yankees in Washington, the Kliers started planning.

“We love having friends over, and we figured if we’re not going to spend all the money on Opening Day tickets and going down there, then we might as well be able to have a little blowout here to celebrate the season starting,” Stephen said.

Stephen bought a WiFi cable box and mounted a 50-inch TV to the roof rack of his car in front of their driveway, covering it with a canopy tent to prevent glare. Mina made Nationals face masks for everyone, as well as a reproduction of the Commissioner’s Trophy and gold-accented red T-shirts with the Nationals’ 2020 schedule printed on the back, because what’s Opening Day without a giveaway item? Hot dogs and ice cream helmet sundaes are on the menu.

Pregame drinks, including Bud Light tallboys and vodka lemonades like the ones sold at Nationals Park, will be served on the back deck, which will be adorned with a Bud Light flag.

“I’m a Miller Lite guy myself, but we got to stay on theme,” Stephen said.

Happy hour will end 30 minutes before first pitch, just as it does at the bar beyond the center field scoreboard at Nationals Park, which will give the Kliers’ eight to 10 guests plenty of time to get situated in their socially distanced folding chairs in the driveway for the World Series banner unveiling above the garage.

“We’ll play ‘We Are The Champions,’ and when the crescendo builds, I’ll pull the slip knot to reveal the banner,” Stephen said. “I imagine the crowd will be going wild. Our neighbors are going to love us.”

The Kliers never really considered coming into Washington to watch the opener at a bar near the ballpark, but several local staples, including Walters, Mission and The Salt Line, will be open with reduced capacity. Buffalo Wild Wings on Half Street hired Nationals Park organist Matthew Van Hoose to provide entertainment and three well-known local beer vendors, including “Fancy Clancy” Clarence Haskett, to hawk suds on Thursday. The Bullpen, which plans to be open for home and away games this season, is fully booked for Opening Day, but Bardo Brewing will be showing the game in its beer garden on the other side of the park.

Denied a spot at the Top of the Yard, Kight, who said she would have “paid triple” the going rate for the chance to attend Opening Day after it was announced that Anthony S. Fauci would throw the ceremonial first pitch, plans to skip the bar scene and watch Thursday’s game from the comfort of her home.

“It’ll just be me on the couch, which is fine, because that’s how I watched the World Series last year, and we got lucky with that,” she said.