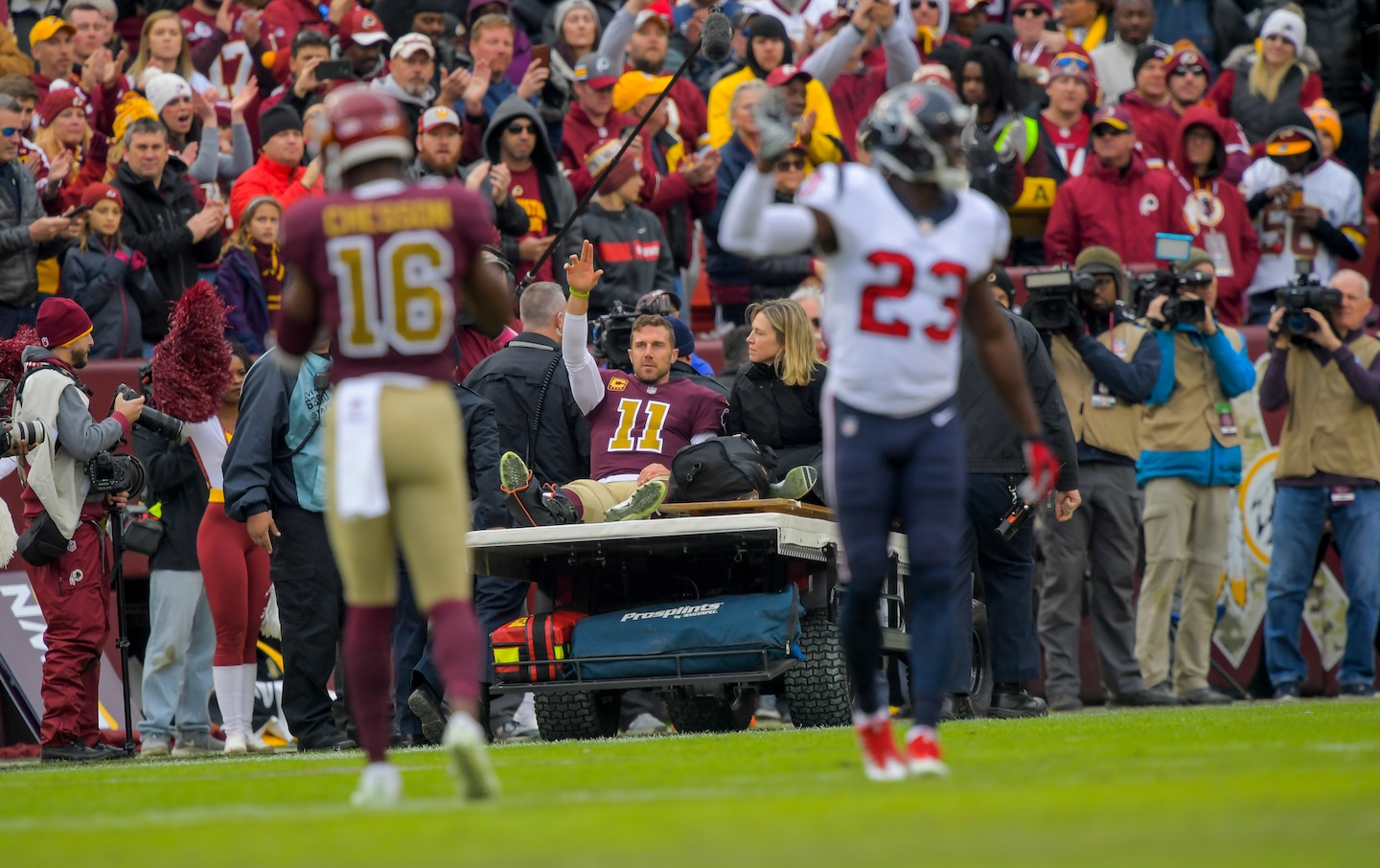 Mayer noted Washington Football Team physician Robin West is part of the group of doctors who cleared Smith to resume football activities. He pointed out that, despite the novel coronavirus pandemic, Smith and his wife, Elizabeth, have decided “this is his work to do — and he’s going to do it.”

“Alex is a warrior,” Mayer said. “My middle son did two tours in Afghanistan. Those guys are warriors, so I don’t use that term lightly. I use it with Alex because he literally fought off death.”

The news of Smith’s clearance Friday, reported by ESPN, came as a bit of a surprise. Since Smith fractured the tibia and fibula in his right leg in November 2018, some around the team had expressed admiration for his work ethic but skepticism he could actually return. Smith is already guaranteed his 2020 base salary of $16 million, according to OverTheCap.com.

A Washington spokesman said Saturday the team would not comment on Smith’s medical condition until Monday’s physical.

If the team clears Smith, his comeback attempt would continue as training camp begins Tuesday. Mayer believes in West — “she’s one of the best” — and Washington’s process.

“With Dr. West and that [medical] team, they’re not going to just tell [Smith] what he wants to hear,” Mayer said. “They’re going to tell him what’s in his best interest.”

“What an incredible return,” Watt wrote. “Couldn’t be happier to hear it, truly rooting for his success.”

Even if Smith is cleared Monday, he won’t be facing a pass rush in pads anytime soon.

If he passes his physical, the question then becomes whether he will be able to sustain contact — though it needn’t be answered right away. There will be no padded practices until Aug. 17, according to the NFL and NFLPA agreement completed Friday, and even after that, quarterbacks are usually kept from contact during practice.

For Smith to return, outside medical experts cautioned that serious concerns must be addressed. Christopher Lee, an orthopedic surgeon specializing in sports medicine, pointed out it’s “almost unheard of” for anyone, including elite athletes, to return from an injury like the one Smith suffered. “It’s still amazing he’s even walking,” said Lee, who has not examined Smith.

The risks for Smith, 36, returning to play are significant. There’s a chance the right tibia will never be as strong as it once was, Lee said, and if he reinjures the leg it “could be quite severe.” There is also concern about chain-reaction injuries caused by Smith compensating for the right leg.

The first liable spot is Smith’s left quadriceps. A plastic surgeon transferred part of the muscle from the quad to the injury to help save the right leg. It’s also possible, Lee said, the quad or the glutes aren’t strong enough to withstand a hard hit without suffering another extremity injury, such as to the ankle, hip or knee.

Though there is precedent to returning from a fractured tibia — Paul George of the Los Angeles Clippers and Earl Thomas of the Baltimore Ravens have done it in the past five years — Lee stressed those two are different from Smith, who battled a “nasty” infection afterward. The bacteria entered Smith’s bloodstream and nearly killed him.

The infection inflicted soft-tissue damage that leaves Smith vulnerable, Lee said. He added Smith could suffer significant harm from something as small as a helmet glancing off his right shin. Even if surgery was successful, and even if the muscle flap positioned to cover the exposed bone is successful, “you just never quite know” how more trauma to the area might play out.

Yet Lee saw Smith’s documentary that premiered in May, and he remembered trying to square his medical expertise with the improbable resolve he saw on screen.

“It sounds like if someone’s going to [complete the comeback],” Lee said, “it’s going to be him.”