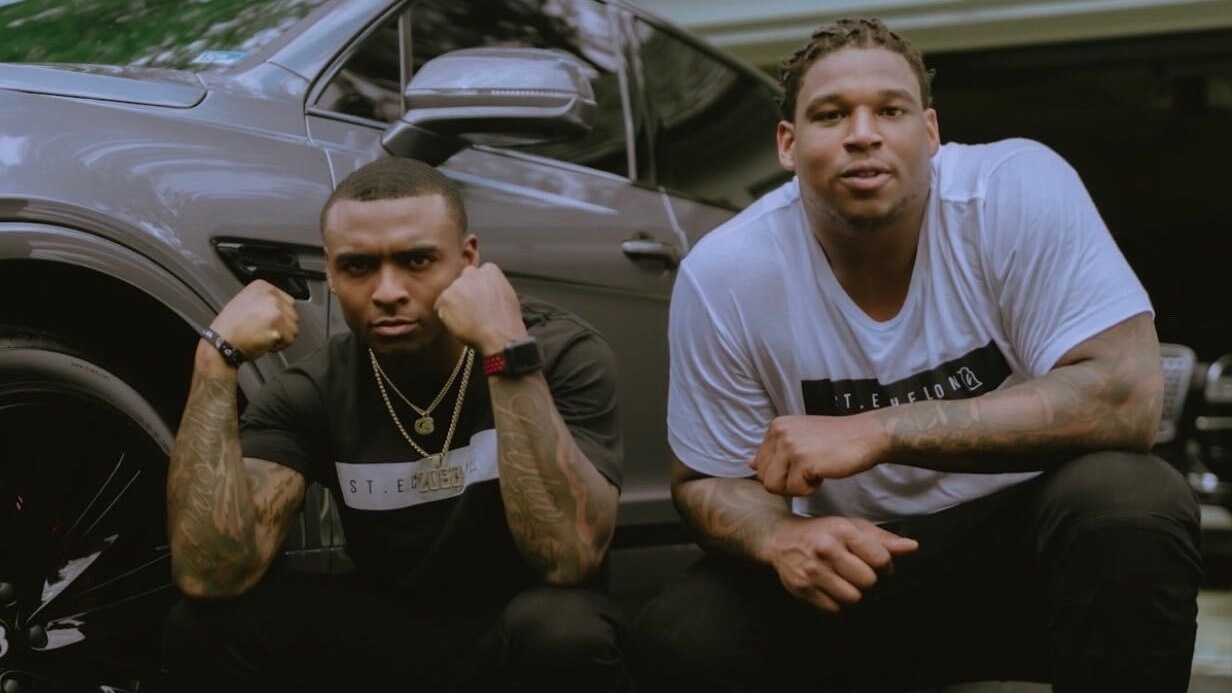 It started when Martin’s wife, Bailey, liked a birdhouse on Pinterest. Martin decided to build the two-level, three-bedroom McMansion with friend and fellow lineman Chase Roullier, who knew how to woodwork. Then, as quarantine began, Martin found himself spending more and more time with saws, sandpaper and schematics.

Projects popped up around the house. Martin built deck chairs, a dog-bowl stand and flower boxes. He fashioned a nightstand and a concrete-topped, outdoor end table. He repurposed tobacco beams to build another concrete tabletop. The 24-year-old spent most of his life devoted to football and the family dog-rescue back in Ohio — they recently purchased a new facility for their dozen or so pups — but, in quarantine, this became an invaluable outlet.

“People need to stick to a routine so they don’t go crazy,” Martin said, “and this definitely turned into something that, outside of my workouts, I could focus on and divert my attention to.”

The project he’s most proud of is an ambrosia-maple wood table with “a cool texture” created by burrowing ambrosia beetles. Martin got a hand planer to smooth out the slab’s marks from the sawmill and spent hours refining the warped wood. He routed out slots to fit the legs, and each step underscored the process’s fragility.

“Another cool thing about working with wood: You really never know how it’s going to react or warp or bow,” Martin said. “You maneuver with it however it presents itself.”

From this process, Martin realized the satisfaction of looking at something clean and professional and knowing who put it together. And he’s not the only one who has admired the handiwork. The bird McMansion, Martin said with a laugh, has become the community’s go-to spot for woodpeckers, finches, nuthatches, doves, robins and cardinals.

In late June, weeks before his 23rd birthday, Settle released the project he had been working on for two months. St. Echelon is his luxury fashion line, inspired by his favorite high-end brands, St. Laurent and G-Star RAW. The company’s logo is a penguin because of the post-sack dance he began at Virginia Tech, and its tagline is “Never Settle.”

“You got to check me out on Instagram,” Settle said. “I think I’m fresh.”

Originally, the idea came about because, during quarantine, “I’m bored in the house, and I’m in the house bored,” Settle said, quoting a viral TikTok. But the more Settle thought about it, the more sense the idea made. He believed high-end fashion represented him well — “simple but intriguing” — and he thought the country’s cultural moment might help an online, black-owned business succeed.

Settle commissioned designs, found a local vendor and partnered with Eric Kumah, a longtime friend. They established a supply chain, built a website and marketed the product, mainly on Instagram and with teammate Greg Stroman. The combination of football, an entrepreneurial project and the upcoming birth of “Baby Tim,” the son Settle expects this week, has not fazed him.

“I’m really good off a little sleep,” he said. “Juggling everything isn’t that hard for me.”

Since the release June 26, Settle has found modest success, including several unexpected sales in Hawaii. The “pretty good profit” is nice, he said, but not the point. Clothing brands “don’t boom right away,” so he’s satisfied with the incremental progress. He hopes to add more inventory, as well as a women’s apparel line, in August ahead of the fall season.

Sitting in Columbia, Mo., watching Gus Duggerton become a juggernaut, Adams fired up a friend’s PlayStation. This summer, Adams followed as Dan “Big Cat” Katz, a Barstool Sports personality, live-streamed his play of the NCAA Football 14 video game on Twitch (which is owned by Amazon, whose chief executive, Jeff Bezos, owns The Washington Post). Katz’s made-up coach, Duggerton, became a sensation. Tennessee football welcomed him to the school on its official account, and reigning Super Bowl champion Patrick Mahomes publicly lobbied for “Coach Duggs” to stay at Texas Tech for a second season.

So Adams created his own coach: Paul Adams.

“Couldn’t think of a good name,” he lamented.

Yet Real Paul was proud of Virtual Paul. He took “a difficult route,” starting as the offensive coordinator at Middle Tennessee State before becoming the offensive coordinator at Ohio State. With the Buckeyes, he won multiple championships and, “like, 98 straight games” but was never given the head-coaching job. Just before Virtual Paul, feeling unappreciated, decided to leave Ohio State, Real Paul’s hometown high school reopened. Knowing it offered him the best training, Real Paul left his friend’s PlayStation and moved from Columbia to Nashville.

Not long after, watching the local nightly news, Adams was stunned. The TV station, a real TV station, was showing highlights from Katz’s NCAA 14 broadcast in which Virginia Tech thrashed Duggerton. Tennesseans lost a national championship they didn’t even know they were in.

The moment stuck with Adams. Recently, he admitted he felt the itch to play again. Virtual Paul had too much unfinished business.