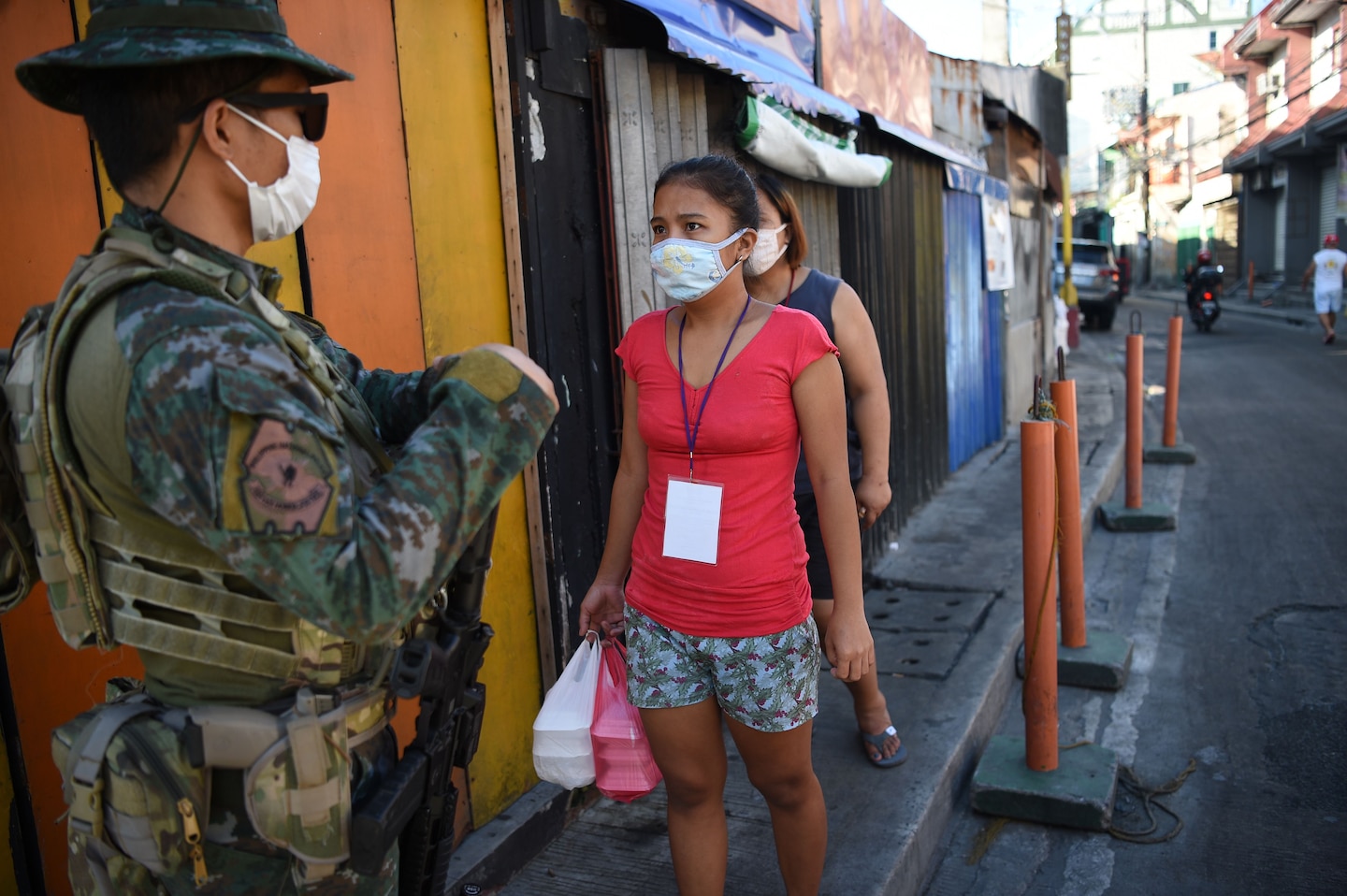 “You can’t trust the police,” said Jose, who withheld his full name to protect his safety. “There’s a chance it could get worse.”

In tackling the coronavirus in the Philippines, President Rodrigo Duterte and his officials are turning to tactics such as mass arrests and threats of state violence — methods employed to deadly effect in his war on drugs. The populist leader has enforced one of the world’s longest and most stringent lockdowns, yet with more than 82,000 cases of covid-19 and almost 2,000 deaths, the country has one of the region’s highest tolls.

“Together, we shall fight this pandemic with the same fervor as our campaign against illegal drugs, criminality, insurgency and corruption in high places and entrenched parochial interests,” Duterte said in a State of the Nation address on Monday. He defended his actions in the speech, saying the government response had prevented up to 3.5 million infections.

Authorities have arrested thousands for breaching curfew, interrupted charity and relief operations and kept suspected quarantine violators in crowded facilities where social distancing is almost impossible. In April, Duterte told police, military and neighborhood officials to shoot anyone who defied lockdown restrictions. Last week, he ordered police to arrest people who ventured out without a mask, calling it a “serious crime.”

“They think they have [Duterte’s] blessing,” Jose’s mother, Ana, said of the local officials, who released her son after she threatened legal action following the April 28 incident in a Manila suburb. The chairman of the neighborhood authority, Noel Raga, disputed Jose’s account but did not elaborate.

The iron-fisted approach has alarmed many here for its parallels with the drug war, which has left thousands dead since Duterte took office in 2016. Under pandemic lockdown, human rights groups have documented reports of abuse and raised concerns about other repressive tactics.

The Philippine National Police recorded more than 260,000 “curfew and disobedience violators,” including some 76,000 arrests, between March 17 and July 25. The country’s Commission on Human Rights received more than 900 complaints over almost the same period in the Manila metro area alone, many involving alleged torture or inhumane treatment, arrests and detention.

Guillermo Eleazar, head of the police task force overseeing enforcement of pandemic restrictions, declined to comment, but he previously said that both the police and the public should exercise mutual respect. The national police chief, Archie Gamboa, said in April that the force is open to investigative scrutiny when faced with allegations of wrongdoing and that officers were reminded about following procedure.

The Duterte administration “doesn’t know any other approach to any threat toward the country except the use of force and the curtailment of freedoms and liberties,” said Aries Arugay, a political science professor at the University of the Philippines-Diliman. “In other words, they’re a one-trick pony.”

Among the pandemic measures that drew criticism was a plan announced by Interior Secretary Eduardo Año for police to conduct house-to-house operations to take suspected covid-19 patients to government facilities. While the government later retreated on the proposal, the planned format resembled the “knock-and-plead” campaign against illegal drugs, in which suspects were sometimes killed by police in their own homes.

The related idea of using neighborhood tips to identify the sick also echoed the use of “narco-lists,” the practice of naming and shaming suspected drug users and sellers. Human rights advocates say both are susceptible to falsities and manipulation. Duterte’s spokesman later said this was not official policy and that patients would not be forced into quarantine facilities.

Nevertheless, the front-line role of the police in enforcing stay-at-home orders is under scrutiny, given the force’s documented involvement in extrajudicial killings during the drug war.

Karapatan, a human rights group, noted that when faced with allegations that they have mistreated quarantine violators, police have often resorted to defenses similar to those they used in the drug conflict, arguing that suspects fought back.

In April, a police officer shot and killed a former soldier who was later found to have had schizophrenia and post-traumatic stress disorder. Police initially said the soldier tried to draw a gun, but national investigators later found that evidence was planted. The officer and four others on the scene have been charged with murder and perjury.

The tensions come as the pandemic wreaks havoc on Filipinos’ livelihoods. Surveys in recent months by Social Weather Stations, a polling institute, found that some 5 million Filipinos experienced hunger, while 83 percent said their quality of life has worsened in the past year. Unemployment rose to a record 17.7 percent in April, according to official data.

There has been no public polling of Duterte’s performance during the pandemic, although his approval rating stood at 87 percent in a Pulse Asia survey in December. Yet dire economic hardships now threaten his standing with voters.

The pandemic is “stretching the tolerance of the Filipino people,” said Arugay, the political analyst.

“If your reality is you are worse off than before — if you lost your savings, car, mortgage … your kids cannot go to school, no amount of disinformation will convince you of an alternate reality,” he said.

After his run-in with the neighborhood officials, Jose avoids the area and does not venture too far from home, even after lockdown restrictions have eased.

If he had been brought to the police, who knows what would have happened to him, he said.