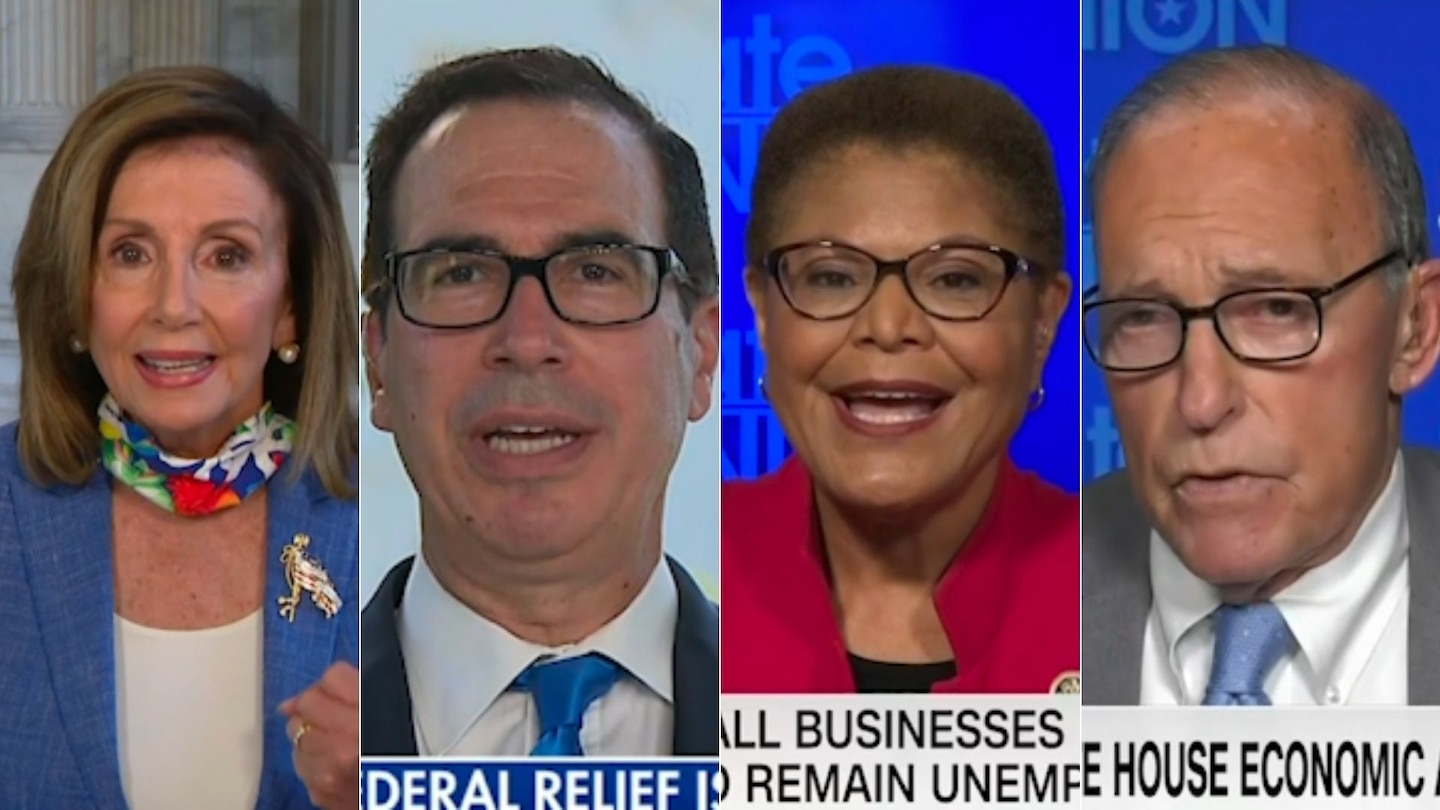 The White House officials described the talks as productive and said they would resume on Tuesday, but Democrats left the nearly two hour meeting describing the initial GOP offer as inadequate.

“We hope that we would be able to reach an agreement,” Pelosi said after the meeting. “We clearly do not have shared values. Having said that, we just want to see if we can find some common ground to go forward. But we’re not at that place yet.”

Schumer said that he and Pelosi had told the administration officials they would review the bills carefully overnight.

At the same time elsewhere in the Capitol, Majority Leader Mitch McConnell (R-Ky.) and some of his top lieutenants were briefing reporters on the package of bills assembled as the GOP negotiating position with Democrats.

But the GOP legislation contains a number of provisions not directly related to the coronavirus, including $1.8 billion for construction of a new FBI headquarters in Washington. President Trump has taken a personal interest in this project, but White House officials have not stipulated why they believe the language needed to be inserted in the coronavirus bill. Critics have alleged Trump is trying to keep the FBI building at its current location, which is diagonal from a Trump hotel property in downtown D.C.

The Trump administration previously squashed a plan to relocate the FBI building to the suburbs, which could leave the lot near the Trump hotel open for development.

“That’s a good question,” said Senate Appropriations Chairman Richard C. Shelby (R-Ala.), when asked what the FBI project had to do with the coronavirus. He said the administration had sought its inclusion.

McConnell and his team worked for days to try to put together a $1 trillion package that could unite Republicans in a way that would strengthen their negotiating power with Democrats, but there were signs Monday that Republicans remain split over how to proceed. Congress already pumped $3 trillion into the economy in March and April, a level that many Republicans believe is sufficient.

“There is significant resistance to yet another trillion dollars,” said Sen. Ted Cruz (R-Tex.). “The answer to these challenges will not simply be shoveling cash out of Washington; the answer to these challenges will be getting people back to work. And as it stands now, I think it’s likely that you’ll see a number of Republicans in opposition to this bill and expressing serious concerns.”

Bipartisan negotiations had been delayed because Democrats were waiting for the White House and Senate Republicans to unify behind a single plan, which was initially supposed to happen last week but finally occurred Monday afternoon, although it rolled out as a series of multiple bills rather than one unified package.

The White House and Senate Republican plan calls for around $1 trillion in new spending, while the House Democrats have coalesced around a $3 trillion plan they passed in May.

In the new GOP plan, Senate Republicans propose cutting weekly emergency unemployment benefits from $600 to $200 until states can bring a more complicated program online. The $600 weekly jobless benefit expires in a few days, and House Democrats have proposed extending it until January because the unemployment rate remains very high.

Senate Republicans want to put the $200 in place until states can implement a new approach that would pay the unemployed 70 percent of the income they collected before they lost their jobs. The states are supposed to phase in the new formula within two months under the new GOP plan, though it’s unclear how cumbersome that process could prove to be.

The $200 would come on top of whatever unemployment benefits states already pay. State benefits vary but generally replace 45 percent of a worker’s wages before they lost their job.

The U.S. economy remains under extreme strain five months after the first American died of the coronavirus. There have been more than 4 million cases in the United States and more than 140,000 deaths. The economy has recovered a bit from its lowest points in April, but fresh outbreaks of the virus — particularly in southern and western states — have led some governors to pause reopening plans. The labor market remains very weak and layoffs have picked up steam in recent weeks.

White House officials, Republican lawmakers and some business executives have complained that the $600 weekly payment has created a situation where some Americans are paid more to stay home than to return to their jobs.

But Democrats have countered that the money serves as an emergency cushion for millions of Americans who have been displaced by the labor market’s sudden changes, particularly when many states are reversing reopening plans.

In addition to the reduced unemployment benefits, the legislation includes a new round of $1,200 checks to individual Americans, billions of dollars for schools with some of the money aimed at helping classrooms reopen for students, and a five-year lawsuit protection for businesses, health-care providers and others.

The legislation also includes at least $100 billion more for the small-business Paycheck Protection Program. It does not contain any new money for state and local governments — a key Democratic demand — but instead gives state and local leaders additional flexibility in spending the $150 billion approved in the Cares Act in March.

Over initial Trump administration objections, the GOP plan contains billions of dollars for coronavirus testing and tracing, the Centers for Disease Control and Prevention, and foreign assistance related to the coronavirus. It also includes tax credits to encourage businesses to hire and retain workers, and increased business deductions for meals and entertainment.

Given the difficulty of reaching agreement on the multiple contentious issues at play, Meadows and Mnuchin suggested over the weekend that Congress might need to pass a narrow bill including just the unemployment insurance, schools money and liability provisions.

Democrats have rejected that approach, and McConnell has yet to publicly embrace it, either.

The question of what to do about the expiring unemployment benefits delayed a final deal last week, and Republican lawmakers scrambled over the weekend to hammer out their plan.

In March, congressional lawmakers discussed creating a federal unemployment benefits program to replace 100 percent of a worker’s prior income, but scrapped the idea because they believed states would be unable to handle the administrative complexity of doing so. Congress ultimately decided to have the federal government add a flat $600 per week to every jobless worker’s state unemployment benefits — creating a system that in some cases paid the unemployed more than what they had received while working. There are now between 20 million and 30 million people collecting these benefits, as the jobless rate is 11 percent.

The GOP unemployment insurance plan tries to both cut and overhaul existing federal unemployment benefits. The proposal, spearheaded by Senate Finance Chair Charles E. Grassley (R-Iowa), calls for giving states until October to switch over to the new system in which workers are paid 70 percent of their prior earnings. Until that point, the federal government would provide a $200-per-week benefit for each jobless worker, down from the $600 it is currently providing. States “unable” to provide the more targeted form of benefit by Oct. 5 can ask the Labor Department for a waiver to continue the flat payment for two months, the proposal states.

The GOP plan puts a cap on how much of prior income the new unemployment benefits will make up, to avoid larger sums from being paid out by the government to unemployment recipients. The legislation proposes capping at $500 the payments kicked in by the federal government, which means that workers in some states earning as little as $50,000 annually would hit the cap on wage replacement and not be compensated up to that amount, according to Ernie Tedeschi, who served as an economist at the Treasury Department during the Obama administration.

The proposal also calls for a second round of $1,200 stimulus payments that largely follows the same parameters as the payments approved by Congress in March. There are some new restrictions in the GOP plan, such as blocking dead people and prisoners from receiving the benefit, and tweaking the eligibility of dependents so they can access the $500 supplement even if they are older than 17.

Under a measure spearheaded by Sen. Tim Scott (R-S.C.), the legislation also offers a 100 percent deduction on business meals through the end of 2020 — a measure Trump has boosted as a way to encourage people to support hard-hit restaurants. Experts have pointed out few businesses are paying for their employees to eat out during the pandemic.

Congressional Democrats oppose both GOP plans to curb the benefit amount and to transition the payment system to the new model. Critics point out state unemployment offices have already been overwhelmed and would struggle with any further changes.

New parts of the legislation included a proposal from Sen. Lindsey O. Graham (R-S.C.) aimed at bringing production lines back to the United States from China, legislation by Sen. John Cornyn (R-Tex.) that would increase incentives for advanced chip manufacturing, and a measure written by Sen. Rob Portman (R-Ohio) that would address intellectual property theft at federal funded research centers and universities.

Renae Merle contributed to this report.