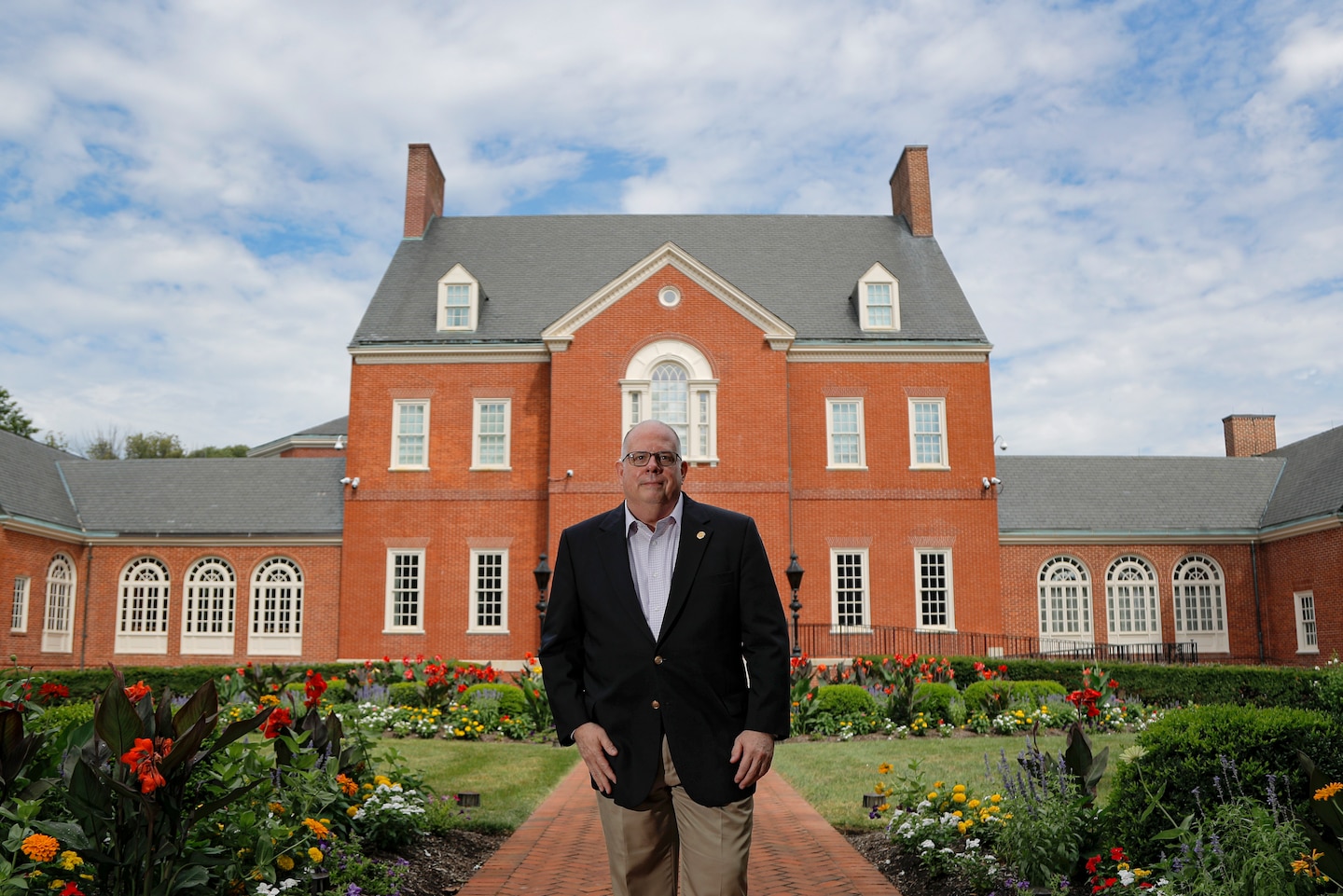 The memoir published Tuesday, “Still Standing,” introduces Hogan to national readers with revelations that will also be new to many longtime watchers. It covers his childhood as the son of a congressman who both stood up to his party and had an affair with an aide that devastated the Hogan family, sending teenage Hogan to Florida to finish high school. Hogan writes of early political defeats and a painful bankruptcy that erased millions of dollars in personal wealth. He says his cancer fight once left him weeping and terrified, among other vulnerable moments he casts as defining struggles in his life.

He also celebrates the moments that have drawn him national attention: political victories in a state viewed as hostile to Republicans and his own leading role in addressing the coronavirus pandemic. And he unapologetically documents his sharper edges and delights in his taunting rivals.

But it is Hogan’s connection to the controversial president and the governor’s rapid ascent as a national GOP figure unafraid to contradict Trump that has garnered national buzz — and growing speculation about a future White House bid.

“In a 2024 matchup, I think there will be 10 or 12 or more people fighting in the same lane to carry on the mantle of Donald Trump,” Hogan said in an interview Monday. “And there may be a lane, straight up the middle, that doesn’t really have anyone in it.”

Hogan, 64, said it’s too early to decide whether he would try to lay claim to that lane. But he also says he’s focused on determining the future of a more broad-based Republican Party that reaches out to Democrats, independents and minority voters. And, in his telling, no other GOP politician is selling that message of pragmatism right now.

“It’s probably why, I guess, I’m standing out of the crowd, because everybody seems to be on one page,” he said. “And I’m something a little different.”

Hogan won reelection by nearly 12 percentage points in 2018, even as Trump backlash helped propel Democratic victories nationwide. He writes that he initially fretted that suburban women would vote against him because of the president’s polarizing actions, which he wrote “could destroy any chance” of reelection.

“How could we convince them it wasn’t fair to vote against me because of Donald Trump?”

Even before its release Tuesday, selected book excerpts put Hogan in the national spotlight, frequently to acclaim but at times in uncomfortable ways.

Hogan writes that members of Trump’s own Cabinet encouraged him to launch a primary bid in 2020, for example, but in subsequent interviews he declined to identify the Cabinet members and characterized the conversations more mildly as an offer of general support.

On “The View” this week, host Sunny Hostin pressed Hogan on whether he contributed to systemic racism by canceling a transit project that served poor Baltimore neighborhoods. Hostin also pointed out there was no evidence for Hogan’s claim in the book that there were gang ties to the young man whose death in police custody in 2015 sparked unrest in Baltimore.

“None of that is true,” Hogan said of Hostin’s criticisms, prompting Hostin to shoot back: “Oh, it is true.”

The governor’s book details his enduring friendship with former New Jersey governor Chris Christie and the origins of his affection for Vice President Pence, who as governor of Indiana in 2014 seconded Christie’s idea to funnel $1.3 million of the Republican Governors Association’s line of credit into Hogan’s long-shot candidacy.

The infusion put the cash-poor Hogan on television in the critical final weeks of the campaign, helping him pull off one of the most stunning upsets of the 2014 cycle.

“For the first time, all alone in that hospital bed, I got scared,” Hogan wrote of his first chemo infusion. “I literally cried out loud. My chest was heaving. My breath was short. I hadn’t cried like that since my mom died. . . . This was the terror I’d been holding at a distance.”

Hogan’s cancer has been in remission for five years, but pollsters say the goodwill he garnered by openly discussing his battle has never waned, catapulting his approval ratings to 70 percent.

“I’ve never seen anything like it. It boggles my mind,” said Patrick Gonzales, a veteran Maryland pollster. “He got sick and handled it in a rather public — and rather positive — good way.”

The book’s proceeds will go to one of Hogan’s political advocacy organizations, An America United. Despite the governor’s message about needing bipartisanship to find compromise, the book details how he relishes a good zinger and delivers an unflattering portrayal of fellow Maryland leaders.

The memoir, co-written with author Ellis Henican, candidly describes election tactics designed to aggravate opponents and give voters a chuckle, such as his factually questionable “rain tax” ad in 2014 and an ill-fated attempt in 1992 to unseat Rep. Steny H. Hoyer (D-Md.) — now the House majority leader — that included passing out big rubber checks. Hogan refers to a 2014 debate moderator, a reporter who still covers the governor, as “a jackass.”

“The book certainly reveals that Hogan is and can be very combative,” Mileah Kromer, a political scientist at Goucher College in Baltimore.

Hogan brushed off the suggestion the book’s tone offers a sharper-tongued version of himself than his public image portrays: “It’s unvarnished, and I think it’s the way I am all the time.”

The book says Hogan didn’t take the concession call of his 2018 general election opponent, Ben Jealous, because the call came late and Hogan’s victory party was too noisy to hear him.

He describes that “things got fun” when he decided to rattle his 2014 Democratic opponent, then-Lt. Gov. Anthony G. Brown, at the start of a live debate. Hogan writes that he waited until the countdown clock had just a few seconds remaining, then leaned over to Brown and whispered that he could “see all your notes and read all your answers.” (Brown, now in Congress, says he does not remember that happening.)

In describing his 1992 debates with Hoyer, Hogan said he carried on at length about the House Bank scandal, attempting to tie Hoyer — who was eventually cleared of any involvement — to greenlighting the operation.

“By then, the veins were practically popping out of Hoyer’s head as he leaned over and hissed at me, “You’re such a [f—-n’] liar, Hogan,” the governor writes. “I really thought he might take a swing at me. To tell you the truth, I was hoping he would.”

Hoyer, through a spokeswoman, said he did not recall the exchange nor using profane language.

Trump, of course, is famous for jabbing his rivals. In the book, Hogan writes that he has been bracing for the president to send venom his way, but it has not arrived.

“For a while, I’d been expecting to get one of Trump’s insulting nicknames. I figured it was coming any day now,” he wrote. “I assumed he would go with ‘Fat Larry,’ an obvious choice as I had admittedly put on some weight since my cancer battle. Or maybe ‘Cancer Boy.’ That would be a good one. But it didn’t happen.”

So far, Hogan said Monday, Trump appears to have largely ignored him and his memoir: “He’s been very reserved, and I’m not sure the reason for that. I mean, I’m glad. I’m not looking for a tussle.”

Hogan said he decided not to challenge Trump in the 2020 primary because the president’s deep appeal within the party base made it impossible to win. “Time will tell,” he added, whether future Republican primary voters will have an appetite for the brand of politics he’s trying to sell.

“Maybe there’s no market for that. And maybe the party will keep going in the direction it is, or maybe not,” Hogan said. “Maybe they’re going to reexamine themselves and get back to where the Republican Party used to be.”