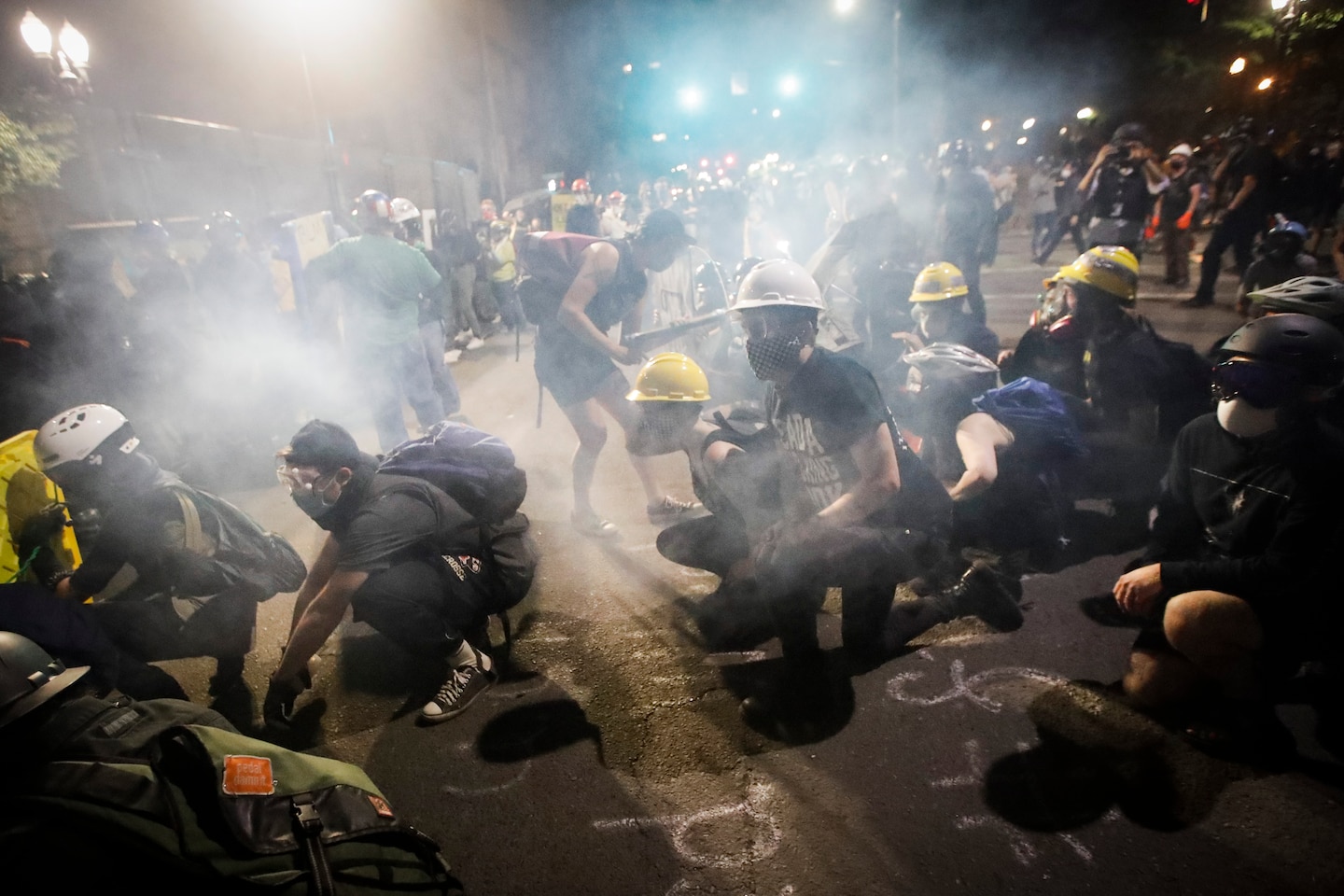 Such moves would mark a significant expansion of the federal force operating at the Portland federal courthouse — there were 114 federal agents there in mid-July — though it is unclear how many existing personnel could be sent home after the arrival of at least 100 reinforcements, according to internal Marshals emails.

The Trump administration has responded to protests and vandalism in Oregon’s largest city with a shock-and-awe strategy, using a sudden escalation in force by ­camouflage-clad federal agents.

That may yet work as a campaign tactic, if it provides Trump a way to sell himself as a law-and-order candidate, the antidote to chaos that developed on his own watch.

But as a policing tactic, it has failed to suppress the protests. The escalation has been followed by larger, better-equipped and more-aggressive crowds, and — as the new reinforcements showed — it exhausted federal resources before it exhausted the protesters.

“Every time we go out into this, we get better at it,” said Gregory McKelvey, 27, a community organizer in Portland. “When a flash bang first goes off in front of you, you run. But when you realize that one went off right in front of you and nothing happened to you, you’re less likely to run the next time. It makes people band together and say, ‘No, we’re not backing down.’ ”

As the nightly street battles in Portland have gotten more attention, they have triggered internal investigations into the conduct of federal agencies like the Marshals Service and CBP. Some federal law enforcement officials worry that agents in Portland may be losing control of the streets around the federal courthouse and losing the public debate over their handling of the unrest, according to three people familiar with the internal conversations who were not authorized to discuss them with reporters.

There is growing concern among federal law enforcement officials that some individuals in the crowds outside the courthouse have gotten more aggressive in recent days, and that the number of federal agents on site may not be sufficient to handle them. Protesters have injured federal agents with large commercial-grade fireworks while others aimed lasers at their eyes, leading to several injuries, DHS officials said.

Now officials and demonstrators in other cities that have experienced ongoing protests against police violence fear that federal agents will bring the same tactics to them.

In Seattle, protesters who saw camouflage-clad officers standing in their streets at a distance on Sunday wondered if they were the federal agents who were seen snatching protesters off the streets of Portland.

“We don’t even know who we’re dealing with,” said one protester, Madeline, who declined to give their last name because they feared police retribution.

Trump has said that federal officers have not been sent to Seattle. Worried that this might change, a Seattle group has copied one strategy used in Portland: organizing a “Wall of Moms” to stand between protesters and police. Christine Edgar, one member of the Seattle group, said that so far they have had mixed results inserting themselves in between protesters and Seattle police.

“At several points, moms tried to get between police and protesters and were hurt doing that,” Edgar said. “Because we formed so quickly, we didn’t have a clear strategy on how to do that, but a lot of brave moms linked arms and did that whenever they could.”

In Aurora, Colo., Mayor Mike Coffman (R) worried that his local police were facing protesters who had been radicalized by the clashes they had heard about in Portland. On Saturday, after a protest over the 2019 death of 23-year-old Elijah McClain in Aurora police custody, someone broke windows in the city’s municipal complex.

Coffman wrote on Twitter that provocateurs unaffiliated with the main protest had “sought to bait the police into a confrontation and to destroy as much public property as possible.”

A protest in Austin turned fatal on Saturday when a driver navigated his vehicle toward the marchers and fired at 28-year-old protester Garrett Foster, who had brought an assault rifle to a march, police said.

The driver — fired upon by a third armed man at the scene — was not injured, officials said, and police released him while their investigation continued.

On Sunday evening, other protesters remembered Foster, who had been a regular at past marches about police brutality. They said his death would inspire others to join the cause, chanting, “He didn’t die, he multiplied!”

But some worry that the incident will lead to more guns at the protests, increasing the chances of violence. “It’s hard to see how more weapons in a charged environment will help keep things safer when it seems to do more to escalate situations,” said Jimmy Flannigan, a member of the nonpartisan Austin City Council, who supports the protesters.

Portland has been the scene of long-running protests over police mistreatment of minorities, with demonstrators’ anger increasingly focused on a large federal courthouse downtown. Confrontations between the heavily armed federal agents and black-clad protesters have intensified in recent weeks, and Trump administration officials have pledged to defeat the “violent anarchists” they say are trying to burn down the building.

Portland Mayor Ted Wheeler and city Commissioner Jo Ann Hardesty, who has long been a vocal critic of police use of force, announced late Monday that they were calling for an “immediate meeting” with DHS officials on the ground in Portland and with acting Homeland Security secretary Chad Wolf “to discuss a cease-fire and the removal of heightened federal forces from Portland.”

DHS did not immediately respond to a request for comment.

Local officials have accused the Trump administration of making the situation worse and have called for the federal agents to leave the city. Congressional Democrats also have criticized the administration’s response, accusing the president of using conflict as a rallying point for his reelection.

Rep. Earl Blumenauer (D-Ore.) said the federal agents’ tactics had already worsened the unrest on Portland’s streets, and he was concerned that the president would continue to escalate the tensions.

“I’m worried that Trump will force things to get even more out of hand and that will likely lead to worse violence,” Blumenauer said. “It doesn’t take much of a spark when you’ve got these extremes.”

Federal officials have also discussed creating a second, stronger fence around the courthouse that would be more resistant to nightly efforts to move or dismantle it, and would form a more secure area where protesters could not bring gas masks, shields or weapons, according to people familiar with the discussions. It’s unclear how seriously officials are considering this, however.

Outside the current fence, it is easy to see evidence that protesters have adapted to the escalated use of force.

Along the base of the re­inforced iron fence, a line of shields — homemade plywood rectangles with handles made of rope drilled through the center — sit, waiting for their moment.

On some, black marker announces that they’re free for the taking. A pile of plastic storage-bin lids and barrel bottoms wrapped with pool noodles — to better repel batons and projectiles — sits in the park across the street from the courthouse.

On Saturday, the largest crowd Portland protests have seen since the earliest days of the demonstrations that followed George Floyd’s death gathered in the street, chanting, shouting, dancing to drumbeats and bouncing a beach ball through the air. On the side of the Multnomah County Justice Center, which houses the county jail, demonstrators projected the words “Fed goons out of PDX,” referring to the city by its airport code.

Though many newcomers had arrived carrying little more than a sign and wearing a cloth face covering — because of the still-raging coronavirus — the more-seasoned in the crowd had amassed a small arsenal of protective equipment: helmets, kneepads, motorcycle armor, gas masks, respirators, a snorkeling mask jury-rigged to withstand tear gas.

At one point, some people in the crowd began to shoot fireworks up toward the broken windows of the federal courthouse. Federal agents burst through the plywood-reinforced doors of the building and rushed forward toward the fence line. They shot “less-lethal” munitions through dark squares cut into the boards.

Explosions burst into the night as protesters fell into a familiar choreography: Those without respirators fell back as tear gas clouded the air. Those who wore masks able to withstand the barrage of chemical agents ran forward, many carrying shields to press up against the fence and block federal officers from firing stun grenades, pepper pellets, rubber bullets and paintballs into the crowd.

Some began to shake the fence, pushing it back and forth to the beat of drums or chants. Others lobbed water bottles and other household objects — some of them still crying and coughing from the burn of the gas as they wound their arms back to throw. Volunteer medics pulled retching, coughing people to safety back behind the tree line of the park, where someone had strung up half a dozen box fans to repel the gas.

After a short break, with protesters returning to passing a beach ball and blowing bubbles into the air, the pattern repeated.

About half a dozen people were arrested in downtown Portland on Saturday after police declared a riot and ordered those gathered to leave the area. About 18 others were charged with federal offenses after being arrested near the courthouse last week.

As people gathered on Sunday, they joined in a chant led by a demonstrator with a microphone standing on the steps of the Justice Center.

“Portland, you scared?” he called.