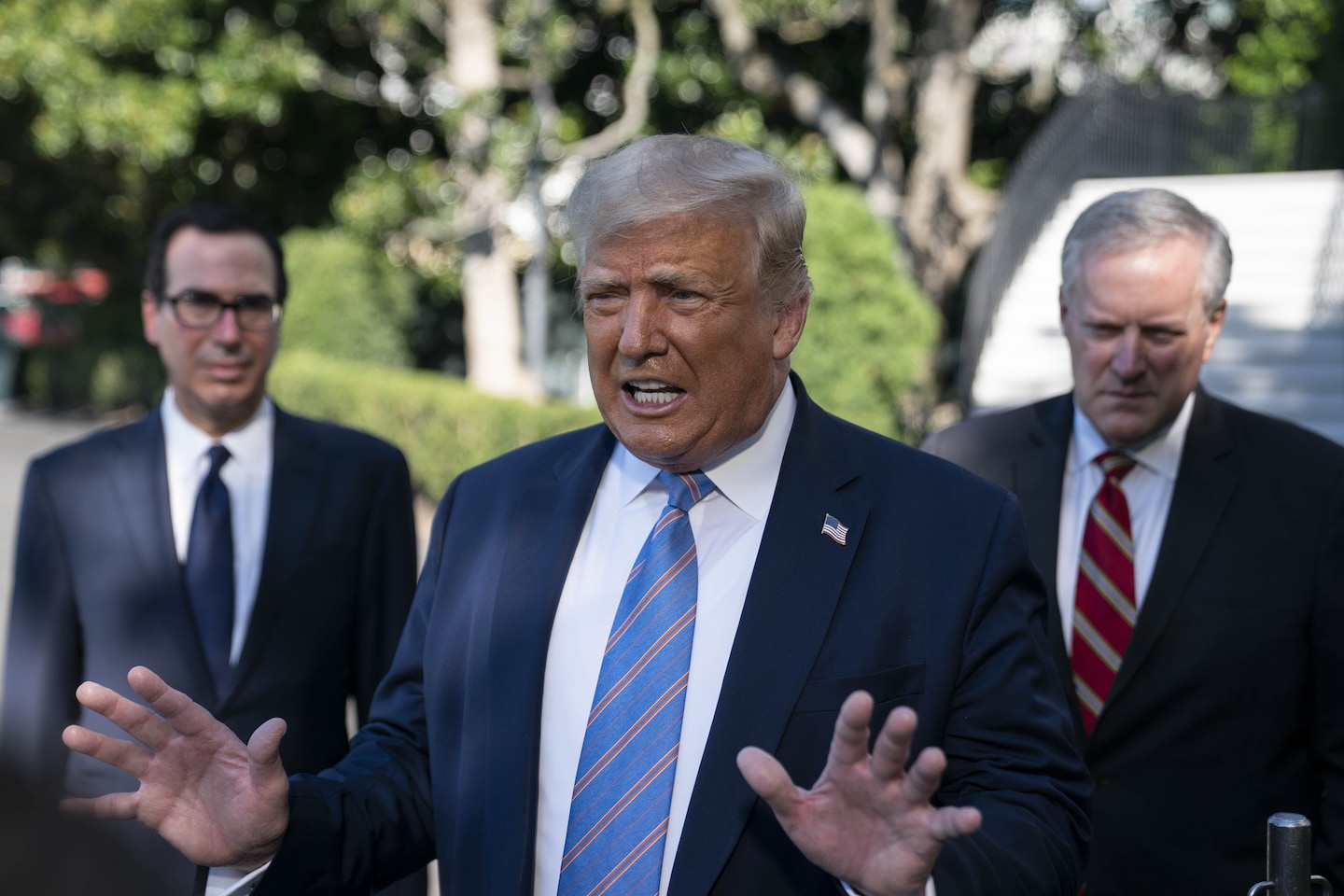 After a day of meetings, all parties declared their differences all but irreconcilable. Democrats shot down the idea of a short-term fix for unemployment insurance and the eviction moratorium, which President Trump had announced earlier Wednesday he would support. And the two parties remained far apart on a larger bill, with Democrats standing by their wide-ranging $3 trillion proposal even as Republicans struggled to coalesce around a $1 trillion bill released by Majority Leader Mitch McConnell (R-Ky.) on Monday.

Each side said the other was to blame for the failure. Paying the price will be the unemployed at a moment of deep uncertainty and fear, with coronavirus cases spiking and states pulling back on reopening as deaths near 150,000 in the United States. The talks could get back on track in coming days, but the signs Wednesday were not promising.

“I don’t know that there is another plan, other than no deal,” said White House Chief of Staff Mark Meadows. “Which will allow unemployment, enhanced unemployment, I might add, to expire. … No deal certainly becomes a greater possibility the longer these negotiations go.”

Meadows offered his dour assessment as he headed into his third straight day of meetings with House Speaker Nancy Pelosi (D-Calif.) and Senate Minority Leader Charles E. Schumer (D-N.Y.) at the Capitol. He was no more upbeat when he came out.

“We are nowhere close to a deal,” Meadows said.

Democrats echoed his pessimistic assessment, while putting the blame on Republicans.

“Our Republican friends don’t seem to come close to meeting the moment. … They’ve put us up against the wall. We have two cliffs because they wouldn’t negotiate for months,” Schumer said.

“They’re tied in a total knot because of the disunity in their caucus, because of their inability to gather votes, because the president says one thing one day, he says another thing the other day,” Schumer added. “We want to come back and keep talking to them. But they don’t have anything to say.”

McConnell held out hope in an evening interview with PBS NewsHour, saying: “This is only Wednesday. So hope springs eternal that we’ll reach some kind of agreement, either on a broad basis or a more narrow basis to avoid having an adverse impact on unemployment.”

Earlier Wednesday Trump had called for a quick fix to address the unemployment benefits and eviction moratorium, saying other issues could wait.

“The rest of it, we’re so far apart, we don’t care, we really don’t care,” Trump told reporters outside the White House, referring to divisions between the two parties.

“We don’t know why the Republicans come around here with a skinny bill that does nothing to address really what’s happening with the virus, and has a little of this and a little of that. We’re not accepting that,” Pelosi said. “We have to have the comprehensive full bill.”

McConnell has not embraced the piecemeal approach either, insisting any bill must include a five-year liability shield for businesses, healthcare providers and others — a non-starter for Democrats.

More than 20 million Americans remain unemployed and have been receiving a $600 weekly emergency unemployment payment that Congress approved in March, on top of whatever benefit their state offers. That extra federal benefit runs out Friday.

Democrats want to extend the extra jobless payment at its current level. The Senate GOP bill released Monday proposes cutting it to $200 weekly until states can phase in a new system that would aim to replace 70 percent of a worker’s wages before unemployment.

Underscoring the continued need, the head of the Federal Reserve said Wednesday that rising coronavirus cases since mid-June are beginning to weigh on the economy, based on consumer credit card spending and hotel occupancy data as well as some labor market indicators.

“On balance, it looks like the data are pointing to a slowing in the pace of the recovery,” Federal Reserve Chair Jerome H. Powell said during a news conference Wednesday. “I want to stress it’s too early to say both how large that is and how sustained it will be.”

Powell said funding from the $2 trillion Cares Act passed in March was key to keeping people in their homes and jobs. He pointed to the success of the small-business Paycheck Protection Program for getting money directly to businesses that couldn’t necessarily have been saved through a Fed lending program.

“Lending is a particular tool, and we’re using it very aggressively, but fiscal policy is essential here,” Powell said. “As I’ve said, more will be needed from all of us, and I see Congress is negotiating now over a new package, and I think that’s a good thing.”

But the negotiations are not going well. Democrats want to spend three times more than Republicans on the overall bill, expected to be Congress’s last major coronavirus relief bill before the November election. They also are insisting on a new round of state and local aid, which was excluded from the GOP bill.

Some Republicans don’t want to spend any more money at all, and there are deep divisions over the $1 trillion bill McConnell released Monday, which proposes to send a new round of $1,200 stimulus checks to individual Americans and inject more money into the Paycheck Protection Program, among other provisions. McConnell said in his PBS interview that there are about 20 GOP senators who would prefer to take no additional action because of deficit concerns.

A number of Republican senators signaled Wednesday they were open to some kind of short-term, stand-alone deal — but also said there was no clarity on what that might actually entail, or on much of anything at all.

“There’s no consensus on anything,” Sen. John Cornyn (R-Tex.) told reporters twice after a closed-door lunch with Meadows and Treasury Secretary Steven Mnuchin. He described this as “A normal part of the catharsis that goes with actually getting to the solution,” while noting: “We’re far away right now.”

McConnell is leaving negotiations with Democrats to Trump administration officials. The whole process has been overtaken by increasingly bitter partisanship, which was on display on the Senate floor Wednesday as McConnell and Schumer traded insults.

McConnell accused Democrats of adopting a “completely unhinged position” in insisting on continuing the $600 weekly emergency unemployment benefits. Republicans say such generous payments act as a disincentive for people to return to the workforce, given that in many cases they can make more on unemployment.

Referring to Pelosi, McConnell said, “She’ll just refuse to legislate until the election and wish American families good luck dealing with the pandemic.”

Schumer denounced those comments in his own floor speech a short time later.

As time runs out on the expanded jobless benefit, Sen. Mitt Romney (R-Utah) has started crafting an alternative unemployment insurance proposal, according to an official familiar with the draft.

The plan would allow states to choose one of two options, the official said: either a jobless benefit supplement that amounts to 80 percent of the initial wage, or a sliding scale that would amount to an additional $500 per week in August, $400 per week in September and $300 per week in October. The official spoke on the condition of anonymity to describe a plan that was still being drafted.

Trump’s push for an extension of the eviction moratorium came even though the GOP legislation released by McConnell did not include it. The eviction moratorium provision, which was passed as part of the Cares Act in March, shielded 12 million renters nationwide from eviction — but it expired Friday. House Democrats have pushed for it to be extended.

McConnell and multiple other Republicans have said they oppose inclusion of the FBI headquarters provision.

“Then Republicans should go back to school and learn. They need a new building … and we can do it very easily,” Trump said.

Congress passed four bipartisan bills in March and April, injecting about $3 trillion into the economy as the coronavirus began its deadly and economically devastating march across the country. At the time lawmakers hoped the pandemic would die down; instead it’s been spiking in many places.

Rachel Siegel and Paul Kane contributed to this report.