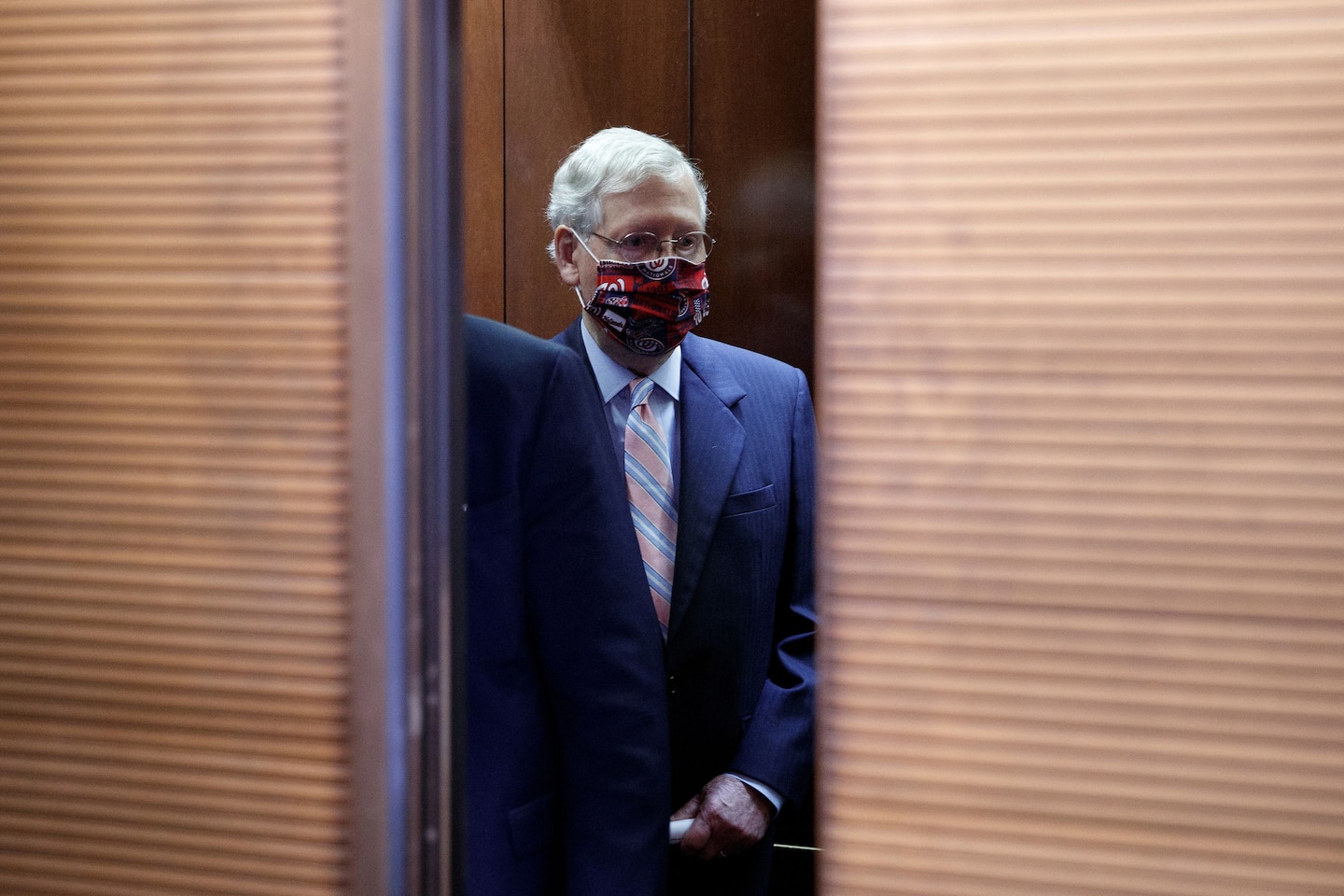 Sen. John Thune (R-S.D.) said Congress might have to pass a stand-alone extension of the unemployment benefits, a piecemeal approach that administration officials have floated but that Senate Republican leaders had avoided publicly embracing before now.

“If things are, the wheels have come off by then, then I think it would probably argue for doing something skinnier or smaller and then, you know, regrouping,” Thune told reporters. “But again, we’ll know a lot more about that in the next few days.”

If the wheels were not entirely off Tuesday, negotiations were not off to a great start. Democratic leaders accused McConnell of not wanting a deal at all, while one Republican senator called the new GOP bill “a mess.”

At the White House, Trump was asked if there were elements of the bill he opposed.

“Yeah, there are, actually. And we’ll be talking about it. There are also things that I very much support,” the president said. “But we’ll be negotiating. It’s sort of semi-irrelevant because the Democrats come with their needs and asks and the Republicans go with theirs.”

McConnell told reporters that he did not support $1.8 billion for a new FBI building included in the bill at the behest of the Trump administration, calling it “non-germane” and declaring, “When we get to the end of the process, I would hope all of the non-covid-related measures are out.”

And McConnell acknowledged divisions among Senate Republicans over the legislation, which he unveiled Monday after days of delay.

The problems arose even before negotiations began in earnest with Democrats, who lobbed insults at Republicans over their divisions and what Democrats called the inadequacy of the GOP bill at a moment of deep economic uncertainty. Close to 30 million Americans remain unemployed and the economy is at a precarious juncture, with coronavirus cases spiking and some states pulling back on reopening plans.

Democrats want to spend three times more than the $1 trillion in the GOP package, and they support continuing the $600 weekly enhanced unemployment insurance benefits that expire days from now. The GOP plan would slash the $600 payments to $200 per week until states can transition to a complex new system aimed at replacing 70 percent of what a person earned before they lost their job. Republicans argue that the current benefit gives people an incentive to stay out of work.

Democratic leaders also balked Tuesday at a five-year liability shield included in the GOP plan, aimed at protecting health-care providers, schools, employers and others from lawsuits from people who become ill from the virus. McConnell has repeatedly described the liability provision as his one “red line” in the talks.

“That is no way to negotiate, particularly when his provision is so extreme. … It’s a radical change of all liability law,” Senate Minority Leader Charles E. Schumer (D-N.Y.) said after he and House Speaker Nancy Pelosi (D-Calif.) met with Treasury Secretary Steven Mnuchin and White House Chief of Staff Mark Meadows for their second day of talks.

“It seems to me Senator McConnell really does not want to get an agreement made,” Pelosi said.

Democrats have indicated to top White House negotiators that they are unwilling to reduce the current level of enhanced unemployment benefits, and they are also pushing for nearly $1 trillion in state and local aid, which was entirely excluded from the GOP package, Meadows told reporters late Tuesday.

The reception from some Republicans was not much more positive than the Democratic reaction.

“It’s a mess. I can’t figure out what this bill’s about,” Sen. Josh Hawley (R-Mo.) said after a closed-door GOP lunch attended by Meadows and Mnuchin. “This is not going to be the bill. They’re going to go negotiate with Pelosi. We have no idea what the final bill will be, and we’ll be the last to know.”

Inside the lunch, Sen. Mitt Romney (R-Utah) suggested a more gradual phasing-out of expanded unemployment benefits than what is outlined in the GOP bill, proposing that the benefits scale down by $200 every 30 days for three months rather than being cut overnight by two-thirds, according to a person with knowledge of his comments who spoke on the condition of anonymity to describe them.

“I’d like to see us deal with unemployment more rapidly than I think is going to take for the entire legislation to be completed,” Romney told reporters later.

Trump offered assurances that the unemployment aid would be extended, telling reporters at the White House: “We’ll do something. We’re going to take care of the people.”

Sen. John Neely Kennedy (R-La.) said he opposes the GOP plan to have states switch their unemployment benefits to a wage replacement scheme. “Many of our state departments of labor — they just got microwaves last week, much less being able to reprogram the computer in 60 days to effectuate a complicated formula,” he told reporters.

Kennedy also suggested that many other GOP senators were frustrated by the proposals. “Some of my colleagues are not either as crazy or candid as I am, and they’re not going to say anything, but I’m not the only one,” Kennedy said. “And I still don’t know what’s in the bill. … You can’t assess something if you don’t know what’s in it.”

The bill also includes a new round of $1,200 stimulus checks to individual Americans; about $105 billion for schools, with some of the money tied to reopening; a large new injection of funds for the small-business Paycheck Protection Program; and $30 billion for the Pentagon, including hundreds of millions of dollars for projects the Trump administration had canceled to pay for the border wall. There’s also new money for coronavirus testing and tracing and federal health agencies, despite initial opposition from the administration to those expenditures.

The money for the FBI headquarters is an issue in which Trump has taken a personal interest. The aging building sits diagonally across the street from his hotel in downtown Washington, and plans had been in place to move the agency to the suburbs.

Moving the building could leave the lot open for redevelopment, but Trump has said he would instead like to see a new FBI building erected on that spot, perhaps with a track for running laps on top of it.

Asked about including the money for the FBI building in a bill that is supposed to be aimed at fighting the coronavirus, Meadows conceded Tuesday that there was no connection between the building and the pandemic that has now killed more than 146,000 Americans.

“There are a number of things in the last bill that had nothing to do with the coronavirus. I think everybody acknowledges that it’s a funding mechanism,” Meadows said of the legislation, which Republicans have been laboring to keep at $1 trillion so fiscal conservatives don’t revolt. Meadows called the money for the FBI headquarters “just a pressing need.”

Multiple GOP senators criticized the inclusion of the FBI money.

“I don’t understand. I mean, if somebody can explain to me how — I just don’t get it, I mean, how’s it tied to the coronavirus?” said Sen. Rick Scott (R-Fla.). “During the pandemic, let’s focus on solving the problem.”

Sen. Patrick J. Toomey (R-Pa.) criticized the $1,200 stimulus payments that Republican leadership included in the legislation. “The vast majority of direct payments went to people who did not have any lost income, and we’re going to do that again except on a bigger scale,” Toomey said.

“The Republicans will be divided on this one,” he added in an interview on CNBC on Tuesday morning. “We’re already spending a tremendous amount of money, and that’s before Speaker Pelosi gets her pound of flesh.”

Sen. James Lankford (R-Okla.) was among several GOP senators who said they have concerns about the overall cost of the bill, after Congress spent $3 trillion in March and April trying to prop up the economy.

“We need to spend what we have to spend, and not a dime more. This perception that’s being pushed right now is that we need to make everyone whole, I adamantly disagree with,” Lankford said. “You can’t make everyone whole in the whole country … that’s absurd.”