Aboard rented houseboats, vacationers take to the water at a safe distance 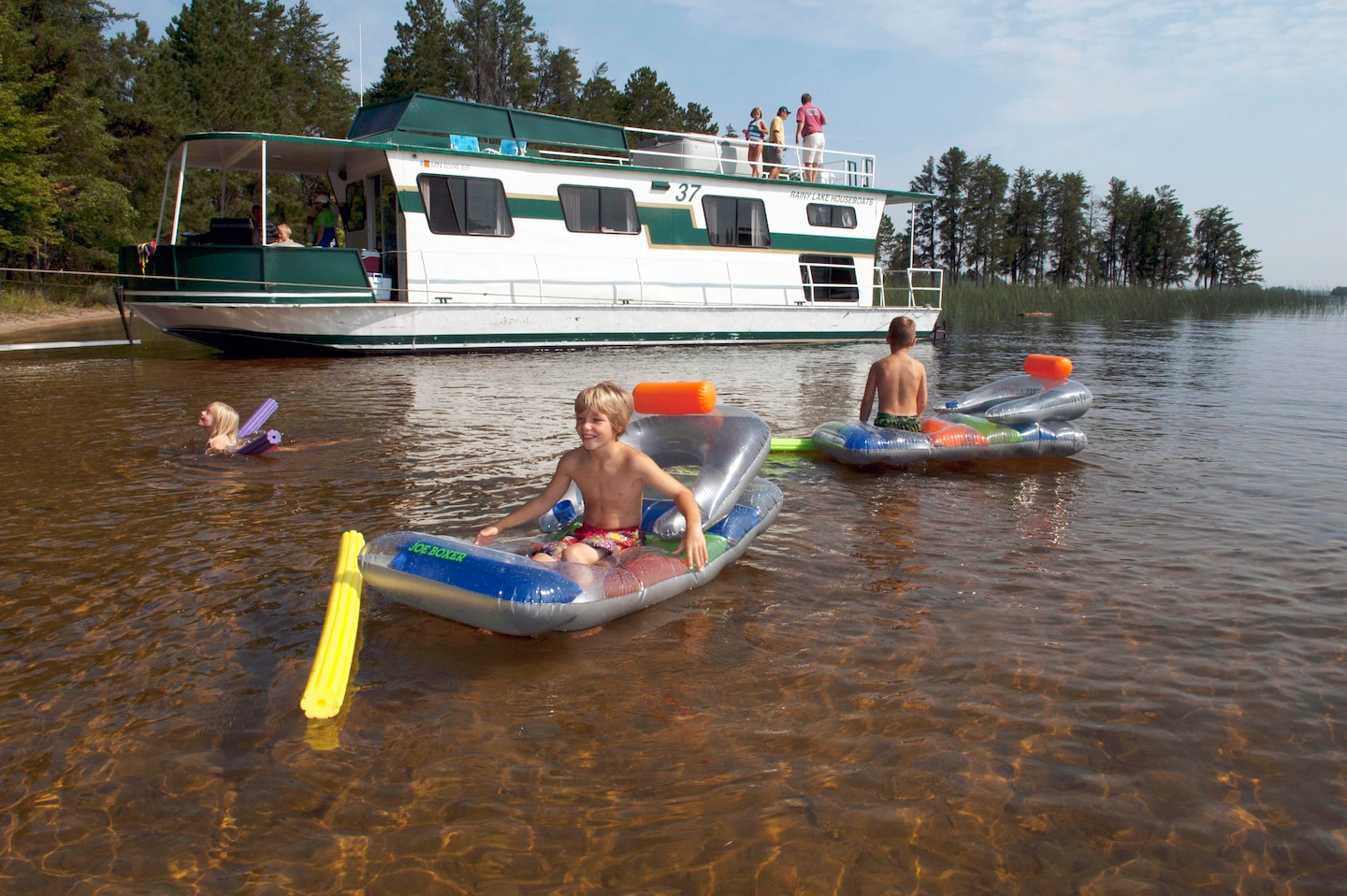 In national parks, state and national recreation areas, and along some rivers, a houseboat vacation begins as follows: Check in at the marina and get a quick lesson on piloting a houseboat. Load up all the food, luggage and gear you’ll need for the duration of your trip, then head out into the watery wilderness.

You may see other boaters, but it’ll be from a distance. Unless you need fuel, food or other provisions — unlikely if you’ve planned ahead — you don’t need to see anyone outside your boat for the duration of your holiday. And that isolation — being with a known group but being far away from everyone else — certainly has a newfound appeal in 2020.

“We’re having one of best years ever,” says Bill Dougherty, co-owner of Rainy Lake Houseboats in International Falls, Minn. His family has run tourism ventures on the lake for 102 years and currently rents 27 houseboats.

Dougherty is particularly pleased that more families with young children are renting, partly as a result of summer sports and camps being canceled. Instead, he says, “families are out there having the time of their life. They leave everything behind, and no one tells them where to go or what to do.”

That freedom, according to other houseboat purveyors, is a big part of the draw. Houseboating, says Robert Knowlton, general manager of Lake Powell Resorts & Marinas in Arizona, allows you to get out in nature and “find your own private piece of paradise.” And the charms of that solitude are not just for families. Chad Taylor of Lake Mead/Mohave Adventures, says many a high-profile CEOs rent houseboats from his Nevada marina “because they like to get out on the lake and hide out for a week.”

So what does a group actually do while hiding out on a houseboat for a week? Activities depend on the whims of the body of water.

On Rainy Lake, a glacially carved lake formed more than 10,000 years ago, houseboaters can motor during the day, though most choose to tie up at any of the first-come, first-served moorings on the U.S. side of the lake — Americans can’t currently cross into Canadian waters — and spend their days exploring trails, playing on sandy beaches, and fishing, floating, swimming and birdwatching.

Most of Dougherty’s boats come with waterslides, and guests can rent or bring their own small motorboats, canoes, kayaks and stand-up paddleboards. He recommends boaters pick a different mooring every day, to see as many of the lake’s bays, islands and rock formations as possible.

On Lakes Powell and Mead, the surreal desert and canyon landscapes of these dam-formed lakes tempts houseboaters to anchor on a sandy beach and use it as a base for exploration. Lake Mead’s 550 miles of shoreline mean you can easily have a beach all to yourself and spend the week swimming or riding Jet Skis, and skiing, tubing and exploring with a smaller, tow-behind motorboat.

On Lake Powell, 2,000 miles of shoreline and the nearly 100 slot canyons of Glen Canyon lure hikers, while the lake allows motorized and nonmotorized watercraft. Kids, Knowlton says, are usually content to be in the water all day, tubing and “going up and down the slides nonstop.” He says families with older kids are wise to bring along footballs, Frisbees or a cornhole game.

Broadcast journalist Kellie Burns-Garvey recalls a trip on Lake Powell with 14 family members ages 2 to 75. The kids loved the waterslide, and adults had time to relax. In a week, she says, “we swam, explored rock formations, and never really saw anyone else.”

A more tropical experience awaits on Florida’s St. Johns River. Houseboaters who rent from Holly Bluff Marina in DeLand, located northeast of Orlando, can motor within a 50-mile radius of the marina, and discover abundant wildlife, clear springs suitable for swimming and snorkeling, and even some riverside restaurants. Boaters usually anchor on the water, as the river shoreline typically has dense vegetation — as well as the occasional alligator.

Other than on Florida’s reptile-rich riverbanks, campfires on the beach and stargazing are the prime after-dark activity for houseboaters. Las Vegas food stylist Roni Fields-Moonen, who spent a Thanksgiving houseboat vacation on Lake Mead, said most evenings consisted of “bonfires, marshmallow roasts and singalongs.”

Though amenities vary from vendor to vendor, houseboats generally come equipped with everything you would find in a typical vacation rental, including cooking gear and all or most linens, plus safety equipment and a ship-to-shore radio with 24-hour emergency support. Fuel is charged based on consumption — boats leave the dock with a full tank and you only pay for what you use. Towable skiffs, Jet Skis (not legal on all waterways), kayaks and other toys are extra.

Boaters need to bring their food, clothes and recreation gear. Food, especially, requires planning, since there are no grocery stores in the middle of wilderness areas. Fields-Moonen and her husband, Rick, a professional chef, packed coolers full of carefully labeled groceries, including a whole turkey they roasted in the boat’s ample kitchen. With 10 mouths to feed, meals had to be planned down to the last ingredient, and Fields-Moonen recalls a lot of cooking and cleaning and that “food took up more space than luggage.”

Houseboats can range from basic to luxury. Burns-Garvey says their Lake Powell boat was “like a camper — not luxurious but comfortable enough,” while Fields-Moonen and her group rented a deluxe model with a hot tub, five bedrooms, satellite TV and room on the top deck for morning yoga and Pilates sessions.

Piloting the boats is straightforward and some marinas, like Lake Powell, offer piloted service in and out of the marina. “We rent all the time to first-time boaters,” Knowlton says. Apart from the rare afternoon thunderstorm, weather is seldom a factor. Still, he says, boaters should keep an eye on the forecast — though the marina will radio if there are any serious weather concerns. On both Lakes Powell and Mead, purveyors advise that in a week’s time, it makes sense to move the houseboat no more than two times, largely because anchoring is labor-intensive and time-consuming.

Prices for houseboats naturally depend on the size, the season and the number of bells and whistles. At Rainy Lake, cozy two-person “honeymooner” models rent for $1,380 a week in peak summer while deluxe 54-foot, 12-person boats with hot tubs rent for $5,795 in the same period. A four-person houseboat from Holly Bluff Marina in Florida rents for $1,500 in high season. The marina’s most deluxe boat, a 60-foot model with four bedrooms and two bathrooms, rents for up to $3,400 for a week.

From Lake Mead/Mohave Adventures, a 59-foot, 10-person houseboat rents for $5,269 in high season, while a mammoth 70-foot model with a wet bar, hot tub and multiple satellite TVs is just over $8,000 a week. Lake Powell Resorts & Marinas rents 46-foot, economy houseboats for up to six guests for about $2,500 a week from June through August. Its top-of-the-line, 75-foot Odyssey model sleeps up to 16 people in 2,400 square feet of cabin space across three levels. In high season, it’s $15,000 per week. Everything’s bigger out west, after all, and houseboats are no exception.