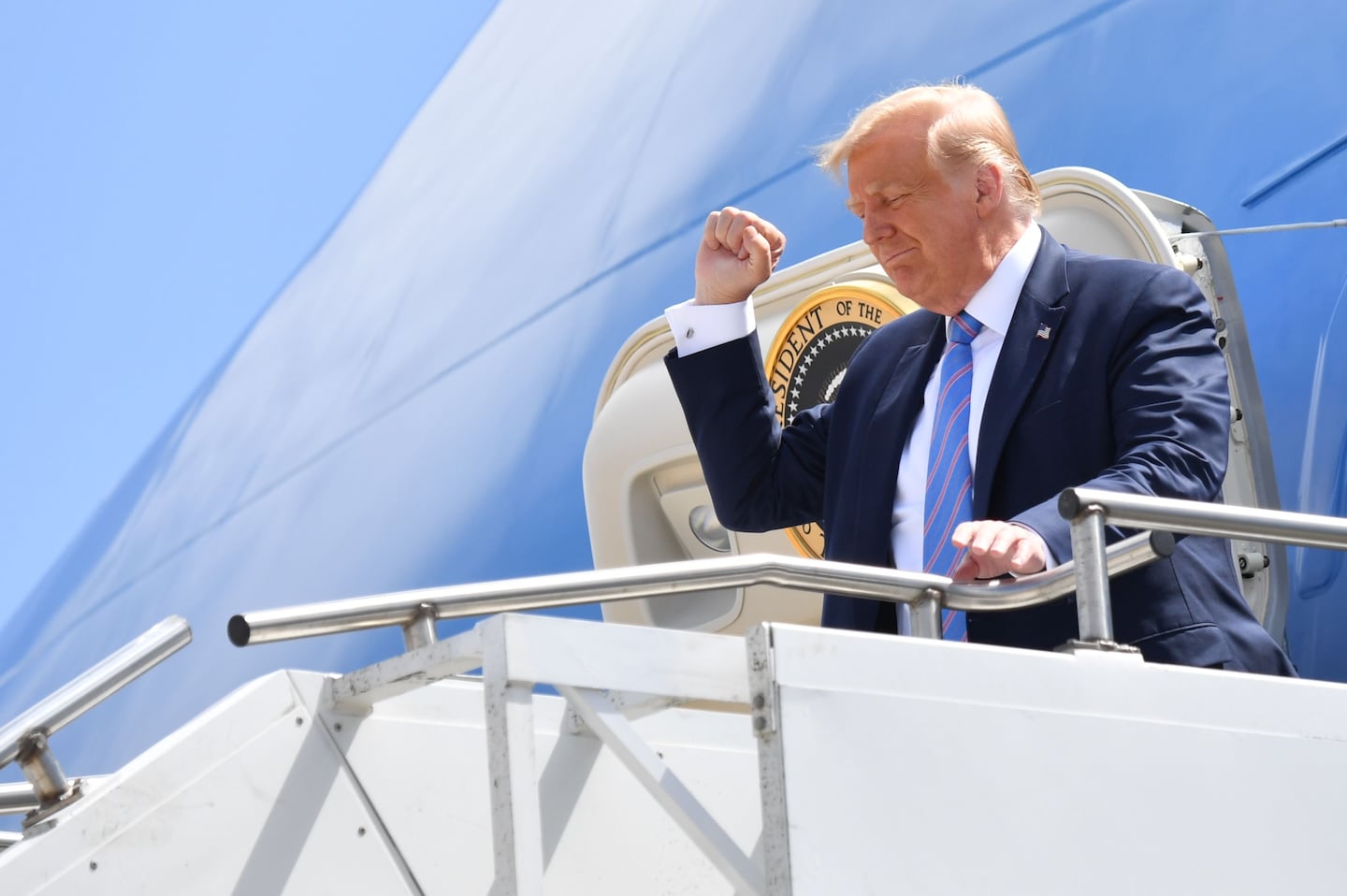 Swan: “It was in your written brief, though.”

Swan: “Do you read your written brief?”

Trump: “I do. I read it a lot. I read a lot. They like to say I don’t read. I read a lot. I comprehend extraordinarily well, probably better than anybody you’ve interviewed in a long time.”

Trump rarely gets fact-checked on camera, but here we have a good example of an interviewer pressing and prodding on a sensitive topic.

The president has been dismissive of U.S. intelligence reports that Russia offered bounties to the Taliban to kill U.S. troops in Afghanistan. (A “hoax” or “fake news,” Trump says.)

Follow-up questions in a one-on-one setting can expose the strength or weakness of a claim. When asked about reports that he was briefed on the intelligence, and why he didn’t raise the bounties in a call with Russian President Vladimir Putin, Trump started dissembling in response.

White House officials were first informed in early 2019 of intelligence reports that Russia was offering bounties to Taliban-linked militants to kill U.S. and allied military personnel in Afghanistan, but the information at the time was deemed sketchy and in need of additional confirmation, sources previously told The Washington Post.

More recently, this year, current and former intelligence officials familiar with the intelligence said it was less ambiguous than White House officials and some lawmakers have portrayed. The CIA, in particular, has been analyzing the intelligence for several months and has assessed that the Russian program is real, The Post reported.

Intelligence analysts think the bounties probably resulted in the deaths of three Marines killed in April 2019 when the vehicle they were traveling in was blown up just outside Bagram, the largest U.S. air base in Afghanistan, sources told The Post.

Some of Trump’s senior intelligence officials viewed information about the bounties as credible enough to warn the Defense Department and allies, so they could ensure that they had protective measures for their forces in Afghanistan, and to begin developing options for a response to Russia, national security adviser Robert C. O’Brien has said. O’Brien also said the CIA has asked the Justice Department to open a leak investigation into the matter.

After the initial reports in early 2019, the White House National Security Council again examined intelligence of Russian bounties in March of this year. White House officials have said it was not sufficiently substantiated to be brought to Trump’s attention. Apparently, Trump’s briefer did not bring the subject up during their meetings. Several people familiar with the matter told The Post that information is sometimes withheld from Trump, who often reacts badly to reports that he thinks might undermine what he considers his good relationship with Putin.

But the New York Times, and later others, reported that information on the Russian bounties appeared at some point in late February in the presidential daily brief (PDB), a written summary of intelligence that previous presidents are known to have read. The Post has reported that Trump “routinely skips reading the PDB and has at times shown little patience for even the oral summary he takes two or three times per week.”

Trump claimed the intelligence on the Russian bounties “never reached my desk.” But what if it did, and he just didn’t read it?

Swan, a White House reporter for Axios, pressed the question. Does the president read the daily intelligence briefing?

“I do. I read it a lot. I read a lot,” Trump said. “They like to say I don’t read. I read a lot. I comprehend extraordinarily well, probably better than anybody you’ve interviewed in a long time.”

The U.S. intelligence community has differing views on the Russian bounties, which is not unusual for the spy agencies. The Times reported on a two-and-a-half-page memo dated July 1 from the National Intelligence Council, which reports to Trump’s director of national intelligence, John Ratcliffe.

The memo said that the C.I.A. and the National Counterterrorism Center had assessed with medium confidence — meaning credibly sourced and plausible, but falling short of near certainty — that a unit of the Russian military intelligence service, known as the G.R.U., offered the bounties, according to two of the officials briefed on its contents.

But other parts of the intelligence community — including the National Security Agency, which favors electronic surveillance intelligence — said they did not have information to support that conclusion at the same level, therefore expressing lower confidence in the conclusion, according to the two officials. A third official familiar with the memo did not describe the precise confidence levels, but also said the C.I.A.’s was higher than other agencies.

The Wall Street Journal reported: “It couldn’t be learned why the NSA differed from others — including the Central Intelligence Agency — about the strength of the intelligence. The differences weren’t over the central assessment that operatives with Russia’s GRU intelligence agency paid bounties to the insurgent Taliban movement to kill Americans, some of the people said. … The NSA focuses on electronic eavesdropping, mining intercepted phone conversations, texts and emails, and other electronic signals. The CIA’s role is human intelligence, which on battlefields such as Afghanistan often means interrogation of enemy detainees.”

White House press secretary Kayleigh McEnany at a briefing in June did not deny media reports on the intelligence, but repeated the Trump administration’s view that the information had not yet been “verified.” While numerous intelligence and former government officials have said that such reports would normally have reached the highest levels of government, including the president, McEnany said Trump is briefed only “when there is a strategic decision to be made.”

Defense Department officials have said the intelligence was real but inconclusive (which is often true for battlefield intelligence). “I sent the intelligence guys back to continue to dig on it. And I believe they’re continuing to dig right now,” Gen. Frank McKenzie, commander of U.S. Central Command, said July 7.

In the interview, Trump claimed that “if you look at some of the wonderful folks from the Bush administration, some of them, not any friends of mine, were saying that it’s a fake issue; but a lot of people said it’s a fake issue.” That’s an apparent reference to former secretary of state Colin L. Powell, who told MSNBC that coverage of the reported bounties “got almost hysterical in the first few days.” Powell said “our military commanders on the ground did not think that it was as serious a problem as the newspapers were reporting and television was reporting.”

Swan noted that Army Gen. John Nicholson, then the top commander in Afghanistan in 2018, had said publicly that Russia was supplying weapons to the Taliban. He asked Trump why that fact was not enough to raise the issue with Putin.

Trump’s history is off. The United States supplied weapons to the mujahideen rebels opposed to the Soviet Union’s 1979-1989 occupation of Afghanistan. Some of the rebels later formed the Taliban in the early 1990s. The Taliban was able to seize power because the population had grown weary of corruption and infighting among the mujahideen. In 1996, the Taliban defeated the forces of President Burhanuddin Rabbani, one of the founders of the Afghan mujahideen, and seized the capital, Kabul.

Trump further dissembled in this “Axios on HBO” interview by claiming that the intelligence never reached his desk. He may not have been orally briefed, but the Russian bounties were included in the written briefing that previous presidents read daily.

Reports of Russian bounties targeting U.S. troops have spurred the Defense Department to action, triggered a leak investigation by the Justice Department and continue to be investigated by U.S. officials. By giving a total denial, as if trying to put the cat back in the bag, Trump earns Four Pinocchios.