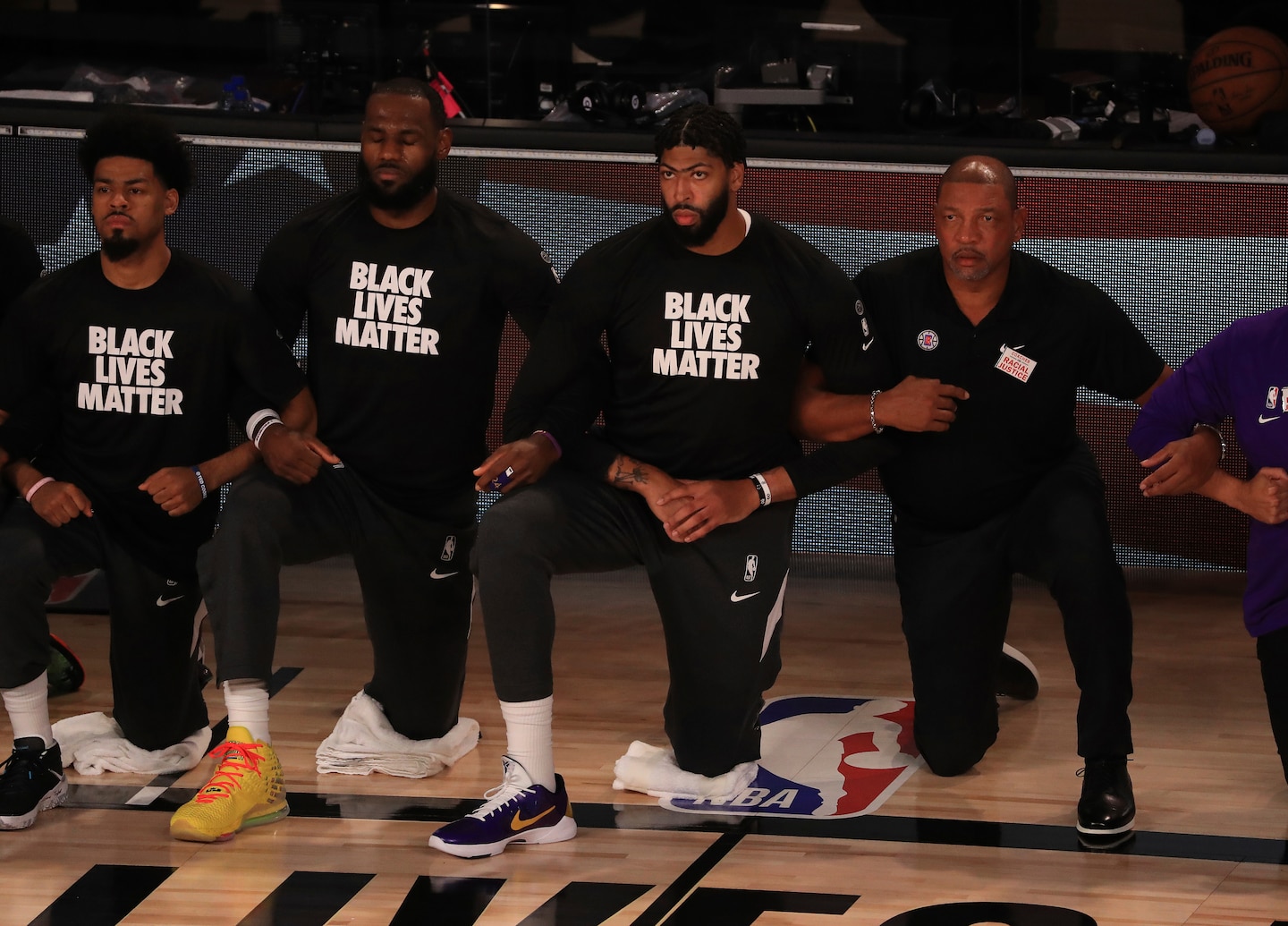 “I hope we made Kaep proud,” James said. “I hope we continue to make Kaep proud every single day. I hope I make him proud on how I live my life, not only out on the basketball floor but off the floor.”

The Lakers and Clippers donned “Black Lives Matter” shirts and locked arms before their contest in a unified demonstration. Every player on both teams participated, as did the coaches and referees. A similar demonstration took place involving members of the Utah Jazz and New Orleans Pelicans earlier Thursday.

The 35-year-old James, who has been outspoken on political issues dating back to Trayvon Martin and Eric Garner, called for the Louisville police officers who shot Breonna Taylor to be arrested last week. After recently praising Rep. John Lewis (whose funeral was held Thursday) for teaching him to “never be afraid of conflict, good conflict, positive conflict that can create change,” James said he appreciated Kaepernick’s willingness to take a polarizing stand and to clearly state his motives, even when critics suggested kneeling was disrespectful to the military or un-American.

“Kaep was someone who stood up when times weren’t comfortable, when people didn’t understand, when people refused to listen to what he was saying,” James said. “If you go back and listen to his postgame interviews when he was talking about why he was kneeling, it had absolutely nothing to do with the flag. It had absolutely nothing to do about the soldiers, the men and women that keep our land free. He explained that, and the ears were closed. People never listened. They refused to listen. I did. A lot of my people in the Black community did listen.”

NBA Commissioner Adam Silver said Thursday that he would not enforce a “long-standing rule requiring standing during the playing of our national anthem” because of “these unique circumstances.”

Before the bubble openers, NBA players had not knelt during the national anthem in the post-Kaepernick era. Back in 1996, Mahmoud Abdul-Rauf was suspended for one game for failing to stand during the anthem.

“We thank [Kaepernick] for sacrificing everything he did to put us in a position today, even years later, to have that moment that we had tonight,” James said.

Multiple players who participated in the demonstrations called them “emotional,” and National Basketball Players Association Executive Director Michele Roberts applauded the Nuggets and Pelicans. She later said in a statement that she was “very proud” of the “sober, powerfully moving” and “heartfelt” demonstration.

Even so, the NBA community seemed to be bracing for the possibility of political blow back. President Trump, a longtime critic of players who kneel during the anthem, said earlier this month that “the game is over for me” when it happens because the action amounts to “a sign of great disrespect for our Country and our Flag.”

Pelicans guard JJ Redick defended the collective kneeling from potential critics who might believe the players were politicizing the anthem.

“The majority of Americans want social justice, real equality and to end police brutality,” Redick said. “The polls back that up. Politics and sports coexist now. The league has recognized that.”

James, meanwhile, said he would offer no preemptive response to potential critics.

“There’s always going to be people who don’t agree with what you’re doing,” he said. “No matter what you do in life, you’re always going to have people try to pick apart whatever you do. If you’re passionate and true and authentic to whatever your cause is, then it doesn’t matter. I couldn’t care less about the naysayers. I’ve been hearing it for too long.”