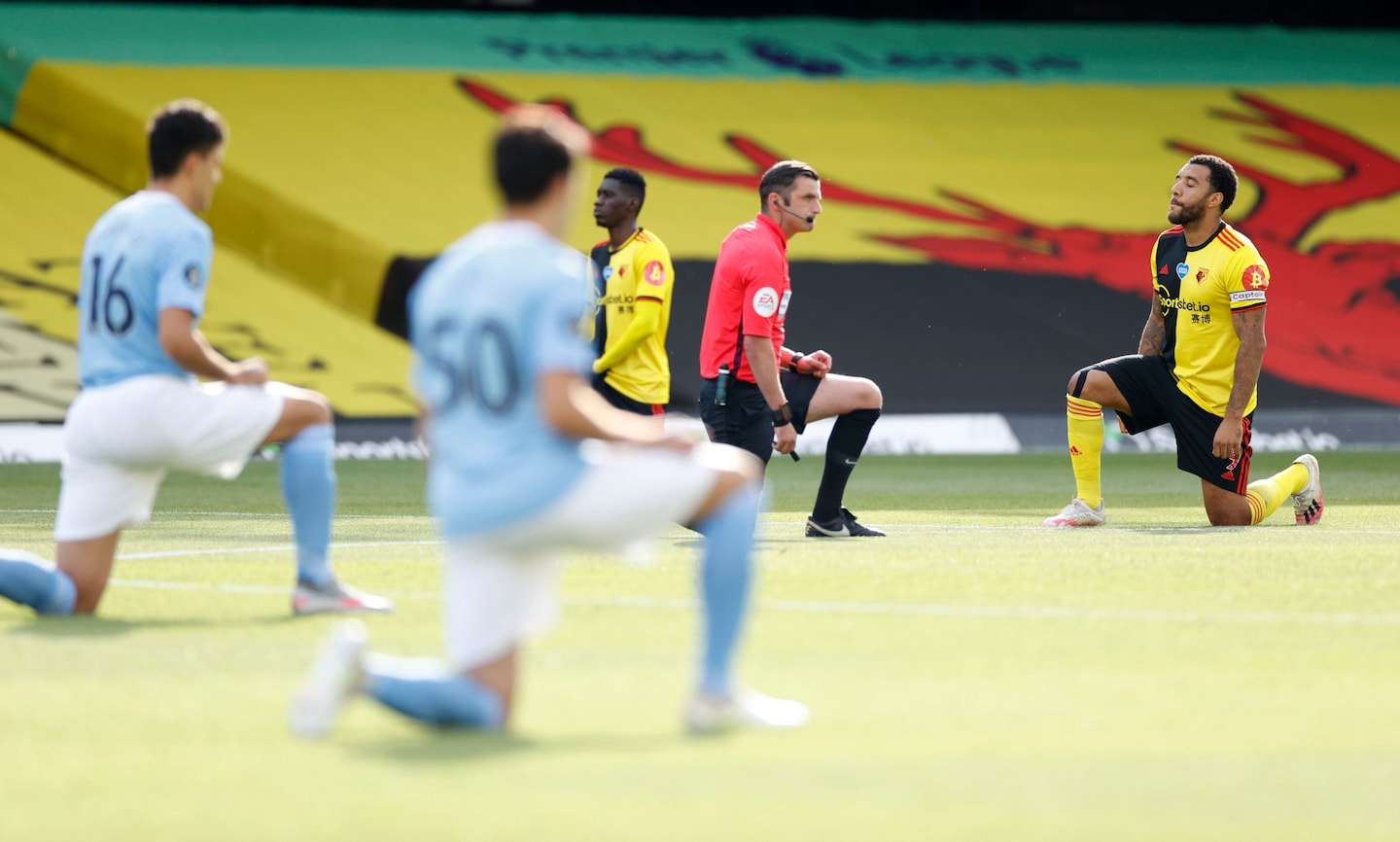 Within a week of the mid-June restart, the fuzzy feelings were punctured by a plane, flying over Manchester City’s stadium during a match against Burnley, trailing a banner reading “WHITE LIVES MATTER BURNLEY!” The move was quickly decried, but the reminder had been served: Racism has always been — and continues to be — a problem in English football.

There was no questioning the optics of the Premier League’s response to the Black Lives Matter protests. But plenty have questioned a true desire for meaningful change. Only last month was a system set up to report racial abuse they receive online. There was no movement to diversify coaching and administrative ranks in the EPL or to address racial bias in commentary.

With the season over July 26, were the patches just, well, a patch?

“Okay. That’s cute,” says Jordan Jarrett-Bryan, a reporter for Britain’s Channel 4 and a radio host for talkSPORT, of his initial response to the patches. “But when people are being murdered because they’re Black, I’m not interested in feeling good. I’m interested in actual reform.”

The racist abuse that Black players such as Laurie Cunningham and Viv Anderson notoriously suffered in the 1970s continues, in some form, to this day. Government figures showed a significant yearly increase in reported soccer-related incidents in 2018-2019. Just this month, British police arrested a 12-year-old boy who sent Crystal Palace star Wilfried Zaha racist messages on social media. Racism is largely expressed via fan abuse but not exclusively: In February, Leeds goalkeeper Kiko Casilla was suspended after racially abusing an opposing player. Similar allegations have been around for years in European soccer.

“Everything that’s being raised — everyone knew about all of this,” says Felicia Pennant, founder and editor in chief of Season, a fashion and soccer digital platform that works against the “male, pale and sometimes stale” of the mainstream. “What I would really like to know is, why is this different now?”

In an emailed statement, a spokesperson for the Premier League pointed to two ongoing initiatives launched in late June: a new “dedicated reporting system” for players, coaches and their families to report online racist abuse and a program that aims to place up to six Black, Asian and minority ethnic (BAME) coaches a year in “intensive work placement” with clubs in the three divisions below the Premier League.

At the sport’s grass roots, however, there are widespread concerns that the Premier League and its corporate and broadcast partners have shown little motivation to change their multibillion dollar business. Some fans are left feeling that, if there is a progressive streak in soccer culture, it won’t be found in the pros.

Season’s Pennant, a die-hard Chelsea supporter from South London, remembers watching bedrock soccer programming, such as England’s beloved “Match of the Day,’ and remembers often thinking the same thing: “There’s no women here, there’s no one Black here, and there’s no Black women here.” Season’s goal in part is to give “women and people that don’t feel represented elsewhere a space to truly be honest” — to say “yes we do exist and this is what we think and we love football as much as you do.”

Watching TV personalities respond with seeming sincerity to the reckoning over race relations in football left Pennant “vexed,” she says — some were people she has interacted with in chilly professional encounters, in rooms where she was the only Black person. “I mean, the hypocrisy.”

Watching a White fellow pundit ask ex-player Micah Richards to “educate” him on race relations, she thought, “the emotional labor is always put on Black people.” She points to two of the league’s biggest stars: “Raheem Sterling is always asked about racism. Ask Harry Kane.”

As part of its own response to the Black Lives Matter protests, Season posted “The Season Guide to Being Anti-Racist and Supporting the Black Community in Football” and offered a piece on “how to turn BLM solidarity into action.” For the most part, however, Season and other organizations like it are not explicitly political but inherently so. “I want to be optimistic,” she says. “You have to hope” that change can be affected “by doing what we do.”

Mundial, a magazine and creative agency, is part of the boomlet of nontraditional soccer media. (Its staff is mostly White). Last year, Mundial started a team, Sporting Club de Mundial, in the East London neighborhood of Hackney. “We looked to create a team that could be a proper representation of football in Hackney,” says Sam Diss, Mundial’s head of content. “The team is 75 percent made up of local lads, most of them BAME players.” The team competes in the Hackney & Leyton League, which itself has “a diverse board of administrators” and coaches “that reflect the make up of the area.”

Diss says that’s something that can be seen throughout London. “Local amateur leagues are seen as properly representative of their areas,” he says, “and that representation is taken as a source of pride: Players argue over which district has the best park football all the time.” That’s particularly important in an era when, Diss argues, “a lot of professional football clubs have forgotten they’re supposed to be representative of a community and not just a cluster of copyrighted images and hashtags.”

The group Nutmegs focuses on women and non-binary people of color. Its co-founder, Hayley Bennett, also believes the professional clubs have discarded certain responsibilities. Nutmegs was created because “the social side of watching football was not designed with women or non-binary people of color in mind,” Bennett says. “We realized we would need to create our own.”

That has included organizing outings for fans who had never before felt fully safe attending live games. However, Bennett points out, “We are not trying to make football more inclusive or diverse as we don’t see that as our responsibility. There are people in positions of leadership who should be doing that.”

The Black Lives Matter protests have renewed talk around an oft-discussed move: a true zero-tolerance policy against racial abuse in which one documented incident would get you a lifetime ban. As Jarrett-Bryan points out, incidents of racial abuse are not as prevalent in other popular English sports such as rugby or cricket. “You can’t tell me there aren’t racist cricket fans!” he says. “The difference is, you can’t get away with it there. But that won’t happen because there’s no diversity within the upper echelon of the Premier League. Why would you expect a bunch of White men to understand why it’s important to protect Black players? Why would you expect a fish to bark?”

Jason Lee, a former Premier League player, is now the Equalities Education Executive of the Professional Footballers Association. “Let’s look at the execs,” he says. “Let’s look at the boards. Who are the decision-makers? There are people within organizations that are ambitious, and it’s not coincidence. It’s not paranoia. They’re not getting opportunities because of the color of their skin.”

There have been intermittent pushes in England to adopt the NFL’s Rooney Rule, which stipulates that interview pools for coaching jobs must include a minority candidate. “We wanted that forever,” Lee says. “That’s never been able to get off the ground. There’s voluntary participation. Voluntary is a waste of time.” Lee wants mandatory institution of the rule, via government legislation, if that’s what’s it takes.

He connects the lack of coaching opportunities to another long-standing issue: racial bias in commentary. Denmark research firm RunRepeat recently published the results of a lengthy analysis of television commentary in English football; it quantified that lighter-skinned players are regularly praised for “intelligence” and “quality” while darker-skinned players are commonly associated with “pace” and “power.” Lee is hopeful the study will lead to more bias training. He underlines, however, that these are grievances that have long been voiced and have long fallen on deaf ears. Bringing this up without the Danish firm’s statistics, he says, probably would have seen him dismissed as “another Black man saying ‘I’m not happy.’ ”

With the 2019-2020 Premier League season over and without the pressure of protests, will English football continue an honest racial reckoning? “Is this performative?” Pennant asks. “What’s your plan in a year? Ignorance is bliss, but no one can say they’re ignorant any more. If you are silent, you’re complicit. Bottom line.”

“We’re nowhere near satisfied,” Lee says. “And if it’s uncomfortable for some people, that’s their problem. Some are asking, how long will this go on for? Mate, it’s been going on for hundreds of years.”

The 2020-2021 Premier League season kicks off Sept. 12. For now, there are no plans to continue the Black Lives Matter sleeve patches.