U.S. Women’s Amateur is postponed a day by Hurricane Isaias 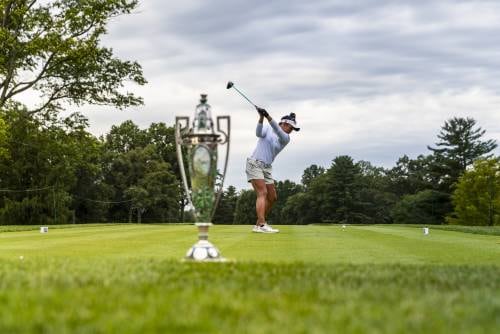 With her mother serving as her caddie, Seumanutafa — who is from Emmitsburg, Md., roughly 40 minutes from the course — posted the best score in the group, firing a 1-under-par 71 to finish three shots off the lead.

“It’s very special for me just to be home, in my own bed,” said Seumanutafa, 19, who was named the 2019 Big Ten freshman golfer of the year while helping the Buckeyes claim the conference tournament title. “It’s an honor to play at home.”

U.S. Golf Association officials announced play Tuesday has been postponed because of the expected arrival of Hurricane Isaias. Play is scheduled to resume Wednesday morning with the final round of stroke play, trimming the field to 64 for match play.

Seumanutafa spent her early childhood in Hawaii and at 14 moved with her parents to Frederick County when her father had a job opportunity in the area.

She has been practicing at Clustered Spires Golf Club in Frederick, less than 40 miles from Woodmont. Seumanutafa said the rough is similarly penal at both courses, so she has a feel for what to expect even though she had not played Woodmont until this week.

“I have a couple friends that are members here,” Seumanutafa said. “They’ve given me tips on where to hit it. I was hitting a lot of fairways today, and that’s kind of the key for this golf course.”

Olankitkunchai was making her competitive debut at Woodmont as well; she carded a 1-over 73, tied for 41st, after a bogey at the par-4 18th, where she hit her approach into a greenside bunker, landed her third shot just off the fringe and chipped within a foot.

In the 2019 spring season, the native of Thailand became the first player in Terrapins history to advance to the NCAA championships, where she finished tied for 43rd at 11 over.

This spring, Olankitkunchai led Maryland with a stroke average of 72.6 and was the only player on the team to shoot below par seven times. She had two top-11 finishes in five events before the remainder of the season was canceled because of the novel coronavirus pandemic.

“I played pretty solid,” said Olankitkunchai, who came to College Park after being recruited while playing juniors in California. “I hit great shots, but I just missed a couple of putts. Hopefully tomorrow I’ll get used to the speed of the greens and play better.”

Greenlief, who finished with a 4-over 76, likely needs to shoot under par Wednesday to qualify for the match-play portion of this week’s event. The top 64 players over the first two rounds of stroke play advance to match play, with the championship match Sunday.

Making her eighth appearance in the event, the Ashburn, Va., resident carded bogeys at Nos. 3, 9, 14 and 18 on a course she has played before, although not when it was set up for a USGA championship.

Just 20 players in the field of 132 broke par in the first round, with Rachel Kuehn and Riley Smyth tied for the lead at 4-under 68.

“The course was in good shape considering the weather the past two weeks in this region has been pretty tough for golf courses,” said Greenlief, 29. “It was fair. I thought I hit the ball [well], but I didn’t get anything out of my round. That’s a bit frustrating.”

Greenlief’s handicap, however, is several strokes lower since the three-time Washington Post All-Met honorable mention selection at Oakton High competed for the Cavaliers.

She attributes that improvement to not having to face the pressure of playing well in college tournaments simply to make the lineup the following week.

Greenlief instead relishes her time on the golf course these days, with the alternative being going on the road, at least in pre-pandemic times, in her full-time career as a retail consultant.

“I think I actually play at a higher level than I did in school,” the Fairfax native said. “It’s a different game because I have to prioritize what I do and balance working with playing golf in the evenings or practicing whenever I can. I worked on my game a lot and redid some stuff in my golf swing, but I think also I’m playing for me.”