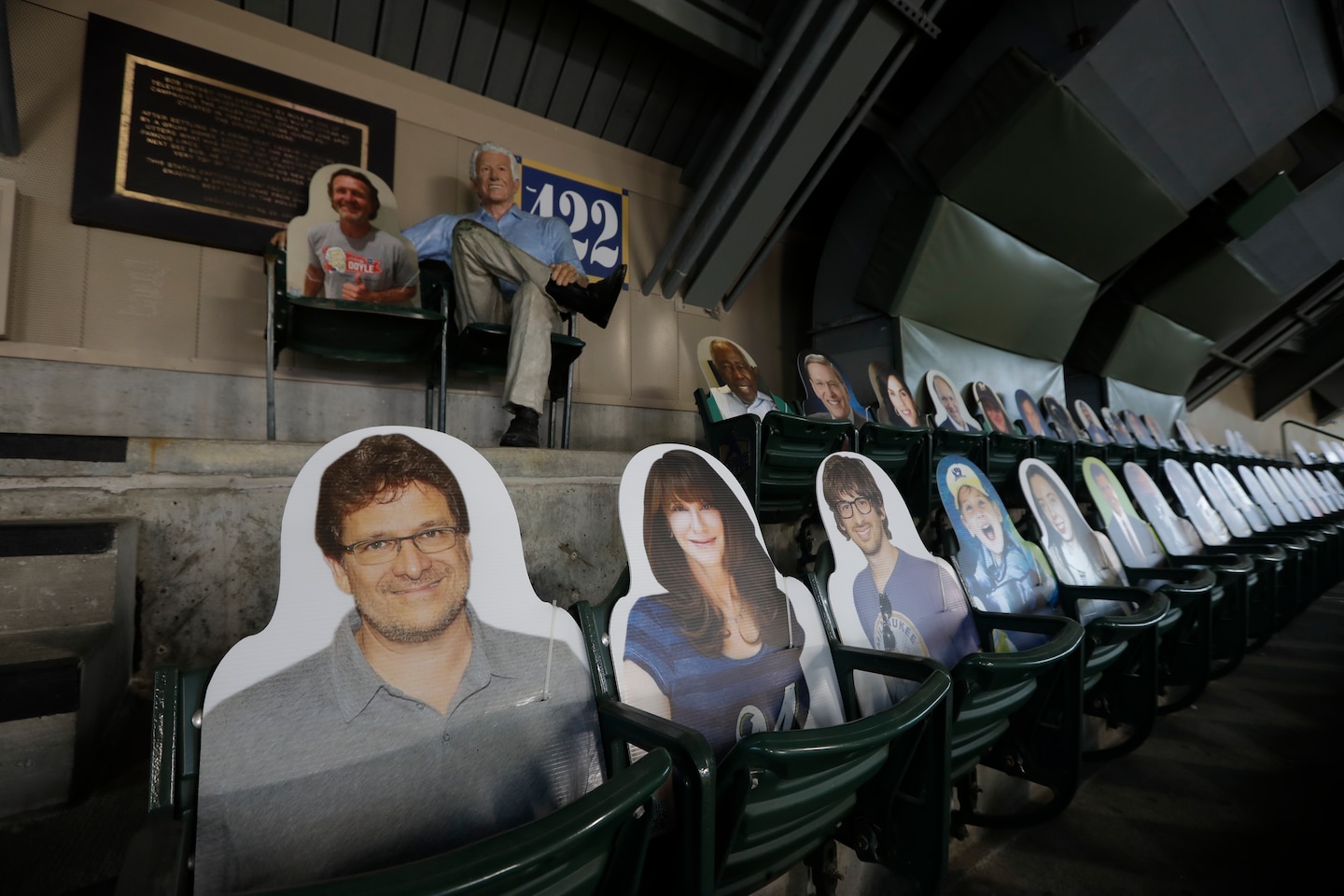 It didn’t go well. After a four-day layoff, the result of an outbreak among the St. Louis Cardinals that forced the postponement of the teams’ weekend series, the rusty Brewers — also playing for the first time without all-star center fielder Lorenzo Cain, who opted out in the wake of the Cardinals news — blew a two-run lead in the late innings and lost to the Chicago White Sox.

Total attendance, as in every game this season: zero.

In moments such as those, and in countless others across a sport teetering on the edge of crisis in its efforts to persist amid a global pandemic, it is difficult not to conclude the virus is winning, and every game played this season is simply staving off the inevitable decision to pull the plug once its assertion of dominance is complete.

“This virus is an incredible, difficult opponent,” Brewers Manager Craig Counsell said on a video conference with reporters, with a tone of resignation familiar to anyone struggling to adapt to the new reality. “It’s put us behind the 8-ball. I desperately want to play and finish the season. But it’s not going well right now. It’s not.”

Earlier Monday, Cardinals team president John Mozeliak, whose team remains shut down amid an outbreak that had grown to include seven players and six staff members testing positive, summed up baseball’s 2020 existence in one sentence: “It’s hard to think about the future,” he said on a video conference, “when you’re literally just trying to get through the day.”

The 2020 season — the latest, shortest and strangest in modern baseball history — values attributes beyond the core ones typically associated with the sport. It values resourcefulness, as players, managers and front offices alike navigate an unfamiliar landscape. It values discipline, both personal and collective, as the adherence to health and safety protocols and the avoidance of the coronavirus appears increasingly to be a competitive advantage.

But mostly what this season values is adaptability. This is baseball as improv theater, where the schedule, the personnel and even the rules can change — and are changing — on the fly.

To some extent, MLB envisioned it being this way from the beginning. Nowhere in its 113-page health and safety protocols — with its dugout seating charts, exhaustively detailed roster rules and eight bullet-pointed guidelines for “Personal Hygiene” — is any defined threshold for shutting down a team or the entire season.

The omission was not accidental. In the face of a major outbreak, or some other existential threat to the season, baseball decided its instinct would be not to retreat — but to adapt. “As comprehensive as this manual is,” the first page of the document declares, “it does not address every aspect of MLB and Club operations for the 2020 season. Additional guidance may be provided throughout the season.”

Baseball has seen two major outbreaks so far, both of which had people inside and outside the game questioning the season’s viability. The Miami Marlins saw 18 players and two coaches test positive over the course of a week; they were scheduled to resume their season following a week-long shutdown Tuesday in Baltimore. And the Cardinals, with a total of 13 positives, were hoping to be cleared to play at home Friday against the Chicago Cubs.

But since those outbreaks were separate and unrelated, and since every postponement affects not one team but two, the season standings, less than two weeks into the season, already show some alarming incongruities:

Entering Tuesday, many teams had played 10 games, a handful had played 11 — but the Marlins had only played three, none of them at home. (Their home opener is now slated for Aug. 14, 22 days after the Washington Nationals’.) The Philadelphia Phillies, the innocent bystanders in the Marlins’ outbreak, were likewise shut down for a week and played their fourth game Monday.

“It’s human nature to think, ‘Why us?’ Or, ‘Poor Phillies. Why did this happen?’ ” Phillies pitcher Jake Arrieta said. “But once you have that initial thought … it’s time to think about, ‘Okay, what do we need to do to stay as ready as we possibly can, even though it’s difficult?’ ”

Both the 60-man rosters and the regional travel scheme in place this year — with teams playing only within their division and the corresponding one from the opposite league — were designed largely with this in mind: replenishing an infected team’s personnel and changing up the schedule on the fly. The Marlins’ outbreak will require them to replace more than half of their active 30-man roster.

When it became apparent some teams would have to play as many as a half-dozen doubleheaders in the coming weeks to make up the lost games, MLB quickly created a new rule that all twin bills in 2020 would feature seven-inning games.

“We have to be fluid,” Commissioner Rob Manfred told ESPN, “but it is manageable.”

Still, navigating the crises has been a high-wire exercise in winging it. At one point last week, the New York Yankees were idling in buses in Philadelphia, where their game against the Phillies had been postponed, and were preparing to head back to New York to work out, until MLB realized the Orioles also had a sudden opening on their schedule — with their series against the Marlins postponed — and created a Yankees-Orioles series out of thin air.

“Our equipment truck was headed back to Yankee Stadium,” Yankees Manager Aaron Boone said on his weekly segment on WFAN. “When the Orioles thing started to come into the picture, we told our equipment truck to pull over and get a Slurpee … and then [a few minutes later] told them to turn around on the highway and head to Baltimore.”

One advantage of being adaptable is it provides an opportunity for improvement, which is what MLB hopes will occur in the wake of the Marlins’ and Cardinals’ outbreaks. Manfred has attempted to scare and then shame players into correcting the behaviors he believes led to the virus cases — first by informing union executive director Tony Clark the season could be canceled if there are additional outbreaks, then by telling ESPN’s Karl Ravech that “players need to be better.”

That went over about as well as you would expect with players. “We’re the ones that are putting ourselves at risk out there on the field,” San Francisco Giants pitcher Jeff Samardzija said. “It’s easy to say things like that from up top. We’re down here; we’re doing what we need to do to get these games played.”

But MLB also moved to tighten the health and safety protocols, requiring teams to designate a compliance officer to keep team personnel in line on and off the field. This came largely as a reaction to the Marlins outbreak, which CEO Derek Jeter acknowledged occurred because Marlins personnel “had a false sense of security” and “got relaxed” with social distancing guidelines while on the road.

“We’re all adults. Everyone in that clubhouse is an adult,” Brewers GM David Stearns said. “I don’t think it’s any one person’s responsibility to police the rest of group. … If we want to have one person with the title compliance officer, that’s fine. But at end of the day this is all of our responsibility, including the players.”

There is ample motivation — not the least of which is financial — for baseball to plow forward in hopes of surviving until October, when an expanded, 16-team postseason brings the promise of both proper closure and massive television revenue.

But all it takes is one look around the sport — where there hasn’t been a single day unaffected by a coronavirus-related postponement since July 27, and won’t be until Friday at the earliest — and around the United States to feel pessimistic about baseball’s chances of pulling it off.

“To this point, unfortunately, we’ve handled this [crisis] the same way our country has handled this,” Counsell said. “We put together guidelines that were well-intentioned … and then we handed them off to 30 individual operators [and] asked them to do their best. Adherence to a set of protocols and suggestions and trying to get it right has just not gone well. It just hasn’t gone well.”