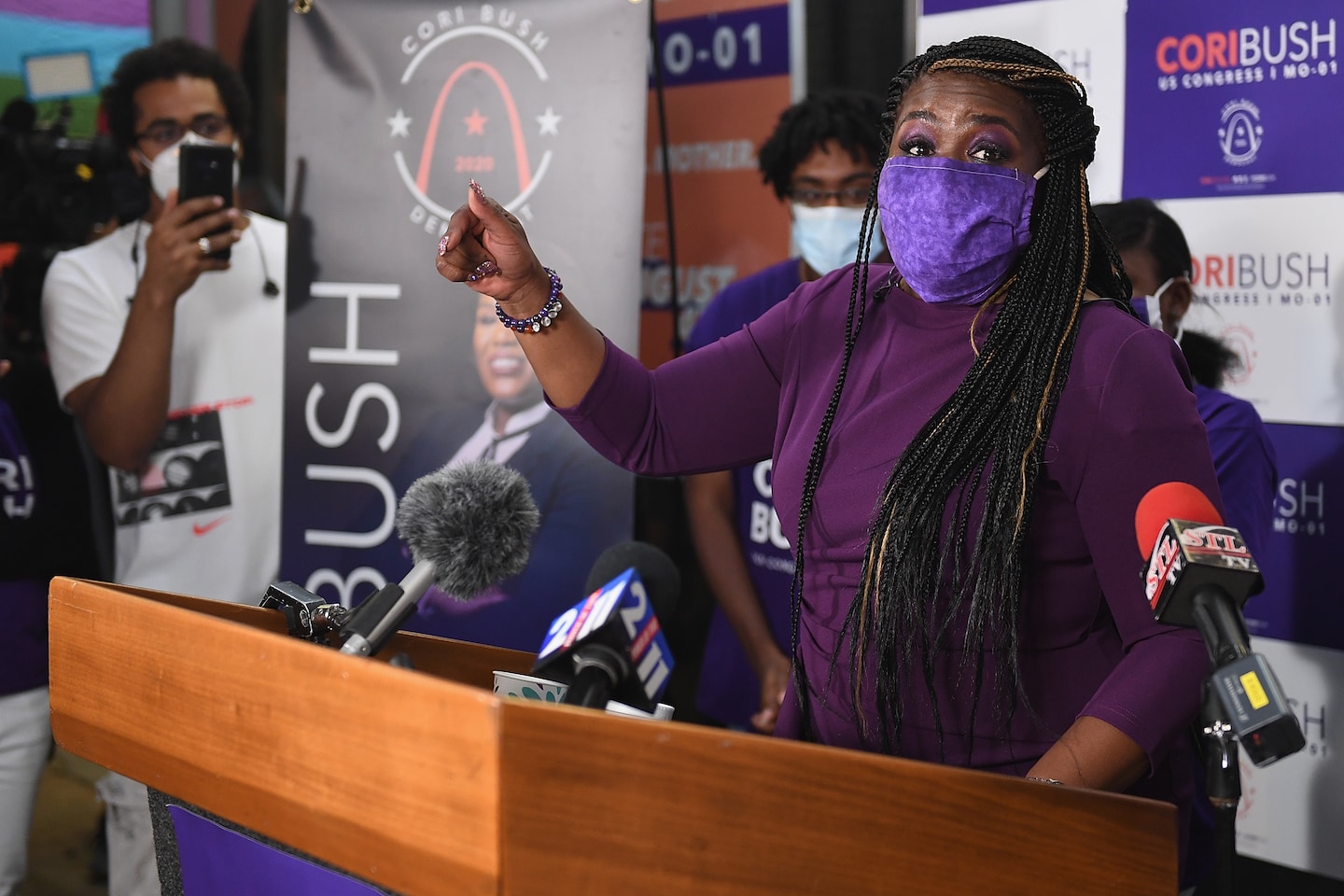 Bush is the fifth left-wing Democrat to oust an incumbent member of Congress from her party since the start of Trump’s presidency — including three this year — and her victory came as a welcome jolt for liberal activists working to challenge entrenched Democrats. A constellation of liberal organizations that helped push Bush to victory are now turning their focus on defeating other establishment figures, such as Rep. Richard E. Neal (D-Mass.), the powerful chair of the House Ways and Means Committee.

In another race in Michigan on Tuesday, Rep. Rashida Tlaib easily fended off a primary challenger for her Detroit House seat — virtually ensuring her return to Congress as a member of the self-described “Squad” of younger minority female House Democrats seeking to push the party’s policies to the left.

“They counted us out,” Bush told supporters Tuesday night at her St. Louis campaign office. “They called me — I’m just the protester, I’m just the activist with no name, no title and no real money. That’s all they said that I was. But St. Louis showed up today.”

The insurgents and establishment figures disagree over the impact of these races, some dismissing the anti-establishment wins as unique to each campaign. But both sides agree that this movement feeds off victories, boosting fundraising for a slew of relatively new liberal PACs, and that losses would have starved them of political oxygen.

Veteran Democrats see this as the natural outgrowth of a wave of protests that started the day after Trump was sworn into office.

“This is all a reaction to Donald Trump. Some took to the streets, others took to the campaign trail,” said Steve Israel, a former Democratic congressman from Long Island who remains close with his former colleagues.

Along with victories in other open-seat primaries earlier this year, liberals will have a larger presence inside the House Democratic Caucus next year. This could give them a broader platform to push the potential Biden administration and House Speaker Nancy Pelosi (D-Calif.) to embrace their more aggressive agenda on health care and climate issues.

But Pelosi’s allies noted that she has had a stronger grip on her caucus in her second stint as speaker than she did a decade ago, and she has so far not faced the problems that drove John A. Boehner (R-Ohio) out as speaker in 2015 when conservative firebrands demanded his ouster.

Bush’s victory was several years in the making, starting in April 2017 when she became the first recruit announced by Justice Democrats, an organization built by veterans of the 2016 presidential campaign of Sen. Bernie Sanders (I-Vt.). Each candidate embraced the key planks of Sanders’s platform — Medicare-for-all, criminal justice and immigration reform, as well as opposition to corporate PAC money. Each was also a serious underdog.

In the summer of 2018, Hispanic Rep. Alexandria Ocasio-Cortez (D-N.Y.) and Black Rep. Ayanna Pressley (D-Mass.) defeated a pair of White incumbents with more than 40 years combined tenure in districts that had quickly diversified.

Reps. Dan Lipinski (D-Ill.) and Eliot L. Engel (D-N.Y.) lost to insurgent primary challengers in March and July, respectively, but Bush’s win this week served as a breakthrough for a movement that previously lost badly when it challenged members of the Congressional Black Caucus.

Clay Jr.’s grandfather had served as a St. Louis alderman and his father, William “Bill” Clay, served 32 years in the same congressional seat, co-founding the CBC, before turning over the seat to his son in 2001.

“Cori Bush took down a [political] dynasty on her 2nd try,” tweeted Kayla Reed, the executive director of Action St. Louis, a group that grew out of the Ferguson protests in 2014. “She ended a 50 year stronghold. Do you understand what that means? The entire Black [political] establishment came” after her, Reed said. “And she put them in the ground.”

House Majority Leader Steny H. Hoyer (D-Md.), who has brushed aside similar primary challenges on his left, chalked up Bush’s victory to unique circumstances surrounding her own campaign.

Some establishment Democrats see similarities to the far-right tea party activists who helped sweep Republicans to the House majority in 2010 and then demanded their GOP leaders just fight harder even when all leverage was lost.

Israel pointed to the Neal primary challenge as a similar dynamic, in which his critics have said he did not do enough to force Trump to release his personal tax returns, despite taking the matter all the way to the Supreme Court.

“People said he should’ve done more. There was no more he could do,” said Israel, who served four years as Democratic Congressional Campaign Committee chair and retired at the end of 2016.

Neal is facing off against Holyoke Mayor Alex Morse on Sept. 1 in the Democratic primary, with Morse running hard to Neal’s left in another safe seat for Democrats. The liberal group Fight Corporate Monopolies, a new PAC formed after the end of the Sanders presidential campaign this year, has funded at least $300,000 in ads going after Neal for a history of financial support from corporate PACs.

Unlike those other anti-establishment victories, the western Massachusetts district is almost 90 percent White and includes some of the state’s most liberal enclaves.

Neal, who had more than $4.2 million on hand for the final two months of the race, is running heavily on his work helping draft portions of the Cares Act, the more than $2 trillion rescue package approved early in the coronavirus pandemic.

In Minnesota, which votes next week, Democratic Rep. Ilhan Omar has been outspent by Antone Melton-Meaux, an attorney who is backed by the same PAC that supported Engel and has raised millions of dollars off the congresswoman’s notoriety and criticism of the nation of Israel.

Tlaib and Omar forged their “Squad” alliance with Ocasio-Cortez and Pressley early last year. Despite some initial clashes with Pelosi, the quartet has gotten along well recently with the speaker, who endorsed Tlaib and Omar in their primaries.

A defeat for Omar, who is backed by the state’s Democratic-Farmer-Labor Party, would cut against the trend of liberal wins this year. Criminal justice reform advocates won county prosecutor races across the map on Tuesday, including in St. Louis, where Kim Gardner won a second term.

Israel said he receives requests from his former colleagues about how to handle these anti-establishment challengers.

“I tell them just keep staying local,” he said, telling the incumbents to get home to their districts and avoid national cable news. “Resist the temptation to go national, or else you’re going to be a former member of Congress.”

On paper, Bush was the sort of candidate politicly ignored by party committees. After becoming deeply involved in the 2014 protests that followed the police killing of Michael Brown in the St. Louis suburb of Ferguson, Bush made a quixotic 2016 run for U.S. Senate, raising less than $7,000 and winning just 13 percent of the vote in that year’s Democratic primary.

Clay did not engage as fully in the race as some other challenged incumbents. According to Federal Election Commission reports, he had spent less than $550,000 on the race by mid-July, holding on to hundreds of thousands of dollars despite the lack of real Republican competition in November. Bush tripled her fundraising and spending from the last cycle, beating Clay to the airwaves with an ad that asked why she was in the streets fighting for racial justice and he wasn’t.

Sanders himself endorsed Bush, who traveled the country as a surrogate for his 2020 campaign, and used his own social media platform to host a rally for her. Sanders also tapped his donor list, raising $107,000 for Bush.

At a Wednesday news conference, Bush said her priorities included a year-long, retroactive, $2,000 payment to all Americans “for covid-19 relief” and a reallocation of money being spent on private prisons toward public schools.

“It’s really a story of starting all the way from the bottom and coming out on top,” said Waleed Shahid, a spokesman for Justice Democrats. “First, Black Lives Matter is just way more popular than when it started. Secondly, we’ve been working to create an ecosystem of support for all of our candidates, including paid media to get the message out about the race.”