For NBA refs in the bubble, pickleball is an obsession, and its ringleader is a ‘wild child’ 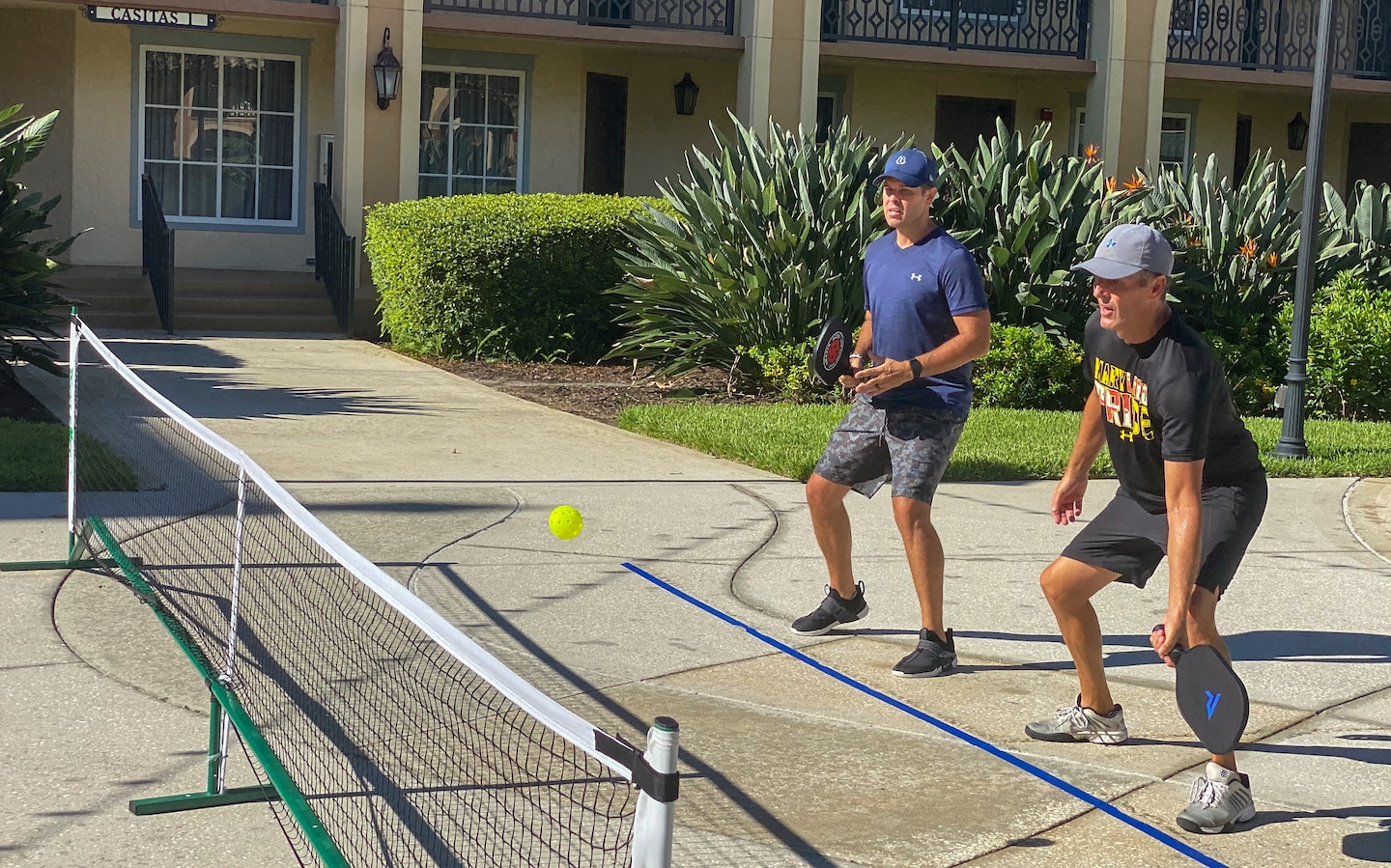 Foster has worked the NBA Finals numerous times — his profession’s top honor — and was tabbed for the high-profile showdown between the Los Angeles Lakers and Clippers on opening night of the NBA’s restart last month. On his first work night in four months, Foster found himself sandwiched between LeBron James and Doc Rivers as they shouted about an out-of-bounds call. He maintained his default setting of stiff annoyance throughout.

Referees are among the employees most essential to NBA’s nine-figure plan to restart its season during the novel coronavirus pandemic. Like everyone inside the league’s restricted bubble at Disney World, they must be tested daily and live away from their families for up to three months. They work in empty gyms where they can hear every complaint more easily, and live in a confined space within a short walk from the players’ hotel. These trying new circumstances have interrupted well-honed routines and pushed all bubble inhabitants to seek a sense of normalcy.

For Foster, that has meant obsessively playing pickleball, an outdoor paddle sport that is a hybrid between tennis and ping-pong. During marathon games that he has organized for his fellow referees, Foster is a competitive menace and a borderline tyrant, talking trash to opponents, lecturing his partners, and expressing disgust at his rare miscues under his breath. It’s not lost on Foster that his work self, the no-nonsense referee, would have little patience with his alter ego.

“If I were a referee watching myself play, I’d think, ‘What a crazy guy,’ ” he mused to The Washington Post this week. “I would probably throw myself out of the game.”

Yet Foster offered no apologies. After weeks of coaching up his colleagues and overseeing two-on-two games as the self-appointed pickleball “commissioner,” Foster formulated and distributed a rankings list of his fellow referees based on their playing ability. There was no debate about the top slot.

“There’s me and then there’s everyone else,” Foster said. “Is that cocky enough for you?”

Adapting to the bubble

When the NBA constructed its bubble, protecting and catering to the players was the top priority. The referees weren’t an afterthought: the games can’t be held without them, and they can’t work remotely.

NBA vice president of referee development Monty McCutchen, a former official himself, knew that bubble life wouldn’t be easy. To create a safe playing environment, referees would be isolated from their families for up to three months, work in empty gyms where they could hear every complaint more easily, and live within a short walk from the players’ hotel. Despite the challenges, McCutchen said he had no problem enlisting 45 referees for the restart, which runs through mid-October.

Workplace adjustments were numerous. Referees were instructed to limit their handshakes with players on the court, and they were given new whistles with protective covers that captured their spittle. Tyler Ford, a 35-year-old referee and one of Foster’s pickleball converts, heard one of his colleagues break up two arguing players by asking for “a little social distancing, please.”

Through the first two weeks of play, multiple referees said that they felt safe from the virus and that the mechanics of their job haven’t changed much. They hear players yelling from the bench more easily, they miss the buzz from the crowd, and they must communicate with a scorer’s table that is protected behind Plexiglas. Otherwise, life is fairly normal. They haven’t yet been targeted on campus with serious critiques from players or coaches.

“Robert Frost said good fences make good neighbors,” McCutchen said. “We have players-only areas and the referees have their area. If there’s any spilling over, the referees know to remove themselves to ensure the fairness and integrity is intact after the event. You can only do that through silence, taking the high road and letting things go.”

Aside from family separation, the biggest lifestyle change has been the lack of travel. Veteran referees work 90 games and take more than 100 flights during a typical season. The single-site location has compromised Foster’s Marriott Bonvoy status — “Not one point on this deal in the bubble,” he lamented — but it has opened dozens of hours usually lost in transit.

NBA rules limit how often a referee can work, and Foster estimated that he would officiate just 20 games during his 90-day stay at Disney World. Even though each game requires roughly 10 hours for planning, officiating and reviewing video, that’s a lot of unstructured time that could impact performance.

“We always hear about the negative stuff,” Ford said. “You’re not getting too many pats on the back about how great you did last night. [The feedback is] about the one or two things you could have done differently that people complain about. You have to create balance in your life.”

The referees have developed a long list of activities to fill time, including billiards, dominoes, ping-pong, H-O-R-S-E, fishing, and spikeball. The union splurged for two Peloton bikes. A group plays golf every Tuesday, and a net for pool volleyball is on the way.

But pickleball has been the go-to activity for referees thanks to Foster’s evangelism. When he arrived last month, Foster set up a makeshift court in a courtyard near the media dining hall. After initially chalking the lines, he turned to duct tape to combat Florida’s thunderstorms. There wasn’t much he could do about the concrete cracks that cause unpredictable bounces or the hanging lights that interfere with high-arcing shots.

The fast-moving sport is played with hard paddles and a Wiffle ball on a 20-by-44-foot court. Games go to 11 points and only the serving team can score. Play starts at 9 a.m. to avoid sweltering afternoons. Still, Ford said that he has burned 1,500 calories in a three-hour session with morning temperatures reaching 90 degrees.

Professionals might bat the ball back and forth 90 times on a single point, but the bubble amateurs usually top out around 15 or 20. Many points are scored with slamming shots like ping-pong, and both quickness and hand-eye coordination are key attributes. However, Foster argued that “patience” is the most important skill.

“You have to wait for your opponent to screw up and then bash him in the face,” he said.

The University of Maryland graduate discovered pickleball on the Ocean City beach a few years ago, and before long he was seeking out pickup games as he crisscrossed the country for his day job. With the help of an app, Foster located fellow enthusiasts everywhere from Hermosa Beach (Calif.) to Orlando. He started packing special shoes, balls and four paddles — just in case he could convince his fellow referees to tag along. He even altered his travel schedule, taking the first flight out so he could spend all day playing.

Pickleball players are ranked from 2.0 (beginner) to 3.5 (intermediate) to 6.0 (professional). Foster said that he was a 4.0 (advanced) but some of his friends and opponents argue that he’s closer to a 4.5. During his first nine days of bubble play, Foster said he won his first 150 games and compiled a 197-3 record. Asked if he modeled his game after any tennis greats, he looked aghast.

“It’s not like I idolize John McEnroe,” Foster said, noting that he has devoured books and watched countless YouTube highlight reels to hone his drop shots and team movement strategies. “My heroes are pickleball players.”

When working NBA games, the stoic Foster often looks like a fifth head on Mount Rushmore. When it comes to pickleball, he’s more like a motormouth Tasmanian devil. During Thursday’s session, he stewed over a blown lead and repeatedly offered suggestions to a partner who said little in response.

“If I’m teaching someone how to play, it’s friendly Scott,” Foster explained. “As soon as it becomes time to win or if someone is talking trash, [that’s over]. When my partner screws up, I’m rolling my eyes and spinning around like, ‘What the hell is going on?’ I’ve studied the game enough. When they make an elementary [mistake], I just go, ‘Oh my God.’ I’m not the greatest person to be around. I let the wild child come out.”

The new disciples are grateful that pickleball uses an “on your honor” officiating system so that Foster can’t be both prosecutor and judge. They’ve worked hard to improve their games and learned to stack the teams to make their mentor’s life more difficult. Taking a page from NBA players, the referees have also tried to get under Foster’s skin.

“When you’re playing against Scott and his partner makes mistakes, then you poke the bear a little bit,” Ford said. “Try to make some team chemistry issues on the other side of the net. I’m super competitive but Scott is on a whole different level. This is his game. When you beat him, you have to let him hear about it.”