In the Sierra Nevada, an escape to the past 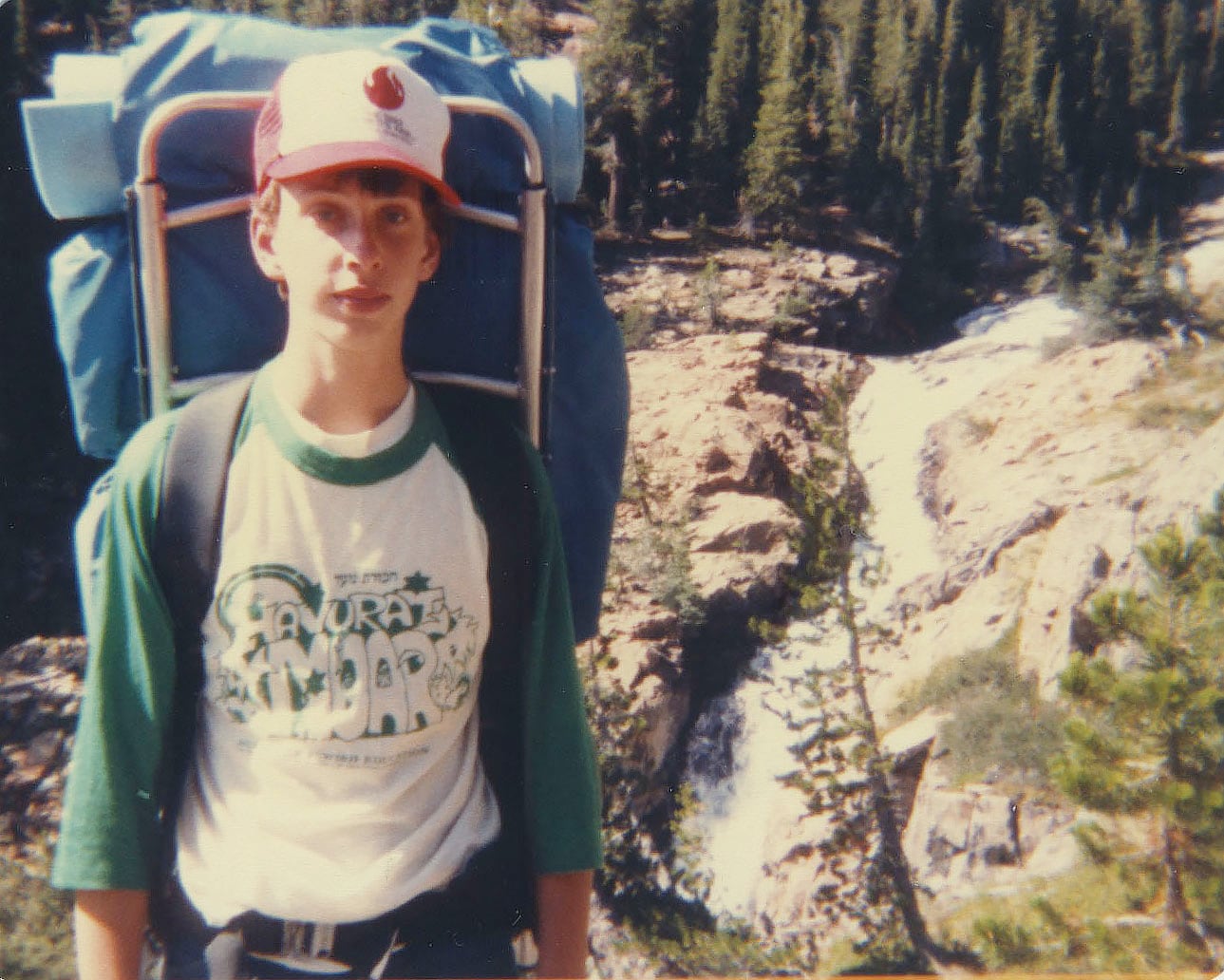 But when my wife and daughter asked if we could take a vacation to Mammoth Lakes this July, as a break from sheltering at home in Santa Cruz, I refused.

Since I have asthma, I’ve mostly secluded myself during the pandemic. Besides, I’ve avoided Mammoth since 2016, when my father died. I didn’t want to risk nostalgia or virus exposure. Then my daughter Julianna, 11, started texting me photos of Chocolate Frosted Flakes and Cocoa Krispies.

I understood the reference. Julianna longed for the freedom I’d told her I had at Mammoth, where my parents let me binge on any sickening-sweet ’80s cereals I chose. I could also stay up late and float in the hot tub all day.

Julianna deserved a reprieve. My family prevailed. We agreed to stick to the woods and wide open spaces, avoiding restaurants, steering clear of public restrooms and keeping away from crowds as much as possible. And we arranged to stay at a condo unit that had been left vacant for a minimum of 24 hours before our arrival.

As we rolled into Mammoth Lakes, Belding’s ground squirrels ran across the asphalt with their tails held high. Nostalgia set in when I saw the jagged wall of Mammoth Crest, and the Minaret peaks, which look like a pointier and more fragile version of Antoni Gaudí’s Sagrada Familia basilica in Barcelona.

There were gaudy newer elements, including the Village at Mammoth, an upscale complex near the ski slopes, but the town’s layout hadn’t changed. Gift shops still sold scratchy souvenir T-shirts with smiling mammoths on skis.

It was easy to believe no time had passed. Our Snowcreek Resort condo rental evoked childhood trips, from the dinged-up board games to the framed bathroom poster of a skier plunging spread-eagle from a frosted cliff.

The resort launched contactless check-in as lockdown was lifted. My wife was emailed the key code to the condo before our arrival.

We’d brought disinfectant and planned to wipe down all the surfaces, but it didn’t seem necessary. Cleaners had already disinfected all “high touch” surfaces, including the entry keypad, doorknobs and bathroom fixtures. All towels and bedding had been washed and placed in a hermetically sealed bag.

In some ways, the virus threat contributed to the time warp. Because of coronavirus concerns, the usual shuttle down Reds Meadow Valley Road, which runs close to the middle fork of the San Joaquin River, wasn’t operating. The rangers let me drive my car down that narrow strip of asphalt, just as my father used to do in the early ’70s. When we stopped by Sotcher Lake near the road, Julianna learned to skim stones and ducked to avoid dragonflies, just as I’ve done on the same shoreline.

A grocery trip brought me back to reality. The town was overrun despite the virus threat.

Mammoth’s main visitors’ website has a clear message to tourists: “Mammoth Is Open,’’ as long as visitors take precautions including masks and social distancing. But now I was part of a growing horde.

Tourists thronged the sidewalks and lined up 50 deep for outdoor dining. Most wore masks, but “social distancing” was sometimes a matter of millimeters instead of feet. Later, I would read news reports that Mono County — which includes Mammoth Lakes — had been placed on the California coronavirus watch list because of a surge in cases. According to a Los Angeles Times report, the surge was tied mostly to Mammoth Lakes restaurants.

Some waterfronts were also jam-packed. When I tried to revive an old tradition of taking a pedal boat out on Lake Mary, we had to swerve to avoid armies of paddle boarders, pontoon boat operators and annoyed fishermen.

On most visits to Mammoth, I felt unfulfilled unless we checked off a list of “must-dos” — drink a sunset beer at a bar with a viewing deck, eat pastries at Shea Schat’s Bakery, go out for a fancy meal on the last night. I tore up the list. It was time for the backwoods.

On the second day, after packing turkey sandwiches, we hiked toward Sky Meadows. Ponderosa pine trees smelled like raw cookie dough. We saw a few backpackers, but few people were out exploring the fields of corn lilies.

When we reached Emerald Lake, my daughter scrambled up unstable-looking boulders and returned 10 minutes later. “Come with me,” she said. I heaved up the slope, my fitness tracker flashing 143 heartbeats per minute. I had to catch my breath. Julianna waited by the drop, the lake far below us.

“Look,’’ she said, pointing to the plates, ridges and fans of a mountain, with forests and rockfall along the massive base. I didn’t think Mammoth held surprises for me, but that vantage point was a shock. It was as if I’d entered a landscape I’d never seen.

At the end of the trail, Sky Meadows was deserted. Across the creek, the sheer and ominous form of Blue Crag rose above patches of ice, snow and scree. My parents did this steep trail late into their 70s. I used to race ahead, stacking cairns at tricky intersections so they would not get lost. Now my daughter was watching out for me.

On the way down the slope to the trailhead, she handed me a branch. “Use it as a walking stick,’’ she said. Her offer made me feel grateful and proud, but also elderly and enfeebled.

On the last day, we wanted an easy hike to TJ Lake. Muddle-headed, I went to the wrong parking lot. We wound up on the steep trail to Crystal Lake, which I’d never seen. The wind kicked up, and the altitude got to my wife. “This is the wrong path to the wrong lake,” Amy complained.

I expected Julianna to be annoyed, too. She dislikes changes of plans. But she’s becoming rougher lately, scrambling up trees, dunking into creeks, leaping off rocks, and getting stung by bees and wasps without crying. She raced up switchbacks over exposed roots. “It will be worth it,’’ she said.

The slope dropped us into a rocky bowl containing Crystal Lake. It was strange to come across a Mammoth landmark that was not a storehouse of old memories. A young boy stood on a rock island, casting his line. The virus has winnowed our options and limited our movements, but somehow we’d found a way to surprise ourselves in a familiar place I thought I’d never go again.

Later, we were on a narrow meadow in front of the Snowcreek condo village, watching mountains turn pink and orange, when someone called our names. We turned to see Justin and Marissa, whose son is in our daughter’s class. After getting over the shock of this random encounter, we chatted.

Turns out Marissa’s parents have been visiting Mammoth since 1963. She’s been going as long as she can remember, watching fireworks at Crowley Lake outside Mammoth on the Fourth of July (canceled this year because of the pandemic) and taking countless hikes.

“One summer, two sisters who lived in town scattered their leftover Halloween candy throughout the woods that used to be in the center of town and christened it Candyland,’’’ she recalled. “All the kids in town hunted down candy all that summer.”

In July, they were sustaining their Mammoth traditions with their two sons. But this year felt different, Justin told me. He felt sheepish about being part of the crowd at a jam-packed grocery store. “I’d be lying if I said I didn’t feel guilty and a little bit selfish for coming this year.”

His concerns reflect one of the realities of life in California during a pandemic. Try to “get away from it all” as safely and respectfully as you can, but when travel is limited and options are few, you may find crowds wherever you roam.

Still, I was grateful for the trip’s quieter moments. At Mammoth, you normally can’t pause near a meadow for long because of biting insects. This time, a bat hunted and scooped up the mosquitoes.

The bat kept flapping as the dark closed in. We walked back to the condo, making our way without a flashlight. Listening to the disembodied voices, I could almost convince myself it was my parents, my brothers and my sister beside me, taking one last stroll around the neighborhood before turning in and getting ready for the long trip home.