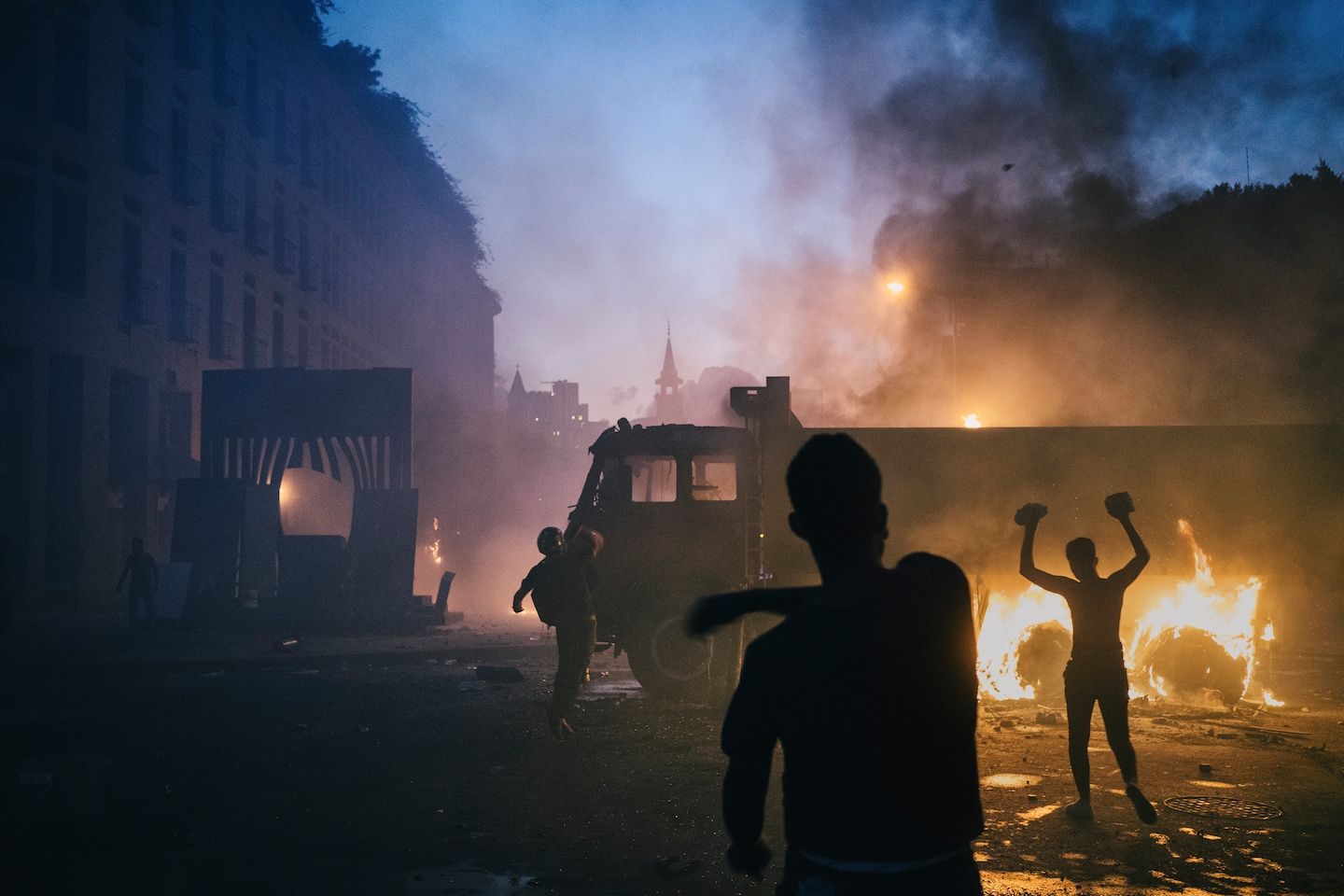 But the protesters said they don’t want their politicians to agree on early elections under a decades-old system they blame for the dysfunction that allowed a vast stockpile of explosive material to sit unattended at their port for more than six years, only to explode on Tuesday with such power that it was felt more than 120 miles away in Cyprus.

The cry from the streets is for the politicians to stand down and open the way for a new order in Lebanon.

“Resign or Hang,” said the banners advertising the demonstration, making it clear that the demand is for the politicians to go, not to agree.

“People refuse to live under their rule anymore,” said Hussein El Achi of the Min Tishreen activist group, one of the protest’s organizers.

This demonstration was different from the ones that erupted in October, full of hope that popular pressure could bring about reforms to the country’s sclerotic and sectarian system of governance, he said.

“At first we were asking them. We had demands. But today we’re not asking anymore; we are acting, we are taking back what is ours.”

The mood on the streets was overwhelmingly dark and desperate after Tuesday’s tragedy — which left at least 158 people dead.

The anger has been directed at the full spectrum of Lebanon’s political factions, including the powerful Shiite militia Hezbollah, which is widely believed to wield control over the port where 2,750 metric tons of highly explosive ammonium nitrate sat unsecured.

Demonstrators paraded gallows and nooses around the central Martyrs’ Square and strung up effigies of the country’s leading politicians, including Hezbollah leader Hasan Nasrallah.

In a speech Friday, Nasrallah warned not to hold the Shiite militia responsible for the blast, saying it could “start a battle” that Hezbollah would win.

“We want all of them to resign, from Hezbollah to the rest, from the lowest to the highest,” said a 25-year-old protester who works for an aid agency. She didn’t want to be named, citing the fear of retribution from the authorities.

“We hate our politicians. Every single one of them.”

The Foreign Ministry, which had been abandoned after being badly damaged by Tuesday’s blast, was occupied by demonstrators Saturday. They hung banners of the clenched fist — the symbol of the protest movement — on its facade. The building housing the Economy and Environment ministries was also overrun.

Tensions erupted as soon as protesters began to gather in central Martyrs’ Square. Soldiers and police forces opened fire with tear gas as protesters threw rocks, adding to the bloodshed in a city that has already bled so much.

Hospitals that had been swamped earlier in the week by the thousands of injuries inflicted by the blast were overrun again, with demonstrators injured by rubber bullets or tear gas canisters. An elderly, gray-haired man was carried through the crowds, bleeding from his eye where he had apparently been shot by a rubber bullet, and loaded onto one of the dozens of ambulances standing by.

The Red Cross said at least 65 people were taken to hospitals and more than 188 were treated at the scene. Lebanon’s Internal Security Forces said that one of its officers died in an incident at the luxury Le Gray hotel, which was set on fire. Police were investigating the cause of the death.

As midnight approached, the security forced appeared to gain the upper hand. They drove most of the protesters out of Martyrs’ Square and also out of the Foreign Ministry, chasing and beating those throwing rocks.

Earlier in the day, relatives of the dead spoke to the protest crowds. “Have you seen my son?” the mother of 23-year-old Joe Akiki, an electrician at the port who died in the blast, screamed into a microphone in front of the gathered crowd. “He has beautiful hazel eyes. Where are you, my son? You buried our sons.”

Those gathered held up pictures of the victims of the blast, in which about 6,000 people were injured. Some 21 people are still missing, according to the Health Ministry.

“Murdered, not martyred,” read one sign held by a demonstrator. “Leave, you garbage,” said another.

Some demonstrators said protesting the explosion was their last hope at bringing change. If this could not jolt Lebanon out of its political paralysis, what could?

“We lost everything, so hope is all we have left,” said Wafa Ammar, 42, who had come with her teenage son and daughter. If there is still no change, she said, “I will leave the country. I don’t want my children growing up here.”

The Lebanese pound has lost at least two-thirds of its value since last fall, slashing the value of people’s salaries as prices have risen.

Sitting among protesters in an unfinished cinema downtown known as The Egg, 56-year-old Wafaa ticked off her grievances against the political class: “They stole from us, they looted us, they made us go hungry, they made us poor,” she said, declining to give her last name for privacy reasons.

“We were going to die in our own house,” she said, referring to the explosion.

“We were already dying slowly,” chipped in her 15-year-old son Tarek.

Shadi Alame, 29, was buying a face mask printed with the Lebanese flag on the main drag of Gemmayzeh before heading to demonstrations. He said the whole system was to blame, “from top to bottom.”

“It’s all the politicians, from the president to Nasrallah to Berri,” he said, referring to the Hezbollah leader and to Nabih Berri, the speaker of the parliament and head of the Amal movement. “They are stealing everyone’s money, stealing people’s rights.”

The city continued to bury its dead on Saturday, and the death toll climbed as rescuers continued to pick through the rubble and others succumbed to injuries.

Adding to the grief and frustration are myriad unanswered questions over what caused the blast. It is still unclear what caused an initial explosion and fire before another that produced the massive mushroom cloud above the city, or why so much ammonium nitrate was sitting at the port at all.

Saturday’s confrontation came on the eve of a virtual conference Sunday to be attended by world leaders, including President Trump, intended to raise donations to help families stricken by the blast.

But Lebanese don’t want world powers to give money to their government, said Jad Chaaban, an assistant economics professor at the American University of Beirut who joined in the protests.

“Don’t give this political criminal class the financial means to continue ruling over us,” he said. “Not a single dollar, not a single penny for any government institution. These thugs in power don’t represent us.”

Nader Durgham in Beirut and Suzan Haidamous in Washington contributed to this report.