After losing a coach to coronavirus, Texas football team braces for a season of unknowns 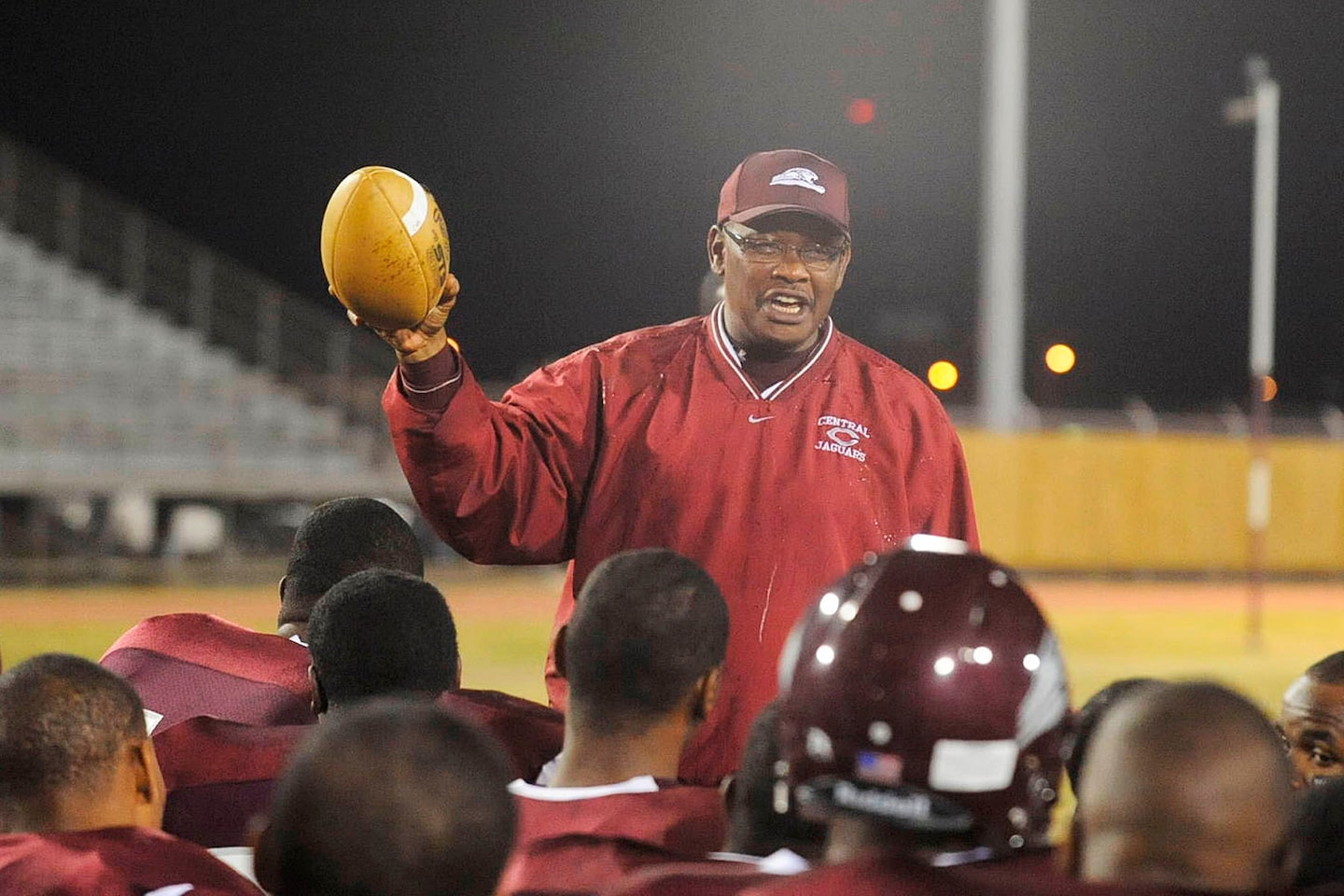 One by one, they entered the parlor and approached the casket of Andrew Washington. There was a football helmet and uniform on display, and once the boys had finished the viewing, Jason Smith slowly followed in his suit and tie.

At 36, he was the team’s head coach, even though he was the one constantly learning from Washington, his 65-year-old assistant. When Washington passed away on July 20 after a weeks-long battle with the coronavirus, Smith thought of the last words he had muttered to his mentor earlier in the summer, and he repeated them at the casket.

“I love you,” he said under his mask, and a week later, he was on the practice field for the first time in months, seeing the memory of Washington wherever he looked and, more than ever, wondering how this season was going to work.

“We’re just getting into it,” he said, “and I don’t know where it’s going to go, and I don’t think anybody does.”

Washington’s death has not only left a void in Beaumont, a refinery town on the Neches River about 85 miles east of Houston, but also a grim reminder of what coaches and players are up against as they try to play football this fall. High school football in Texas has long been considered a religion, and this southeastern corner of the state is as devoted as the rest. In the early 1970s, a Beaumont city official proclaimed the town the “pro football capital of the world,” an ode to the number of NFL players it had churned out through talent-rich local high schools.

But the cherished tradition is being threatened like never before. More than 490,000 coronavirus cases and 8,400 deaths have been reported in Texas, where scores of high school football teams have been touched by infections. A dozen schools in southeastern Texas alone have reported positive cases of a student or staff member this summer, and Beaumont’s public school district was forced to shut down workouts this month after reporting two players from different schools had tested positive in consecutive days.

At Kelly, Smith and his coaches have proceeded with caution and an exhaustive attention to their players’ safety, but Washington’s death has hit home and left some conflicted on how to play their beloved sport — which experts say is among the most dangerous to participate in during a pandemic — safely.

“Football is big down here in Texas, not that it’s everything,” said Kasey Nonette, a lifelong Beaumont native who played for Washington in high school during the 1990s and was a volunteer assistant with him at Kelly. “It’s been here forever. It will always be around. But until we can get a handle on the situation, and figure out how to keep everyone safe and know more about it, how to treat this thing or get a vaccine … it can definitely wait. Football can definitely wait.”

In Texas, smaller schools have been permitted to begin football practices on time, while the two biggest school classifications have been delayed until September — similar to the Texas Association of Private and Parochial Schools, which governs Kelly. But even with the slight postponement, administrators and coaches have been left scrambling to put together complex safety plans.

“To me, this group that [Washington] has been with for the past three or four years, he wants them to go out there and ball out,” said Matthew Haynie, a senior safety. “But there’s things that we are going to have to do … we knew before. It just seems more real now.”

For generations of players in the city, Washington was considered a father figure who was as well-known for his kindness as he was for his football prowess. Nonette knew him as a mentor whose players always sought his advice, even after their playing days were done. Haynie knew him as a humble coach who would be willing to teach you technique on the field and then do your laundry in the locker room afterward.

That’s what made him such a celebrated fixture in Beaumont’s football scene, first as a standout defensive back at local Lamar University in the early 1970s and later as a longtime assistant and head coach at a public high school. Even after he retired, when he was spotted around town at a grocery store or restaurant, locals would usually greet him by yelling “Hey Coach!”

“He loved football, and he loved those kids,” Smith said.

One of Washington’s proudest coaching moments came in January, when he joined Smith and coached in an all-star game in San Antonio. One night, after the players had gone to see a movie, Washington and Smith walked along the River Walk, talking about life and football before sitting down at a Mexican restaurant.

“It’s just unreal how fast things can change. Six months ago, he’s perfectly healthy. We’re having a great time,” Smith said. “And then six months later, here we are, and he dies of something that I have never even heard of, that’s affected the whole world.”

As the pandemic set in, Washington still planned to help coach this season, but everything changed in June. Smith spoke with Washington the first morning he had spent in a hospital after contracting the virus, and Smith could tell over the phone that Washington was having trouble breathing. But he talked or texted with Washington every day, and kept in touch with Washington’s wife, Cynthia, and was confident Washington would make a full recovery.

Smith found out about Washington’s death in a flurry of texts, and most of his team already knew through posts on social media. The memorial service was held a day after the viewing, and locals stood in the rain for the burial. One of Washington’s closest childhood friends, Winfred Wright, reminded everyone of Washington’s go-to motto: “Hard work pays off.”

‘It could be taken from you’

Kelly’s football team plans to honor Washington in each endeavor this upcoming season — “How we treat people, how we condition, how we play, everything,” Smith said — and everything now includes trying to avoid the virus. Players who attended the team’s first informal workout in August had to pass a temperature check to get onto the field. They brought their own water bottles to ward off the oppressive Texas heat, and if they weren’t on the field playing, they distanced from one another and wore a mask.

Smith himself is just trying to do the job the best he can in the current circumstances, he said, which includes limiting his own exposure. He’s known three other people who have died after contracting the virus, which can cause the disease covid-19.

“I know we take every precaution,” he said. “I’m going to do everything possible to do my part. Through this whole thing, I haven’t gone anywhere. I don’t hang around anybody. I haven’t hugged my Mom in six months.”

Most parents in town support having a high school football season, said David Ray Sr., a local high school referee whose son, David Jr., played under Washington at Kelly before graduating last year. But Ray Sr.’s family had 15 members contract the virus this summer after a nephew was infected during a basketball tournament, he said, and for all the benefits he knows football can teach kids — he credited Washington with instilling discipline and toughness in his son — Ray Sr. would oppose his own son playing football this fall. If the season had started in early August, he said he would not officiate high school games, either.

“All the kids want to play,” he said. “As much as I love it, I’m just on the other side, man. We need to look at what happened to Coach Washington and understand that the kids might be okay, but there are some older people that might not be okay. I’m just hoping and praying that it doesn’t take something happening to one of those kids for everybody to wake up on it.”

The complexities of conducting a season continue to be illustrated on high school fields across the state, from whether to open locker rooms to how they will handle a potential positive test to how they will travel. For every solution Smith’s staff comes up with, there are always more problems to deal with.

But Smith has found comfort in coming up with ways to honor Washington. The team, nicknamed the Bulldogs, wears a “Dawgs” script across the helmet; they will enlarge the AW letters for Washington’s initials. And as the team worked out last week, some of the coaches yelled: “Hard Work!” The players responded: “Pays off!” to finish Washington’s motto.

When Smith brought his players together, just a week after visiting the funeral home, he reminded them of what was at stake.

“If there’s anything we’re learning from all of this, Coach Washington, not to think any of this is all right. Everything that we get to do, day in and day out, is a privilege,” Smith said he told the team. “And we have to appreciate each other in these moments, because we just don’t know. It could be taken from you.”