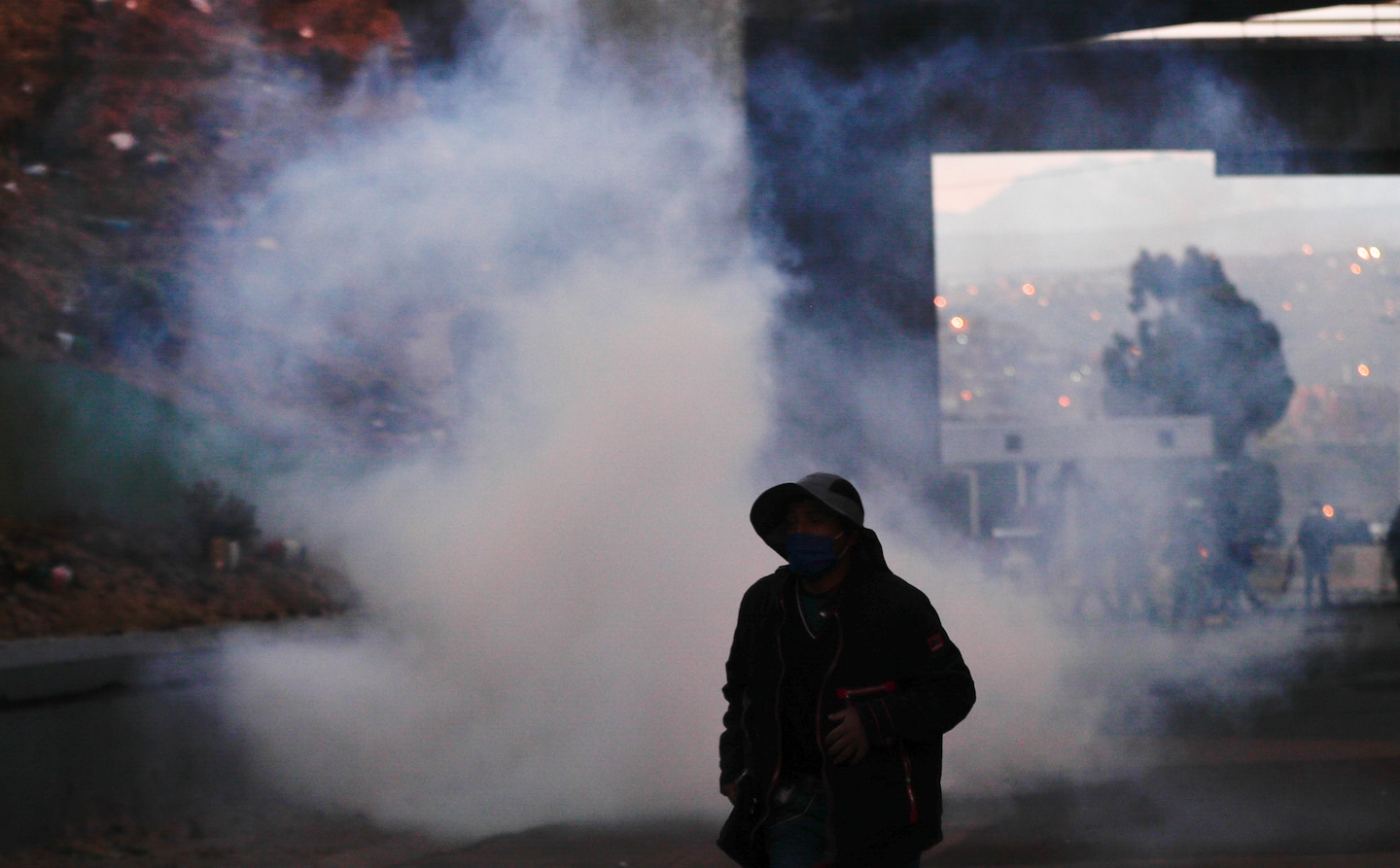 The decision triggered a wave of rage among leftist groups, who interpreted it as an attempt by the right-wing Áñez to extend her highly contentious interim presidency. Protesters have used sandbags, woodpiles and burning tires to shut down main highways.

Representatives of some of the groups that are protesting were locked in talks with congressional leaders on Tuesday, seeking to draft an agreement that would include a firm date ratified by the legislative assembly and an election to be observed by the United Nations.

But some protesters were demanding more — including Áñez’s resignation. The leaders of Bolivia’s socialist movement have called for calm and dialogue. But the crisis is testing their ability to control their rank and file.

“We are in a dictatorship, and we are in the streets because we want a return to democracy,” said Segundina Orellana, executive director of the group of coca leaf farmers, from a roadblock in the central city of Cochabamba. Áñez “has used the pandemic as a pretext to cling to power. We want immediate elections. There is no trust anymore. We are the majority in this country, and we will not allow them to treat us like this.”

The crisis is highlighting societal rifts that have widened dangerously during the pandemic. The election is effectively a three-way power struggle among the pro-U.S. conservative forces that back Áñez, a moderate opposition and the socialists, who are trying to reclaim leadership nine months after longtime former president Evo Morales went into exile.

The Trump administration has continued to back Áñez amid mounting evidence her interim government has launched a brutal campaign to silence dissent, quash freedom of the press and exact retribution against the political left.

Áñez, who last year at this time was a second vice president of the senate from a minority party, was installed as caretaker leader in an agreement brokered by opposition parties, the Catholic Church and the European Union after Morales fled the country in November. She initially pledged she would not run for a full term — her only priority, she said, was to establish new elections — but has since declared her candidacy.

Áñez has drawn sustained criticism for her government’s handling of the coronavirus. South America’s poorest country has reported more than 91,000 cases and 3,700 deaths; Áñez and several other senior officials have been infected.

Tensions escalated Monday after authorities announced an investigation into senior socialist leaders for allegedly masterminding the blockades, a charge they deny. The targets include former Morales aide Luis Arce, the current front-runner in the election. He has publicly cautioned demonstrators to exercise restraint.

Analysts say it’s doubtful any agreement, even if backed by the socialists, will satisfy the grass roots anger now aimed at Áñez.

“I don’t think you can say [the socialist] leadership is controlling this thing,” said Kathryn Ledebur, director of the Andean Information Network, a think tank based in Cochabamba. “I’m not sure they have the power to stop it.”

The blockades have raised fears of a replay of the kind of violence seen last year after official election results showed Morales eking out a narrow victory for a fourth term as president. A review by the Organization of American States found widespread irregularities in the October vote.

Áñez has called for a national dialogue to reach a new consensus around the Oct. 18 election date.

“Bolivia has two paths,” she tweeted this week. “The path of blockade, mourning and pain that [the socialists are] proposing; or the path of dialogue, health, economic reactivation, and generation of jobs that we are proposing.”

Talks aimed at defusing the crisis advanced Tuesday with increasing hopes of a pending deal, according to two people familiar the negotiations who spoke on the condition of anonymity because the discussions remained ongoing.

“U.N. representatives have been crucial in this dialogue,” said one of the people. “The bases of the social movements are supposed to give an answer today.”

A spokesman for U.N. Secretary General António Guterres said Guterres was “following with concern” the developments in Bolivia, welcomed the “readiness” of Áñez’s government, the legislature, parties and social movements to enter into dialogue and urged “continued restraint.”

On Monday, Morales, now living in exile in Argentina, asked supporters to consider a proposal from Bolivia’s electoral tribunal that would describe the Oct. 18 election date as “unpostponable and immovable.” On Tuesday, he warned backers “not to fall for the provocations of those who would lead us to violence.”

Yet tensions continued to rise. Pánfilo Marca, president of Bolivia’s Federation of Miners, told reporters Tuesday his group was giving authorities 72 hours to resolve the election date dispute they would march on the presidential palace with 20,000 protesters — “where we will be demanding the resignation of the head of the interim government.”

Áñez’s government has said that the blockades have prevented desperately needed shipments of oxygen from arriving at hospitals overloaded with coronavirus patients. Authorities have threatened to end the protests by force if necessary.

“We are not going to allow people to die in hospitals due to the lack of oxygen because of a group of irresponsible people,” Interior Minister Arturo Murillo told reporters in La Paz.

Blockade leaders, however, have dismissed those claims as false — they say they are allowing ambulances and trucks with medical supplies to pass.