The Capitals were a mess in Game 1. That should make it easy to improve. 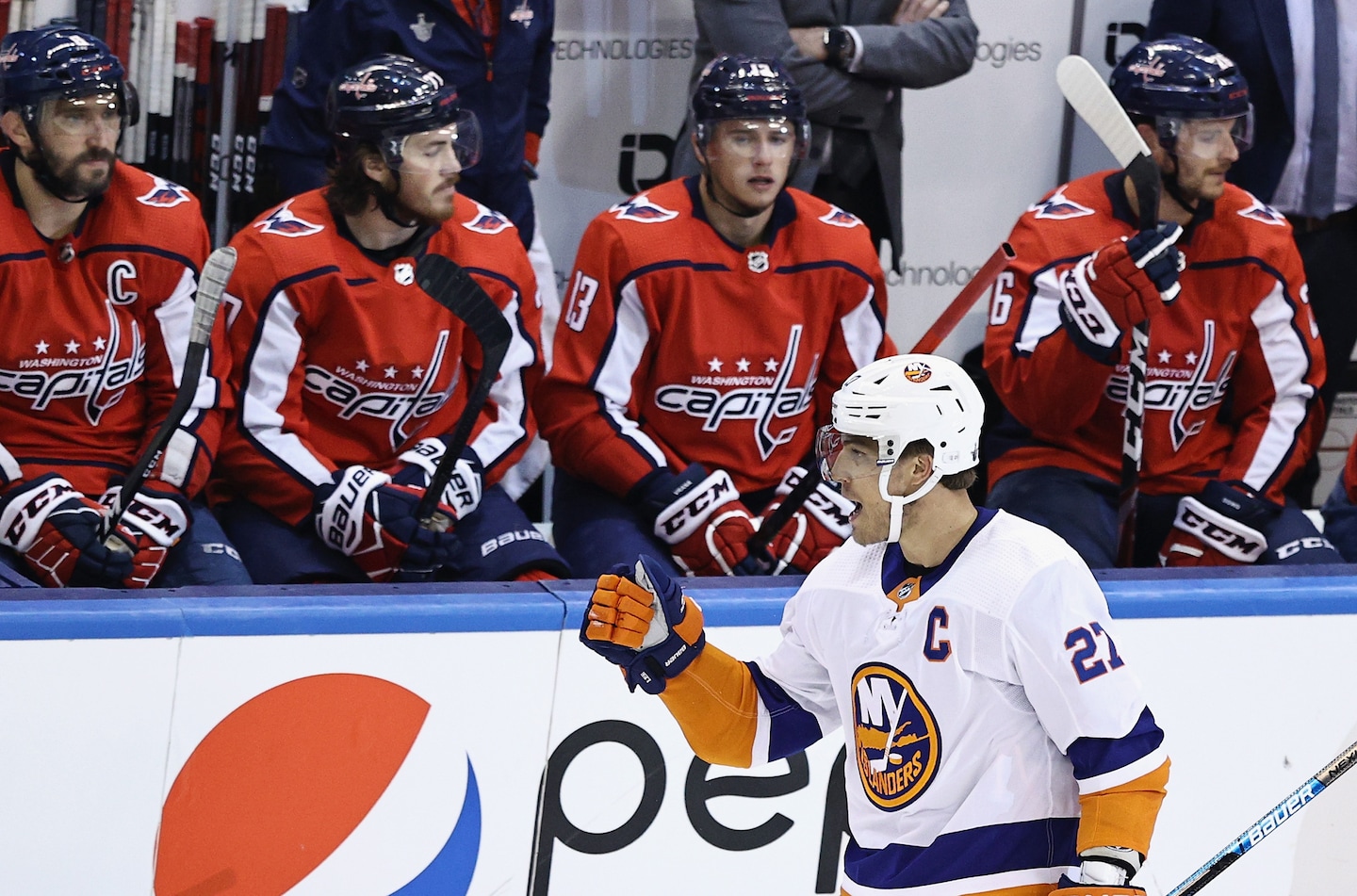 It’ll be tempting for the Caps to recall how well they played in taking a 2-0 lead in the first 38 minutes of Wednesday’s 4-2 loss and overlook the scary longer-term implications of the way the Islanders outplayed them in five-on-five situations.

After their defeat, the Caps followed standard, and entirely logical, operating procedure in the NHL by lobbying for a suspension for Islanders captain Anders Lee after a hit that knocked Nicklas Backstrom out of the last two periods and landed him in the concussion protocol, ruling him out for Friday’s Game 2.

Lee’s blow seemed in the mean spirit of doing opportunistic damage to a foe’s first-line center. But the NHL deemed the play, which earned a two-minute interference penalty and started a Lee-John Carlson scuffle moments later, not worthy of suspension. That should only tick the Caps off more.

“They’re trying to take that [play] out of the game,” Carlson added of the way Backstrom, looking back at a pass, turned around just in time to glimpse Lee’s attempt to blast him from the NHL’s Toronto bubble all the way to the one in Edmonton. “Nicky doesn’t get hit very often. That should tell you all you need to know. He’s one of the most aware players in the league.”

In part, that may be because Backstrom missed 40 games in the 2011-12 season because of concussion issues, which the Islanders, and ex-Caps coach Barry Trotz, certainly know.

Capitals Coach Todd Reirden also played the Suspend That Villain card as forcefully as he could. Backstrom “was extremely vulnerable. … It’s as simple as that — late hit, player wasn’t expecting it. And it’s predatory.”

Of course, “dirty hit” and “predatory” are fighting words, even in a league where “Good afternoon” can get the gloves to drop.

The NHL’s written and unwritten definitions of acceptable mayhem are an eternal mystery of sport. So the Caps are stuck with “that’s hockey,” especially in this meeting between teams that had what Trotz called a “physical, vicious, highly emotional” series when they last met in 2015 — with Trotz on the other side. The question now is: Can the Caps move on — without Backstrom for an undetermined time — to control this series?

They certainly rebounded often in their Stanley Cup run, when they trailed in games in all four series: 2-0, 1-0, 3-2 and 1-0. There’s no reason a Caps team with 90 regular season points (first in the Metropolitan Division) should lack confidence against the Islanders, who were fifth in the same division with 80 points (in one fewer game).

On paper and ice, the talented, offensively oriented Caps and the structured, low-star-power, defense-first Islanders are as even as their 4-4 head-to-head record over the past two seasons, with the scoring in those games (21-21) also tied entering this showdown. But such reassurances ignore every aspect of Game 1.

The Caps can only dream of games when a Trotz-coached club will be so undisciplined that it takes seven penalties, many completely unnecessary. There will probably be no more such gifts. Also, the Caps squandered two glorious power-play goals by T.J. Oshie — the kind of plays that define No. 77 and show his make-you-gasp combination of hand-eye coordination, grit and spooky anticipation.

The Caps wasted an especially fine performance from Oshie, who had four blocked shots and four big hits, plus a sprawling improvised “save” when he swiped a loose puck out of the Caps’ crease when it was six inches from the goal line.

Oshie wasn’t just the Caps’ player of the game. He was almost their only player in the game.

The evening turned when goalie Braden Holtby whiffed on a shot, possibly ticked by a defenseman, to cut Washington’s lead to 2-1 with 1:03 left in the second period. Some think, without crowds, that there will not be many obvious momentum swings in these playoffs, moments when you see one team’s energy level soar while the other wilts — with that gap widening all the way to game’s end. But it happened in Game 1. From that instant, the Caps flopped — skates up — getting outworked while also making a flood of mental mistakes.

In the first minute of the third period, the Caps failed to clear the crease, contributing to a point-blank Lee goal.

New York’s winning goal was the epitome of a bad-look gift as the Caps, who allowed nine careless shorthanded goals in the regular season, permitted yet another. On a Caps power play, Alex Ovechkin skated back like a strolling pedestrian as he “chased” a puck that was shot softly into the Caps’ end. What would have happened if he had hustled back?

With that tone set, it was little surprise to see young Jakub Vrana wander back at his leisure on what turned into a three-on-two New York rush. That crucial third Islander — Vrana’s man — scored on a layup rebound.

All these mishaps and misdemeanors can be wiped away by a strong Game 2 Friday night. Even though Game 1 winners have advanced 69 percent of the time in NHL history, the Caps have three things going for them.

First, they should have Lars Eller back; the center was held out of Game 1 after returning from paternity leave. That seemed sensible, given his lack of on-ice practice during four days of back-in-the-bubble quarantine. But when Backstrom was lost, the Caps’ choice not to have Eller active created a double void.

Second, even if they disliked the Islanders before Game 1, that emotion has now ramped up.

“We weren’t happy with how that game finished up. So, don’t want to talk too much in detail about it, but we’ve addressed some things [in 5-on-5 play],” Tom Wilson said Thursday. Then, of the Backstrom hit, Wilson added, “I definitely think it’s fuel for the fire. … He’s a leader for us. Guys have to step up and try to jump into a (bigger) role. … But it’s a hit that obviously we didn’t like.”

Third, the worse you’ve played in a loss, the more you can improve the next time you get a chance. The Caps were so limp and lame for the last 22 minutes that their room for improvement in Game 2 can be measured in miles.

If they fail to atone for a wasted win and fall behind a tough, disciplined Trotz team by two games, then their next measurement may also be in miles — 483 of them from Toronto back to Washington.

In the playoffs, urgency is the virtue that counts most when it arrives one game before you desperately need it.