Britain mounted a heroic effort to build ventilators. But it never needed them. 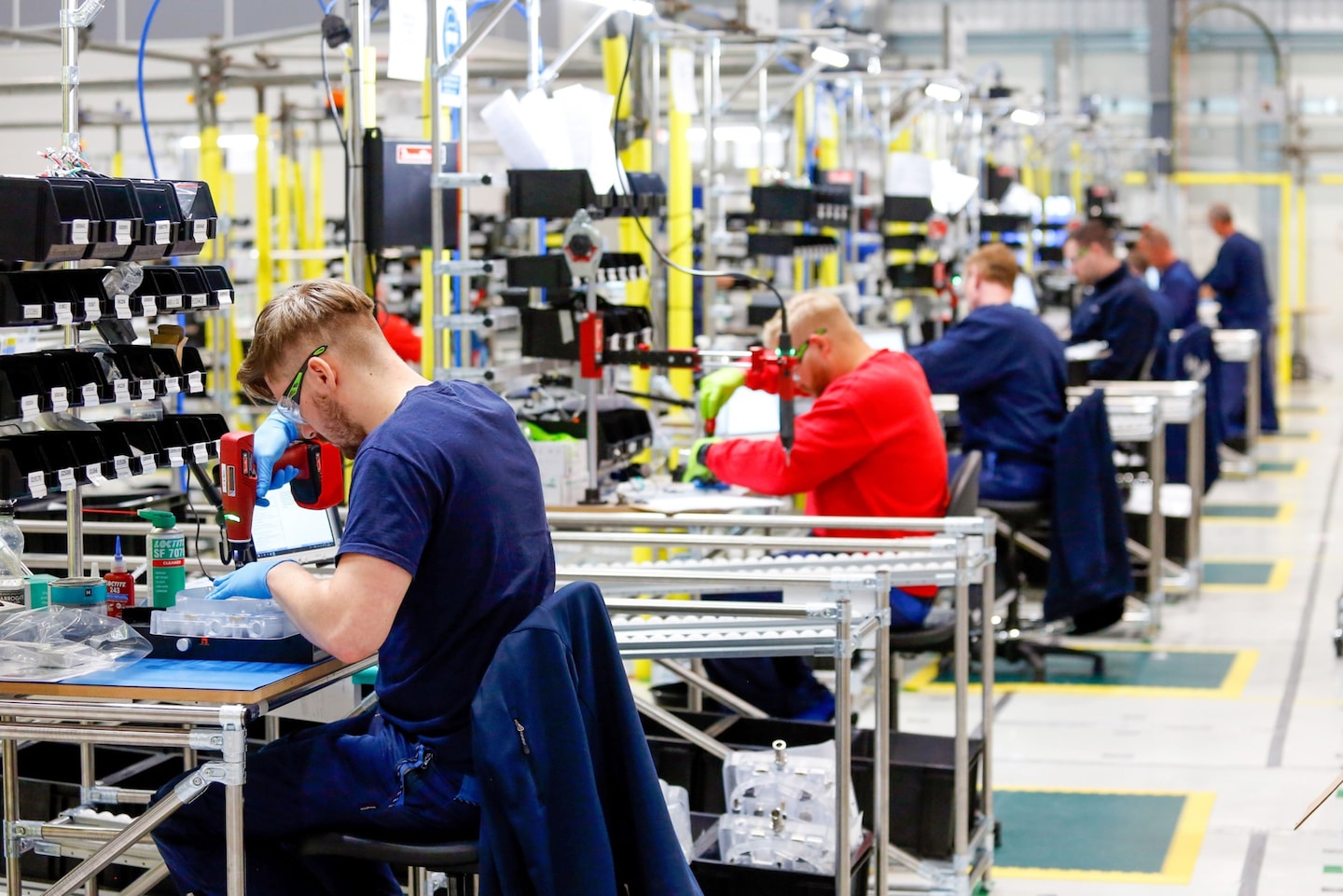 And in a remarkable, almost Hollywood-ready story, a consortium of old-school British companies — which normally make things like passenger-jet wings and Formula 1 racecars — responded, teaming up with a couple of small-time medical-device companies to pull off the near-impossible.

By July, the production teams in the UK Ventilator Challenge had delivered 13,437 of the potentially lifesaving machines to the National Health Service, more than doubling the state-supported care provider’s stock.

The turnaround was head-spinning, especially by English manufacturing standards. Assembly lines that had been producing 10 or 20 ventilators a week in small bespoke shops in the countryside were soon cranking out more than 400 a day, with help from Ford, Airbus, McLaren, Rolls-Royce, GKN Aerospace and other giants, scaling up to a 24/7 operation employing more than 3,500 front-line technicians at seven plants.

“I’ve done a fair few things in my career. But I’ve never done anything with the speed or the intensity of this project,” said Graham Hoare, CEO of Ford of Britain. “This singular need, this need to save life, and the recognition that we could make a difference, was really powerful.”

The effort by participants was inspiring. But its practical impact was far less so.

In keeping with the British government’s overall response to the virus — in testing and tracing, providing protective gear for medical workers and protecting the elderly, particularly those in nursing homes — there was a heroic dash that delivered results late.

The bulk of ventilators made by the consortium arrived months after the outbreak’s peak in April. Of the 11,683 machines manufactured by Penlon, the main British provider, only one was used on patients, as part of its approval process.

One hundred of the Penlon devices are in NHS hospitals, ready to go, said Craig Thompson, the company’s head of products and marketing. The rest sit in storage, he said. The numbers are similar for the other, smaller provider, Smiths Medical.

Moreover, the Penlon device is based on a model used by anesthesiologists and is classified as an “Emergency Ventilator for the treatment of Covid 19.” It is not an ICU ventilator.

Johnson hailed the Ventilator Challenge as “proof of just how much Britain can achieve when confronted with a difficult problem — bringing together the best minds in manufacturing, innovation and design.”

But the initiative had a second track that also gripped the popular imagination — a call for British inventors to design and build from scratch entirely novel ventilation devices that could pass safety and efficacy tests and be manufactured in weeks. That effort ended in a bit of a fog.

But in the end, only a handful of novel breathing machines met the performance requirements. None were certified for sale by Britain’s regulatory authorities, and the government’s preorders were canceled. None made it to the NHS.

Andrew Farmery, an Oxford professor of anesthesiology who was a co-inventor of one of the low-cost “rapidly deployable ventilators,” said the government erred by running the program as a come-one, come-all contest, which he compared to posting a flier on a bulletin board in a town hall. Far better, he said, would have been to assemble teams with proven skills.

The invention challenge drew numerous tinkerers with no experience making precision medical devices for use on the critically ill. Some participants, who spoke on the condition of anonymity to criticize the government, complained of “confusion” and “shifting goal posts.”

“It was a bit facile,” said Farmery, whose team did create a prototype for a scalable, inexpensive emergency device.

That machine, dubbed OxVent, was an emergency ventilator stripped down to its minimal function. A video produced by the group shows a simple bench-top device with pumps and hoses, built with off-the-shelf components already in Britain because the supply chains from Asia were unreliable.

A standard ICU ventilator retails for $20,000. The OxVent could be built for less than $1,200. But would clinicians use it? Seeing it, would a family want it used on their loved one?

In an April memo obtained by the Financial Times, the clinical and technical advisory group working under the health equipment regulatory authority warned that these basic ventilators would “result in the need for more ventilators, more oxygen, more drugs, more ventilator days, more staff and almost certainly worse patient outcomes.”

As it turned out, Britain’s health-care system did not implode, as the doubling of new infections every three days, seen in March, was slowed by a shutdown embraced by the population. The number of new infections, hospitalizations and deaths crested in April. A few hospitals teetered at the edge of capacity, but the country never ran out of ICU beds or its existing supply of breathing machines. Clinicians also began to try other treatments, waiting longer to deploy mechanical ventilators.

As a result, the NHS hasn’t needed the UK Ventilator Challenge devices — although they may ultimately prove to be lifesaving if Britain is overwhelmed by a large second wave of infection in the fall or winter.

In an interview with The Washington Post, Richard Horton, editor of the British medical journal the Lancet, questioned why the government did not acknowledge the urgent need for the devices until March, two months after doctors in the Chinese epicenter of Wuhan were reporting crushing caseloads of dying patients in their ICUs.

A parliamentary inquiry also noted that in March the government didn’t really seem to know exactly how many ventilators the NHS had on hand — and that the numbers changed depending on which talk show a minister appeared on. Officials said 30,000 were needed but revised that down to 18,000 in April.

Johnson has resisted calls for a serious review of the government’s coronavirus response, saying now is not the time. Critics point out that Britain has the highest number of excess deaths in Europe during the pandemic and one of the highest covid-19 mortality rates in the world — meaning that now, before a possible second wave arrives, might be the ideal time.

Still, the government’s production of ventilators is generally seen as a win.

The Ventilator Challenge made a lot of sense in March, said Tim Minshall, a professor of innovation at the University of Cambridge.

“Remember that sense of panic,” he said, recalling the virus’s arrival in Britain after sweeping across Italy and Spain and 10 Downing Street’s announcement that the “reasonable worst-case scenario” was that many people might die for lack of ventilators.

So the government scrambled and announced a three-bet approach: Buy as many ventilators as possible from overseas; scale up production by Britain’s handful of existing small ventilator manufacturers; and invent something simple, new and fast at home.

“It was a sensible strategy,” Minshall said of the three bets.

In the end, only some hundreds of ventilators were available on the overseas market. Others were borrowed from private hospitals in Britain. None of the novel devices were manufactured.

But the 13,437 emergency ventilators ultimately produced by Penlon and Smiths Medical are ready on standby — just as the government’s temporary “Nightingale” hospitals, built in mere weeks in conference centers, await patients if a second wave hits.

“As a medical supplier, I hope that my devices are used, but in this case, I hope my machines are not used,” said Guru Krishnamoorthy, the CEO of Penlon, who marvels at what was done.

“We created a fabulous industrial engine,” he said, noting that other countries also were scrambling not only to buy ventilators on the international market but to ramp up domestic production.

“I don’t think any other campaign succeeded in creating as many ventilators” as quickly as Britain did, he said.

Dick Elsy, CEO of the High Value Manufacturing Catapult, a group of manufacturing research centers in Britain, was instrumental in organizing the Ventilator Challenge. He called it a “stop-at-nothing project.”

When the group ran out of a 12-year-old computer chip, which was out of production, it found a company to make it. “That would normally take months,” Elsy said. “It took a week.

“We built resilience,” he said.