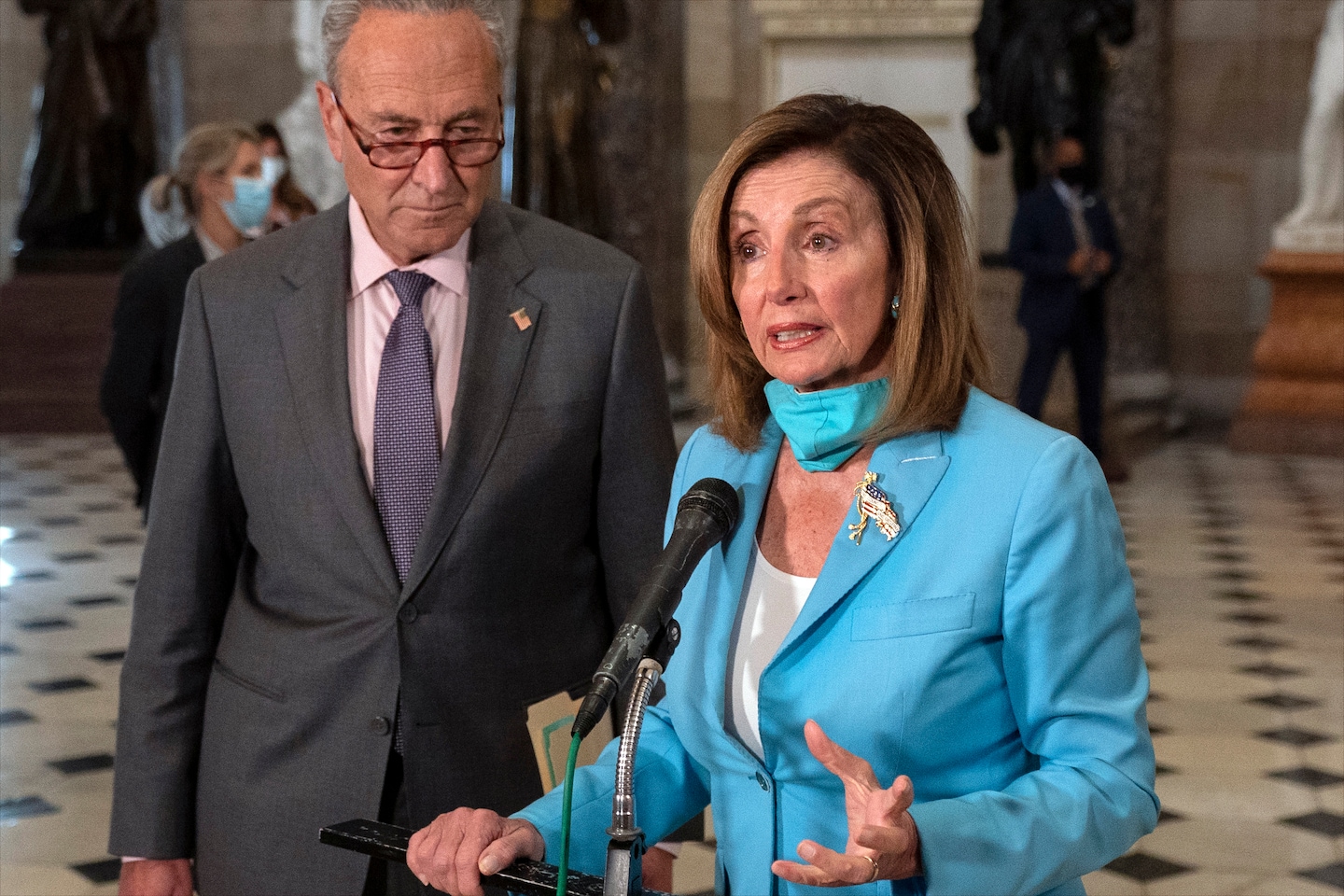 Those most affected by reports of slowdowns in delivery services include veterans, senior citizens and rural residents who have long voted Republican, arming Democratic challengers and incumbents with a salient campaign issue. Democrats are already blanketing the airwaves, latching on to the opportunity to highlight support for an institution that has a 91 percent approval rating, according to an April survey by the Pew Research Center.

“Senator Perdue needs to take a stand on principle for once in his career and demonstrate that his oath to the Constitution and his constituents is more important to him than his allegiance to President Trump and his Political Party,” said Jon Ossoff, who’s running against Sen. David Perdue (R-Ga.) this cycle. “And if he allows the president to sabotage voting by mail, he will be condemned by history as an accomplice to this attack on our democracy.”

Trump said Thursday that he opposes both $3.6 billion in election aid for states and a $25 billion emergency bailout for the Postal Service because he wants to restrict how many Americans can vote by mail, part of a broader assault on mail-balloting that he has repeatedly claimed, without evidence, would invite widespread fraud. Trump, his family and many top aides, by contrast, have regularly voted by mail themselves.

Democrats uniformly balked at Trump’s move to restrict mail voting during a pandemic, when many Americans fear heading to the polls for fear of catching the novel coronavirus, while most Republicans were silent or offered qualified objections.

“Everyone depends on the USPS. Seniors for their Social Security, veterans for their prescriptions, small businesses trying to keep their doors open,” Obama tweeted Friday. “They can’t be collateral damage for an administration more concerned with suppressing the vote than suppressing a virus.”

Democratic incumbents and candidates across the nation are already trying to tie Trump’s words to their GOP opponents. Vulnerable Democratic incumbents like Reps. Kendra Horn (Okla.) and Anthony Brindisi (N.Y.) have been latching onto the #SaveThePostOffice Twitter hashtag.

In South Carolina, Rep. Joe Cunningham (D) said that 8 in 10 veterans in his district get their prescriptions by mail and 90 percent of those are delivered through the Postal Service.

“This is a blatant attack on our veterans, the majority of whom receive their prescriptions through the mail,” said Cunningham, who’s up for reelection in a district Trump won by nearly 13 points in 2016.

Some Democrats sought to raise money off the issue. Former Virginia governor Terry McAuliffe told voters in a Friday fundraising email that “Trump admitted he’s sabotaging the Postal Service” and “here’s what we can do about it.”

“The bigger our margin, the less this clown can play games with the result,” McAuliffe wrote. “I’m doing everything I can to make that happen and I need your help. Pitch in anything you can afford right now and help me fight for Virginia Democrats.”

Republicans immediately appeared to determine that Trump was creating potential political problems for them. In a rare break from the president, House Minority Leader Kevin McCarthy (R-Calif.) said Friday on CNBC that he supports funding the Postal Service, which has warned 46 states and D.C. that due to deficiencies, it cannot guarantee all ballots cast by mail will arrive by Election Day and be counted.

“The Postal Service will have the funding that it needs,” McCarthy said. “We will make sure of that.”

Even Postal Service workers aren’t so sure, however. On Friday, the National Association of Letter Carriers, a union comprising nearly 300,000 postal workers, endorsed presumptive Democratic nominee Joe Biden for president, with its leader arguing that “Biden is — was — and will continue to be — a fierce ally and defender of the United States Postal Service (USPS), letter carriers, and our fellow postal brothers and sisters.”

Democrats say Trump’s move boosts them threefold: For one, it creates a space for Democrats to talk about policy issues that resonate at home — taking care of veterans, prescription drugs, social security checks — and arms them with a credible claim that Trump is putting his own reelection over those needs.

Second, it cuts to the heart of rural economies that depend on the Post Office, offering Democrats an opportunity to reach out to new voters who typically turn to Republicans.

Democrats also believe they can use Trump’s attempts to curb mail-in voting as a motivator to get people to vote early.

“I would say if you were going to vote by mail, that you vote early because they will try to say, ‘Well, it doesn’t have a stamp, so it doesn’t have to be postmarked so we’ll just throw it in the corner,’ ” Pelosi said Friday on MSNBC. “They’re going to do everything they can to slow the mail, and that’s just not right. So, again, vote early.”

In West Virginia, Sen. Joe Manchin III (D) spent Friday touring a quartet of U.S. post offices in the state and highlighting what he called an “all-out war” against the Postal Service by the Trump administration.

The often mild-mannered Manchin said in an MSNBC interview Friday that Postmaster General Louis DeJoy “won’t even talk to us” and “shouldn’t even be there to begin with.”

“Any way you can get rid of him, please do so,” Manchin said.

Other Democrats warned that the integrity of the U.S. election is at stake and urged an aggressive response. Obama’s former campaign manager, David Plouffe, took to Twitter on Thursday to push House Democrats to “go to war for our country” and start a major investigation in the final weeks before the election.

“We’ve never needed Democrats in Congress more than we do now,” he wrote. “The whole enterprise is on the line. The Biden campaign has no oversight or fiscal power. Neither does the press. Letters, statements, outrage are not enough. Time to go to the mattresses. Now.”

While Pelosi called Trump’s moves “a domestic assault on our Constitution,” it is unclear whether Democrats will start a new probe less than three months from Election Day. Democratic leaders in the House recently canceled a week of voting in September and are only scheduled to be in for about two weeks before the election.

For now, the issue will remain the talk of the campaign trail. In a Friday interview, Rep. Tom Malinowski (D-N.J.), who hails from a swing district, brought up the debate, unprompted. While discussing the impasse between the parties on the coronavirus relief bill, he mused that Trump might be intentionally sabotaging an agreement because he knows any deal would include Postal Service funding.

“We do need to begin to ask the question whether preventing a free and fair election is more important to the president than getting relief for the economy — I just can’t, I can’t explain their position rationally in any other way right now,” Malinowski said. “I’m beginning to suspect that the president would rather mess with the post office than help the economy because he knows that any deal on a coronavirus bill necessarily will include provisions to fund and protect the post office.”

Jenna Johnson contributed to this report.

Biden says restoring abortion rights is up to voters

Miss Manners: Should couples sign greeting cards for each other?