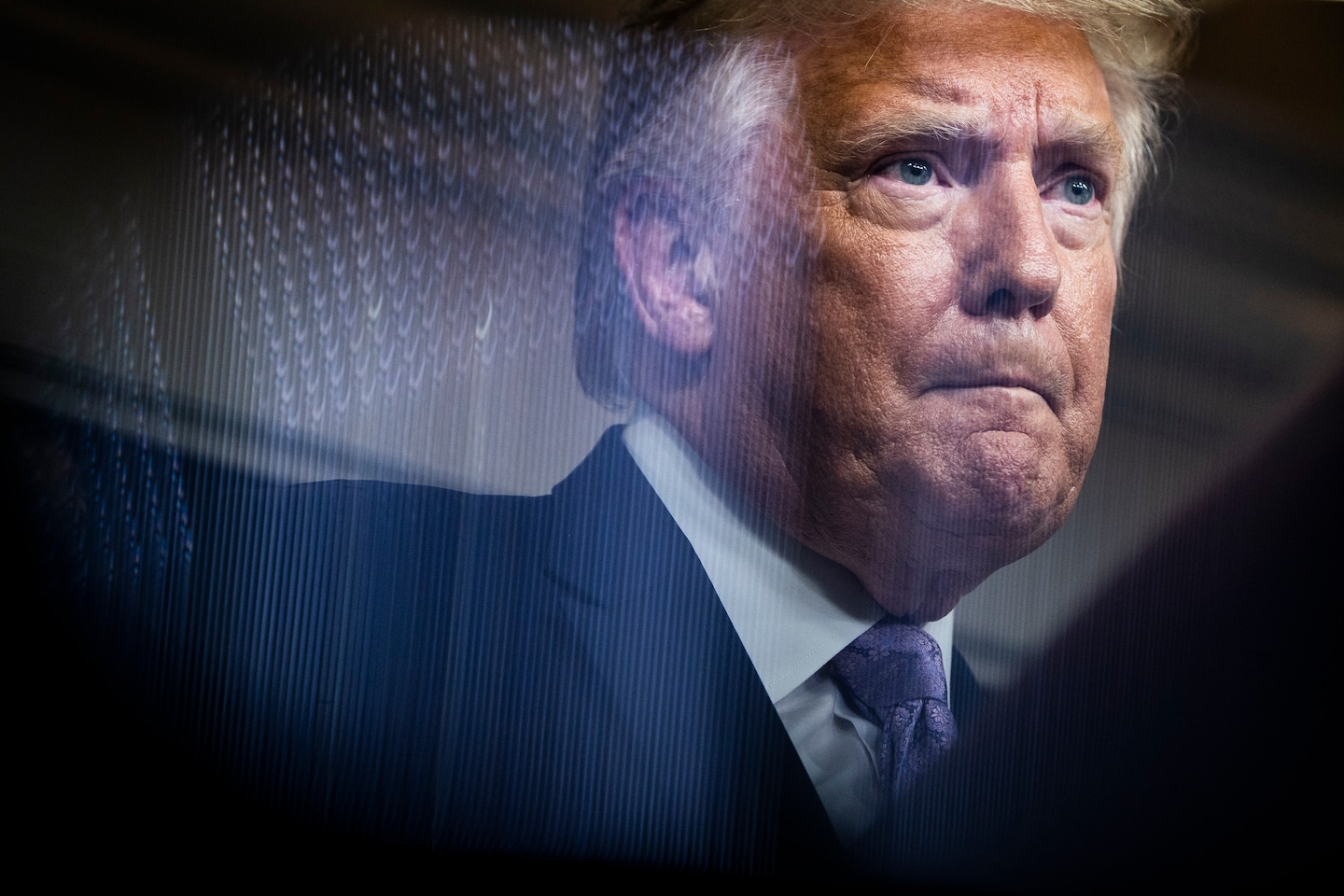 Then Trump complained to senior White House advisers that Jeff Bezos — a presidential foe in part because he owns The Washington Post, whose news coverage the president thought was unfair and too tough on him — was “getting rich” because Amazon had been “ripping off” the Postal Service with a “sweetheart deal” to ship millions of its packages, one of them recalled. They explained that this was not true and that the Postal Service actually benefited from Amazon’s business, the adviser added, but the president railed for months about what he described as a “scam.”

And now Trump has fixated again on the Postal Service, this time trying to make it a tool in his reelection campaign by slowing mail service, blocking an emergency infusion of federal funds and challenging the integrity of mail-in balloting. The president acknowledged last week that his opposition is rooted in his desire to restrict how many Americans can vote by mail.

The breathtaking moves by the Trump administration this summer to disrupt a government service during the coronavirus pandemic — under the argument that it will boost operational efficiencies — represent the culmination of Trump’s grievance-fueled crusade against the Postal Service that dates to the start of his presidency. Many of his complaints have centered on the post office’s chronic financial problems, which have worsened during the pandemic.

“The post office has been run poorly for many, many decades,” Trump said at a news conference last Thursday as he defended his administration’s actions. “Great people in the post office, incredible people, but they’ve had very bad leadership for many years. So we’ll get it straightened out.”

With nearly 180 million Americans eligible to vote by mail, and with the pandemic generating health safety concerns about in-person voting, both parties are preparing for a historic surge in mail-in balloting.

Trump has predicted — without supporting evidence — that mail-in balloting could produce “the greatest rigged election in history,” as he put it at a Wednesday news conference.

Voting rights advocates say the Trump administration’s actions with the Postal Service could result in widespread delays and voter disenfranchisement, and jeopardize the nation’s ability to administer the election.

“This is a repugnant, unbelievable scenario unfolding in front of public eyes,” said Rep. Gerald E. Connolly (D-Va.), who chairs a congressional subcommittee with oversight responsibilities for the Postal Service.

“The Postal Service is the one arm of public service that reaches every household and every business every day in America,” Connolly said. “I believe Trump and the Republicans are playing with fire in trying to disrupt or discredit the Postal Service.”

Trump opposes a $25 billion emergency bailout sought by the Postal Service, as well as a Democratic proposal to provide $3.6 billion in additional election funding to the states for help carrying out voting, as part of a broader coronavirus relief package tied up in congressional negotiations. He does support a smaller infusion of $10 billion for the Postal Service, according to a White House official.

Trump’s fury with the Postal Service and mail-in balloting has become something of an obsession in recent weeks. The president devotes extensive time to reading news reports and other materials about mail-in ballots, talking about the topic with his advisers and thinking about how to block such voting, according to one senior administration official.

During recent meetings with advisers and Senate Majority Leader Mitch McConnell (R-Ky.), Trump aired his grievances at length about voting in the states of Nevada and New York, as well as Paterson, N.J. — where a unique election fraud case has been heavily covered by conservative media — and other places where he said mail-in balloting should not be expanded, according to two people familiar with the meetings.

Trump did not explicitly mention the Postal Service, but he told those in the meetings that he wanted to block states from expanding universal mail-in ballots by filing more lawsuits, these people said.

These sources, as well as other officials who recalled Trump’s private comments and characterized his thinking about the Postal Service, spoke on the condition of anonymity to be candid without risk of retribution.

White House spokeswoman Sarah Matthews defended Trump by saying he is working “to ensure the security and integrity of our elections.”

“All Americans deserve an election system that is fair and balanced, and President Trump is highlighting that Democrats’ plan for universal mail-out voting would lead to fraud,” Matthews said, pointing to reports of expected mail delays to support her boss’s prediction of fraud.

One of Trump’s closest allies, Sen. Lindsey O. Graham (R-S.C.), criticized the president’s opposition to funding the Postal Service at the requested levels, noting that the service is overwhelmingly popular with the American public and is an essential resource for people who receive their prescription medicines through the mail.

“The idea of cutting the Postal Service’s budget is not the right approach,” Graham said, adding that he thinks Trump threatened its funding because “he’s trying to stop what he sees as an effort to have mass mail-in voting.”

“In the 245 years of the Postal Service, no one has seen political attacks like this,” said James O’Rourke, a professor of management at the University of Notre Dame who specializes in the Postal Service. “While for a long time we thought this was not politically driven, it’s becoming increasingly transparent in recent days that this is almost entirely political.”

Winifred Gallagher, author of “How the Post Office Created America,” said the closest historical analogy is President Andrew Jackson — a self-styled populist whose portrait Trump hung in the Oval Office soon after moving in.

When Jackson was elected in 1828, Gallagher said, “the post office was the federal government as most Americans experienced it,” considering at least three-quarters of federal workers were employed by the Postal Service. Once in office, Jackson replaced 13 percent of postal workers — almost all of whom had been aligned with his predecessor, John Quincy Adams — with loyalists, even though many of the new workers had no postal experience.

“That’s what this reminds me of, this kind of politicization,” Gallagher said. “You really have to go back to Jackson to see it.”

Trump’s changes at the Postal Service dovetail with a long-envisioned ideological project on the political right to privatize the service, a cause advanced by the billionaire industrialist Charles Koch and his late brother, David Koch, as well as other conservatives. Although abolishing the Postal Service was part of the Libertarian Party’s platform when David Koch ran as the party’s vice presidential nominee in 1980, Gretchen Reiter, a spokeswoman for the Koch network, said the Kochs’ political organization has not called for the privatization of the Postal Service.

“There’s lots of stuff they want to do, creating dysfunctionality, lessening public dependence on it, and creating a reputation for being unreliable that would seed the ground for a privatization proposal,” Connolly said.

Trump’s moves were cheered by Paul Steidler, a Postal Service expert at the right-of-center Lexington Institute, who lamented that the institution was largely ignored by previous presidents as well as by Congress.

“The degree of intensity and focus on the Postal Service is something that hasn’t been seen in quite some time,” Steidler said. “To make a suggestion that no changes should take place and everybody should sit still until Election Day is wrong.”

During his decades in private life, Trump did not demonstrate much acrimony toward the Postal Service, in part because his business interests — real estate, marketing and golf courses — did not depend on logistics the way other industries do, according to Trump biographer Tim O’Brien. His animus toward the Postal Service as president, O’Brien explained, “is entirely new in his life.”

Trump’s ire at the Postal Service grew so intense in the spring of 2018, a time when he was routinely attacking Amazon on Twitter, that his advisers griped privately about the presidential preoccupation.

As Larry Kudlow prepared to take over for Gary Cohn as National Economic Council director in 2018, Kudlow told Cohn, “I just talked to the president and we have got to do something about this special deal Amazon has with the Postal Service,” according to two former senior administration officials who described the episode, which has not previously been reported.

Cohn burst out laughing and told Kudlow: “It’s not my problem anymore. I’ve heard about this all the time since I’ve been here, and I’ve tried explaining that the post office actually competes for and wants last-mile delivery.”

Trump had long expressed private frustration with the previous postmaster general, Megan Brennan, repeatedly telling aides that he wanted to remove her. He also grew irritated with Cohn, then-staff secretary Rob Porter and other advisers when he was told some of his opinions about the Postal Service and its finances were not factual and that he did not have the authority to make changes there unilaterally.

Brennan had resisted the president’s demands to double the rates the Postal Service charges to Amazon and other package-shipping firms, a dramatic increase that could have cost the companies, as well as post office customers, billions of dollars. She repeatedly told Trump that the relationship between Amazon and the Postal Service was mutually beneficial, and that the president didn’t have the ability to undo Amazon’s contracts without a regulatory commission review.

Last year, Trump finally pushed through Congress three of his appointees to the Postal Service Board of Governors, giving the board — which had long suffered vacancies — a quorum for the first time since 2014. The Board of Governors has 11 members and elects the postmaster general. At the time, a White House spokesman rejected the idea that Trump had lobbied for his appointees to replace Brennan.

Last October, Brennan — a former letter carrier who became the first woman to head the agency — announced her plans to retire. She was replaced in June by Louis DeJoy, a businessman and Trump loyalist recruited by Treasury Secretary Steven Mnuchin. DeJoy had donated more than $2 million to GOP causes since Trump took office, attended some of the party’s most elite fundraising events, and cultivated a close relationship with Republican National Committee Chairwoman Ronna McDaniel.

DeJoy became become a lightning rod this past week amid reports of mail-sorting machines being removed from postal facilities and blue collection boxes uprooted from neighborhoods across the country.

McDaniel defended DeJoy in a statement: “Louis is an incredibly kind individual who cares deeply about his service to this country. With decades of experience running a highly successful shipping and logistics company, there is no one better suited to make improvements to the Postal Service than him.”

DeJoy met earlier this month in the Oval Office with Trump in advance of the postmaster general’s tense meeting with House Speaker Nancy Pelosi (D-Calif.) and Senate Minority Leader Charles E. Schumer (D-N.Y.). White House spokesman Judd Deere characterized it only as a “congratulatory” meeting, because DeJoy had recently been appointed, and declined to offer any other details.

At an Aug. 7 meeting of the Postal Service’s bipartisan Board of Governors, DeJoy portrayed himself as independent of the White House. “While I certainly have a good relationship with the president of the United States, the notion that I would ever make decisions concerning the Postal Service at the direction of the president, or anyone else in the administration, is wholly off-base,” DeJoy said, according to his prepared remarks.

A friend of DeJoy’s, who spoke on the condition of anonymity to be candid, said Trump’s public comments about the Postal Service “adds undue scrutiny to him” and that “he doesn’t see the president’s rhetoric as helpful.”