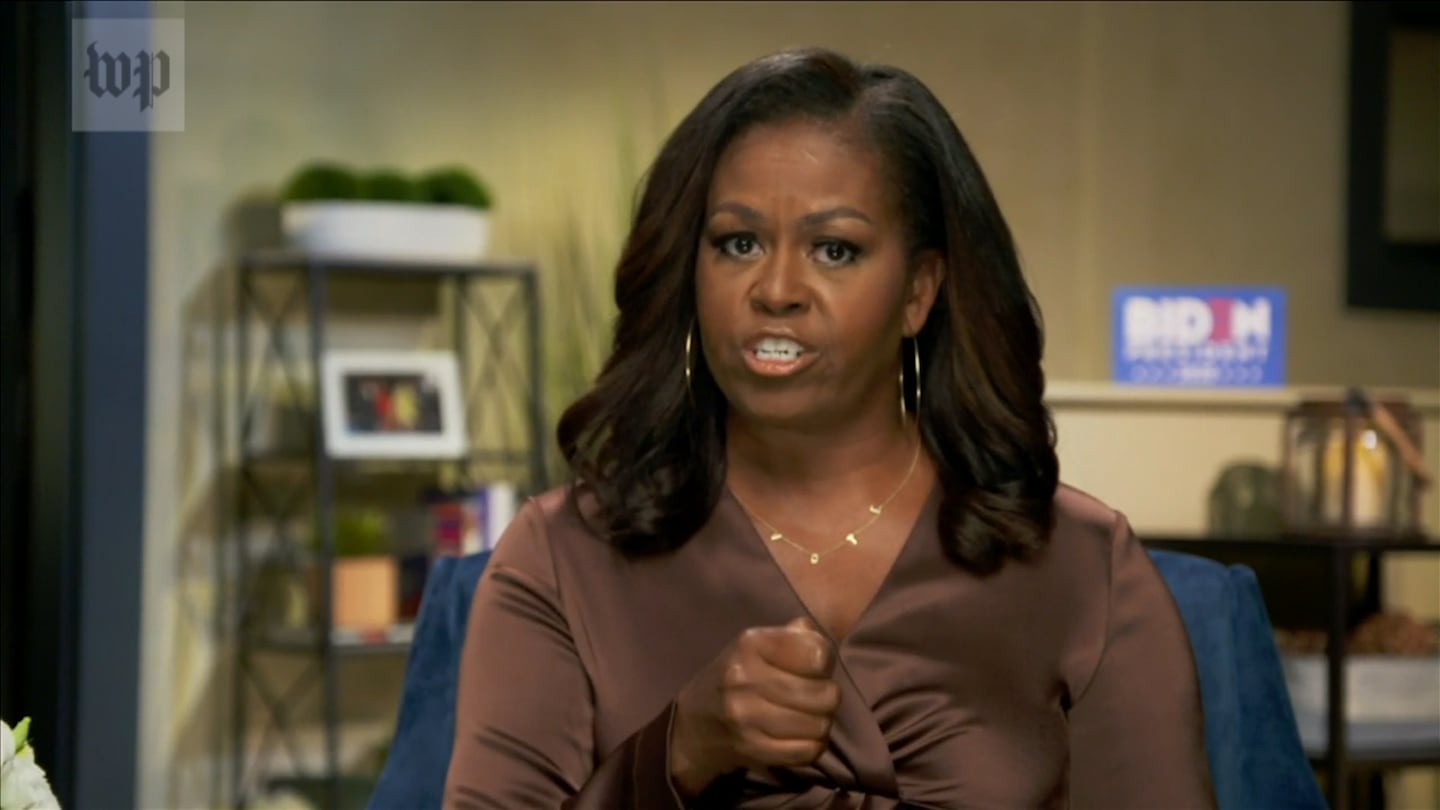 She then echoed Trump’s own words, offered by the president earlier this month in response to a question about the scale of the coronavirus pandemic’s death toll: “It is what it is.”

Obama’s speech wasn’t entirely predicated on the pandemic. Her point about Trump’s ability to handle the position extended further than the reach of the virus itself. It was a condemnation of Trumpism broadly.

Many politicians, facing a sweeping condemnation from a public figure viewed positively by 3 in 5 Americans, would simply let the moment pass. Why amplify the attack? The news cycle churns quickly; let it roll right past.

But that, of course, is not Donald Trump’s approach to such things. On Tuesday morning, he responded on Twitter.

“Somebody please explain to @MichelleObama that Donald J. Trump would not be here, in the beautiful White House, if it weren’t for the job done by your husband, Barack Obama,” he wrote. “Biden was merely an afterthought, a good reason for that very late & unenthusiastic endorsement. My Administration and I built the greatest economy in history, of any country, turned it off, saved millions of lives, and now am building an even greater economy than it was before. Jobs are flowing, NASDAQ is already at a record high, the rest to follow. Sit back & watch!”

“Looking back into history, the response by the ObamaBiden team to the H1N1 Swine Flu was considered a weak and pathetic one. Check out the polling, it’s really bad,” he continued. “The big difference is that they got a free pass from the Corrupt Fake News Media! The ObamaBiden Administration was the most corrupt in history, including the fact that they got caught SPYING ON MY CAMPAIGN, the biggest political scandal in the history of our Country. It’s called Treason, and more.”

“Thanks for your very kind words Michelle!” he concluded.

Most of Trump’s response is untrue.

It is not true, for example, that Trump’s administration “built the greatest economy in history.” The economy, while strong earlier this year, was not the greatest in either the world or American history. It’s also impossible to entirely extricate that strength from President Barack Obama’s own administration. The bull market that ended with the pandemic, for example, began under Obama, as did the consistent downward trend in unemployment and upward trend in employment. In January, Gallup asked Americans how much credit Obama deserved for the economy; more than half said he deserved at least a fair amount of credit.

It is true that Trump’s election was, to some extent, a reaction to Obama’s presidency, though much of that reaction was predicated less on what Obama did than what he represented. The election of the first Black man to serve as chief executive bolstered concerns among some White Americans that the country was moving in a direction that left them at a disadvantage. A March 2016 Post-ABC News poll found that a sense of Whites losing in American culture was a stronger indicator of support for Trump than economic difficulty.

Whether the economy can recover quickly and fully remains to be seen. Among other random metrics, Trump likes to trumpet the number of jobs added over the past three months, but that increase is entirely dependent on the number lost over the past four. If you turn off all the lights in a room and then turn several back on, you probably deserve only limited credit for the sudden spike in brightness.

Particularly if you turned those lights on so rapidly that tens of thousands of people contracted a potentially deadly virus.

Across the board, Trump’s handling of the coronavirus pandemic gets worse marks than the Obama administration’s handling of an H1N1 influenza outbreak in 2009. The president likes to point to a Gallup poll from February in which Americans expressed more confidence in the government’s ability to handle a pandemic than was indicated in 2009. But that poll preceded the federal government’s actual efforts.

By the end of April 2009, the month in which the virus emerged, two-thirds of Americans approved of the Obama administration’s handling of the situation. By mid-May, only 13 percent of Americans were concerned about contracting the virus though, by August, that figure had increased to about 1 in 5. Later in the year, a vaccine became available, but distribution was hindered by a lack of availability, something most Americans blamed on the companies making the vaccine, according to a November 2009 Fox News poll.

By contrast, 51 percent of Americans approved of Trump’s handling of the coronavirus pandemic by the end of March, according to Post-ABC News polling. Fifty-six percent expressed concern about contracting the virus at the same time. In part because the coronavirus is deadlier and more contagious than the H1N1 virus, it continued to spread broadly and kill thousands of Americans a day. A Post-ABC poll released this week shows that 40 percent of Americans approve of Trump’s handling of the pandemic as nearly two-thirds indicate that they’re worried about someone close to them contracting the virus.

Then there’s Trump’s accusations that the Obama administration was “the most corrupt in history” — echoing a popular meme in conservative media. He again accused his predecessor’s administration of having “spied on his campaign,” which he describes as treason.

During the 2016 campaign, while Obama was president, the FBI launched counterintelligence investigations into a number of people associated with Trump’s campaign. There was cause to do so. His campaign manager, Paul Manafort, had existing ties to Russia. A senior adviser, Michael Flynn, had traveled to Russia in late 2015; another adviser, Carter Page, was already on the FBI’s radar and traveled to Russia in July 2016. Another adviser, George Papadopoulos, informed a foreign dignitary that he had been informed that Russia had emails related to Hillary Clinton, which, in fact, it did.

Trump and his allies conflate investigations meant to determine whether any of those individuals were acting at Russia’s behest with the broad claim that the FBI was “spying on Trump’s campaign.” This conflation derives to some extent from Trump’s March 2017 claim that the feds had tapped phones at Trump Tower, which they didn’t — but that established a baseline of “spying on Trump directly” that his allies have since tried to reinforce.

The feds did surveil Page through a Foreign Intelligence Surveillance Act warrant which later raised questions — but that surveillance began after Page left the campaign. A confidential informant reached out to several of those under FBI scrutiny in a limited capacity. When Trump was briefed by the intelligence community as a candidate, the agents doing the briefing reported back on questions that were asked about Russia, in part because Flynn was one of the participants. (At the time, it’s worth remembering, there were broad public questions about Trump’s ability to handle the classified information.) There was not, however, any known investigatory infiltration of the campaign itself or any known effort to generally surveil Trump or his core team. The claim that his campaign was “spied on” depends largely on extrapolating outward from investigations into individuals with known contacts to Russia.

Trump’s response to Michelle Obama, in short, depends heavily on preaching to a choir that is already singing Trump’s song. There’s no effort to rebut Obama’s claims about the pandemic or about Trump’s approach to his position; instead, there’s misleading whatabouting related to the administration led by Obama’s husband. This, too, is par for the course for Trump.

For any observer evaluating their November vote, though, it’s not clear how Trump’s reply — heavily saturated in references familiar mostly to heavy viewers of Fox News — might land. Michelle Obama notes the tenuousness of the moment and the danger of the pandemic; Trump says, well, what about the H1N1 pandemic that many Americans barely remember? What about the fact that the FBI was worried about foreign influence on his campaign?

A bit later on Tuesday, Trump was asked again about Michelle Obama’s speech. Among his criticisms? The number of coronavirus deaths she listed was lower than the current total.

If nothing else, it’s a good demonstration of why most politicians wouldn’t have responded at all.