Dark versus light: Trump declares himself the only barrier to ‘anarchy, madness and chaos’ 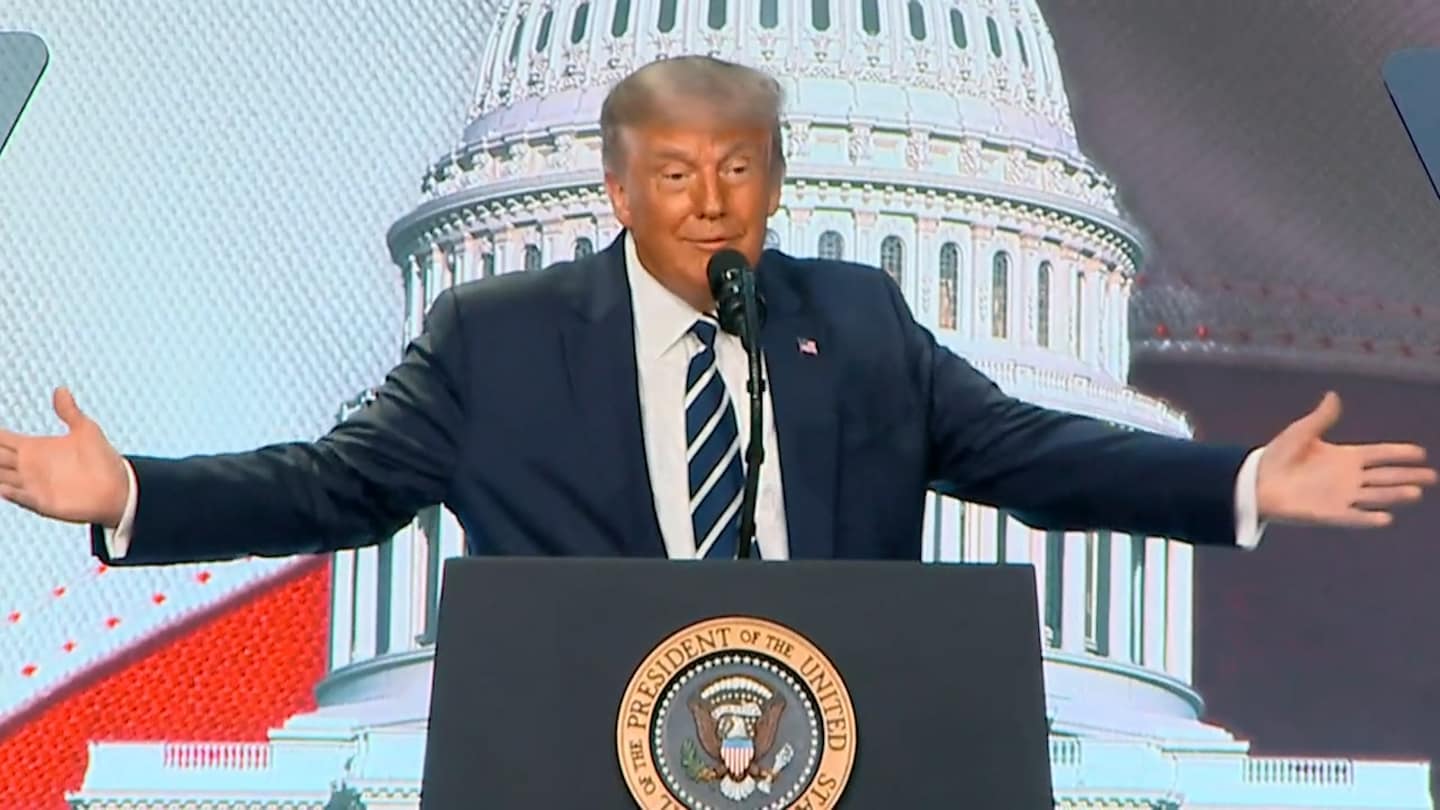 “We can choose the path of becoming angrier, less hopeful and more divided. A path of shadow and suspicion,” he added later. “Or we can choose a different path, and together, take this chance to heal, to be reborn, to unite. A path of hope and light.”

Broadly, of course, Biden was referring to Trump’s presidency as much as the toxic, draining public moment. To some extent, the former vice president was also framing the upcoming Republican convention, which will certainly try to present a positive contrast to the negativity Americans are now experiencing. But Biden knows as well as anyone that the Republican convention and its keynote speaker, Trump, will also portray a possible Biden presidency in the bleakest possible terms.

Four years ago, that’s precisely the tack Trump took in accepting his party’s nomination. It was a dark speech, as we wrote at the time, presenting a crime-riddled America in which people were suffering and suggesting that the election of Hillary Clinton would lead the country down an even worse path.

Trump offered himself as a messiah to rebut that fate.

“Nobody knows the system better than me,” he asserted, “which is why I alone can fix it.”

Should Trump’s speech at next week’s convention be similarly grim, Biden’s hoped to serve as inoculation. But, again, it didn’t take that long.

Speaking at a conservative group’s annual meeting on Friday, Trump made an even more explicit presentation of himself as the last defender of America’s future.

“I’m the only thing standing between the American Dream and total anarchy, madness and chaos,” Trump said. “And that’s what it is. I’m representing you. I’m just here. And I’m not sure it’s an enviable position, but that’s what it is.”

Much of his presentation focused on the purported threat posed by socialists, anarchists and criminals, just as his speech did in 2016. It poses an odd contrast, given that he’s the president. As when Trump said on Thursday that life under Biden was exemplified by “the smoldering ruins of Minneapolis, the violent anarchy of Portland, the bloodstained sidewalks of Chicago” — all things that have already happened during an American presidency: his.

“We have to expose this dangerous left-wing movement. We must defeat it,” Trump said on Friday. “And with an optimistic vision for America’s future, we can be greater than ever before.”

In an interview with Fox News on Friday morning, Vice President Pence criticized Biden and the Democratic convention broadly for offering “a very, very negative view of America.” For example, no mention was made, he said, of “the violence that’s besetting the families in major cities across this country.” (Instead, Pence said, the Democrats offered, among other things, “ad hominem attacks against the president of the United States” — a tactic in which his ticket would presumably never engage.)

None of this even coheres. Trump and Pence concede that things are bleak, demanding both that Democrats focus on crime and that Democrats foster crime. Trump claims an optimistic vision as he offers himself as the sole barrier to the apocalypse.

Trump’s campaign strategy in 2016 was to present everything as terrible and himself as the best solution. That meant accepting his unpopularity but emphasizing Clinton’s. It meant casting the country as teetering.

His strategy now, weirdly, is the same. Attacks on Biden as horrifying and socialist and anarchic and doddering, all at once. Paint a picture of a nation more precarious than the one he criticized four years ago. Yet offer himself, again, as the solution.

All of this plays into Biden’s framing. The Democratic convention did suggest that times are dark, but most Americans agree. Polling data from Gallup indicates that only about 1 in 8 Americans is satisfied with the direction of the country, with a fifth pointing to the coronavirus pandemic as the most serious problem and another fifth pointing to the economy. If the moment seems dark, that’s in large part because it is.

Biden’s argument was that he can lighten the stress and tension. That he can right the course. Trump’s argument as presented on Friday is that he’s the only thing keeping things from being worse. A case for optimism vs. a case for pessimism — a contrast Biden is happy to have.

While Biden’s speech drew that comparison with an explicit, obvious metaphor, it was much better captured by a speech that preceded his.

Brayden Harrington, 13, described meeting Biden at a campaign event in New Hampshire earlier this year and discussing the stutter that each had dealt with over the course of their lives. It was an immensely moving speech and one that made explicit what Biden was getting at.

There was a shadow hanging over Harrington’s life, and that conversation with Biden offered a ray of light. That was the promise Biden was making in his acceptance speech, casting Trump as part of the darkness he hoped to combat.

It was an analogy that Trump then echoed.