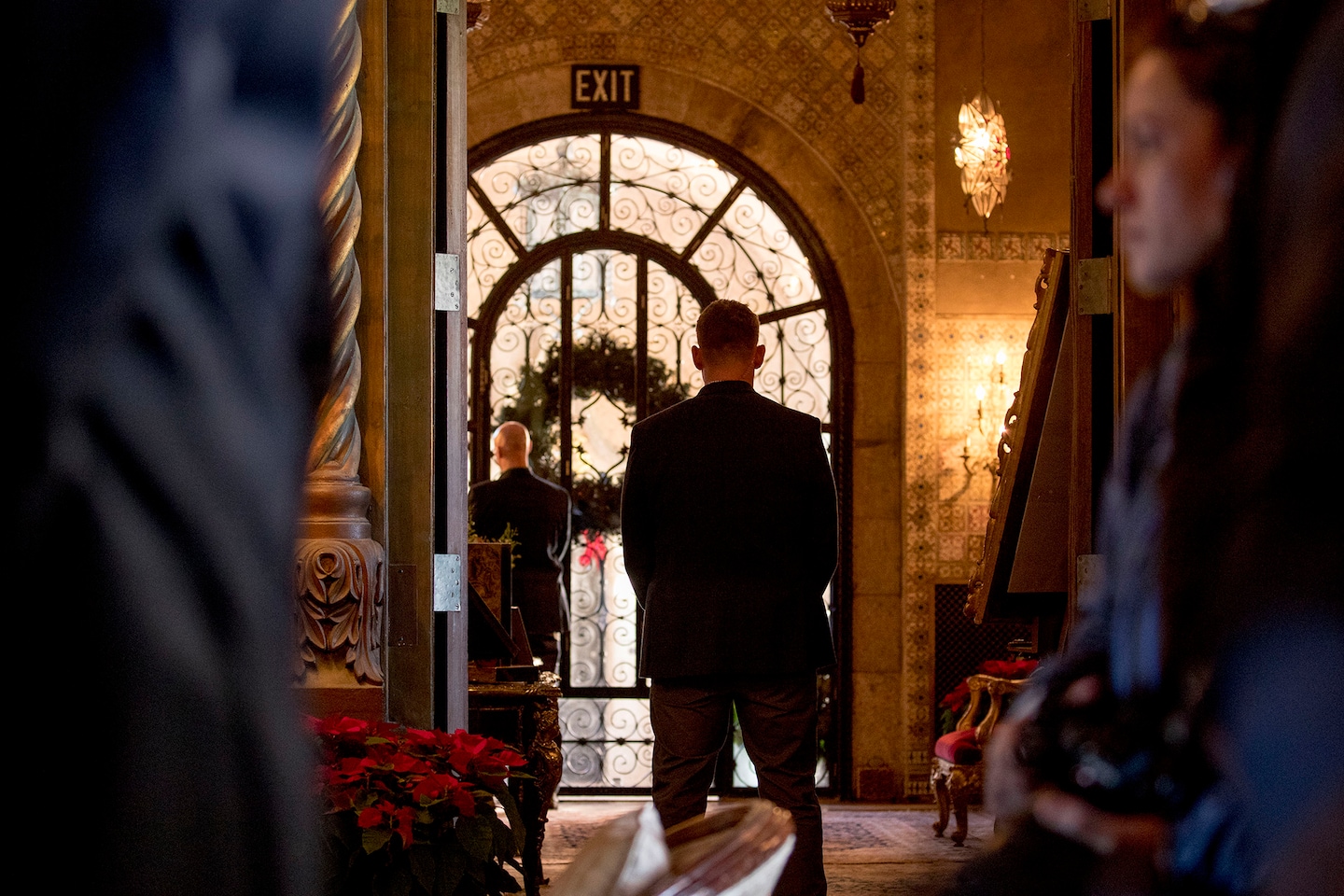 The next time, the Secret Service didn’t take the same risk. It paid Mar-a-Lago to book rooms for two weeks at a time — locking them up before the club could rent them to others, according to newly released records and emails.

For Trump’s club, it appeared, saying no to the Secret Service had made it a better customer. The agency was paying for rooms on nights when Trump wasn’t even visiting — to be ready just in case Trump decided to go, one former Trump administration official said.

Trump has now visited his own properties 271 times as president, according to a Washington Post tally — including a visit Thursday, when he met with GOP donors at his D.C. hotel.

Through these trips, Trump has brought the Trump Organization a stream of private revenue from federal agencies and GOP campaign groups. Federal spending records show that taxpayers have paid Trump’s businesses more than $900,000 since he took office. At least $570,000 came as a result of the president’s travel, according to a Post analysis.

Now, new federal spending documents obtained by The Post via a public-records lawsuit give more detail about how the Trump Organization charged the Secret Service — a kind of captive customer, required to follow Trump everywhere. In addition to the rentals at Mar-a-Lago, the documents show that the Trump Organization charged daily “resort fees” to Secret Service agents guarding Vice President Pence in Las Vegas and in another instance asked agents to pay a $1,300 “furniture removal charge” during a presidential visit to a Trump resort in Scotland.

In addition, campaign finance records have provided new details about the payments the Trump Organization received from GOP groups, as a result of the 37 instances in which Trump headlined a political event at one of his properties. Those visits have brought the company at least $3.8 million in fees, according to a Post analysis of campaign spending records.

Since taking office, Trump has taken other actions that have shattered his early promise to “completely isolate” himself from the Trump Organization.

But the most frequent way Trump is known to have helped his properties has been just to visit them, with the vast, big-spending presidential entourage in tow.

Instead, Bookbinder said, “his businesses have been a constant presence in his presidency. No. The idea that he was going to isolate himself completely — it’s been quite the opposite.”

The Trump Organization provided a statement saying that it has complied with promises it made before Trump took office. The company said it has rejected all new foreign deals and donated any profits from doing business with foreign governments.

“Over the past three and a half years, we have gone to tremendous lengths to avoid even the appearance of a conflict of interest, not due to any legal requirement, but because of the respect we have towards the office of the Presidency,” Eric Trump, the president’s son, said in a statement.

Eric Trump did not directly address questions about the Trump Organization’s charges to the U.S. government.

President Trump chose to keep ownership of his business while in office. He could. The president is largely exempt from government conflict-of-interest rules. But still — to address worries about distraction and the appearance of a conflict of interest — Trump made two sets of promises.

One set governed the Trump Organization, to keep Trump’s business away from his presidency.

The company, now led by Trump’s two adult sons, said it would exclude the president from decision-making, refuse any new overseas deals and give back any profits it made from doing business with foreign governments.

The other set governed Trump personally: He said he would keep his presidency far away from his business.

“President-elect Trump wants there to be no doubt in the minds of the American public that he is completely isolating himself from his business interests,” Sheri Dillon, a Trump attorney, said at a news conference Trump called in January 2017. “He instructed us to take all steps realistically possible to make it clear that he is not exploiting the office of the presidency for his personal benefit.” (Dillon did not respond to requests for comment for this report.)

On the campaign trail in 2016, Trump had offered one simple way to underline his separation from his properties: He just wouldn’t visit.

“I may never see these places again,” Trump said during a rally in August 2016. “Because I’m going to be working for you. I’m not going to have time to go play golf. Believe me.”

In response to questions for this report, White House spokesman Judd Deere said in a statement that Trump has “turned over the day-to-day responsibilities of running the company though he was not required to, [and] has sacrificed billions of dollars” because of discarded deals.

Deere did not directly address questions related to the second set of promises Trump made before taking office — the promises that he would not use his presidency to help the Trump Organization.

“The Washington Post is blatantly interfering with the business relationships of the Trump Organization, and it must stop,” Deere wrote in his statement. “Please be advised that we are building up a very large ‘dossier’ on the many false David Fahrenthold and others stories as they are a disgrace to journalism and the American people.”

The full amount paid by the U.S. government to Trump’s properties is unknown. Neither the Trump Organization nor the White House would provide a figure, and many of the records showing these transactions have not been released.

To sketch out how Trump complied with his promises, The Post interviewed staff members at Trump properties and former Trump administration officials, and reviewed thousands of pages of federal spending records obtained via public-records requests. Most recently, The Post received 265 pages of receipts and emails that the Secret Service released this month, in response to The Post’s lawsuit, and that provided new details about previously identified payments to Trump properties.

These show that Trump’s pledge to isolate himself did not survive his first two weeks in office. On his 15th day as president, he went to Mar-a-Lago. And the end of his literal isolation also ended his financial isolation: Trump’s visit brought the club a new, deep-pocketed customer.

“His knee-jerk, every single time, was to do things at his own properties,” said the former Trump administration official. “He never really understood that you couldn’t do it. In his mind, he could never understand that you should do it somewhere else.” Like other officials interviewed for this report, the former official spoke on the condition of anonymity to describe internal matters.

The newly obtained federal records showed other instances in which the Trump Organization charged the government rates far above what Eric Trump claimed.

In early 2017, for instance, Pence visited Las Vegas to speak to a Republican Jewish Coalition gathering. He stayed one night at the Trump International Hotel in Las Vegas, newly released receipts show. The Secret Service was charged for 151 rooms, at about $102 per room per night — the maximum rate for Las Vegas at the time under normal federal per-diem rules. Secret Service agents are allowed to exceed the limit while on protective duty.

In Las Vegas, the Trump hotel also tacked on $29 per room in “resort fees,” receipts show. That added $4,379 to the bill, for a total of $20,183. The hotel’s website said the fee covered services such as coffee, shoe shines and shuttle service to the shopping mall at the Caesars Palace casino. The Trump Organization did not say why it had charged resort fees to working Secret Service agents.

Another extra charge: When President Trump spent two nights at his Turnberry resort in Scotland in 2018, the Secret Service needed furniture removed from rooms. Records show that Trump’s club levied a “furniture removal charge” of $1,300 plus tax.

In September 2017, for instance, Donald Trump Jr. stayed at the Trump hotel near the White House while in Washington to testify before a Senate committee investigating Russian interference in the 2016 presidential campaign. His Secret Service detail reported paying the hotel $3,300 for rooms over two days, according to the newly released receipts. It is unclear what nightly room rate the agents were charged — the Secret Service redacted that information before releasing the receipts.

Trump Jr. did not respond to requests for comment.

“The Secret Service is always there,” said one former employee at the Trump hotel in Washington. With all the visits by the president, his children and top officials, the former employee said, “it’s like being in the White House — that’s how I felt working there.” The former employee spoke on the condition of anonymity to preserve relationships at the hotel.

Another former Trump administration official said that Trump’s logic for these trips was one that turned his initial promise — to steer clear of his business interests — on its head. As Trump saw it, the official said, people didn’t expect him to stay away.

They expected him to visit.

“The president argued repeatedly that the people knew who they elected when they picked him and that his businesses were central to his image,” the official said.

Trump’s visits as president also brought payments from Republican political groups, which have held fundraisers at his properties, with Trump himself as the headliner. This summer, four such events have been held, three at Trump’s Bedminster club and another at the Trump International Hotel in Washington. The costs of those events have not yet been released.

Trump visited his D.C. hotel Thursday to meet with donors and supporters. The hotel has been a hub of activity all week, with panels and private events led by senior Trump administration officials ahead of his Republican National Convention speech. Some Trump family members, officials and allies have spent time in a private suite there before and after their speeches. Thursday’s event was arranged by Trump Victory, a joint fundraising committee for the Trump campaign and the Republican National Committee, officials said.

Trump has also used his taxpayer-funded trips to help customers that hold charity galas or wedding receptions in his business’s ballrooms.

The revenue he has reaped from these visits is harder to measure. Wedding-reception bills, for instance, are not subject to public-records requests. But Trump’s attention to these events underscores how he has discarded his promise to separate his business and his White House.

“I’m standing at the White House. Right over my shoulder is the Oval Office,” Trump said in a video he filmed in 2019 for the Palm Beach Police Foundation, one of Mar-a-Lago’s most loyal and lucrative charity customers. That year, permits show, the foundation’s event at Mar-a-Lago was supposed to attract 450 people and cost $250,000.

It was an unusual thing — a sitting president, taping a White House message meant only for private clients of his company.

“So many of my friends are with you tonight. They’re in that beautiful ballroom,” Trump said. “Have an incredible evening. I’ll be there next year.”

This January, when the police foundation held another gala in Mar-a-Lago’s huge ballroom, Trump was there in person.