Republicans make the courts a feature of their convention; Democrats do not, and liberals are worried 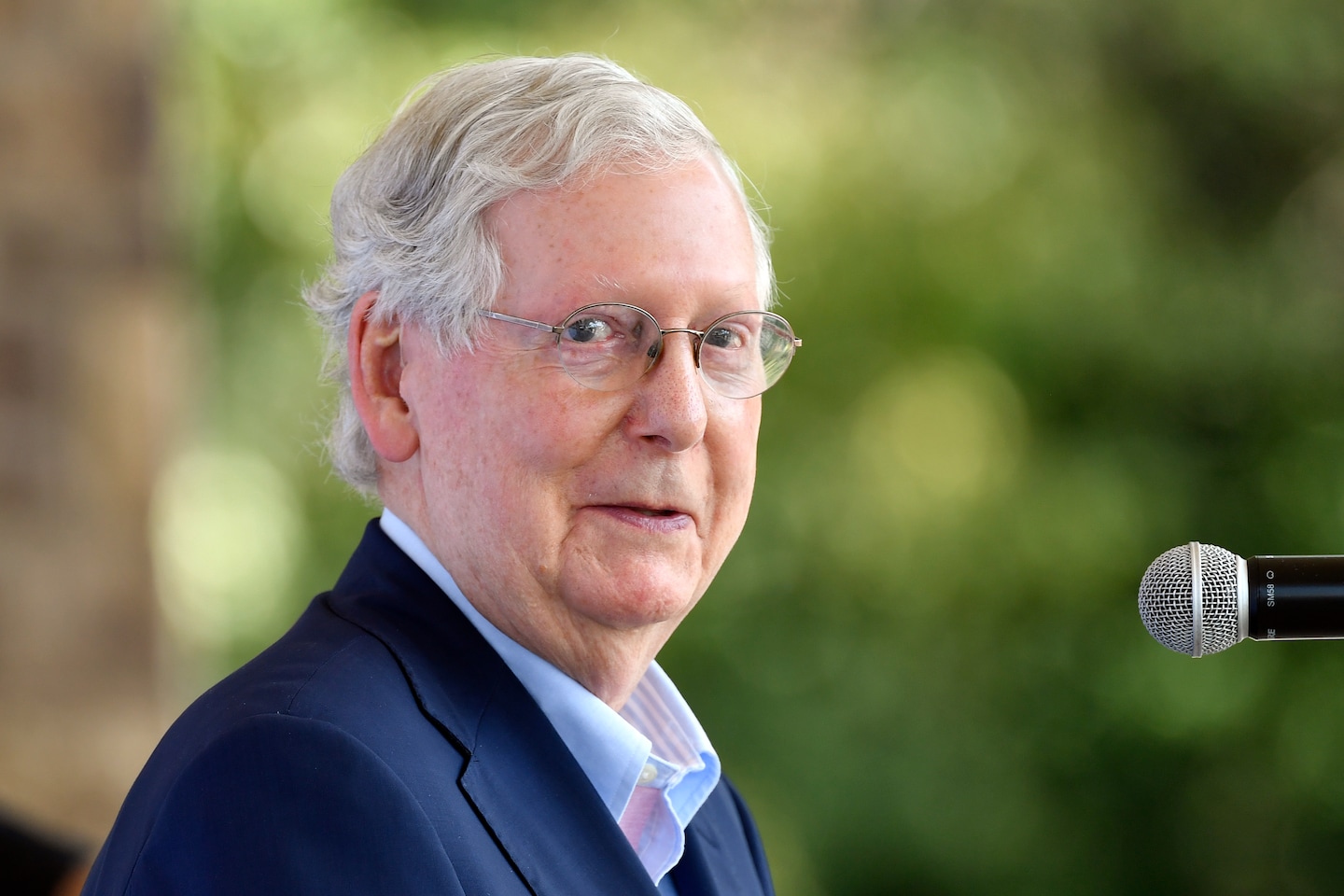 And Trump used his convention address to brag about the number of federal judges — a figure he inflated — that he expects to have confirmed by the end of his term.

References to the judiciary, long a key motivator for conservative voters, were woven throughout the GOP convention and served as a reminder that even if Trump loses reelection in November, his stamp on the courts will last for decades to come.

But Democrats all but ignored the Supreme Court in their four-day convention earlier this month, even after the party spent Trump’s first term reckoning with the consequences of Republicans confirming two justices, including a reliably conservative justice who replaced the court’s swing vote.

The contrast worries liberal activists who see it as further evidence that the Democratic Party isn’t paying enough attention to an area where conservatives have made big inroads in recent years: control of the courts.

“The fact that Democrats spent so little to no time discussing the federal bench failed to take into account that their critically important goals for the future will be challenged in the courts,” said Nan Aron, the president of the liberal judicial advocacy group Alliance for Justice.

She added: “It’s a major misstep, given the fact that these 200 judges will make it very difficult, if not impossible in many cases, for the Democrats to accomplish their worthy goals going forward.”

For activists on both sides, the stakes for the future of the Supreme Court are incredibly high, with two justices in their 80s — including Ruth Bader Ginsburg, who announced last month that her cancer had returned.

The lack of attention on the courts at the Democratic convention came even as a notable shift has occurred in recent years when it comes to how much the party’s voters prioritize the judiciary.

A Pew Research Center poll released this month found that 66 percent of registered voters who support Democratic nominee Joe Biden said the matter of Supreme Court appointments was “very important” in considering their vote for president, compared to 61 percent of Trump backers. When Pew asked that same question four years ago, 70 percent of then-candidate Trump’s supporters said the issue was “very important,” while 62 percent of backers of Democrat Hillary Clinton said the same.

Yet the sole Democratic speaker to discuss the courts with any notable prominence was Senate Minority Leader Charles E. Schumer (D-N.Y.), who vowed to “restore a Supreme Court that looks out for people, not corporations” should Democrats win the White House and flip control of the Senate.

Former acting attorney general Sally Yates decried Trump’s attacks on institutions such as the FBI and federal judges that are designed to be a check on presidential power. But Sen. Catherine Cortez Masto (D-Nev.), the chair of the Senate Democrats’ campaign arm, did not mention the courts, even as Democratic senators spent four years vigorously fighting dozens of Trump judicial nominees.

And the appearance of Sara Gideon, the Democratic Senate nominee in Maine, was spent introducing a musical performance, even though she is running against Sen. Susan Collins (R), whose support for now-Supreme Court Justice Brett M. Kavanaugh has made her a top target for defeat this November.

“As both 2016 and 2018 reconfirmed, the judicial fight is a winning issue for Republicans,” said Mike Davis, the former top nominations counsel for Republicans on the Senate Judiciary Committee. He now runs the Article III Project, a group that promotes Trump’s judicial picks. “It unites the party, wins over independents and even brings in right-thinking Democrats.”

Instead, the Democratic Party’s changing views on the courts — and the increasing influence on voters — was reflected in its platform. In it, the party acknowledged “it recognizes the need for structural court reforms to increase transparency and accountability.” While the platform didn’t endorse any specific changes, the inclusion of the language was nonetheless considered a victory for liberal activists who had pushed Democratic presidential candidates to embrace an overhaul of the courts.

Democrats in the platform also vowed to tap judicial nominees with “diverse backgrounds and experiences, including as public defenders, legal aid attorneys, and civil rights lawyers.”

“We’re definitely moving the dial with actual Democrats,” said Christopher Kang, a veteran of the judicial wars in the Obama White House.

Kang, a co-founder and chief counsel for the judicial advocacy group Demand Justice, said he would have been frustrated by the minimal mention of the courts at the Democratic National Convention had there not been an ongoing public health crisis surrounding the novel coronavirus.

“Given the pandemic and seeing how Democrats wove Trump’s response to covid, as well as the Democratic response and the need to come together, the courts didn’t really fit as you would’ve thought in a more policy- and substance-focused convention,” he said.

The Democratic National Committee had no comment on why the judiciary went so unmentioned during its convention. The Biden campaign did not return a request for comment.

In contrast, references to the courts were sprinkled throughout the Republican National Convention.

In a video played the opening night of the convention, Trump vowed that he would appoint justices “who will uphold our laws and our Constitution.” Jason Joyce, a lobsterman from Maine, talked about Trump nominating judges “who respect the Constitution and the right to life.”

Cissie Graham Lynch, the granddaughter of famed evangelical leader Billy Graham, said Trump nominated judges “who respect the First Amendment” and that while in court, “he ensured religious ministries would not be forced to violate their beliefs.”

Eric Trump, the president’s second-eldest son, listed Supreme Court justices as a promise kept by his father. And antiabortion activist Abby Johnson cited Trump’s “record number of pro-life judges” as she made her case for the president among abortion opponents.

Republicans also invited as speaker Rebecca Friedrichs, whose lawsuit against teachers unions in California positioned her to battle not only the Obama-Biden administration but then-California Attorney General Kamala D. Harris, now the party’s vice-presidential nominee.

In their respective convention addresses, Vice President Pence said the administration has appointed “more than 200 conservative judges to our federal courts,” while Trump one night later said that by the end of his term, “we will have approved more than 300 federal judges, including two great new Supreme Court justices.”

So far during the Trump presidency, the Republican-controlled Senate has confirmed 203 judges. There are 70 vacancies in the federal district courts, with nominees pending for 41 of them.

“We will appoint prosecutors, judges and justices who believe in enforcing the law, not enforcing their own political agenda,” Trump said from the South Lawn of the White House in his convention speech.

After a season in which several contenders in the Democratic presidential primaries endorsed structural changes to the Supreme Court such as expanding the number of seats or imposing term limits, Senate Majority Leader Mitch McConnell (R-Ky.) in his convention appearance Thursday night warned that Democrats “want to pack the Supreme Court with liberals intent on eroding our constitutional rights.”

“The stakes have never been higher,” McConnell said. “Which is why I’m asking you to support Republican Senate candidates across the country and reelect my friend President Donald Trump.”

Conventions aside, the issue of the courts is sure to be an active campaign topic in the coming weeks.

Biden has pledged to nominate a Black woman to a Supreme Court vacancy should he be elected, and advocacy groups are preparing to ramp up publicity and voter engagement efforts around the promise.

Meanwhile, Trump said in a June tweet that he would release a fresh batch of potential Supreme Court nominees — some on the existing list, some not — by Sept. 1, and two people familiar with the plans said the White House was prepared to do so in the coming days.

Administration officials have reached out to key allies to craft their new list of nominees, including Sen. Charles E. Grassley (R-Iowa), the former chairman of the Senate Judiciary Committee, who has spoken with the White House several times in recent weeks to solicit his input, Grassley spokesman Taylor Foy said.

But even Grassley was rankled this past week when the Trump campaign released a list that included dozens of policy priorities for his second term but not any mention of the judiciary.

“Why isn’t filling judicial vacancies in 2nd term agenda released 2day?” Grassley, known for his clipped and misspelled social media missives, tweeted at the president this past week. “Senate GOP & Trump hv made top priority Talking abt the Supreme Court got Pres Trump elected & it needs 2b center stage again this election ‘Lv no vacancy behind’ needs 4 MORE YRS.”

Foy said Friday that “given the president’s comments last night, he’s satisfied that voters know judges will continue to be a top priority.”