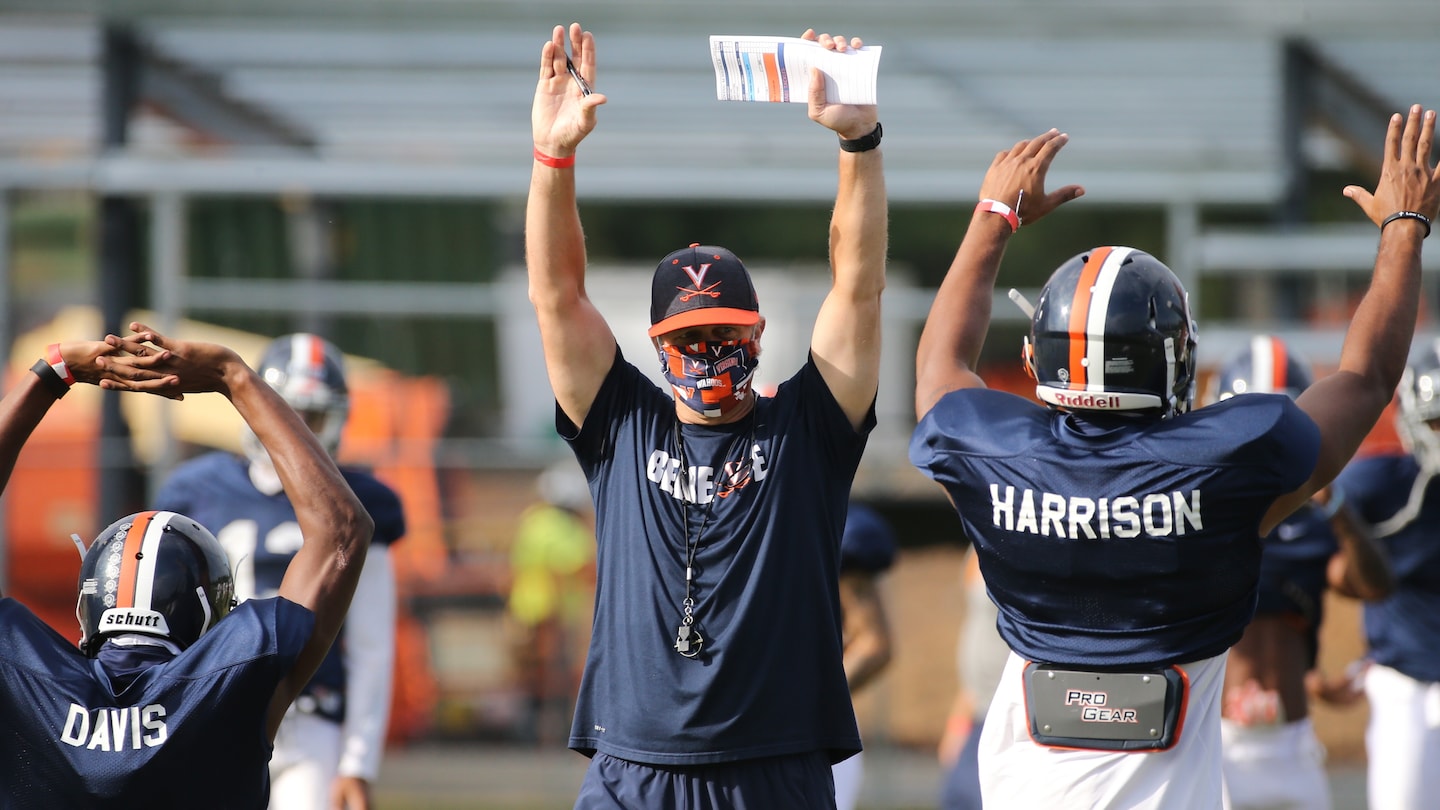 “That’s something that we’ve been talking about recently,” senior linebacker Zane Zandier said. “Limiting the amount of interaction you have with people is kind of the goal, which is tough because we’re socially starved at 20- to 22-year-old kids that are looking for a college experience. I think we kind of accepted when we got here that’s just not the way it was going to be. You have to limit it to hanging out with dudes on the team.”

Back on the field, safety guidelines have become as much of a priority for Coach Bronco Mendenhall as installing plays or getting quarterback Brennan Armstrong ready to make the first start of his career when the season is scheduled to open Sept. 19 at archrival Virginia Tech.

During practices, Mendenhall ensures players maintain proper distance from one another whenever possible. He and his assistants wear face coverings, and players wear specially designed helmets with visors and splash shields. The visors and splash shields are in place to help prevent spread of a virus that has killed at least 179,000 in the United States, according to data compiled by The Washington Post.

“We’re wearing the entire full faceshields, and I’ve seen clips from other practices where programs are choosing not to do that, which is mind-boggling to me,” Mendenhall said. “So we’re wearing the visors and the bottoms. The minute the helmet comes off, the mask comes up. It’s like one motion.”

Off the field, the players police themselves, with the seniors, including captains Richard Burney, Charles Snowden and Terrell Jana, setting the example for social distancing and avoiding large gatherings. The added layer of temptation with other students returning comes with the season on uncertain footing following the Big Ten and Pac-12 announcing they would not hold fall sports, leaving the ACC, Big 12 and SEC as the Power Five conferences planning to play football.

“I definitely think there’s a level of concern with all that,” senior tackle Dillon Reinkensmeyer said. “But I think the only thing we really can control is ourselves, and that’s what we have to focus on. I really hope the students [wear masks] when they come back and they follow the guidelines.”

Among the 10 sports programs operating on campus in Charlottesville, no positive tests have been reported in more than a month. But the football players can look to LSU for a cautionary tale: The reigning national champions reportedly are down to four offensive linemen following a rash of positive tests that led to quarantining within the position group.

“There’s just so much uncertainty, and it seems like it changes every single day,” Zandier said. “It’s just really hard to put anything permanently that we’ll definitely get through the entire season, but we’re doing everything that we can just day by day.”