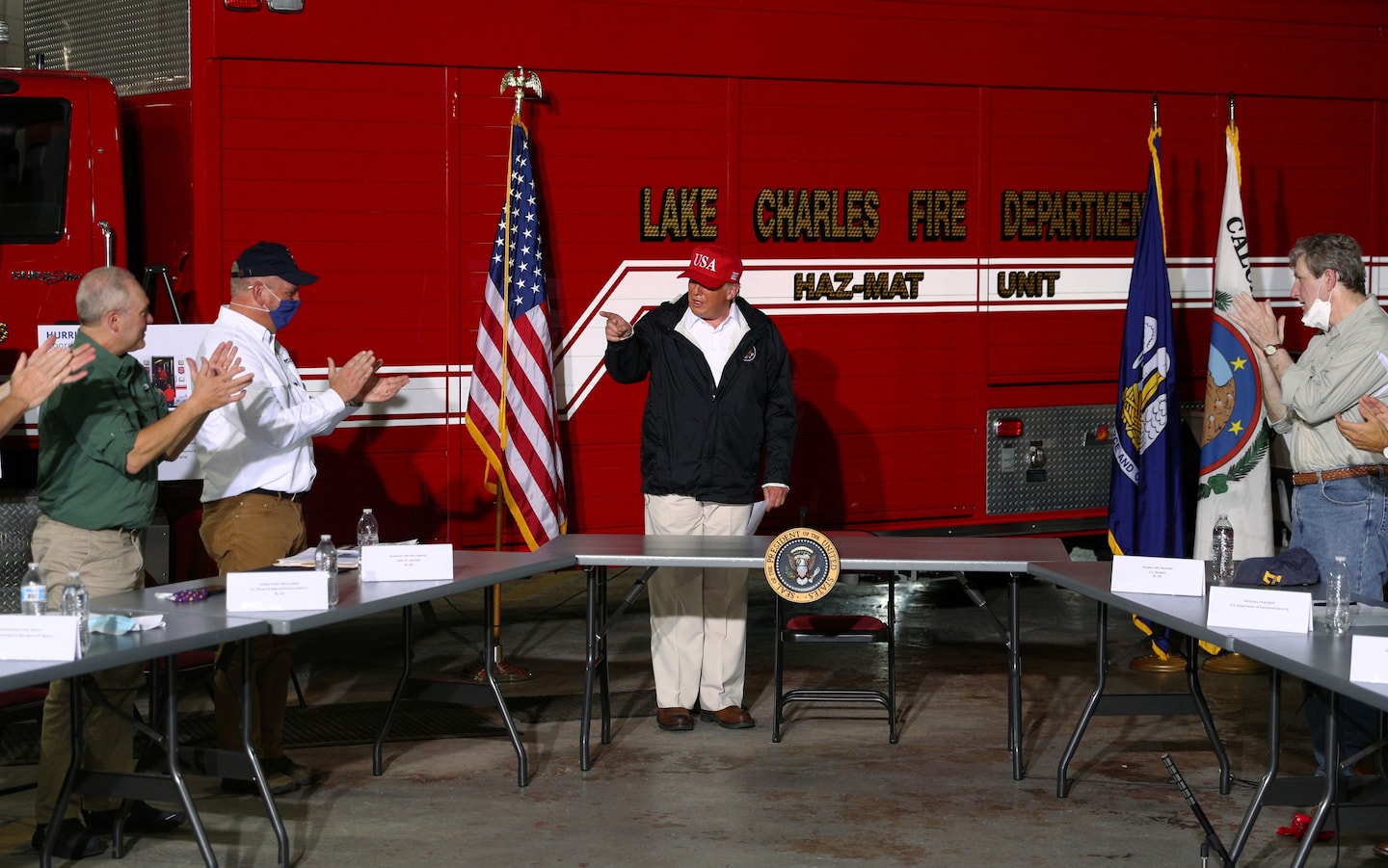 Coastal communities in Louisiana and Texas were battered in recent days by the storm that cut through the area, destroying some homes and businesses, leaving hundreds of thousands of people without power and killing at least 16 people, according to a tally by the Associated Press. Hurricane Laura made landfall early Thursday as a Category 4 storm, one of the most powerful hurricanes to strike the Gulf Coast in decades.

Trump toured damage in Louisiana alongside local officials, including Gov. John Bel Edwards (D) and Republicans from the state’s congressional delegation, before heading to Orange, Tex., just across the border, where he was greeted by Gov. Greg Abbott (R).

“I’m here to support the great people of Louisiana. It’s been a great state for me,” Trump said.

The trip comes after two weeks of political conventions. During theirs, Democrats portrayed Trump as a president who only cares about his own fortunes and lacks the ability to empathize with citizens struggling amid the coronavirus pandemic and other hardships. Republicans used their convention last week to try to counter that image, presenting Trump as a strong leader who can provide a comforting presence.

“Our hearts go out to families who lost loved ones,” Trump said during a briefing here.

Trump mostly kept to listening to and interacting with local leaders, while avoiding the type of overt political attacks he often makes during public appearances, including one the night before in New Hampshire.

Trump crammed in five events in two states despite being on the ground for about four hours, a whirlwind tour that did not appear to include many ordinary residents. He visited a warehouse distribution center here, observed National Guard members clearing downed trees in a neighborhood, held a roundtable briefing with federal and local officials in a firehouse and gave a short pep talk to dozens of Guard members at a nearby stadium — making sure to pose for news photos with them while giving two thumbs up.

Trump several times marveled at the size of the storm.

“Katrina seems to be the standard,” he said, referring to the 2005 hurricane that devastated parts of the state. “You come from Louisiana or Fifth Avenue, New York, you know about Katrina.”

Edwards emphasized that Hurricane Laura was punishing in a different way than Katrina, noting that most of the damage from the 2005 storm came after levees in New Orleans were breached. By comparison, he said, Laura hit head-on.

Trump, dressed in a black windbreaker and a red “USA” baseball cap emblazoned with “TRUMP” and “45,” appeared to be in good spirits. He joked with officials in Louisiana and passed out ceremonial pens and appeared to sign autographs for some of the local officials and first responders, joking that they could sell them for $10,000 on eBay.

“If I put your name down, it loses a lot of value, so just sell it tonight on eBay,” he said.

In one sign of concern about the president’s exposure to the novel coronavirus, White House Chief of Staff Mark Meadows and White House Presidential Personnel Office chief Johnny McEntee asked attendees not to get too close to the president while he signed pieces of paper for them. Sen. John Neely Kennedy (R-La.) reminded those approaching the president to put on a mask.

Trump then flew on Marine One to Orange, Tex., for another briefing. He thanked first responders there and said they “don’t get respect they should get, but actually they do because people love them.”

As he sought to demonstrate support for local residents, many returned the favor. In Orange, Trump was met by hundreds of supporters, some holding campaign signs as the president’s motorcade passed by.

Along with Abbott, Trump was joined at the briefing by Republican Texas Sens. John Cornyn and Ted Cruz, along with other local officials.

Trump was asked at the end of a roundtable event in Orange how he balances his support for the energy sector in the region with the threats posed to the area by hurricanes that scientists say are intensifying because of a warming climate. Trump has expressed skepticism about climate change despite scientific consensus on the issue.

Colby Itkowitz in Washington contributed to this report.