Just when we need a drink, the U.S. wine industry faces an existential threat

Tim Carl, a freelance journalist and photographer, is a Napa Valley native and former winery owner.

Ash and smoke filled the air as winemaker Whitney Fisher assessed the damage at her family’s winery in Sonoma County, Calif. It was the first day of the official fire season, Oct. 1, and the surrounding hillsides and some grapevines smoldered, yet the house and winery remained. The fight wasn’t over: A hot, dry wind began to blow as she checked her phone for the latest alert, glancing up occasionally to monitor whether any falling cinders had ignited the bone-dry hillside brush that remained. It would be another long night.

It remains unclear how, exactly, on Sept. 27 at 3:48 a.m., a small fire began in the hills just northeast of St. Helena, Calif., a bucolic town in the heart of Napa County. Driven by triple-digit temperatures and high winds, flames from the Glass Fire spread quickly, fanning out over the drought-weary landscape and slipping down toward the valley floor, singeing vineyards as they made their way toward Sonoma County. As of Thursday, the fire had burned more than 67,000 acres — contributing to California’s record 4 million acres burned this year. The Glass Fire alone has destroyed more than 600 homes and damaged or destroyed some two dozen wineries, and affected an untold number of businesses and lives. 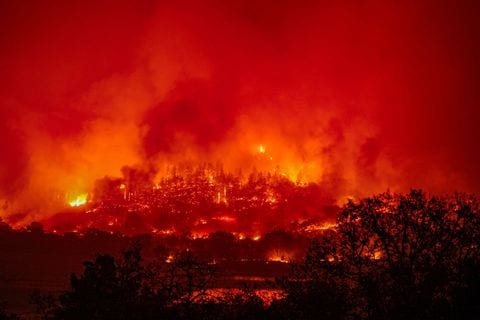 In the aftermath of the deadly 2017 Tubbs Fire, which ravaged Napa and Sonoma counties, grape growers and winemakers rallied. It was a bad year, many thought, but one season of damage and depressed production could be endured. Yet the next year brought the Mendocino Complex Fire, one of the largest in the state’s history. The year after that the Kincade Fire swept through. Of the 10 biggest fires to hit the region since 1950, seven have struck since 2015. This year the area is facing more of the same.

A few years ago, wildfires were a tragedy for a handful of growers and vintners. Now, they are an existential threat to the entire wine industry.

Almost every aspect of wine production is touched by these disasters. Sensitive multimillion-dollar equipment is destroyed. The normally pristine and meticulously maintained environs of most wineries are compromised. Barrels that have been aging for years are incinerated. Power outages make it impossible for winemakers to keep their tanks cool enough to avoid ruinous runaway fermentations. 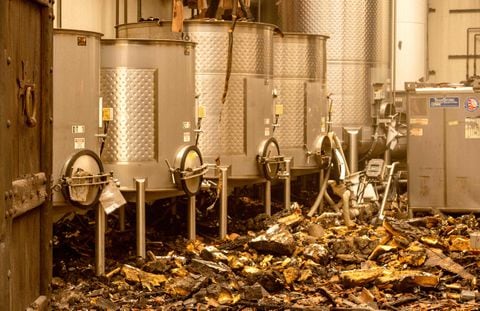 The burned remains of the Castello Di Amorosa winery are seen as the Glass Fire continues to burn in Calistoga, Calif., on Oct. 1. (Josh Edelson/AFP/Getty Images)

The fruit itself is especially vulnerable. Each vine damaged can take three to five years to become fully productive again. And unlike nearly all other agricultural endeavors, winemaking comes down to a crop that ripens once a year and then ages for several months or years before being sold. Losing a single vintage can have disastrous long-term consequences for precarious businesses.

Even if equipment and vines are spared from the flames, the smoke from wildfires can be nearly as devastating. If grapes have not been harvested, the smoke and soot from even a relatively distant wildfire can adhere to waxy grape skins, where they can be absorbed and metabolized into aromatic compounds that can make a wine taste and smell like an ashtray. Sometimes smoke taint is difficult to detect, showing up well after grapes have been harvested, during the wine’s aging process. There are a few “treatments” to remove such smoke taint from wine, but often the results are unreliable. 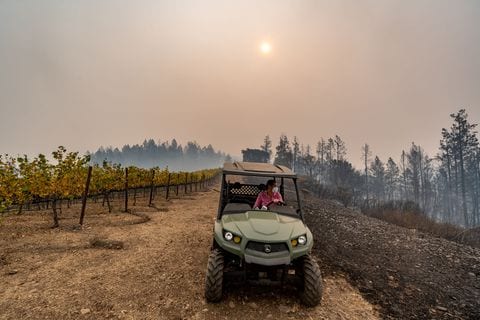 Whitney Fisher surveys the damage to her family’s winery on Oct. 2. (Tim Carl)

Even the possibility of smoke damage carries costs. Winemakers can reject grapes from a grower if they detect smoke taint at harvest time, but with hundreds or thousands of daily samples to process, the labs that test for this damage have become overwhelmed. A winery could just accept the grapes, make the wine, treat it and hope the offending taint doesn’t appear later. But if it does, few insurance companies will then pay out a claim on wine that might never make it to market. And even as insurers deny winemakers’ fire-related claims, the prevalence and high cost of these fires have caused insurance premiums to rise. 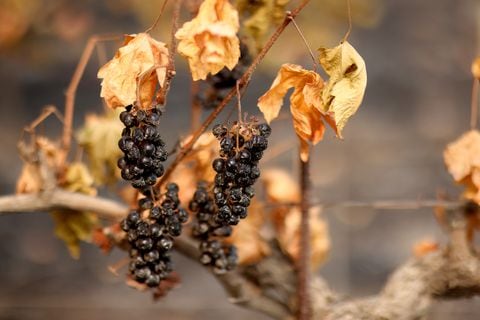 Wineries’ ancillary income, too, is affected. In the Napa Valley alone, 3.85 million visitors in 2018 spent $2.23 billion, according to Visit Napa Valley. Many, if not most, of those visitors came during late summer and fall to witness the harvest. But this period overlaps almost exactly with fire season, which has been keeping tourists away.

In this year’s Glass Fire, two of the valley’s most popular tourist-destination wineries — the $40 million re-created 13th-century Tuscan Castello di Amorosa and the iconic Sterling Vineyard — suffered significant damage to their outbuildings and equipment. In the wine storage room at Amorosa, thousands of bottles exploded, their precious contents vaporized by the flames. The winery at Burgess Cellars burned to the ground, as did several others.

Damaged wine barrels at Fairwinds Estate Winery, which was destroyed by the Glass Fire.

The remains of a golf cart burned by the Glass Fire sit next to a vineyard at Calistoga Ranch in Napa Valley.

TOP: Damaged wine barrels at Fairwinds Estate Winery, which was destroyed by the Glass Fire. BOTTOM LEFT: The remains of a golf cart burned by the Glass Fire sit next to a vineyard at Calistoga Ranch in Napa Valley. BOTTOM RIGHT: Melted and burned wine bottles at Castello Di Amorosa winery.

The greatest cost for the Napa and Sonoma region, however, may be the human one. California’s wine production would be impossible without the thousands of workers who cultivate and harvest the grapes and then help turn them into wine. For them, the fires pose additional challenges. As thousands of homes in the area are destroyed, an already constricted housing market tightens further. Left with few options, many workers are forced to live far outside the area and commute hours each way — or live in overcrowded conditions, which this year has exacerbated the spread of the coronavirus. Even the many laborers who risk working in the hazardous, suffocating conditions find that evacuations and uncertain work schedules eventually force them to look for jobs in more stable environments, which, thanks to the pandemic, can now be hard to find. 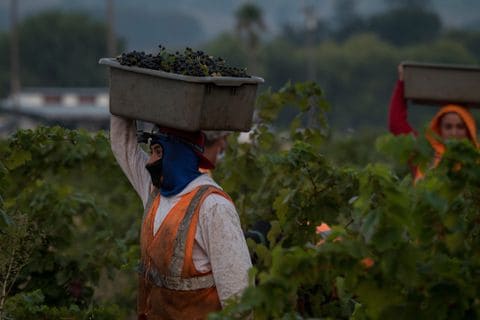 This trend has only made the problems facing the industry worse. As workers leave, they can be difficult to replace: Their skills take time and training to develop; immigration sweeps suppress the labor supply; mechanical harvesting, while on the rise, doesn’t work for every vineyard topography or style of wine. Worker shortages have driven up labor costs, cutting further into thin margins, or simply left some vineyards without hands to harvest their product.

All of these concerns have left many in the wine industry at their wits’ end, wondering how they can continue to keep their businesses afloat. Especially for smaller, independent operations, the difficulties caused by fires are eliminating pretax profits that were often modest to begin with, or forcing them to sell or take on debt to make ends meet, hoping beyond hope that next year will be wildfire-free. 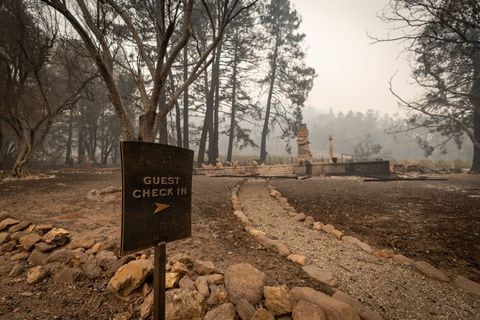 Remains of the Hourglass Winery in St. Helena on Oct. 2. (Tim Carl)

Meanwhile, between the fires and the covid-19 pandemic, the 2020 vintage will go down as the most challenging and frustrating in California’s history. Before the fires, the quality of this year’s output was looking to be one of the finest in decades: Because of a warm, dry spring and hot weather in early August, the grapes had developed complex flavor profiles. For those who did pick grapes prior to smoke exposure and processed them at a winery with consistent power supply, the wines are likely to be exceptional. But this is small consolation for those winemakers who will have nothing to sell. While the numbers are not yet in, some grape growers are grumbling that half of this year’s crop — perhaps more — has been lost. With quality high and supply low, lovers of California wines across the country and around the world can brace for shortages and high prices. 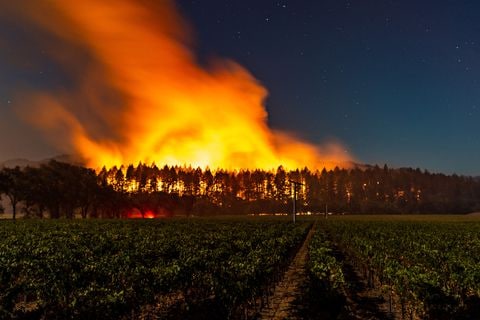 This might be the new normal. And it’s not as though things were peachy in the world of wine to begin with: Demand has been slowing as younger consumers shed their parents’ infatuation with all things wine, and as wine has been used as a pawn in an ill-conceived trade war with both China and Europe. Then came a pandemic and yet another year of disastrous fires.

What is left is a collection of weary survivors trying to plan for an uncertain future. “There’s definitely resolve and a ton of camaraderie here,” says Fisher. “But there’s also a real fatigue.”

All that we here in Northern California wine country can do now is wait for the smoke to clear — even if just enough to see what lies ahead for California’s deeply troubled wine industry.

Natalie Hanson: Terror is California’s new normal. How long can we hold out?

Philip Higuera, Elizabeth Dodson, Alexander Metcalf and Solomon Dobrowski: There will be more wildfires. What should we do?

The Post’s View: We won’t stop California’s wildfires if we don’t talk about climate change

No one gave Ritchie Torres a shot. He’ll soon be the first gay, Afro-Latino member of Congress.

The D.C. Metro may never be the same — unless Congress intervenes

The Trump era could have been even worse

The increase in LGBTQ support for Trump has a silver lining