Dodgers blast off early, close the door late to beat the Braves and force Game 7 in the NLCS 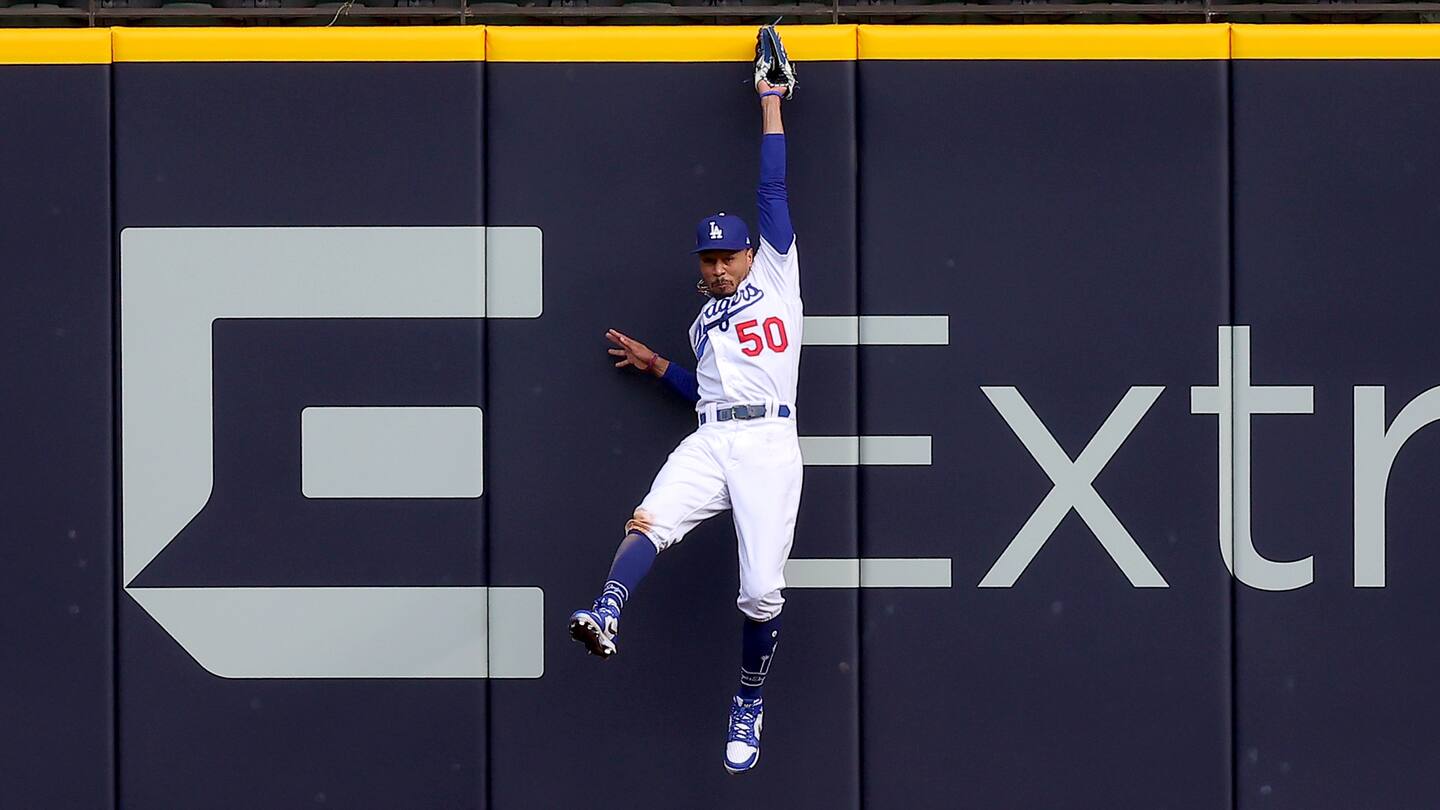 There is little question now that the 2020 edition is the most talented Dodgers team of them all. It is there in the franchise-record winning percentage. And it is there in right field and in the right-handed batter’s box, where Mookie Betts, a player unlike any the Dodgers have suited up during this run of eight straight division titles, alters games on a nightly basis with his glove or his bat or sometimes both.

But now — after beating the Atlanta Braves, 3-1, in Game 6 of the National League Championship Series on Saturday, forcing a winner-take-all Game 7 on Sunday night — the Dodgers have reached the annual inflection point, where one potential outcome inflicts the maximum amount of pain and ensures another long and lonely winter and the other puts them in the World Series starting Tuesday with a chance to validate seven consecutive autumns’ worth of heartbreak.

For a second straight day, the Dodgers arrived at Globe Life Field with their season on the edge of the abyss, and for a second straight day they staved off elimination. And for the second straight day, the outcome hinged largely on an exquisite play in right field by Betts — this time, a sprinting, leaping catch at the wall on Marcell Ozuna’s lined smash to end the fifth inning, saving a critical run. Betts hauled it in, then high-stepped and hooted his way back to the Dodgers’ dugout. Right-hander Walker Buehler, the grateful beneficiary, stood on the mound with his arm raised in triumph.

To come back from being down 3-1 in the series, tie it up with a couple of emotional and hard-fought victories, only to stumble badly in Game 7 — that would be the most Dodgers way of all to lose because it would be the toughest to stomach. They will send right-hander Tony Gonsolin to the mound Sunday — or perhaps an opener and then Gonsolin — to face Braves rookie right-hander Ian Anderson.

But the Dodgers have been saying for weeks that this team is different. And aside from Betts — acquired in a blockbuster trade with Boston in February, then signed to a $365 million contract extension — there is one other compelling reason to believe they might be right: shortstop Corey Seager.

It’s true that Seager has been a cornerstone of the Dodgers since 2015. But he has never exerted his will over a postseason the way he has this month. He homered again Saturday — a first-inning blast off Braves lefty Max Fried, Seager’s fifth of the series, an NLCS record. Only Nelson Cruz, who had six for the Texas Rangers in the 2011 American League Championship Series, has hit more homers in a postseason series.

“It’s the fun part of the year, and we’re excited every day we show up,” Seager said. “It means you’re still playing. You’re winning games and moving on.”

As this postseason began, the Dodgers’ shortstop was saddled with a reputation, well earned, for coming up short in October. He was a career .203 hitter with a .605 on-base-plus-slugging percentage in his first four trips to the playoffs (he was injured and missed 2018), with 41 strikeouts in 31 games — an unsightly track record that lent credence to the perception Seager had never really fulfilled the promise of his 2016 rookie of the year breakthrough. It was widely believed, accurately or not, that the Dodgers had designs on replacing him with Cleveland’s Francisco Lindor as soon as the latter hit free agency.

But Seager is hitting .333 and slugging .857 this postseason, sometimes carrying the Dodgers’ offense. Aside from Betts, he is their most indispensable player.

“It’s just [a matter of] understanding at times they’re going to try to not throw strikes to him because of how good he is,” Roberts said. “He’s been as good in the zone in this postseason as he’s ever been.”

Justin Turner followed Seager’s homer with one of his own — part of a three-run first inning against Fried, the Braves’ ace. Fried, a contender for the NL Cy Young Award, pitched 56 innings in the regular season, faced 224 batters and threw 899 pitches, and he only gave up two home runs. On Saturday, the Dodgers had that many by the third hitter of the game.

The ambush of Fried was swift and thorough enough to prompt the question of whether the Dodgers had detected a “tell” in his delivery — in other words, that Fried was tipping his pitches. That theory was only bolstered when, after having the benefit of time between innings to collect himself and consult with his pitching coach, Fried came back and blanked the Dodgers until he departed in the seventh.

“To come out in a game like this and put us behind the eight-ball real quick — for me that’s unacceptable,” Fried said. “I needed to be better.”

It’s what the Dodgers do: They figure out a pitcher over time until, finally, they get him. They did it earlier in this series with some of the Braves’ relievers — lefty Will Smith comes to mind — looking helpless against them the first time but eventually unlocking the mystery.

The Dodgers’ three-run first only underscored the way this series has been one long sequence of roundhouse punches that have landed with devastating effect. Game 6 was only the second in the series to be decided by fewer than four runs. The Dodgers won Game 3 by a whopping 12 runs — the Braves, in turn, won Game 4 by eight.

And since the play that turned the series in the Dodgers’ favor — Betts’s shoestring catch of a sinking liner in the third inning of Game 5, which became a double play when Ozuna was caught on replay failing to tag up at third base before sprinting home — the Dodgers have outscored the Braves by a 10-2 margin.

Ahead 2-0 in the series and then again 3-1, the Braves considered Fried and Anderson their two-headed firewall against a potential collapse. Entering Saturday, they were 6-0 this postseason in games started by that pair, including wins in Games 1 and 2 of this series.

But now Fried has fallen victim to the Dodgers — outpitched in Game 6 by Buehler, who tossed six innings of scoreless ball in his latest big-game gem — and all the Braves have left is Anderson, who is immensely talented but entered this postseason with just six big league starts to his name.

“We’re in a good spot,” Braves Manager Brian Snitker said. “I like the guy we’re going to pitch.”

Are the Dodgers just setting themselves up for the most painful possible finish to their 2020 season, in keeping with their recent history of gruesome October losses? Will the whole thing fall apart in a familiar way? Mookie Betts, for one, is here to tell you this time it’s different. Corey Seager, for another, is here to say he agrees.