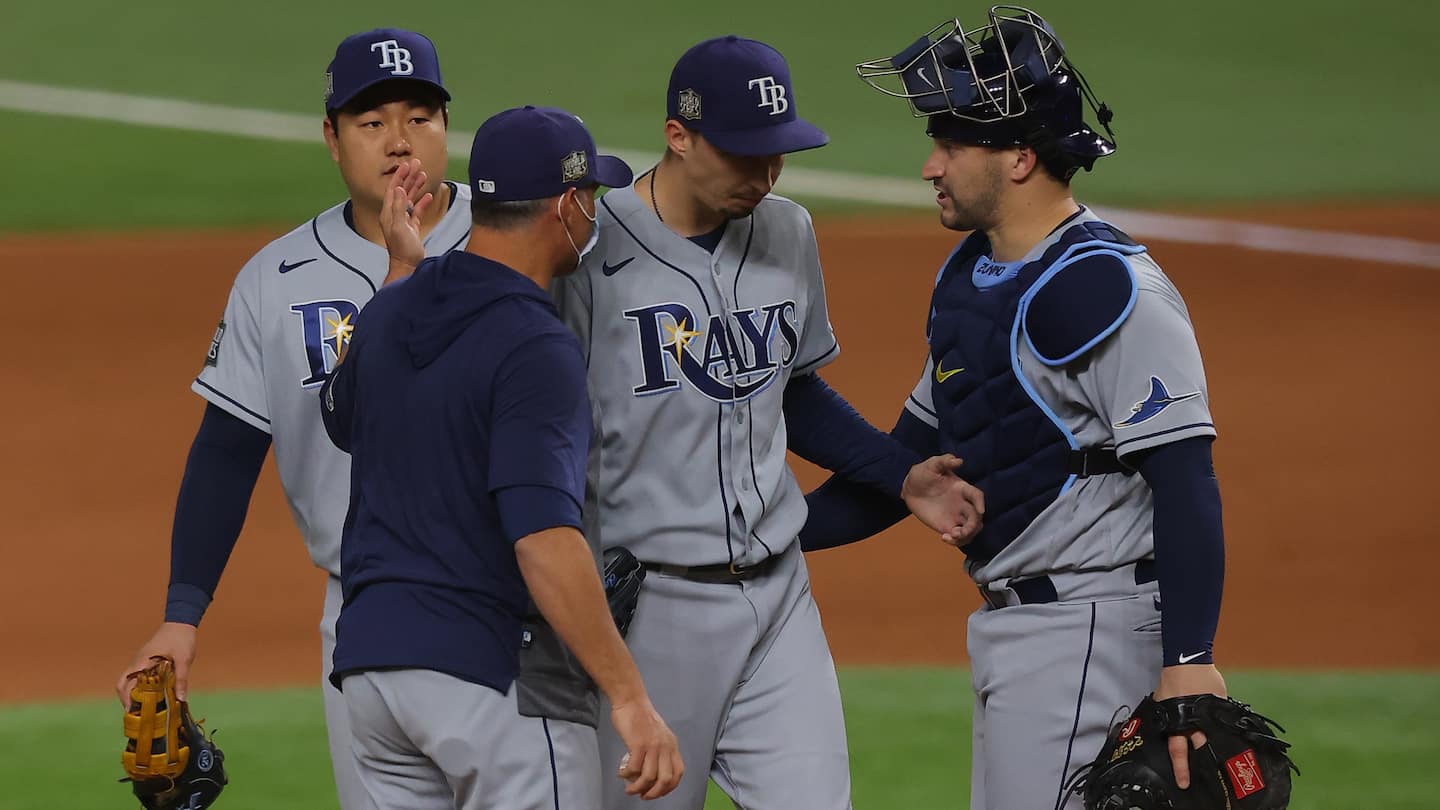 But there’s no way to analyze the Dodgers’ title, to watch the pile of bodies in those beautiful blue-and-white uniforms celebrate the accomplishment, and not think, “What if Kevin Cash had left Blake Snell in?”

“Fair question,” Cash, the Rays’ manager, said as the Dodgers received the trophy on the field. “I don’t know if I’ve got the best answer right now. He did above and beyond what any of us could have asked for.”

Snell’s reward for his work: the hook. That’s what Tuesday night amounted to: The analytics-driven Rays removed a starting pitcher who had a 1-0 lead, who had gotten one out in the sixth, who had struck out nine, who had given up two measly singles and hadn’t walked anyone.

Read that sentence. Know the result. Consider whether it makes any sense.

Such psychology is secondary these days, if it’s even considered at all. When he walked off the mound in the bottom of the sixth, Snell surrendered both the baseball and the Rays’ distinct advantage in Game 6. Snell had faced 18 Los Angeles Dodgers. Only three had managed to hit a ball that reached the outfield. The third came on Snell’s 73rd pitch, which Dodgers catcher Austin Barnes floated into center field, a single, just Los Angeles’s second base runner of the night.

The next three hitters were the top of the Dodgers’ lineup: Mookie Betts, Corey Seager and Justin Turner. All are dangerous. None had touched Snell — six times up, six strikeouts.

Yet with one out, here came Cash.

This must have been a discussion of strategy and approach to Betts, one of the game’s best players, right? Instead, Cash asked for the ball. In disbelief, Snell handed it to him.

“For most of that game, I was dominating every outcome possible,” Snell said. “And that lineup is so talented, man. So talented.”

When Snell walked off the mound, the socially distanced, decidedly pro-Dodgers crowd of 11,437 erupted. Against Snell, the Dodgers had no chance. Against anyone else, they had . . . something.

This is the part of modern baseball that just, frankly, stinks. It is built on analysis and probability, and there’s nothing wrong with that — until it strips the human beings playing and running the game of the ability to make decisions based on what they feel, what they see. Any casual fan could see what Snell was working with, a pinpoint fastball and an absolute hammer of a curve. The Dodgers were befuddled.

Of those 18 Los Angeles hitters Snell had faced, only Chris Taylor’s third-inning single and AJ Pollock’s scalded line drive to third a batter later could be even remotely described as hard-hit. If the Rays were going to force a seventh game, Snell was going to force it for them. Bob Gibson and Tom Seaver, rest their souls, would be proud.

The basis for such a move would be twofold: Cash has complete faith in a long list of his relievers, a group he referred to during a heated exchange with the New York Yankees as a “stable of guys who throw 98.” Snell, though, spent the days before his start arguing he should be part of the stable — at least in spirit. He is a former Cy Young Award winner. And with his team holding a 1-0 lead in a game it needed to win to extend its season, he was allowed to get 16 outs.

“I’d rather be the guy that stays out there as long as I can,” Snell said.

The other reason teams often give for removing pitchers early: Statistics show the average pitcher is significantly worse when he faces a lineup for a third time. Fatigue can mean his stuff is diminished. Familiarity can be an advantage for the hitters, who have time to adjust to what they have seen. It’s real info that teams deploy accordingly.

“I value that,” Cash said. “I totally understand the questions that come with it. Blake gave us every opportunity to win. They’re not easy decisions. . . . I didn’t want Mookie or Seager seeing Blake a third time.”

Yet for Snell, the third time through hasn’t been much of a factor. In 2020, hitters produced a .462 on-base-plus-slugging percentage against him the first time up, a .977 OPS the second time — and a .913 OPS the third time through. Sure, the pandemic-shortened season left him with only 11 starts, so maybe that’s a small sample. But for his career, he isn’t markedly worse: .592 the first time through, .711 the next time and just a slight bump to .742 the third time. Throw in the 16 times in his career when he has faced a lineup a fourth time — which has yielded a .125 OPS, his best games — and it’s clear Snell has the ability to pitch deeper than the Rays allow.

“The hardest thing for me is I was rolling,” Snell said. “I was in a groove. I just really felt dominant. I had them guessing. It’s just tough for me. It’s going to be tough for a while.”

To be fair to Tampa Bay, it’s not the only organization to think this way. Indeed, the Dodgers employ such strategy, and in Game 5, the great Kershaw was removed after 5⅔ innings and just 85 pitches. Workhorses now don’t go eight innings. They go six.

Think about the seventh game of the 2019 World Series. Houston right-hander Zack Greinke was blitzing through the Washington Nationals’ lineup, throwing a shutout into the seventh inning. On his 75th pitch, he allowed a solo homer to Anthony Rendon, then walked Juan Soto. But the Astros still held a 2-1 lead.

The feeling in the Nationals’ dugout at that point: anybody but Greinke. The feeling for A.J. Hinch, then the Houston manager and a top figure in a franchise that leans heavily on analytics: Give me the ball.

You know the rest: Greinke walked off after 80 pitches. Reliever Will Harris came in. Howie Kendrick homered off the right field foul pole. The move gave Washington life — and a championship. It stunned the Astros, who allowed three more runs to let the Nats close it out more casually.

Back to Tuesday night. Cash’s choice, with one on and one out: right-hander Nick Anderson.

“[Snell] was dominating us, and we just weren’t seeing him,” Dodgers Manager Dave Roberts said. “When they went to the ’pen, Mookie looked at me a little. We were just glad Snell was out of the game.”

Anderson was a key component to Cash’s bullpen during the regular season. Yet when he took over for the unhittable Snell, he had given up runs in each of his past six outings. During that time, a stretch of 9⅔ innings, hitters ripped Anderson for a .342 batting average and a 1.010 OPS.

“News flash!!!” a big leaguer wrote by text just after the move. “Baseball is not played inside a computer. I love this!!!!! This makes me so happy. Why would you take that guy out????”

That’s what dugouts and clubhouses feel in the modern era. The information is great. But baseball has a heart and soul, and it’s being ripped out.

“I’m not the manager,” Rays center fielder Kevin Kiermaier said. “I don’t make decisions. Asking my opinion, it was Blake’s game. He was dominating. I don’t really care what the numbers say — third time through the order or whatever. There wasn’t many guys making contact, and no hard contact whatsoever.”

With Barnes on first, Betts — helpless against Snell — ripped a ball down the third base line, a double to put runners on second and third. When Anderson uncorked a wild pitch, Barnes scampered home. Tie game.

Snell stewed. Seager pulled a grounder to first base. Betts — one of the game’s best base runners — broke for home. Ji-Man Choi’s throw was too late.

The Dodgers led, and the defining story for years to come will be how they replaced the replays of Orel Hershiser and Kirk Gibson from 1988 with memories of their own. But they had an assist from the dugout across the diamond.

The computer that generated the algorithms that led to Kevin Cash’s move in the sixth game of the World Series needs to be turned off to get its winter’s rest. With his offseason here, Cash, a human being, actually has to try to get some sleep.

Good luck with that.

In an entertaining spectacle, Mike Tyson and Roy Jones Jr. battle to a draw in Los Angeles

First place may be a mirage for Washington, but its young stars look as real as it gets

As thousands of athletes get coronavirus tests, nurses wonder: What about us?

The pandemic sparked interest in chess. ‘The Queen’s Gambit’ made it explode.