No asterisk required: These Dodgers were historically great — and legitimate champions 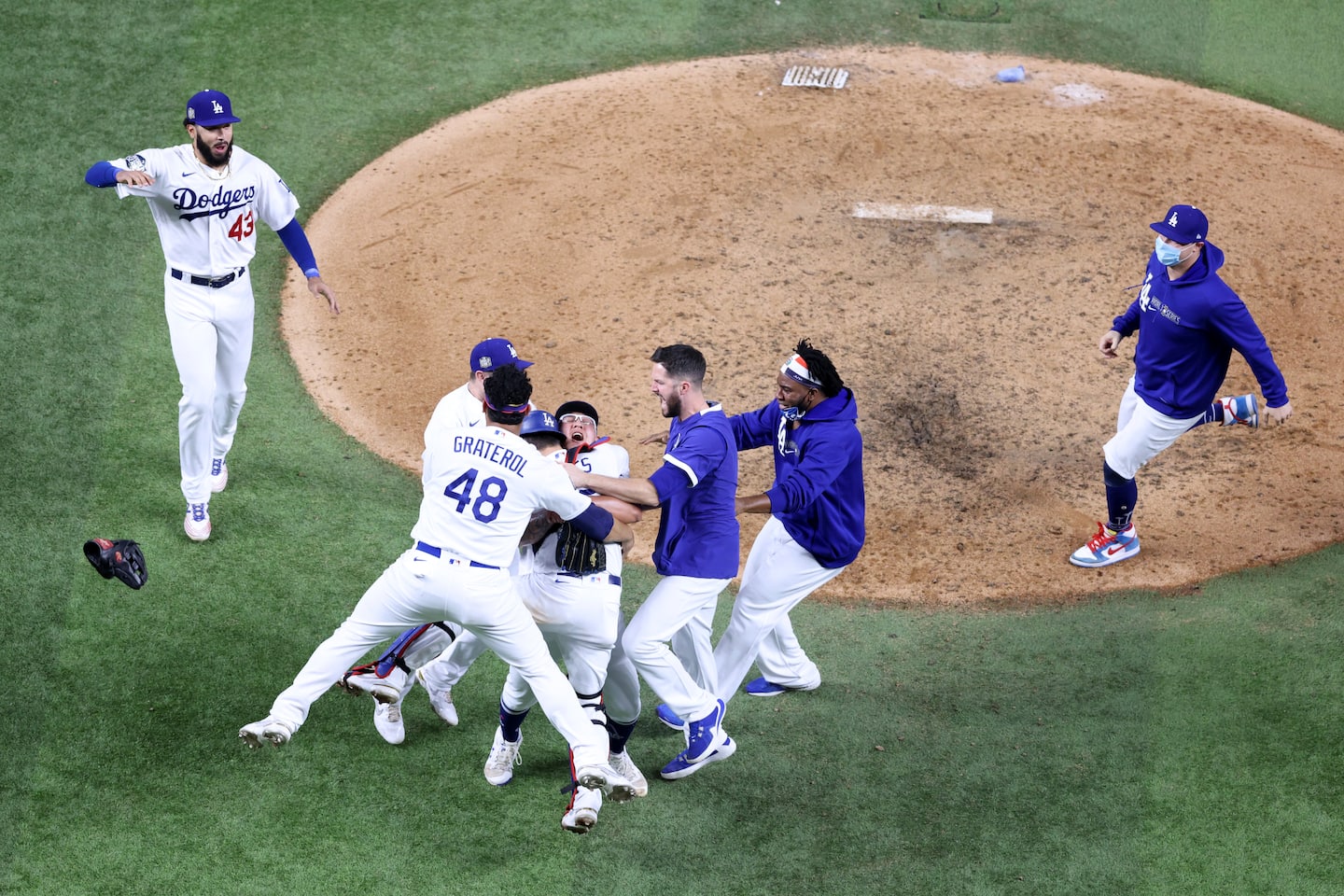 L.A. ought to feel weightless — flap those Dodger Blue arms, and maybe you can fly. But MLB’s new champs now have a new and unfair weight to carry.

So let’s help them.

Let’s get this straight. The first Dodgers title in 32 years should carry exactly as much heft — and as capably bear the examination of time — as any World Series won by their predecessors.

This championship is not an achievement that deserves an ounce of denigration, just because MLB’s exciting and uncharacteristically scrupulous examination came in an October after a mere 60-game regular season.

The issue is the opposite. Instead, we would be wise to wonder whether, because of the novel coronavirus pandemic, this team was cheated — yes, again — this time bilked of a full, 162-game chance to stamp itself as one of the greatest.

That is the true reputational damage this mini-season did to the Dodgers: not that they played too few games but that they never got to play enough. The virus denied them, perhaps, a 115-win season and six-month records that could compare with anyone.

So when we hear the knee-jerk smirk of our age, when anyone says “Asterisk Dodgers,” just respond, “For shame.” This is the champion — maybe a historically important one — that never got to show its full worth.

“We have a rich history,” Dodgers owner Mark Walter said on the victory platform, “but no other team has faced what this team did — an impossible year.”

The entire postseason, in which the Dodgers went 13-5 with a staggering 101-66 run differential, was a validation of their otherworldly 2.27-run average margin of victory in the regular season.

Of all the great New York Yankees champions, only the 1927 and 1939 teams had a bigger average margin of victory, the former led by Babe Ruth and Lou Gehrig and the latter by Joe DiMaggio. Nice company.

Too bad — really, too bad, not snarky “too bad” — that these Dodgers will not get to show whether they could have matched full-season feats with such teams.

This pandemic has damaged everything. Don’t let it shrink the Dodgers’ ring size: It’s extra-large, just like recent champs who made thrilling runs to end droughts on Chicago’s North Side and in D.C.

This year could have ended with a disputed winner. Results might have been challenged if a team with the 11th to 16th best record in the sport — such mediocre clubs have never been allowed in October before — had somehow gotten hot and grabbed a crown.

In a worst-possible example, almost too grim to contemplate, what if the (29-31) Houston Cheating Astros had beaten the Dodgers? Even an Astros return to the World Series would have smeared the event. Best that Dusty Baker, managing in a pandemic at 71, helped Houston regain some ALCS dignity without a pennant.

Despite having the best record in the game and one of the highest winning percentages and average scoring margins ever, Los Angeles still had to face four rounds of playoffs, something no first-place team ever had to hurdle.

As a great team should, the Dodgers swept the Milwaukee Brewers in the kind of made-for-a-fluke-upset best-of-three series — against a sub-.500 team — that no best-in-MLB team should have to play again.

One double-error, quadruple-blunder play flipped a 7-6 win to an 8-7 loss when the Rays were down to their last strike in Game 4. The center fielder booted a single, the cutoff man threw poorly toward home, the catcher whiffed a perfectly catchable toss and, just for unnecessary garnish, the losing pitcher forgot to back up home plate.

How would they “take it,” wear it, bear it — especially Kershaw, Mr. Mediocre in October (12-12 at that point) through his long, luminous career?

I started to add them up. “We don’t have to do that around here,” he said, dismally. “It’s five now.”

This season’s final game will leave two unfortunate memories: one strategic, the other ethical.

Modern analytics define the Rays. Tampa Bay’s past 13 seasons are a prime perennial proof that they work, often brilliantly. But strong theories should be applied within context, not worshiped.

Game 6 turned on one awful decision made by the Rays and enacted by Manager Kevin Cash. When computers grow eyes and can see 2018 AL Cy Young winner Blake Snell fanning Mookie Betts twice — including the second time with a 98-mph up-and-away fastball on which Betts swung two feet late — they no longer will reach idiotic conclusions such as, “Go hook Snell after 73 pitches, including nine whiffs, when he is pitching just like Sandy Koufax.”

The Rays’ problem was not “analytics.” It was analytics malpractice. This season, Betts hit .200 with no homers against lefties. “Whew, thank you,” Betts said later of seeing Cash yank Snell. “He was rolling.”

Snell screamed the world’s favorite four-letter word as he left with a man on first and a 1-0 lead in the sixth inning. Betts doubled off Nick Anderson, and the Dodgers soon led 2-1.

Because L.A. might have won Game 6 anyway (Betts homered later — off a right-hander) or Game 7, the Rays’ colossal over-managing will be one more distraction from the Dodgers’ excellence.

Finally, the coronavirus had to make a cameo in this series, didn’t it? What would 2020 be without the virus proving it could sneak in anywhere, even an MLB bubble? But Dodgers star Justin Turner, removed in the middle of Game 6 when one of his test results came back positive, did not have to turn himself into a poster boy for pandemic irresponsibility.

Turner symbolizes far too much of America now: I will take a world health crisis, which looks like it might kill more Americans than died in battle in World War II (291,000), sort of seriously — unless I’m having a real good time.

Neither bad Rays strategy nor Turner’s postgame folly should deter us from understanding what we just saw.

The most consistently excellent team of this era — with 2020 showcasing the very best version of itself — finally won an overdue championship by beating the second-best team in the NL, the best team in the AL, enduring four rounds of playoffs and doing it all under mountainous pressure during a pandemic.

If you want to give these Dodgers an asterisk, it should redirect to a footnote that says: “Nobody ever won a title that was more valid than this one.”

The Broncos still need a franchise QB, but Sunday they’ll settle for anyone who can pass

In an entertaining spectacle, Mike Tyson and Roy Jones Jr. battle to a draw in Los Angeles