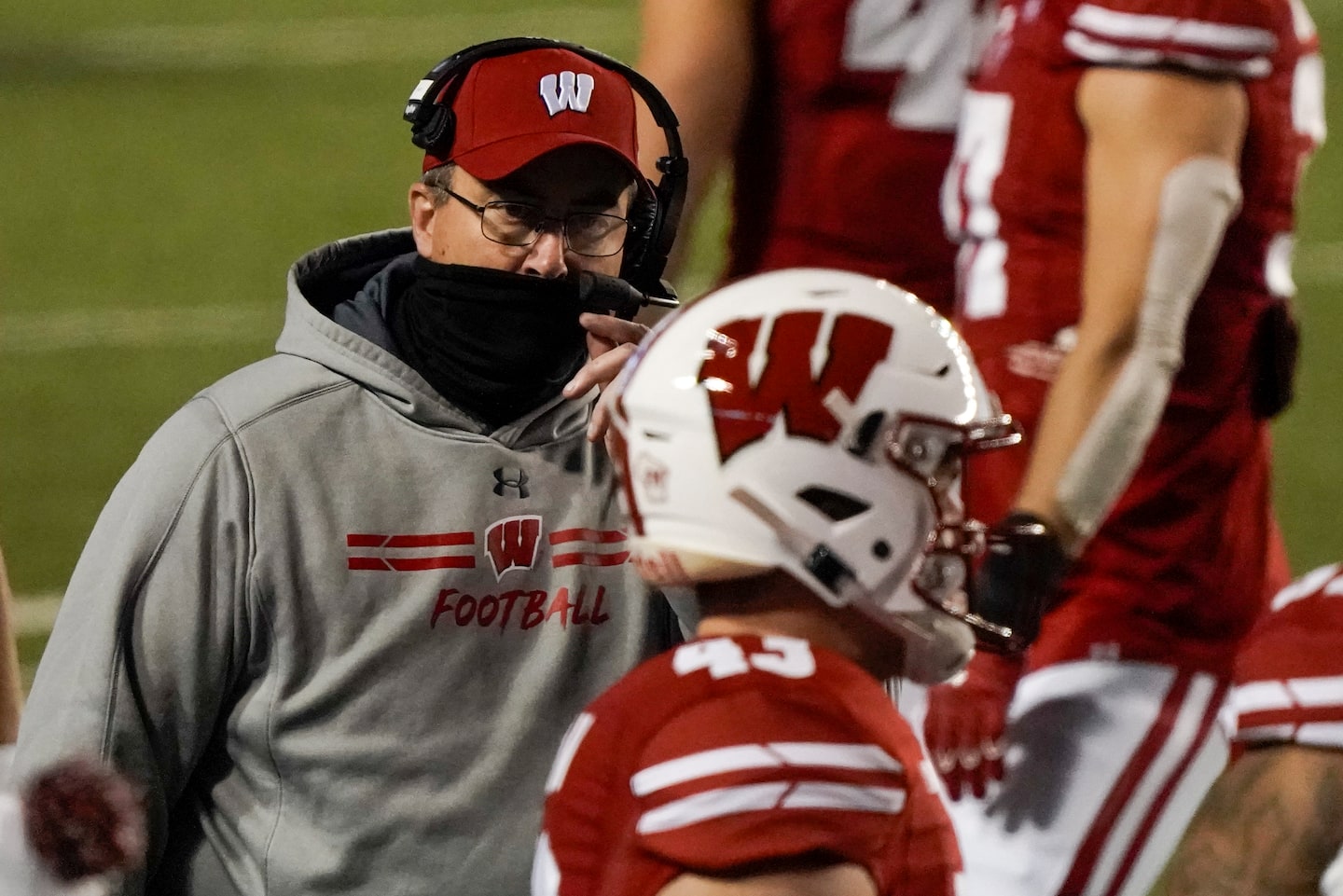 “This decision fell into the category where the chancellor and I had the prerogative to make the decision,” said Alvarez, who also said the 12 positive tests made Alvarez and Blank want to “get our arms around this and control the covid and the virus now before it got out of hand.”

The cancellation made it 37 postponed or canceled games since the outset of the college football season, with three this week, including Marshall at Florida International and North Texas at Texas El Paso.

Two strands of coronavirus protocol could threaten Wisconsin’s ensuing game, at home Nov. 7 against Purdue: the seven-day halt of football operations and the Big Ten guideline of 10 days of isolation for coaches who test positive (alongside 21 for players). Chryst learned of his own positive test around midday Tuesday. As he followed Alvarez on the video call, he expressed repeated uncertainty of what would happen from here but said: “We’ve got to make use of this pause. We’ve got to flatten out what was happening.”

They will aim to do so within a hotspot state that a health official called “a nightmare scenario” yet upon a populous, 45,000-strong campus that had succeeded against the virus in recent weeks. Positive cases among students and employees on campus went from 290 on Sept. 9 alone to 123 across the seven days running up to Tuesday. In a relative ghost town during the game Friday night, some Wisconsin students expressed pride in their school’s adherence to safety procedures. Even as the number of on-campus positive results did rise from just two positive tests campuswide on Monday to 40 on Tuesday, the outbreak within the island of football baffled Alvarez and Chryst.

“The first month of testing and practice, we had one positive, Wednesday prior to the game,” said Alvarez, the Wisconsin institution who coached the team from 1990 to 2005 and again as an interim briefly in 2012 and 2014. Soon thereafter he said, “We felt after the first month we had a pretty good grasp on it and were confident in it.” As to what might have happened, he called it “hard to answer, why. I don’t have an answer for that.”

“We don’t know, like, did we have one superspreader, I don’t know that,” Chryst said. “You’re absolutely going to always look at, ‘How can we get better?’ and ‘What do we need to do?’” He wondered aloud about the football team dinner at the hotel the night before the home game, a long-held ritual among big-time college football programs seeking cohesion and focus. He said they had “spaced out the seating — for some, 10 in a room.” But, he said, “I don’t know a ground zero or where it really started.”

He said he felt fine physically but not so emotionally and said, “When you have a hand in [an outbreak], that’s where there’s a disappointment.”

The Wisconsin-Nebraska game became a cancellation rather than a postponement because the Big Ten exercised caution and started a month or more later than other leagues such as the SEC, ACC and Big 12, leaving it less wiggle room in scheduling. The eight-game, conference-only schedule runs without off weeks from Oct. 24 to Dec. 12, with the Big Ten championship game planned for Dec. 19. That prevented a postponement along the lines of the five SEC games that have moved, including LSU-Florida from Oct. 17 to Dec. 12 after an outbreak at Florida, and answered the hovering question about whether some Big Ten teams would wind up playing fewer games than others.

As the week began, both the Wisconsin State Journal of Madison and the Milwaukee Journal Sentinel reported that the top two active Wisconsin quarterbacks, Graham Mertz and Chase Wolf, tested positive for the virus. That meant that, upon a second positive test, those players would have to sit out 21 days, a hiatus a week or more longer than in the other four Power Five conferences. The ineligibility of Mertz, the redshirt freshman who filled in for the injured Jack Coan and excelled with 20-for-21 passing against Illinois, and Wolf, could have left Wisconsin playing a fourth-string quarterback, Danny Vanden Boom.

Already the Big Ten had seen another pandemic phenomenon, that of a head coach testing positive and watching a game from home. That happened Saturday when Purdue beat Iowa, 24-20, in West Lafayette, Ind., while Purdue Coach Jeff Brohm felt the excruciation of absence from the sideline.

“Well, it wasn’t a whole lot of fun,” he said Monday in a video conference as he aimed for a return to practice Wednesday, saying his wife and two children had left him alone in the house to go to the stadium and that, “I haven’t really experienced that before, nor probably do I ever look forward to doing it again, because it doesn’t feel like you’re part of it a whole lot and there’s not a whole lot you can do.”

He described a scene of “multiple TVs in the house [and] in the little pool house we have outside,” as if he might have drifted from one room to another. “And yes, I did have a dog. There were a few times when I yelled. . . . So I felt bad. I scared the dog a few times. I think for the most part I was somewhat calm and collected,” he said.

The three-fourths poodle, one-fourth Saint Bernard named Coco, whom Brohm’s wife, Jennifer, and daughter, Brooke, seem to have welcomed to the family without the coach’s blessing during the pandemic, seems to have become one of those pets who transcends such reluctance, all while turning up in a snapshot of the moment of college football history. “They keep you occupied,” Brohm said, “and they give you something to do, and during this isolation that I’ve had, actually walking the dog around the neighborhood is about the only thing I can do where I feel like I accomplish anything.”

First place may be a mirage for Washington, but its young stars look as real as it gets

As thousands of athletes get coronavirus tests, nurses wonder: What about us?

The pandemic sparked interest in chess. ‘The Queen’s Gambit’ made it explode.

Washington overwhelms the Cowboys, 41-16, to grab the NFC East lead