Classic toys are making a comeback during the pandemic 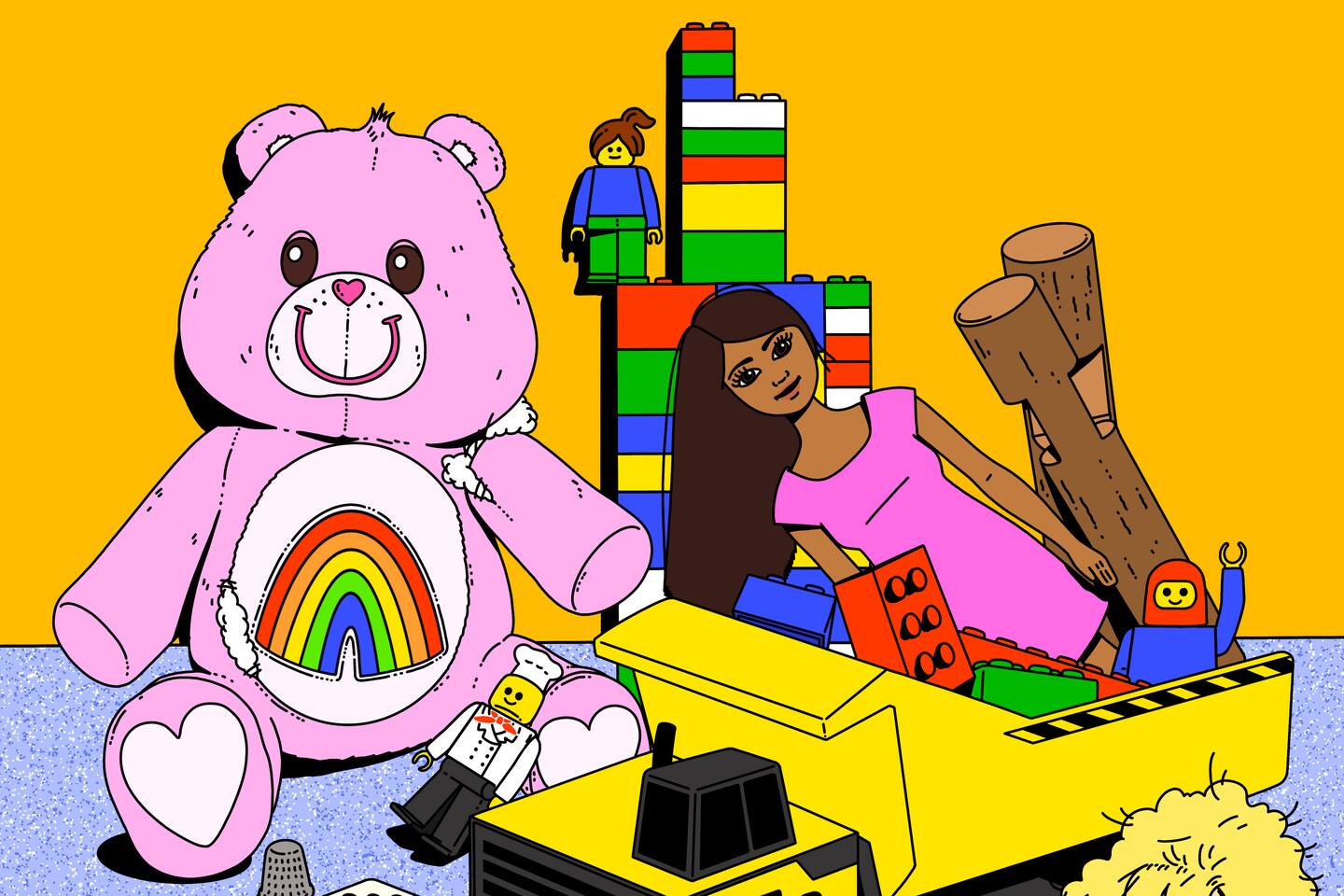 The pandemic has ushered a fundamental shift in toy-buying habits; instead of perusing the toy aisle or trading notes during playdates, parents are drawing on their own childhoods for inspiration. Classic toys also have strong appeal for adults who want their children engaged in open-ended play for long periods of time.

“It’s all about the tried-and-true, the toys that are already familiar,” said Jay Foreman, chief executive of Basic Fun, the Florida company behind such classics as Tonka, Lincoln Logs, Lite-Brite and Care Bears. “Parents and grandparents are not watching Nickelodeon or YouTube to see what’s new. They’re buying toys they know: Barbie DreamHouse, Tonka Mighty Dump Trucks.”

Analysts expect toy sales to be a bright spot in a holiday season mired by recession and high unemployment. Consumers are expected to spend an average of $650 on gifts this holiday season, down slightly from $659 a year ago, according to the National Retail Federation. And though nearly 2 in 5 adults say they will buy less this year, analysts say, parents tend to prioritize the children on their gift lists. Plus, they note, families on the higher end of the income scale are spending less on movies, ballgames, travel and other entertainment during the pandemic, freeing up more money for the holidays.

Toy sales have climbed 18 percent so far this year, according to market research firm NPD Group, a stark contrast to the double-digit declines reported by department stores, and other retailers that sell furniture and electronics. Much of the toy industry’s growth was fueled by board games, puzzles and outdoor toys like bicycles, scooters and inflatable pools, as families looked for ways to unplug after a day filled with Zoom calls and virtual learning. Among the season’s most popular toys, according to NPD: Little Tikes, Barbies and Hot Wheels. Lego, the world’s largest and most profitable toymaker, also has carved out a niche in the coveted adult market.

“It’s really hard to find a hot product this year, and one of the reasons is that kids aren’t being social with each other,” said Chris Byrne, a toy industry consultant. “You can publish all the hot-toy lists you want to, but it’s the kid-to-kid interaction that tends to drive whether a toy is cool and in demand.”

Though novelties abound — such as Present Pets, an interactive puppy that unboxes itself, and Vango goggles that make the world look upside-down — industry analysts say retailers and manufacturers have stocked up on classic toys. In September, both Mattel and Hasbro said strong demand for longtime brands boosted third-quarter results: Barbie sales grew 30 percent; Hot Wheels jumped 9 percent, and family games such as Monopoly and Jenga surged 21 percent.

“It is all about classic play this year,” Byrne said. “People are anxiety-ridden, and those nurturing games we remember from our childhoods are like comfort food.”

Basic Fun’s Jay Foreman is preparing for what could be his most profitable holiday season in years. He expects to sell 1.5 million Care Bears, three times more than he had originally planned. Overall sales, he says, are on track to grow 10 percent from last year.

But the pandemic has created its share of challenges: unpredictable demand, supply chain hiccups and a trucking shortage that is keeping some toys from making it to stores. That’s left companies of all sizes, from niche board game makers to Build-A-Bear, to rethink every part of their approach.

“I don’t think any of us expected to see this type of demand this year,” Foreman said. “It has been a tale of two anxieties: The pandemic hit and we panicked that people would stop buying toys. But then we realized, wait a minute, sales are through the roof. Now we’re struggling to get the last bits of demand out the door from our warehouses and factories.”

Parents, he said, are forgoing cheaper impulse buys — the $3 or $5 item a kid might chuck into the shopping cart or grab on their way to the checkout.

“The magic price point for a toy has always been $20 to $30, but all of a sudden we have merchants calling and saying, ‘What do you have for $50?’” he said. “Many parents have disposable income — they’re not going to ballgames or Disney World or on vacations — and they want to keep their kids entertained.”

Demand for the game has been climbing steadily since stay-at-home orders took off in March, according to Carly McGinnis, the company’s chief operating officer. Year-over-year sales have doubled, and the company is printing close to 5 million games this year, roughly triple what it did in 2019.

“This year there’s been a shift to family games — stuff that moms and dads can buy to keep their kids entertained at home,” McGinnis said, adding that sales of the adults-only version of the game have declined about 10 percent during the pandemic. “Honestly it’s been really challenging because we just weren’t expecting this.”

A 94 percent spike in game and puzzle sales between March and May led much of the toy industry’s growth during the pandemic, according to the NPD Group. Although some of that growth leveled off during the summer, when families spent more time outdoors, analysts said they expect board games and other indoor activities to pick back up again during the holidays.

McGinnis has spent the last eight months preparing for another sales rush. She was caught off guard in March, she said, when one of the warehouses the company relies on shut down just as demand was skyrocketing. Executives scrambled to find alternatives. The company now has five warehouses, in different parts of the country and in Canada, increasing the likelihood it will be able to continue shipping toys even if a coronavirus resurgence leads parts of the country close down again.

“We realized we needed to put in more stopgaps in case there are more shutdowns,” said McGinnis, who now has 40 full-time employees, up from 25 before the pandemic.

There have been other hurdles, too. The company’s games are manufactured in China, where factories are running behind and shipping options have become limited.

“Getting freight out of China has been challenging and expensive — it’s nearly impossible to get onto a plane right now,” McGinnis said. “There fewer boats this year, fewer dockworkers unloading cargo. Most of the ports are open but they shut down if there’s an outbreak, so we have to be prepared anything.”

Shipping delays and a shortage of trucks has also complicated matters for MGA Entertainment, the toy giant behind popular brands like LOL Surprise and Little Tikes. Chief executive Isaac Larian says more than 400 containers of holiday toys — including its new LOL Remix dolls and Tobi kid’s smartwatch — have been stuck at the Port of Los Angeles for weeks.

“We cannot get trucks, so these hot products are literally just sitting at the port,” he said. “Every day that they sit there is another day they’re not on the shelf.”

Winning over children is one thing. Convincing their parents and grandparents to buy more toys — well, that takes a different kind of effort.

Spin Master, the maker of Etch A Sketch, Hatchimals and Paw Patrol, has been looking for new ways to appeal to adults during the pandemic, according to Laura Henderson, the company’s executive vice president of marketing and e-commerce. The company recently brought its advertising department in-house and is spending more on attention-grabbing store displays to appeal to shoppers on “mission-based trips.” It’s also promoting ads on Facebook and Instagram that play up top-toy awards and other accolades that might appeal to caregivers.

“What parents and grandparents are looking for us validation that they’re buying something kids will enjoy,” Henderson said. “The biggest driver is still what the kid wants, but we’re also seeing a desire for nostalgia.”

Lindsay Maines has spent quarantine stocking up on Matchbox cars, 200-piece puzzles and canisters of Play-Doh for her children. Her 5-year-old spends hours playing with Lego and Lincoln Logs, she says, while her teenagers are going on more bike rides and doing crafts when they’re not taking virtual classes or scrolling through Tik Tok.

The entire family is reaching for board games a lot more than they used to. Her son and husband, she said, recently spent five days playing a single game of Monopoly on the family room floor.

“I kept saying, ‘Hey, are we going to clean this up?,’” said Maines, 46, who lives in Germantown, Md. “But honestly, I didn’t mind. We all want to go back to the toys of our youth and share them with our children, especially now.”

This holiday season, she says instead of buying gifts, she will focus on family traditions like baking cookies and cutting down a Christmas tree together. But she does have a couple of items on her shopping list: A new Etch A Sketch and more Play-Doh.

Tony Hsieh, entrepreneur who made Zappos an online retail giant, dies at 46

How some savvy fans are preserving the PS3’s multiplayer games