Someone out there wants to adopt your creepy toys. There’s a matchmaker for that. 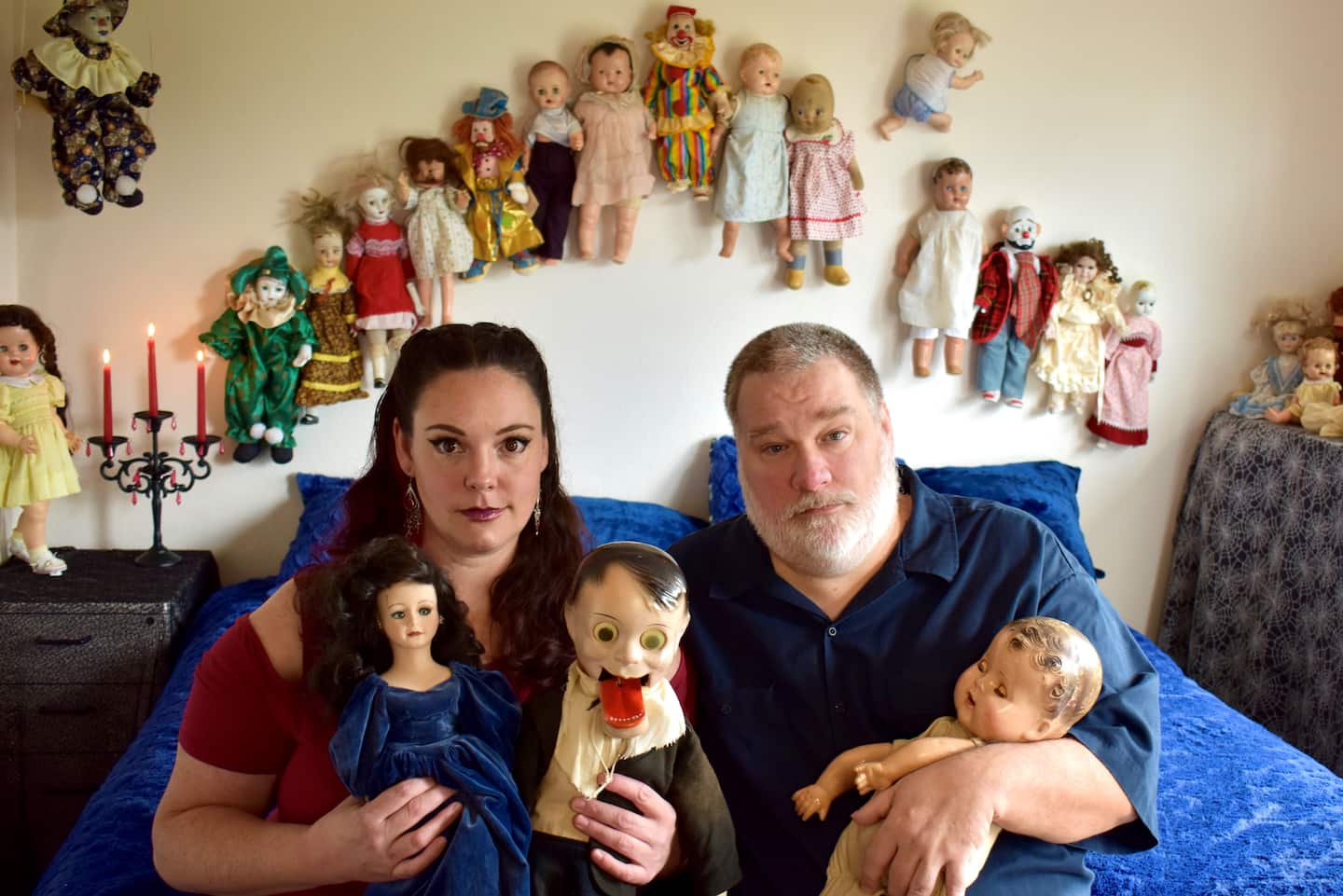 A ventriloquist’s dummy with a broken jaw? A bunny that moves from room to room on its own? A doll that came out of a box with a seemingly bloodstained dress? Even a haunted yo-yo. Unsettling Toys will take the offending object off your hands, compassionately — and hopefully — permanently.

“If, in very rare instances, a toy reappears in the home,” the website promises, “we will re-remove it promptly.”

The idea for Unsettling Toys emerged spontaneously after Sara Derrickson and her partner, Brian Jillson, attended a ghost conference in 2018. They weren’t into ghosts; it just seemed fun. Energized by the conference, they got to dreaming. Last year, for Jillson’s 50th birthday, Derrickson created social media accounts and had a logo designed. Boom, they were in the misfit toy adoption business.

The toys are real; the matchmaking is virtual, conducted via Instagram, Zoom and UPS.

It turns out there’s a market for weird and used toys, even spooky, broken and (potentially) possessed ones. Clients adopt them for $25 to $60, shipping and adoption certificate included. The lucky ones also come with a backstory.

That’s what Derrickson and Jillson are really after. They keep notes on each one.

Unsettling Toys is a small-scale business — they were thrilled with a Halloween uptick when nine dolls were adopted in a single day. They have perhaps 150 toys on hand, stored all over their homes (they are a couple but do not live together). The toys are donated by people who don’t want them around for whatever reason.

Before the pandemic, Derrickson and Jillson would remove them, upon request, from homes in the Portland area. Now they get packages from all over the country.

“Some of these toys would just be destroyed,” Derrickson said. “It’s taking something that has already had one lifetime and giving it another one.”

But you won’t see a “buy” button on their website. If you want a toy, you’ll need to send a message.

“That starts a conversation,” Jillson said. These conversations reveal the stories, and that’s what has been eye-opening for Derrickson and Jillson.

At this point, neither intends on giving up their day jobs. Derrickson, 39, is a school psychologist. Jillson, 51, intends to go back to bartending when pandemic restrictions lift. Derrickson was into what she calls “weirdo culture” before they started the business, mostly cosplay and zombies. Jillson liked horror trivia. Neither knew quite what they were getting into when they began Unsettling Toys.

One California mother contacted them about a doll that looked harmless, with a cute face and long dark hair. Her daughter had received it as a present, but the girl kept having middle-of-the-night conversations with it, then nightmares. When the daughter announced she saw it walking down the hall, they sent the doll away and cleansed the home with holy water. It arrived at Unsettling Toys naked, wrapped in black plastic.

Another set of dolls arrived after they freaked out a doll collector’s dog. When the collector picked them up to dust, “the dog went nuts, barking, nipping, spinning in circles,” according to Derrickson’s notes. Could the dog have sensed something?

More often, however, “it’s the duration rather than the intensity,” Derrickson said. “A lot of people have been living with things they don’t like and make them uncomfortable for a long time.”

Many of the toys, some broken or battered, were once important to someone. That’s why they call each one a “case.”

In mid-2019, Derrickson was contacted by the son of a doll collector. According to her notes, “He said of all the toys he inherited, Amelie and Adoline were the most unsettling. He said their faces made him uncomfortable but did not elaborate.” He brought them to Jillson then abruptly left, which he said seemed strange.

The dolls looked peaceful and pleasant — until Derrickson began photographing them. In photos, lovely Adoline looks intense, even angry.

Deedee Jebrail, who lives near Temecula, Calif., saw the dolls online and adopted them. But first, she was full of questions — if the man who dropped off the dolls didn’t like them, why didn’t he just put them in the trash? And what’s with the speedy exit? To her, it was a clue.

“A lot of people don’t want to talk about the paranormal because they’re scared what other people will think,” she said.

She should know. Jebrail, a retired insurance agent, co-hosts a paranormal podcast, although she considers herself more investigator than true believer. “One minute, you’re like, this is real,” she said. “Then your more logical side says, let’s put the brakes on.” She loves the ambiguity.

She adopted the dolls that freaked out the dog, too.

Decades ago, Christine Wilson’s mother gave her Scarlett, a porcelain doll wearing the green-and-white dress from the barbecue scene in “Gone With the Wind.” It was her mother’s favorite movie, and she had one rule, common among some doll-lovers: to keep Scarlett pristine, you must never take her from the box. Wilson carted Scarlett around long into adulthood. At some point, she figured, what the heck, removed Scarlett from the box and propped her on a cabinet.

Outside the box, Scarlett seemed odd. Wilson’s husband would glance up and see her across the room, staring directly at him.

“It’s creepy,” he told Wilson, although Wilson delighted in this.

Then came yoga, which led to introspection. One day, it hit her: She had to get rid of Scarlett. It wasn’t her stare. She could no longer disconnect the toy from racism.

She didn’t want to throw away a parent’s favorite gift, so she brought the doll to Derrickson. A few weeks later, Scarlett was adopted.

“I’ve collected dolls my whole life,” said Michele Benson, who adopted Scarlett for $30. “I don’t buy them because they’re worth money. I get them because I find them interesting.”

Benson, 51, who lives in Salem, Ore., said she heard about Unsettling Toys through a friend’s social media.

“I also adopted Harold, a little boy doll. Just the look on his face, I don’t know, it’s weird and interesting. Now, some people might think Harold’s creepy. Oh, and Christopher, this little porcelain doll in pajamas that I thought was the most cutest adorable thing.”

Scarlett’s dress was dusty and dingy. Benson, who works at a dry cleaner, hand washed it and put her on display. She placed Christopher next to an old clown doll with a broken laugh button. The clown had been silent for years, Benson swears, but when Christopher arrived in June, the clown perked up and found its wheezy laugh again.

When Benson looks at her dolls, she doesn’t see Scarlett O’Hara, racist plantation belle; she doesn’t see creepy; she sees a toy with an interesting look and a dress she cleaned and pressed herself.

“Ironically enough, the toys some people find creepy, they keep me sane in a way,” she said. “I clean and vacuum around them every week, I arrange them.”

Wickley has a pinched face, his eyes shut tight, his mouth open and twisted. Penelope Hall-Philbrick adores him. She also loves Annie, another doll that she considers Wickley’s twin sister.

Hall-Philbrick’s own twin sister, Bianca, doesn’t get it, she said. Truth be told, some might say they’re ugly.

Derrickson said Wickley came from someone who was freaked out by him. Annie’s original owner said she kept tipping over at weird times. Both owners were finally done with them.

Hall-Philbrick may be the only scary doll collector who was named South Carolina rookie wrestling state champion in the 64-pound weight class. She’s 7 years old, creative and very energetic. She loves horror movies.

Her mother, Amy Philbrick, says it’s kind of sweet. Philbrick said she stumbled across Unsettling Toys online about a year ago and bought three dolls for about $70.

“Penelope tucks them into bed at night with her, she covers them up,” Philbrick said. “She has a high chair. I mean, she really plays with these dolls.”

Just the way they are

Unsettling Toys offers new ways to look at old things, at their imperfections, their stories, their power.

“You can have five people look at the same doll and it’s almost like they’re putting their energy on it,” Jillson said. “They’re getting what they want out of it.”

A man from California sent photos of his dolls to Unsettling Toys and wanted to know if a particular one of their dolls would fit with them. He asked, “Can you show these pictures to the doll and see if he’d like to join us?” The doll did.

Other clients bring along psychics when they’re looking at the dolls over Zoom. Derrickson recalls one psychic asking the toy questions, then silently reflecting before recommending adoption.

“It’s been glorious,” Derrickson said. “Every time someone reaches out, we learn a little more about people’s beliefs about the world.”

One of the couple’s favorite toys is an old ventriloquist’s dummy. The elastic in his jaw has stretched so far that his tongue is hanging out of his mouth.

“He would be repairable,” Derrickson says, “but I like him the way he is.”

In Official Washington, Chasten Buttigieg is a stranger in a (very) strange land

Carolyn Hax: How can he clean if he doesn’t see dirt? A marital mystery.

After months in lockdown, we need some new memories. But can you ‘make’ them?