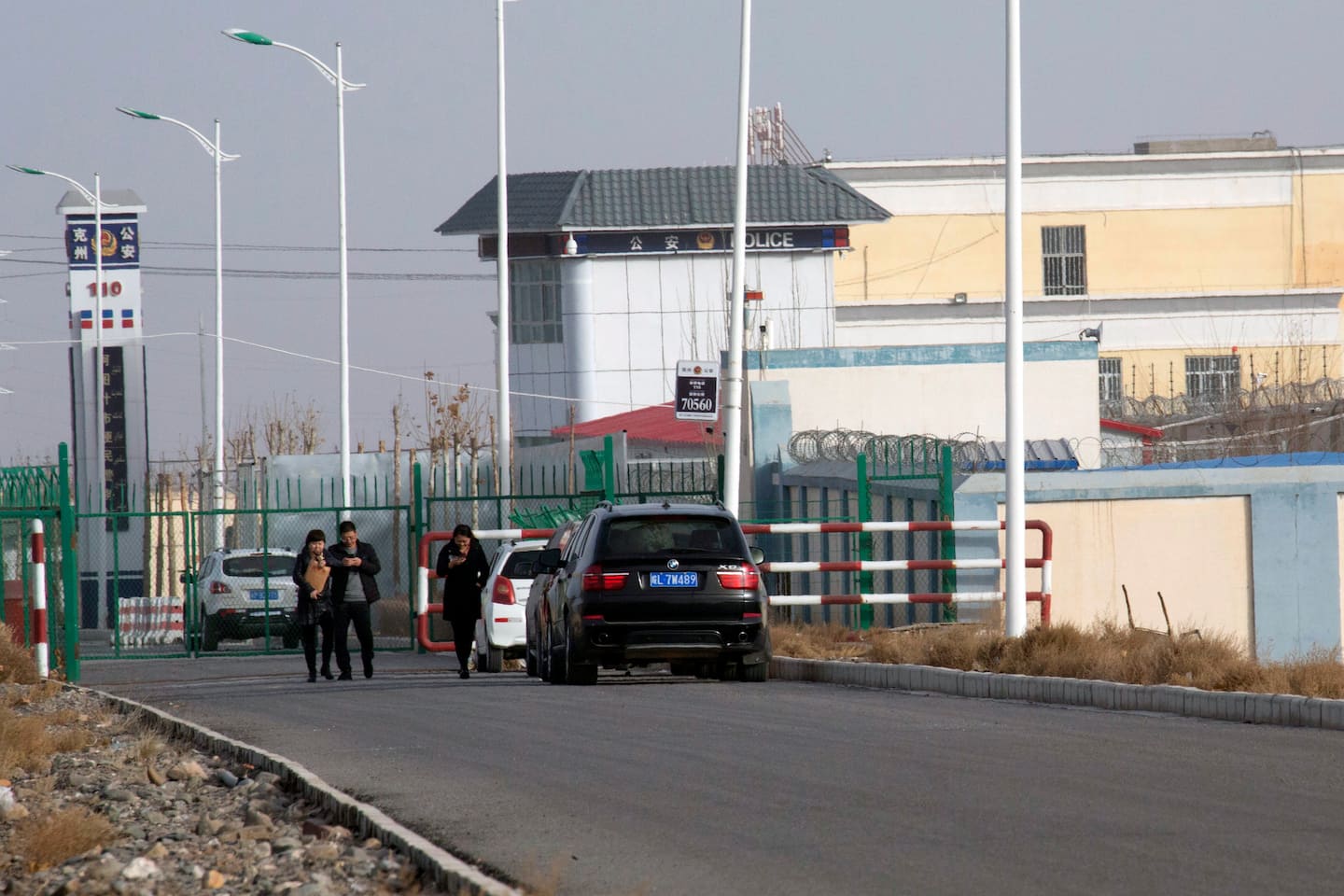 The staffers, who spoke on the condition of anonymity because the talks with the company took place in private meetings, said Apple was one of many U.S. companies that oppose the bill as it’s written. They declined to disclose details on the specific provisions Apple was trying to knock down or change because they feared providing that knowledge would identify them to Apple. But they both characterized Apple’s effort as an attempt to water down the bill.

“What Apple would like is we all just sit and talk and not have any real consequences,” said Cathy Feingold, director of the international department for the AFL-CIO, which has supported the bill. “They’re shocked because it’s the first time where there could be some actual effective enforceability.”

Apple spokesperson Josh Rosenstock said the company “is dedicated to ensuring that everyone in our supply chain is treated with dignity and respect. We abhor forced labor and support the goals of the Uyghur Forced Labor Prevention Act. We share the committee’s goal of eradicating forced labor and strengthening U.S. law, and we will continue working with them to achieve that.” He said the company earlier this year “conducted a detailed investigation with our suppliers in China and found no evidence of forced labor on Apple production lines, and we are continuing to monitor this closely.”

Apple’s lobbying firm, Fierce Government Relations, disclosed that it was lobbying on the bill on behalf of Apple in a disclosure form that was first reported by the Information. However, the form did not say whether Apple was for or against the bill or whether it wanted to modify it in any way. Lobbying disclosure forms do not require that information. Fierce referred The Washington Post to Apple’s public relations team.

Apple CEO Tim Cook has said publicly that Apple does not tolerate forced labor in its supply chain. “Forced labor is abhorrent,” Cook said in a congressional hearing in July. “We would not tolerate it in Apple,” he said, adding that Apple would “terminate a supplier relationship if it were found.”

The new bill would make it more difficult for U.S. companies to ignore abuses taking place in China and give U.S. authorities more power to enforce the law. One provision in the bill requires public companies to certify to the Securities and Exchange Commission that their products are not made using forced labor from Xinjiang. If companies are found to have used forced labor from the region, they could be prosecuted for securities violations.

While U.S. law already prevents companies from importing goods that were made using forced labor, the law is seldom enforced, and it’s difficult to prove U.S. companies know about the use of forced labor.

The Uyghur Forced Labor Prevention Act passed 406 to 3 in the House in September. People involved in the legislation said the apparel industry was caught off guard by how quickly it passed without much lobbying.

Now that the bill, sponsored by Rep. Jim McGovern (D-Mass.) and Sen. Marco Rubio (R-Fla.), is in front of the U.S. Senate, corporations have made more of a concerted effort to shape it, in part to blunt some of its sharper provisions, according to the two congressional staffers. Some companies have lobbied to have their names removed from the bill, these people say, because it calls out specific brands like Patagonia, Coca-Cola and Costco, for allegedly using forced labor from the region. It does not name Apple.

Patagonia, Coca-Cola and Costco didn’t respond to requests for comment.

The bill is primarily focused on textiles and other low-tech industries. For instance, Xinjiang’s sugar has made its way into Coca-Cola and the tomatoes have been used in Heinz ketchup, according to human rights reports.

Michael Mullen, senior vice president for Kraft Heinz, said in a written statement that the company’s suppliers are audited by a third party and that the audits have not identified “any issues.” He said if “issues related to inappropriate labor practices are discovered, we will take immediate action.” Mullen declined to name the auditing firm. Most firms have stopped auditing in Xinjiang because of limitations placed by the Chinese government.

Complying with the new bill could be costly to companies, especially in the textile industry, where cotton gets woven into garments around the world, making it difficult and expensive to trace. The Xinjiang region is known as a center for cotton production, and the apparel industry has earned most of the scrutiny for using textiles produced by allegedly forced labor in the region.

The SEC portion of the bill echoes a provision in the Dodd-Frank Act that requires companies to notify the government if their products contain conflict minerals from Congo. That provision of the Dodd-Frank Act has created headaches for companies that import gold. Companies are concerned that the Uyghur Forced Labor Prevention Act could create similar problems, according to the lawmakers.

Because China has transferred Uighur Muslims out of Xinjiang to work in other parts of the country, human rights advocates say it may be difficult for any U.S. company operating in China to ensure it isn’t benefiting, even indirectly, from forced labor.

Xinjiang, which borders Pakistan and Afghanistan, was conquered by China in the 1700s, and the Turkic Muslims who live there have long fought against Chinese rule. But in recent years, the Chinese government has been cracking down on Muslims, aided by advanced surveillance technology, such as artificial intelligence and facial recognition, a digital iron grip that has overwhelmed the population.

With an estimated 1 million to 2 million people placed in camps, human rights groups have called the situation in Xinjiang a cultural genocide. Some of those who “graduate” from the camps by renouncing Islam and learning to speak fluent Mandarin have been moved to factories in Xinjiang and surrounding regions.

China’s government has disputed the characterization of the program as “camps,” saying they were vocational training centers to reform minor criminals. Under heavy international pressure, officials declared the end of the program in December 2019, saying all students had successfully graduated. Some of the centers have been confirmed to be vacated, though some overseas Uighurs have said relatives remain detained or missing.

But China has thwarted efforts to observe human rights conditions in Xinjiang. Diplomats and foreign journalists who have visited the region almost universally report being repeatedly detained by authorities and blocked from approaching areas where camps are located. Recent satellite photos show the camps growing, not shrinking.

While it’s unknown how much electronics manufacturing occurs in the region, some human rights groups believe there are plants that make electronics components in Xinjiang. And private companies, which act as brokers for Xinjiang laborers, have arranged for workers to be transferred from concentration camps to electronics factories outside of Xinjiang, according to human rights reports.

A March report from the Australian Strategic Policy Institute identified four alleged instances in which labor from the Xinjiang region has been connected to Apple’s supply chain. The report alleges that the workers were likely to have been forced or coerced, but it did not offer proof confirming the work terms and conditions.

Apple products include thousands of components that are made by suppliers all around the world. The company has a supplier code of conduct and says it assessed 1,142 suppliers in 49 countries in 2019, ensuring that good labor conditions are upheld. Apple publishes an annual progress report documenting the results. “Workplace rights are human rights. We require suppliers to provide fair working hours, a safe work site, and an environment free from discrimination,” the company says on its website.

The Australian report alleges that in 2017, the Chinese government transferred between 1,000 and 2,000 Uighurs to work at a factory owned by O-Film, which helps make selfie cameras for Apple’s iPhone. Apple’s Cook publicized his visit to an O-Film factory in December 2017, posing in a photo in front of a microscope on the factory floor, wearing a blue clean room jumpsuit. “Getting a closer look at the remarkable, precision work that goes into manufacturing the selfie cameras for iPhone 8 and iPhone X at O-Film,” Cook wrote on the Chinese social networking site Weibo.

O-Film also supplies other American companies like Dell, HP, Amazon and General Motors, according to the report. (Amazon chief executive and founder Jeff Bezos owns The Washington Post.) Dell spokesperson Lauren Lee said an O-Film subsidiary is a supplier for the company but that Dell does not do business with the O-Film factory named in the report. Amazon acknowledged the report and denounced forced labor in a statement on its website. General Motors, in its most recent sustainability report, said it investigated the allegations and ended its relationship with the supplier.

A Chinese newspaper article from May 2017 covered the transfer of Uighur labor to the O-Film factory. The article put a positive spin on the story, referring to the alleged forced laborers as “urban and rural surplus laborers” who had “gone out of their homes to work in the mainland to make money, and create a happy life with their hard-working hands.”

The Australian report, citing a local government document from September 2019, alleges that 560 Xinjiang laborers were transferred to the Henan province and that some of those workers ended up in Foxconn’s Zhengzhou factory, otherwise known as “iPhone City,” where half of Apple’s flagship products are assembled.

The report also cites a 2018 speech by a Chinese government official announcing the transfer of workers from Xinjiang to the Hubei Yihong factory, which the report alleges is the parent company of an Apple supplier. According to the report, the factory’s website said it supplied GoerTek, which makes Apple’s AirPods. In the speech, the official referred to the labor transfers as a “green channel” and ordered workers to be “grateful” to the Chinese Communist Party.

“Xinjiang migrant workers must regard the factory as their home and strive to be outstanding employees,” the official said. The factory also allegedly supplies other American electronics makers like Facebook’s Oculus, Microsoft and Google, according to the report. GoerTek didn’t respond to a request for comment. Frank Shaw, Microsoft’s vice president of corporate communications, said the company “determined that O-Film and Hubei Yihong are not suppliers for our devices nor for our cloud hardware businesses.” He added that Microsoft investigated alleged labor violations at Foxconn but found no wrongdoing. “We do not tolerate forced labor in our supply chain,” he said.

The Australian report also cites a 2018 article from Xinjiang Economic News, which reported that 544 Uighur students were transferred to a subsidiary of Highbroad Advanced Material, a maker of LCD and OLED components. The report alleges that Highbroad is a supplier of BOE Technology Group, a maker of OLED screens for Apple, according to Apple’s supplier list. BOE didn’t respond to a request for comment.

In August, the Tech Transparency Project uncovered shipping records showing Apple was importing cotton T-shirts from a company in Xinjiang that Congress imposed sanctions on for its alleged use of forced labor. Apple, at the time, said it does not currently import shirts from the region.

“I’m not entirely surprised that Apple would be involved in trying to water down legislation that concerns protection of human rights in China,” said Maya Wang, a China researcher at Human Rights Watch. Nevertheless, she called Apple’s lobbying effort “unconscionable.”

Eva Dou contributed to this report.